A 30-year-old male was admitted to the hospital with chief complaint of infertility for 3 years. The patient reported that he could not ejaculate in an antegrade direction after puberty when he reached sexual climax, as displayed in Figure 1. There was no semen expulsed from the urethral meatus. Midodrine hydrochloride 2.5 mg three times daily for one month prescribed by a local hospital didn’t restore normal ejaculation. And midodrine hydrochloride discontinued because the patient was anxious to influence of sperm quality affected by medicine. Sperm has been retrieved in the urine after ejaculation with sodium bicarbonate orally taken. Four embryos fertilized by intracytoplasmic sperm injection developed well until transplantation. Two embryos at a time were transplanted once and again, but none survived. The local reproductive center confirmed that his spouse preserved full capacity of fertility. For further treatment, the patient visited and was admitted to our hospital. The patient denied the past history of diabetes, surgery, trauma, or mental disorders. 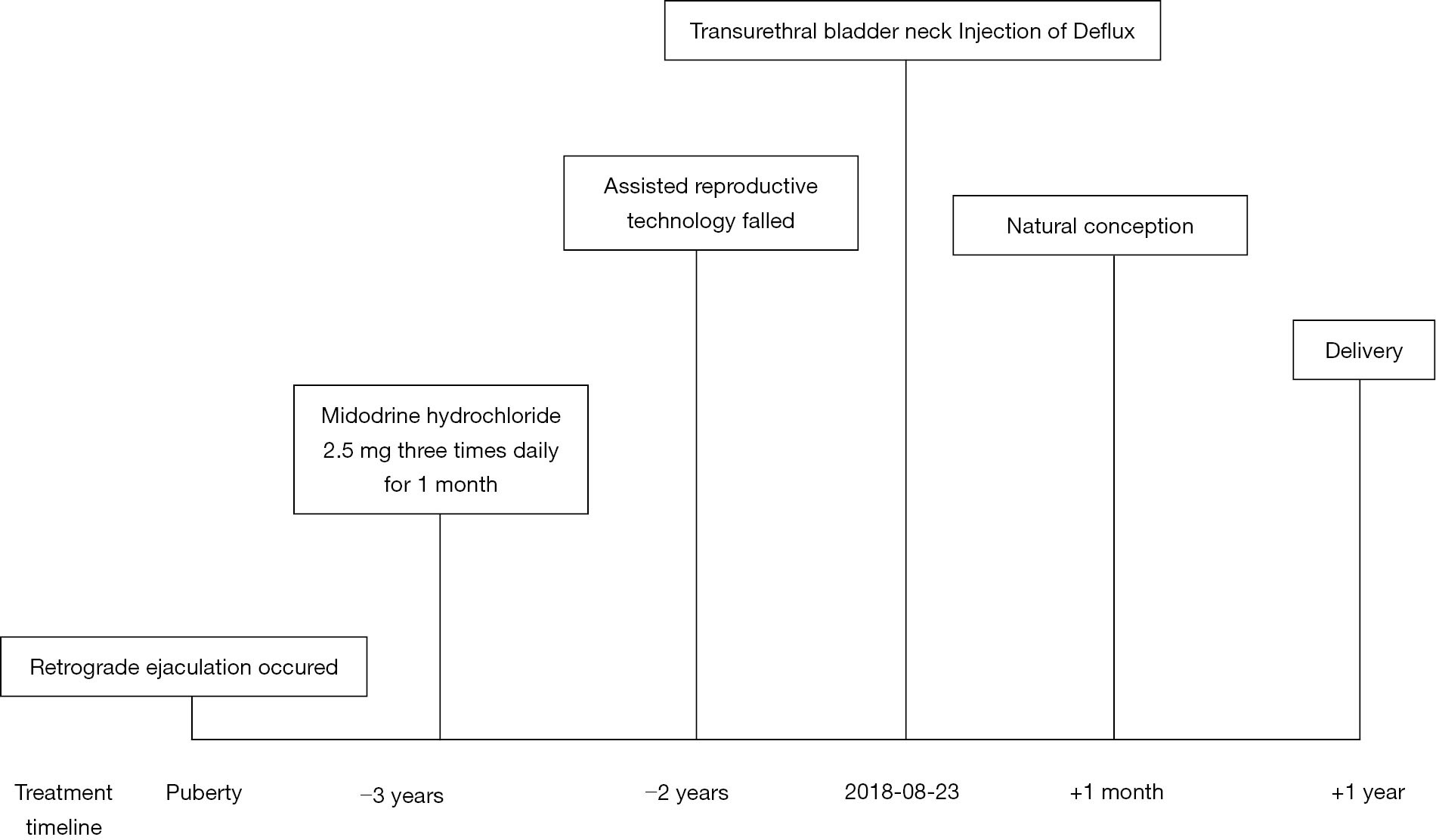 Physical examination indicated no obvious structural abnormality of the external genitalia. Normal parameters have been detected in blood routine, blood biochemistry, reproductive hormones. Real-time transrectal ultrasound indicated semen was retrogradely ejaculated into the bladder after emission, as was seen in Figure 2A.

Figure 2 Preoperative ultrasound image and operative image. (A) Semen was ejaculated into the bladder under transrectal ultrasound. (B) Transurethral bladder neck injection of Deflux.

According to the published articles, injection of Deflux, a viscous collagen, to the bladder neck may restore antegrade ejaculation for the patients with retrograde ejaculation. The patient received transurethral bladder neck injection of Deflux with informed consent and comprehensive communication to the surgeons before the surgery, as was seen in Figure 2B. A total of two mL Deflux was injected equally into the bladder neck at clock positions of 2, 4, 6, 8 and 10 o’clock under cystoscopy in 5 minutes. The needle tip was completely immersed into the submucosa. Mucosal bulge was observed during injection. In case of urinary retention, a urinary catheter was placed and removed one day later. In follow-up of 18 months, the patient converted to antegrade ejaculation with high satisfaction 1 month after the surgery without lower urinary tract symptoms or other complications. Natural conception of the spouse occurred one month after the surgery.

In conclusion, transurethral bladder neck injection of collagen or Deflux for retrograde ejaculation is in an exploratory stage. Although there is a successful case report, randomized controlled trials in large sample size are needed to further evaluate the treatment.

Reporting Checklist: The authors have completed the CARE reporting checklist. Available at http://dx.doi.org/10.21037/tau-20-593

Conflicts of Interest: All authors have completed the ICMJE uniform disclosure form (available at http://dx.doi.org/10.21037/tau-20-593). The authors have no conflicts of interest to declare.