Kidney transplantation is currently the best available therapy to prolong the life of patients with end-stage renal disease (1). The primary postoperative goal is to maintain good graft function on the basis of effective prevention of infection (2). The early stage after kidney transplantation, that is, the first month after operation, is the peak stage for infectious complications (3), 45–72% of which are urinary tract infections (UTIs) (2), which have an incidence rate of 6–86% (4). UTIs can prolong the recipient’s hospital stay, increase medical expenses, and, in severe cases, lead to graft failure or even threaten the recipient’s life (5).

We retrospectively analyzed patients undergoing kidney transplantation between January 2018 and December 2019 in a first-class tertiary hospital in Suzhou, China, by convenience sampling. Inclusion criteria: patients were ≥18 years old and were within one month after kidney transplantation. Exclusion criteria: patients with incomplete data, patients with confirmed UTI before transplantation, and patients undergoing multiorgan transplantation. This study was approved by the medical ethics committee of the First Affiliated Hospital of Soochow University, and the approval number was No. 2020-187. All procedures performed in this study involving human participants were in accordance with the Declaration of Helsinki (as revised in 2013). Individual consent for this retrospective analysis was waived.

The urine of the recipient after kidney transplantation was collected for monitoring once per day for the first two weeks and then once every Monday, Wednesday, and Friday until discharge. Standard procedures were strictly followed when collecting urine samples (2). The detailed UTI diagnostic criteria were as follows: the patient had symptoms of the urinary tract, including frequent urination, urinary urgency, and dysuria, or tenderness in the lower abdomen or percussive pain in the kidney region, with or without fever, and had one of the following: (I) urine white blood cell count ≥10/high-power field in females or ≥5/high-power field in males; (II) gram-positive cocci ≥104 colony-forming units (CFU)/mL and gram-negative bacilli ≥105 CFU/mL from the culture of the clean middle part of the urine or urine collected from the urethral catheter; (III) gram-positive cocci ≥104 CFU/mL and gram-negative bacilli ≥105 CFU/mL from urine culture of asymptomatic bacteriuria patients with a recent (1-week) history of endoscopy or indwelling urethral catheterization; (IV) the patient was clinically diagnosed with UTI or was confirmed with UTI due to effective anti-bacterial treatment (2).

Two researchers who underwent the same training independently screened the medical records according to the inclusion and exclusion criteria and collected and recorded relevant data. Differences between the two researchers were discussed and resolved together or by consulting a third party.

General data of the subjects

This study included 129 recipients, including 85 males (65.9%) and 44 females (34.1%) with an age range of 18–64 years (41.88±10.75). Their primary diseases included 20 cases of glomerulonephritis, 11 cases of diabetic nephropathy, five cases of hypertensive nephropathy, 20 cases of IgA nephropathy, five cases of polycystic kidney, and 68 unknown diseases. All recipients were transplanted for the first time, and the source of the kidney was Donation after Citizen's Death (DCD). Preoperative panel-reactive antibody (PRA) was negative. A urethral catheter and D-J stent were placed during surgery. In the perioperative stage, methylprednisolone + anti-thymic lymphocyte immunoglobulin/Simulect/thymoglobulin immune induction regimen was used. A triple immunosuppressive regimen of mycophenolate mofetil + tacrolimus/cyclosporin A + prednisone was used after operation. Second- and third-generation cephalosporin were used for postoperative infection prevention. 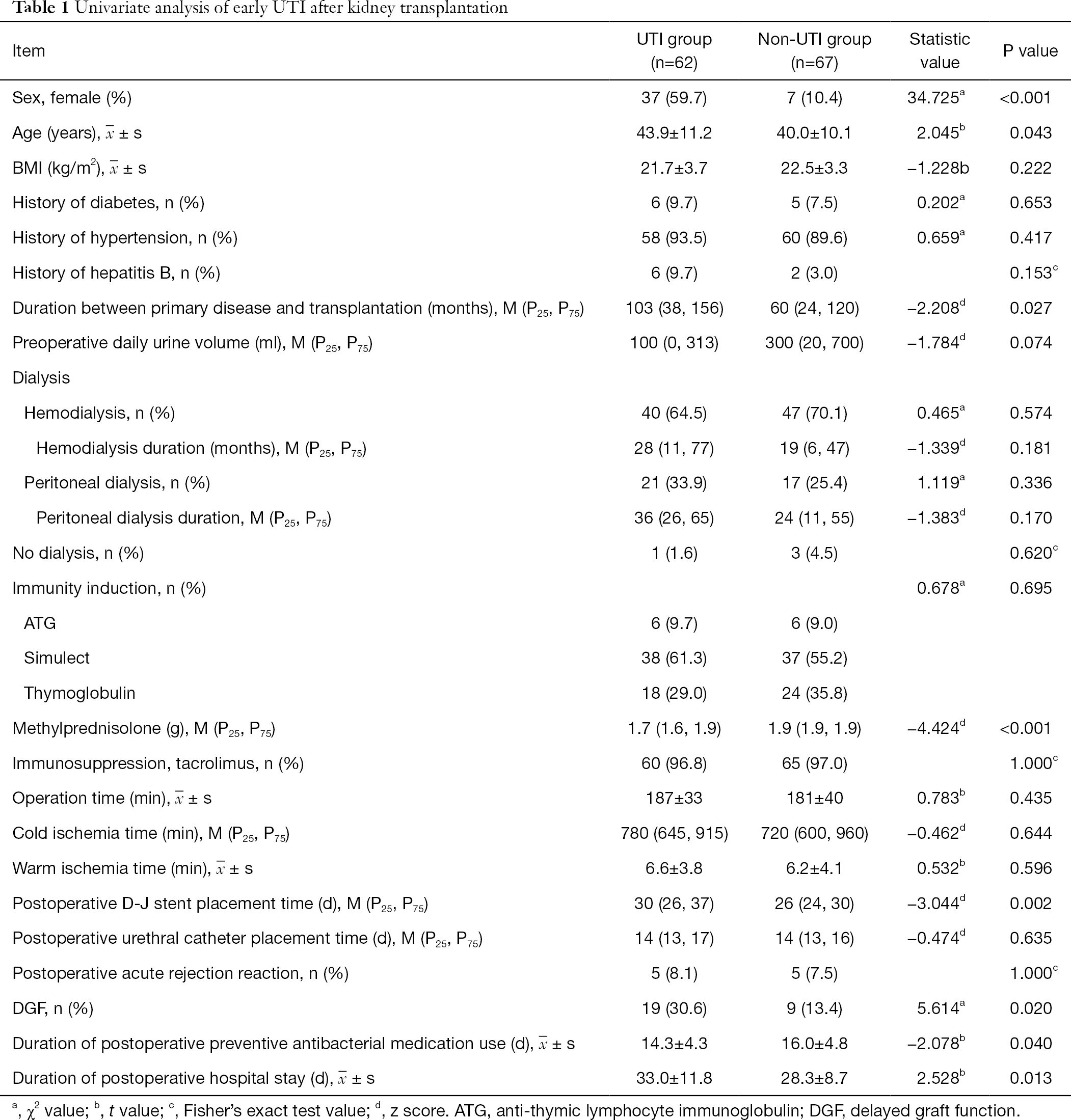 To avoid excluding factors that were not statistically significant in univariate analysis but that could be significant in multivariate analysis, we included all the factors with P≤0.1 in univariate analysis in the logistic regression model (9). These totaled nine independent variables. The regression results showed that female sex and DGF were statistically significant risk factors, with χ2=54.285, P<0.001 (Table 2). This model could accurately predict 81.4% of recipients who would have early UTI after kidney transplantation, with a sensitivity of 86.6%, a specificity of 75.8%, a positive predictive value of 83.9%, and a negative predictive value of 79.5%.

Incidence and occurrence time of early UTI after kidney transplantation

The incidence of UTI among kidney transplantation recipients is higher than that of the general population, and more than 50% of women, especially postmenopausal women, have at least one UTI in their lives (14). Our study showed that the incidence of early UTI after kidney transplantation among female recipients was higher than that among male recipients, which is consistent with the study by Fiorant et al. (15). The logistic regression analysis in our study showed that female sex was a risk factor for early UTI after kidney transplantation. In a retrospective cohort study with 99 recipients, Menegueti et al. (11) found that the only risk factor associated with UTI after kidney transplantation was female sex. Another study showed that the incidence of UTI among postmenopausal female recipients was higher than among nonmenopausal women (16). The reasons for these findings may be following: (I) the female urethra is short and close to the anus, so it is easily affected by the intestinal flora, such as E. coli, leading to retrograde infection (12). The pathogen with the highest frequency in our study was E. coli, accounting for 63.6%, which is similar to the results of related studies (17). (II) The differences between male and female urine proteomic patterns, as found recently, may also affect urinary bacterial proliferation and inflammatory processes (18). (III) Estrogen can promote the differentiation and keratinization of vaginal epithelial cells, increase glycogen and its decomposition in epithelial cells, and keep the environment of the vagina acidic. Reduced estrogen after menopause changes the acidic environment of the vagina. The dominant flora changes from lactic acid bacteria to E. coli. As a result, the original infection-protection mechanism is weakened (15). The following prevention and control measures can be taken based on the above possible reasons: The recipient can be instructed to flush the perineum with benzalkonium bromide, and any infections should be treated quickly. After the operation, the urethral orifice should be cleaned every day with benzalkonium bromide, and the perineum should be rinsed after each bowel movement. Additionally, physiological bladder irrigation (drinking water) is highly helpful in the prevention of UTI. Therefore, recipients who can drink water normally should be encouraged to drink more than 2,000 mL of water each day and maintain a urine output of more than 2,000 mL. Continuing nursing services after discharge can also improve the knowledge of kidney transplant recipients about UTI prevention (19).

DGF is a risk factor for early UTI after kidney transplantation

A previous study indicated that DGF increased the risk of early UTI after kidney transplantation (20), which is also confirmed by our study. We showed here that the incidence of UTI among the 28 patients with DGF was 67.9%. The detailed mechanism by which DGF impacts the occurrence of UTI is not clear. Some studies suggest that recipients with DGF require longer to recover their graft function, and their longer hospital stay increases the chance that the recipient will come into contact with pathogenic bacteria in the hospital. When recipients with DGF come in contact with pathogenic bacteria, the bacteria attach to the urothelium through adhesion factors. Due to the low urine output and poor immune function of the recipient, pathogenic bacteria can easily enter and stimulate the bladder through the urethra, which causes cystitis. If the pathogenic bacteria continue to move up the ureter, they may cause acute pyelonephritis (21). Some scholars (20) also believe that recipients with DGF usually have prolonged immune induction times with polyclonal antibodies as well as a greater amount of antibodies, and polyclonal antibodies are an important cause of infections among kidney transplant recipients. Therefore, if DGF recipients have fever, multiple urine cultures should be performed to eliminate the possibility of UTI, in addition to lung computed tomography and sputum culture examinations.

This study only selected 129 recipients from one first-class tertiary hospital after kidney transplantation. These patients were similar in some ways. For example, the recipients all underwent their first transplantation, all were PRA-negative, and all the donor kidneys were from DCD, which may have caused some biases in our findings. Therefore, multicenter and larger studies are required to confirm our findings. Second, this was a retrospective study. Some UTI data, such as the etiological results of the donors, the urinary tract obstruction status of the recipients, and whether the female recipients were menopausal, may have been incomplete. Therefore, the influencing factors included in this study are limited in usefulness, and the impact of some other factors on early UTI might have been neglected. Prospective studies are needed for more detailed insight.

Reporting Checklist: The authors have completed the STROBE reporting checklist. Available at http://dx.doi.org/10.21037/tau-20-1248

Conflicts of Interest: All authors have completed the ICMJE uniform disclosure form (available at http://dx.doi.org/10.21037/tau-20-1248). The authors have no conflicts of interest to declare.

Ethical Statement: The authors are accountable for all aspects of the work in ensuring that questions related to the accuracy or integrity of any part of the work are appropriately investigated and resolved. This study was approved by the medical ethics committee of the First Affiliated Hospital of Soochow University (approval No. 2020-187). All procedures performed in this study involving human participants were in accordance with the Declaration of Helsinki (as revised in 2013). Individual consent for this retrospective analysis was waived.