The interaction between host and gastrointestinal microbial communities is involved in many aspects of carcinogenesis (1). Our commensal community can define the efficacy and toxicity of anticancer therapies through a large suite of chemical signaling pathways (2,3). Numerous studies have emerged providing evidence of the relationship between gut microbiota and cancer treatment. One research led by Viaud et al. using a murine sarcoma model proved that germ-free or bacteria-deprived mice showed resistance to cyclophosphamide treatment (4). The authors continuously found a specific set of bacteria e.g., Lactobacillus murinus and Enterococcus hirae that can stimulate type 17 T helper (TH17) cell and type1 T helper (TH1) cell responses, and restore the antitumor efficacy of cyclophosphamide. Bifidobacterium spp. is found to correlate with antitumor T-cell responses, Sivan et al. found with a murine melanoma model that oral administration of Bifidobacterium can strengthen the antitumor efficacy of anti-PD-L1 (5). Gut microbiota has also been demonstrated to associate with therapeutic efficacy of anti-CTLA-4, camptothecin, 5-fluorouracil, and cytosine-phosphate-guanosine oligodeoxynucleotides (CpG-ODN) (6-8). And its anticancer effects have been successfully corroborated with clinical studies. Transfer of chemotherapeutic response has been achieved by administrating human feces into murine, and the benefits of specific microbials in progression-free survival rates have been identified among patient cohorts (9-11).

The relationship between gut microbiota and prostate cancer (PCa) progression is largely unknown. Androgen deprivation therapy (ADT), also referred to hormone therapy is still the first-line therapeutic approach for PCa management, it lowers serum testosterone to castrate level and decreases the prostate-specific antigen (PSA) value to suppress cancer progression. ADT can be achieved by orchidectomy, luteinizing hormone-releasing hormone agonist (LHRHa) monotherapy, or combined LHRHa with anti-androgen agents (12). However, though ADT is initially successful, most patients may eventually experience biochemical relapse and progress to castration-resistant prostate cancer (CRPC). We hypothesize that gut microbiota may interact with ADT in the process of CRPC, particularly orally administered hormone therapies. ADT may promote the changes in microbiota, and microbiota in turn modulates the ADT efficacy. Here, we reported the first study of the compositional differences in gut microbiota that were examined from the same patients before and after ADT with eventual progression to CRPC, aiming to understand the potential role of gut microbiota in PCa progression and management. We present the following article in accordance with the MDAR reporting checklist (available at http://dx.doi.org/10.21037/tau-20-566).

All procedures performed in this study were in accordance with the Declaration of Helsinki (as revised in 2013) and approved by the institutional review board of Huashan hospital, Fudan University (reference number 2020-531). Informed consent was obtained from all individual participants included in the study. Clinical database of Department of Urology between Mar 2016 and Nov 2019 were searched with inclusion criteria as follows: (I) patients who were confirmed as PCa by histopathology evaluation; (II) patients who received ADT after initial diagnosis, with or without radical prostatectomy; (III) patients who were clinically diagnosed as CRPC. CRPC is defined as castrate serum testosterone (<50 ng/dL or 1.7 nmol/L) plus one of the following progressions: (I) biochemical progression: three consecutive rises in PSA 1 week apart, resulting in two 50% increases over the nadir, and PSA >2 ng/mL; (II) radiologic progression: the appearance of new lesions, either two or more new bone lesions or a soft tissue lesion (13). Men were excluded if they took antibiotic within 30 days of fecal collection, had a history of gastrointestinal diseases, or received other forms of hormonal or systemic therapy before enrollment. Eventually, 21 patients were enrolled, their clinical characteristics were collected. Paired feces were gathered at initial diagnosis before ADT, and at CRPC after ADT.

Fecal samples were collected by patients using a sterile “feces tube” with screw cap. The tube contains a spoon that is fixed to the cap and projects down the tube. Fresh feces were immediately stored frozen at –20 °C after production and then were transferred to –80 °C until used.

Sequencing data were processed using QIIME 1.8.0 package (14). Raw sequencing reads with exact matches to the barcodes were identified as valid sequences and assigned to respective samples. Sequences were excluded from analysis if they (I) were <150 nucleotides in length, (II) had average Phred scores of <20, (III) contained ambiguous bases or mononucleotide repeats of >8 bp. The sequences were assembled, and delineation of operational taxonomic units (OTUs) was conducted with UCLUST at a 97% cutoff (15). A representative sequence was selected from each OTU and subjected to BLAST to assign the taxonomic classification using the Greengenes database. Alpha and Beta diversity were calculated to indicate the richness and structure of microbial communities. LEfSe analysis was performed on http://huttenhower.sph.harvard.edu/galaxy to identify differentially abundant taxa with both statistical significance and biological relevance (16). Microbial functions were predicted by PICRUSt (17).

Clinical characteristics of the 21 patients was displayed (Table 1). We first determined the compositional differences in microbiome before [hormone-sensitive prostate cancer (HSPC)] and after ADT (CRPC). The community richness (Chao1) index of CRPC and HSPC were 913.80±359.36 and 842.39±360.29 (P=0.524), respectively. No significant differences were found. The average relative abundance of bacteria at phylum and genus levels were analyzed (Figure 1A). At the phylum level, CRPC had increased abundance of Bacteroidetes (28.04% vs. 24.59%), Fusobacteria (2.17% vs. 0.11%), Synergistetes (1.80% vs. 0.01%), Tenericutes (0.085% vs. 0.010%) and decreased abundance of Proteobacteria (6.12% vs. 11.76%), Actinobacteria (4.37% vs. 6.03%), and Cyanobacteria (0.006% vs. 0.013%). The Beta diversity, performed with principal co-ordinates analysis (PCoA) methods based on weighted UniFrac distance, showed no identifiable microbiota clusters between the two cohorts (Figure 1B). Though samples from the two groups did not cluster by their overall microbial composition, several biologically significant abundance differences were identified with LefSe analysis. As shown in Figure 1C, CRPC had increased abundance of 14 phylotypes, including class Betaproteobacteria, its order Betaproteobacteria, family Alcaligenaceae, Oxalobacteraceae, Comamonadaceae, Burkholderiaceae, genus Burkholderia, Cupriavidus, Sutterella; family Microbacteriaceae and its genus Agromyces; family Methylobacteriaceae; genus Phascolarctobacterium and Ruminococcus. The microbial functional inference analysis was performed with PICRUSt. We identified 11 KEGG pathways that were differentially abundant between the two cohorts. CRPC was enriched of pathways including terpenoids and polyketides metabolism, ether lipid metabolism, clavulanic acid biosynthesis, endocrine and excretory system, etc. (Table 2). 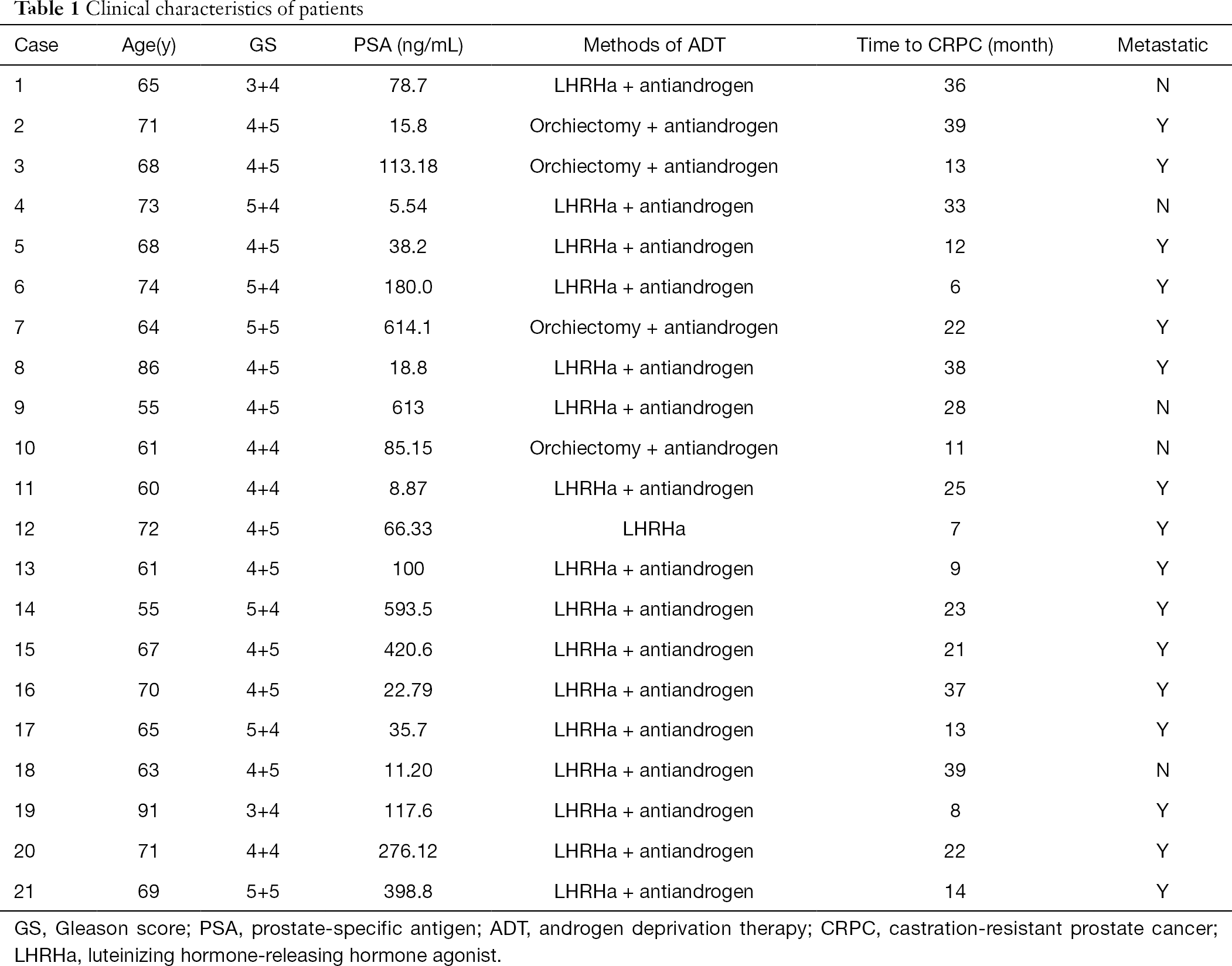 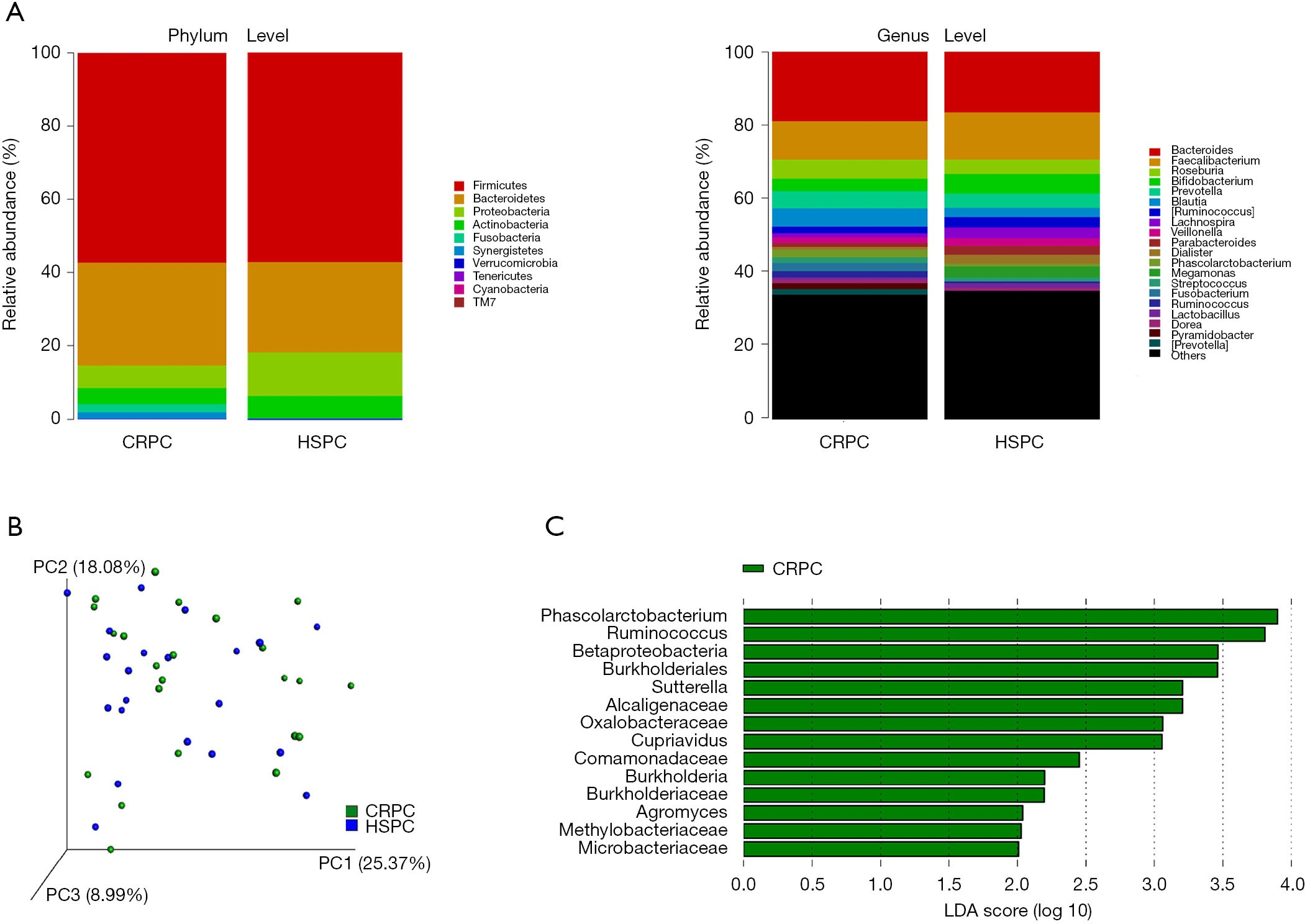 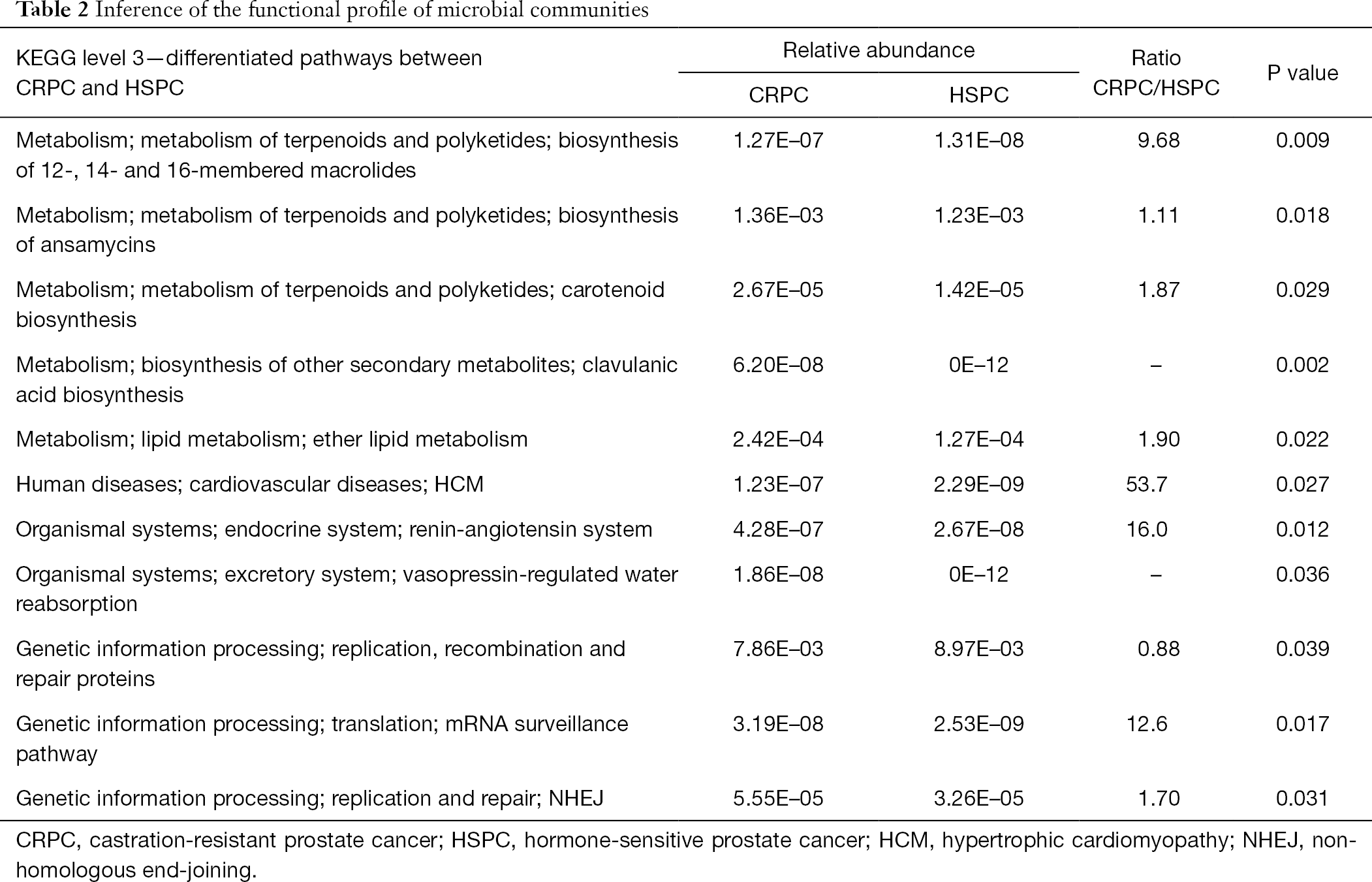 In the present study, we have characterized for the first time the compositional differences in microbiota in matched HSPC and CRPC. CRPC harbored an altered composition of gut microbiome that was characterized by a significantly increased abundance of several microbial floras. We speculate that ADT may alter the patients’ gut microbiota, and the altered microbiota may conversely influence clinical responses to ADT and modulate the antitumor efficiency.

The microbial community structure altered from HSPC to CRPC, including increased abundance of phylum Bacteroidetes and Fusobacteria. Golombos et al. compared the gut microbiome of men with PCa or benign prostatic conditions, and found that Bacteroides massiliensis was significantly increased in cancer cases (18). Similar results were also confirmed in Liss’s study who performed 16S rRNA sequencing on rectal swab samples of 64 PCa and 41 non-cancer, and revealed that Bacteroides and Streptococcus species were enriched in cancer status (19). But in this study, we demonstrated that Bacteroidetes also has a role in PCa progression. Fusobacterium has been demonstrated its pro-tumorigenic role in colorectal cancer, it is persistently associated with distant metastases (20). Increased expression of Bacteroidetes and Fusobacteria were also found in patients with lung cancer (21).

Several key phylotypes that identified in CRPC have been proved to be associated with PCa progression. Genus Ruminococcus was over-expressed in CRPC, Ruminococcus is positively correlated with glutamate (22), which is extensively involved in tricarboxylic acid cycle and lipogenesis that are biologically relevant in prostate carcinogenesis and castrate-resistant progression (23). Koochekpour et al. found that glutamate deprivation could induce apoptosis in both androgen-stimulated and androgen-independent PCa cells. The serum glutamate levels were significantly higher in Gleason score (GS) ≥8 than in the GS ≤7, and in metastatic CRPC (mCRPC) patients than those with primary PCa (24). Phascolarctobacterium is known as acetate producer (25), it was also found to be elevated in CRPC. Acetate functions as a nutritional source for tumors, and has been proved to be implicated in the growth of hepatocellular carcinoma, breast cancer and PCa (26). In a recent study that examined the gut microbiome in epilepsy patients, Ruminococcus and Phascolarctobacterium also expressed higher relative abundance in patients with drug-resistant cases (27).

Among the 11 differentiated metabolic pathways, ether lipid metabolism was significantly enriched in CRPC. Ether lipid metabolism is often enhanced in cancer cells and tumors. Dramatic elevation in ether lipid contents has been correlated with the tumor growth and aggressiveness (28). Non-homologous end-joining (NHEJ) repair pathway was also activated in CRPC. NHEJ is the most efficient DNA double strand break (DSB) repair pathway that works through the entire cell cycle phase. Zhang et al. found that inhibition of androgen receptor in PCa cell lines could downregulate DNA-repair gene DNA-dependent protein kinase catalytic subunit (DNA-PKcs) expression and reduce NHEJ repair (29). Besides, NHEJ was also upregulated in hepatocellular and pancreatic carcinoma (30,31). Since PICRUSt only provides an indication of genetic potential, approaches such as metagenomics or metatranscriptomics are further required to ascertain the true functional activities of these gut microbial communities.

There are several limitations to our study including the relatively limited sample population, larger population is required to make sure the results were reproducible. Also, we are unable to account for changes in gut microbiome due to dietary or lifestyle factors. Finally, though we found altered gut microbiota in patients after ADT, the effects of these altered microbiota on ADT responses need further investigations.

In conclusion, our study provides preliminary evidence that gut microbiome is significantly altered between matched HSPC and CRPC. We found that ADT altered the composition of gut microbiota, and the microbiota in turn may influence the outcome of hormone therapy. Thus, functional validations are further needed to determine the underlying mechanism of these differentiated microbial communities in the process of CRPC, and their potential role to be treated as new targets to enhance ADT responses.

Funding: This study was supported by the National Natural Science Foundation of China, grant number: 81872102.

Reporting Checklist: The authors have completed the MDAR reporting checklist. Available at http://dx.doi.org/10.21037/tau-20-566

Conflicts of Interest: Both authors have completed the ICMJE uniform disclosure form (available at http://dx.doi.org/10.21037/tau-20-566). The authors have no conflicts of interest to declare.

Ethical Statement: The authors are accountable for all aspects of the work in ensuring that questions related to the accuracy or integrity of any part of the work are appropriately investigated and resolved. All procedures performed in this study were in accordance with the Declaration of Helsinki (as revised in 2013) and approved by the institutional review board of Huashan Hospital, Fudan University (reference number 2020-531). Informed consent was obtained from all individual participants included in the study.