Renal cell carcinoma (RCC) is a common malignant tumor of the urinary system. An estimated 330,000 patients worldwide are diagnosed with RCC each year, and 140,000 patients die of this disease (1). The main treatment for RCC is a combination of surgery, conventional radiotherapy, and chemotherapy, but the results are inadequate (2), and distant metastases cause the condition of RC patient as to deteriorate. Targeted therapy has improved the patient survival rate, but due to high levels of drug resistance in the tumor cells, development is limited. Therefore, it is still necessary to find effective drugs with minimal side effects in the treatment of RCC.

Vitexin (apigenin-8-CD-glucopyranoside) is a bioactive flavonoid isolated from millet, fenugreek, and other traditional plants (3). Multiple studies have shown that vitexin has antioxidant (4), anticancer (5), anti-inflammatory (6), and antidiabetic effects (7). Vitexin extracted from Colocasia esculenta Linn leaves has shown weak diuretic activity in hypertensive rats with renal artery occlusion (8). However, the effect of vitexin on RCC and its related molecular mechanism have not been established.

Autophagy plays an important role in cell proliferation and apoptosis, and autophagy dysfunction can lead to the accumulation of damaged proteins and the damage of developmental genes. Autophagy is involved in the development of tumors such as skin cancer, gastric cancer, prostate cancer, and RCC (9). Vitexin 6 enhances autophagy and induces apoptosis in breast, colon, lung, bladder, and leukemia cells by activating the c-Jun N-terminal kinase (JNK) pathway (10). However, whether vitexin can regulate the occurrence of RCC through autophagy is still unknown.

Mammalian target of rapamycin (mTOR) is a serine/threonine kinase involved in cell proliferation. The mTOR pathway is mainly regulated by phosphatidylinositol 3-kinase/RAC-alpha serine/threonine-protein kinase (PI3K/AKT) (11) and AMPK (12). PI3K/AKT can induce the activation of mTOR Complex 1 (mTORC1), which has a negative regulatory effect on apoptosis (13). Studies report that PI3K/AKT/mTOR plays an important role in apoptosis and autophagy of human prostate cancer and renal cells (14) and that autophagy is regulated by the AMPK/mTOR pathway which is involved in renal ischemia-reperfusion injury and RCC (12).

To date, the molecular mechanism of vitexin and its role in RCC are not clear. In this study, we discuss the role of vitexin in RCC, and study its possible mechanism. Our results suggest that vitexin may be a promising drug for RCC treatment.

We present the following article in accordance with the ARRIVE reporting checklist (available at http://dx.doi.org/10.21037/tau-20-1094).

The cells (1×106) were inoculated into a culture flask (25 cm2). The Click-iTTM 5-ethynyl-2’-deoxyuridine (EdU, Molecular Probes; Invitrogen) solvent was diluted to 20 µM with the corresponding medium. The diluted Edu solvent was added to the flask for 24 h. Then, the cells were fixed with 4% paraformaldehyde for 15 min, stained with Alexa Fluor 594 overnight, cell nuclei were counterstained with DAPI for 20 min, and observed by a fluorescence microscope (Eclipse 80i, Nikon). The results were analyzed using Image-Pro Plus 6.0 software (Media Cybernetics, Inc., USA).

LC3 levels in ACHN cells and OS-RC-2 cells were detected by immunofluorescence assay. Cells were exposed to vitexin (10, 20, and 40 µM) for 24 h. Then, the cells were fixed with 4% paraformaldehyde for 30 min, infiltrated with 0.5% Triton X-100 for another 30 min, and blocked with tris-buffered saline with Tween20 (TBST) containing 5% bovine serum albumin (BSA, Affymetrix, Cleveland, OH, USA) overnight at 37 °C. The sample was hybridized with the primary antibody LC3 (#4108, 1:200, CST, USA) coupled with AlexaFluor® 647 Conjugate secondary antibody overnight at 4 °C (#4414, 1:2,000, CST, USA) and stained with DAPI (1:1,000, catalog number D9564, Sigma-Aldrich) at room temperature for 3 h. The cells are then washed with PBS and observed by confocal microscopy (LSM 510 Meta, Zeiss, Oberkochen, Germany). LC3 spots were calculated from more than 10 microscopic fields.

All animal experiments were performed in accordance with the National Institutes of Health (NIH) Guide for the Care and Use of Laboratory Animals and were approved by Guizhou Medical University. Forty BALB/c nude mice (5 mice per cage, six weeks old, 16–17 g body weight) were purchased from the Animal Center of Guizhou Medical University (Guiyang, China). Mice were housed in controlled conditions at 25±2 °C, 70% humidity, and a 12-h light-dark cycle, with regular sterile chow diet and water. Then, 3.2×106 ACHN cells were subcutaneously inoculated into the right flank of the mice. After successful modeling, the tumor-bearing mice were divided into four groups (n=10) and intraperitoneal injected daily with: saline (Control); vitexin 1 mg/kg/d; vitexin 2 mg/kg/d; and vitexin 4 mg/kg/d. After treatment for 25 days, the mice were sacrificed and the blood and formative tumors were collected for subsequent experiments.

The fixed tumor tissues were paraffin embedded to generate 5-µm sections. Then the rehydration sections were stained with Ki67 and Caspase-3 primary antibodies respectively. The sections were then incubated with secondary antibodies (ABC kit, Vector Laboratories. Burlingame, CA, USA) for 1h at room temperature. The staining was observed with a fluorescence microscope (Olympus, Tokyo, Japan) and analyzed with Image Pro Plus (version 6.0, Media Cybernetics).

Vitexin inhibited the growth of ACHN and OS-RC-2 cells 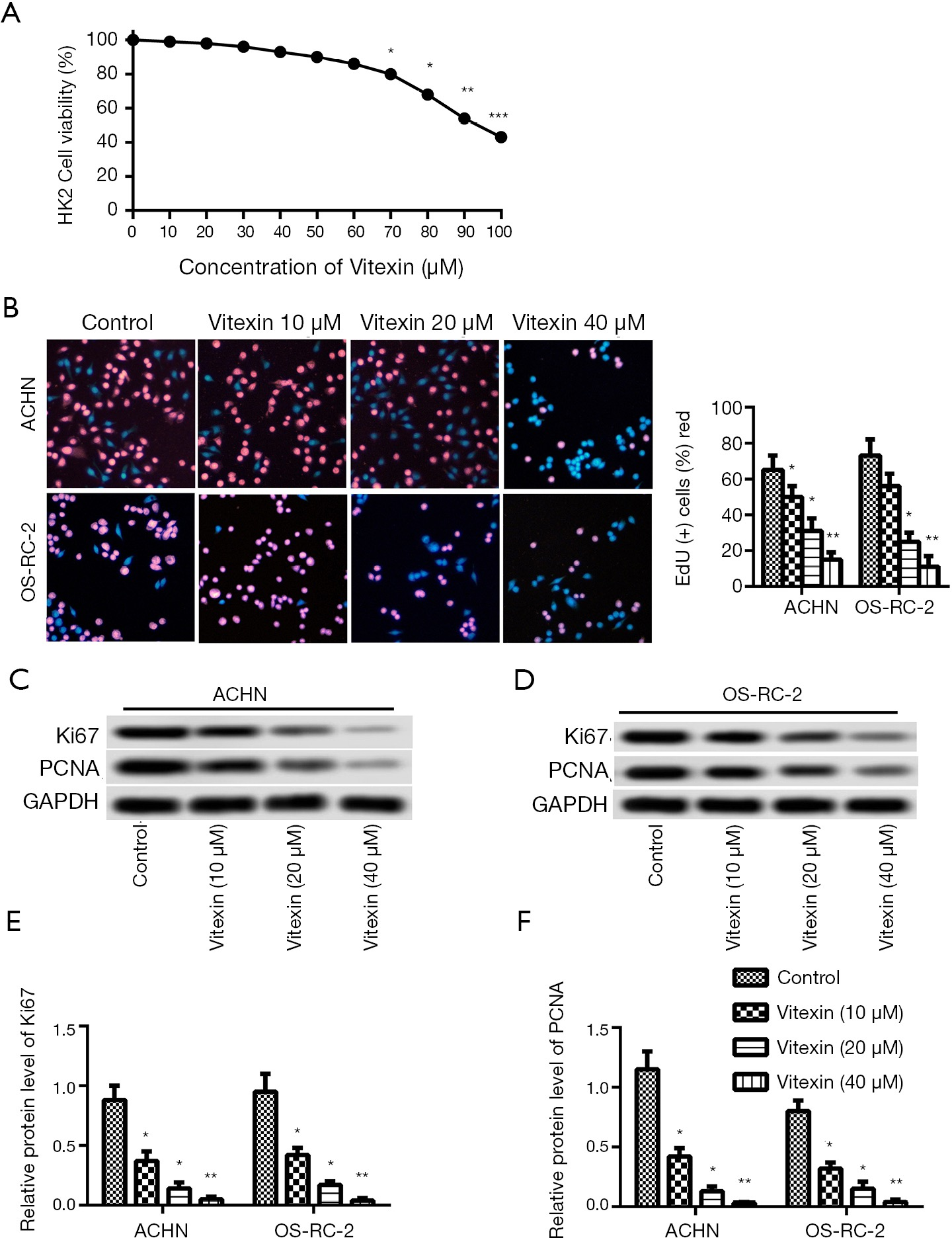 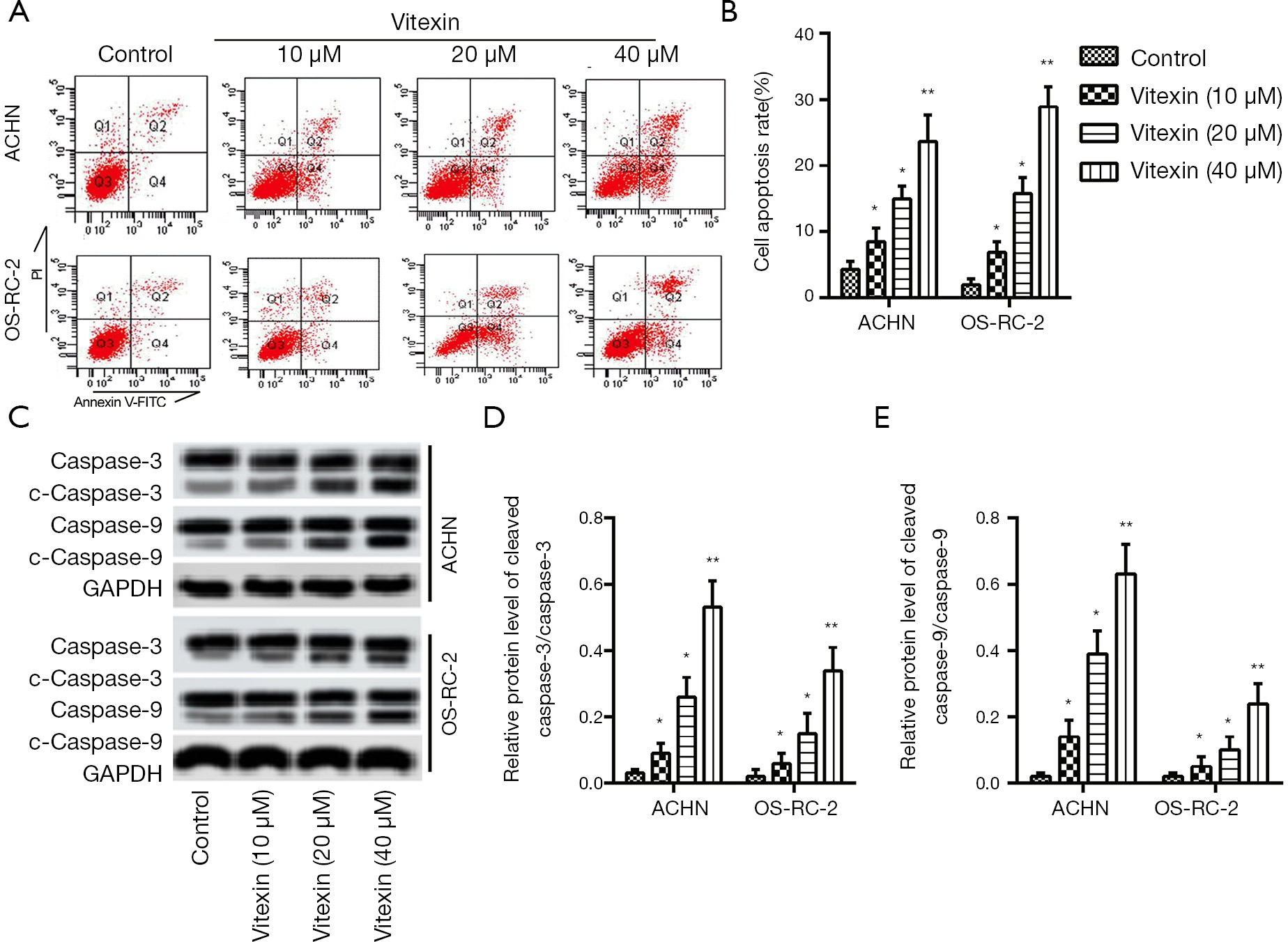 Western blotting and immunofluorescence assay were used to detect the expression of autophagy-related proteins. Immunofluorescence assay showed that LC3 positive spots of ACHN and OS-RC-2 cells were increased in a dose-dependent manner after treatment with vitexin (10, 20 and 40 µM) (Figure 3A,B). In addition, Western blotting indicated that vitexin promoted the expression of Beclin1 and the conversion of LC3-I to LC3-II, and increased the degradation of p62 (Figure 3C). The corresponding protein levels are shown in Figure 3D,E,F. In summary, these results demonstrated that vitexin induced hyperautophagy in ACHN and OS-RC-2 cells. 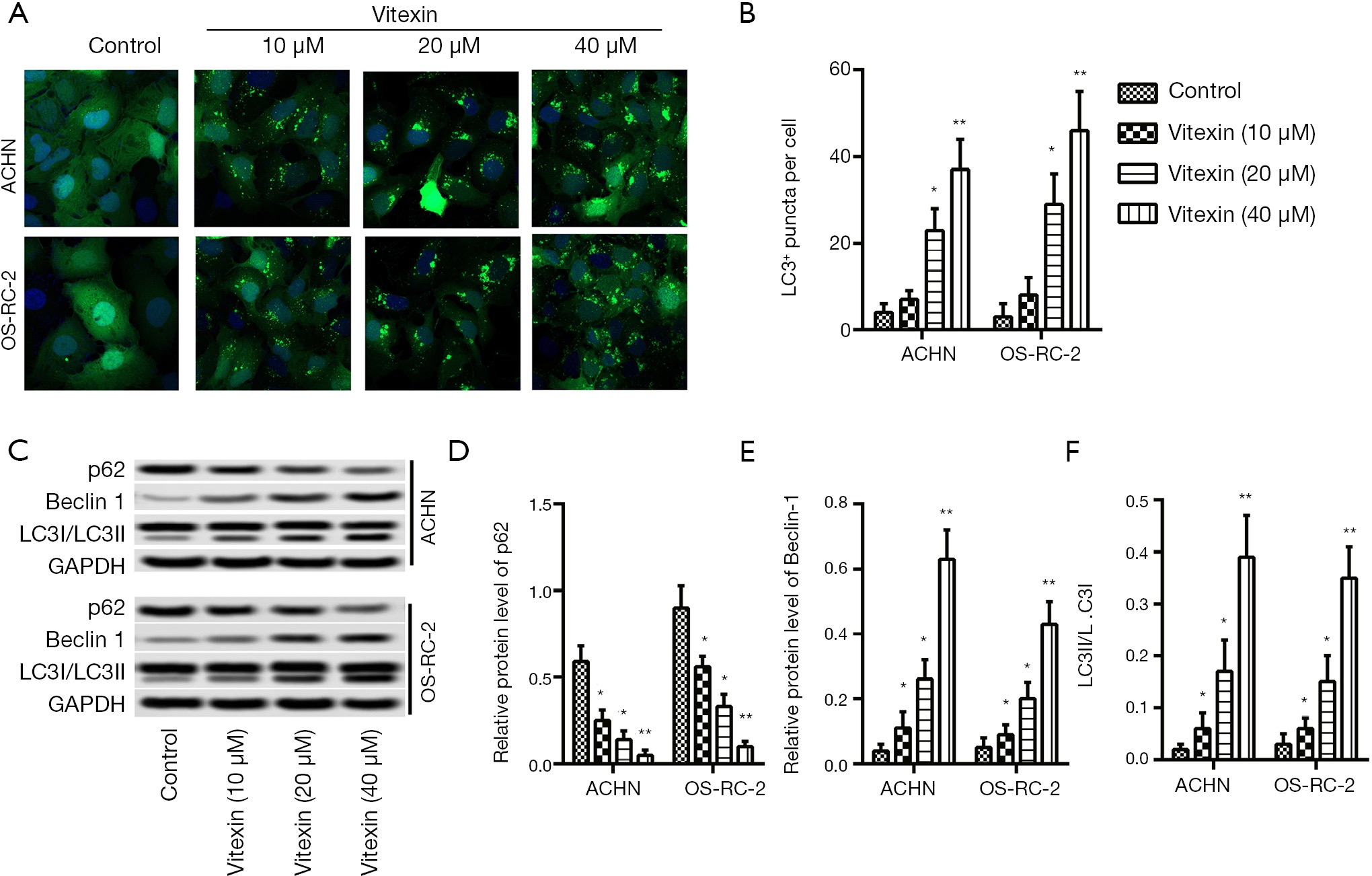 The molecular mechanism of vitexin effect on RCC was studied by Western blotting (Figure 4A). Phosphorylation levels of AMPKα1 and JNK were significantly increased in ACHN and OS-RC-2 cells treated with vitexin (10, 20, and 40 µM), while phosphorylation levels of PI3K, AKT, and mTOR were significantly reduced. The relevant protein levels are shown in Figure 4B,C,D,E,F. Together, these results suggest that vitexin dose-dependently regulates AMPK/mTOR, PI3K/AKT/mTOR and JNK pathways in ACHN and OS-RC-2 cells. 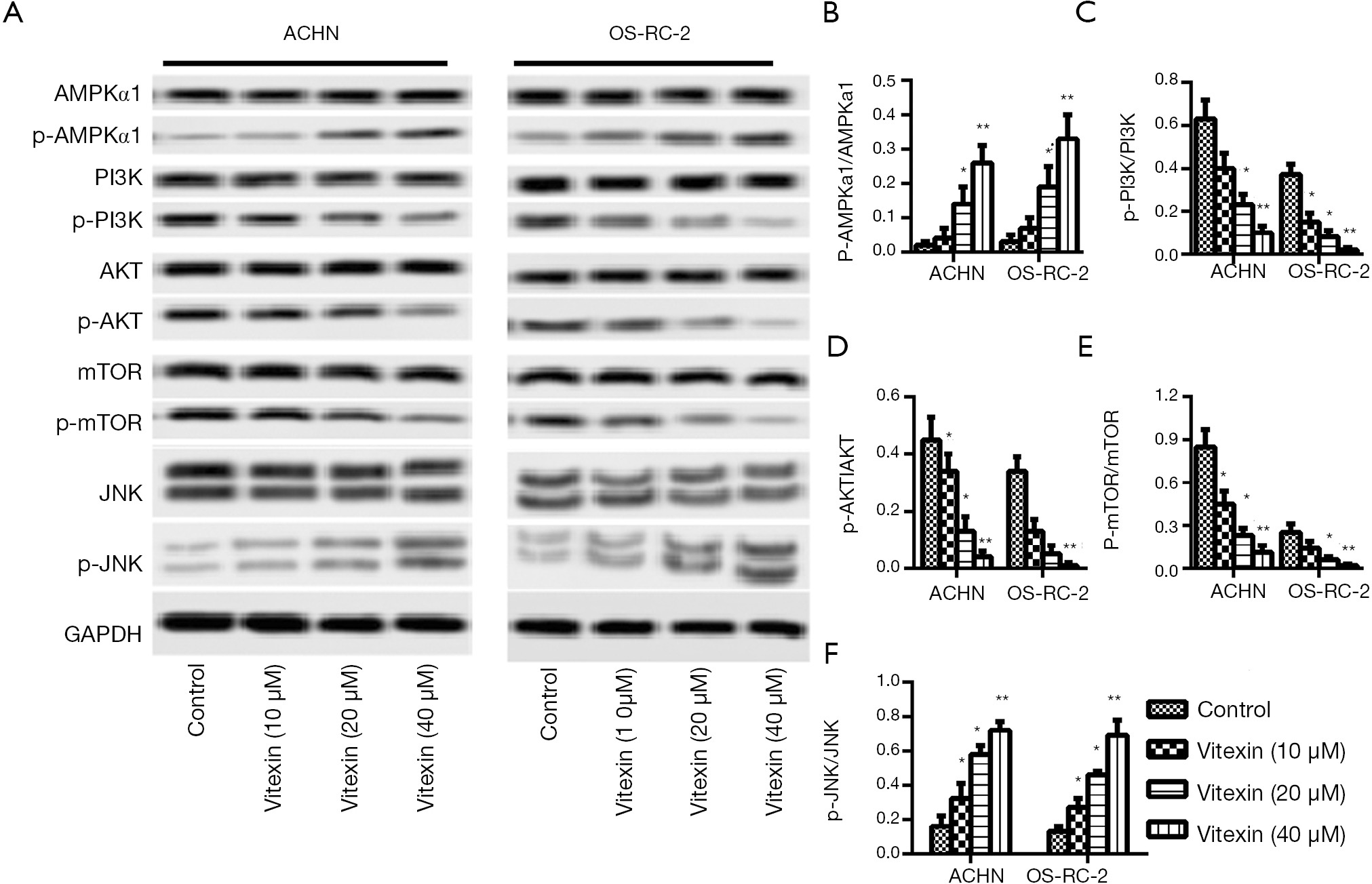 Vitexin inhibited the growth of OS-RC-2 cells and induced apoptosis and hyperautophagy through AMPK/mTOR, PI3K/AKT/mTOR, and JNK pathways 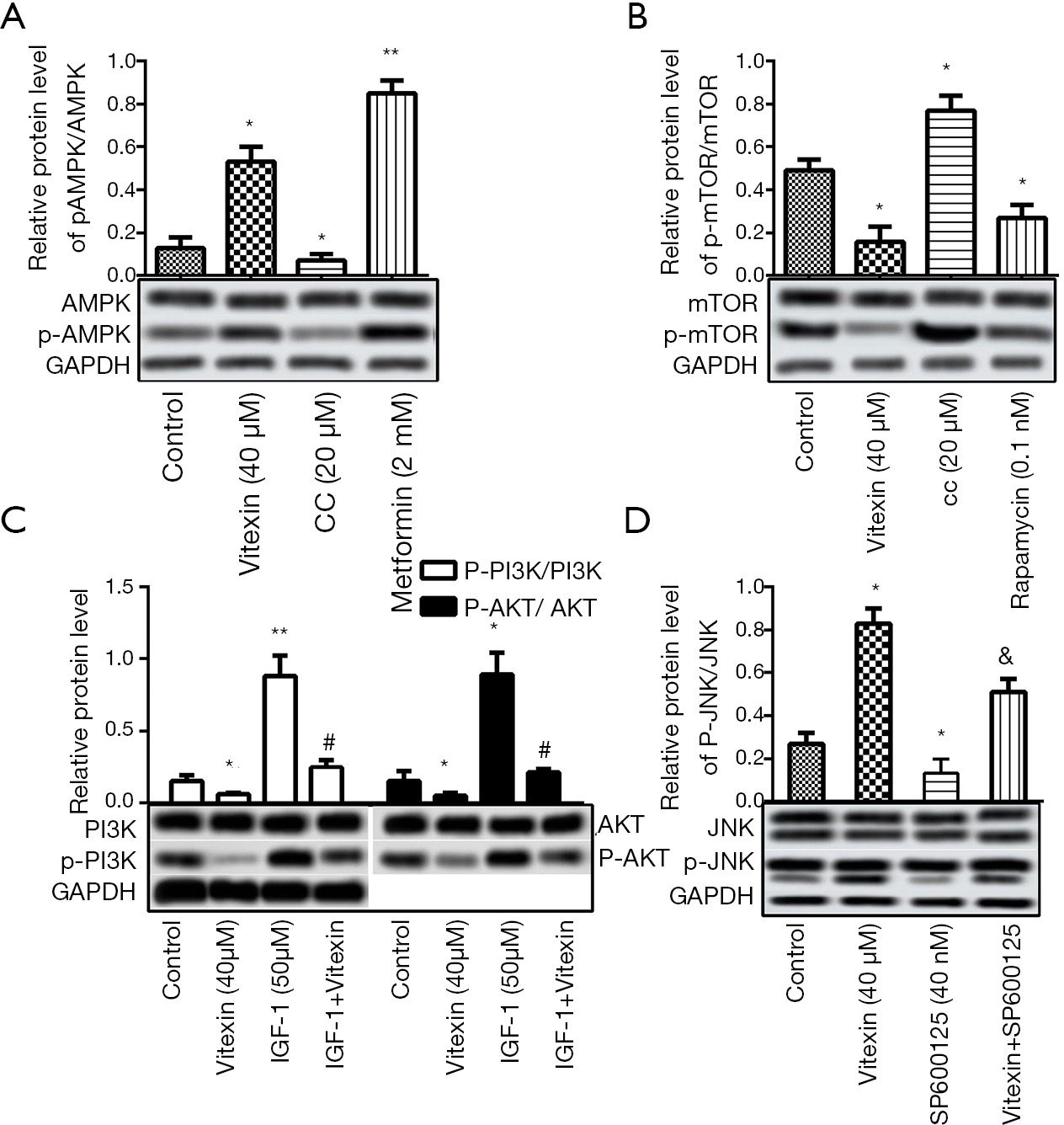 To establish the effects of vitexin in vivo, BALB/c nude mice were incilated with ACHN cells. As shown in Figure 6A, vitexin treatment significantly reduced the weight of tumors in mice compared with the control group. No obvious adverse effects were observed. Flow cytometry analysis also showed that vitexin had no significant toxic effects on immune cells (Figure 6B). Immunohistochemistry results indicated that vitexin treatment also inhibited the expression of Ki67 (Figure 6C) and Caspase-3 (Figure 6C) in tumor tissue. These results show that vitexin treatment inhibits tumor formation in vitro and in vivo, possibly through regulating AMPK/mTOR, PI3K/AKT/mTOR, and JNK pathways, which was concluded in Figure 6D. 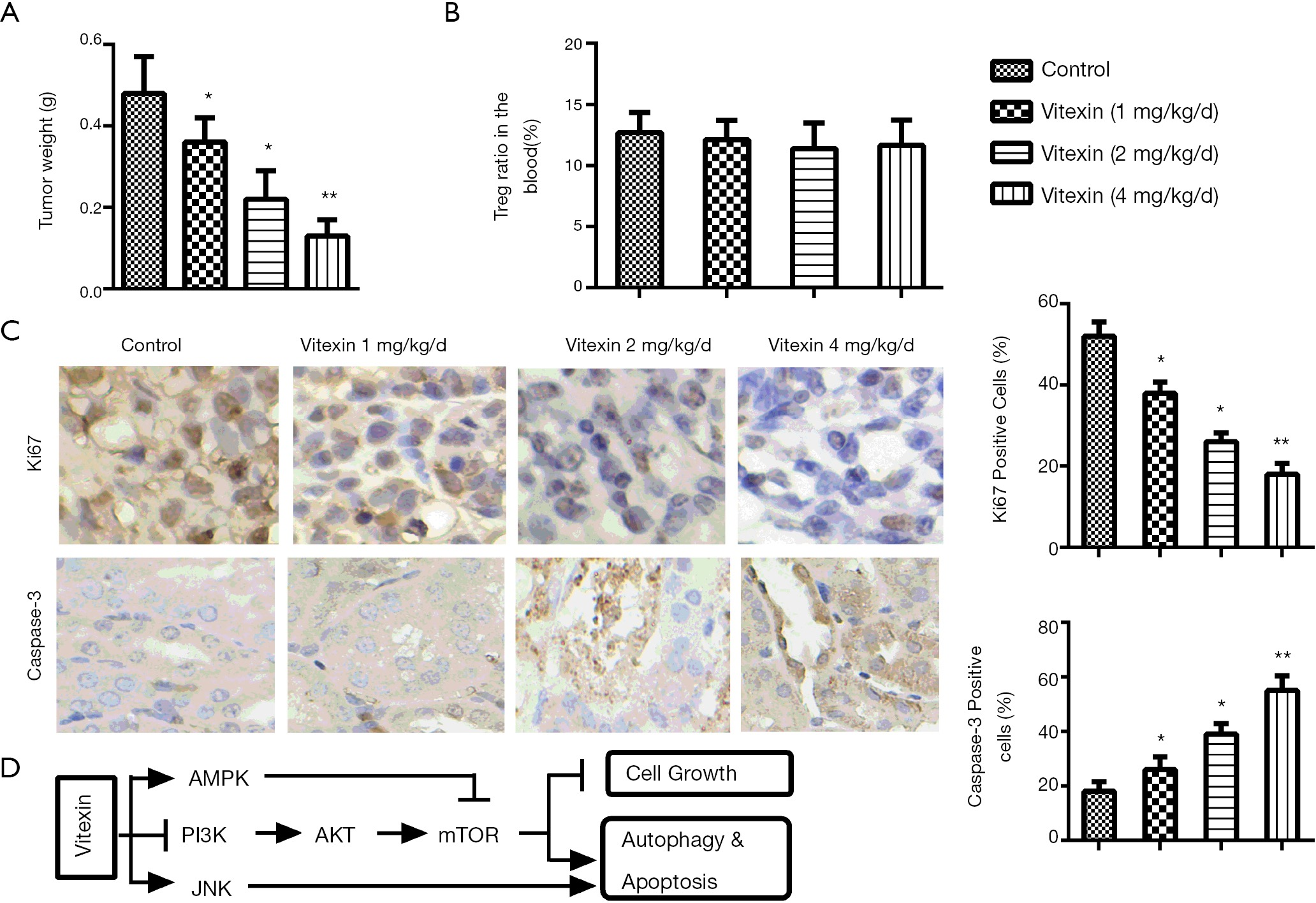 Figure 6 Vitexin inhibits tumor formation in vivo. The mice were divided into four groups (n=10) and treated for 25 days as: control group (saline); vitexin 1 mg/kg/d; vitexin 2 mg/kg/d; and vitexin 4 mg/kg/d. (A) Tumors were weighted. (B) The ratio of Tregs in the peripheral blood. (C) The expression of Ki67 and Caspase-3 in tumor tissues measured by IHC and observed under 200× scope. (D) Mechanism of action for vitexin validated in this research. (*, P<0.05 vs. control; **, P<0.01 vs. control).

After bladder cancer, RCC is the most common urinary system disease in humans. In China, the incidence of RCC increases each year. Routine radiology helps early diagnosis; however, patients with advanced disease or widespread metastases remain incurable (18). Although surgery and targeted therapy are beneficial, drug resistance limits their application. Therefore, it is important to find new drugs with minimal side effects for the treatment of RCC. This study proposed a new, biologically active compound that inhibited the proliferation of ACHN and OS-RC-2 cells, induced apoptosis and autophagy, and provided a new therapeutic method for clinical treatment of RCC.

Beclin1, P62 and LC3 are three marker proteins for autophagy. Beclin1 is an autophagy initiation factor that accelerates autophagy (25). Accumulation of LC3 reduces the level of p62, inhibiting tumor growth. Zhang et al. found that thymoquinone promotes the expression of LC3 in 786-O and ACHN cells, thereby inducing autophagy (12). Chai et al. determined the expression of Beclin-1 and LC3-II are increased with the overexpression of AIM2 in renal cancer cells (26). Similarity, in the present study, vitexin caused elevation in levels of Beclin1 and LC3 in ACHN and OS-RC-2 cells, while levels of p62 were decreased. These results indicate that vitexin promotes autophagy in RCC.

In conclusion, this study clarified the role of vitexin in RCC and its corresponding molecular mechanism, both in vitro and in vivo. The study demonstrated that in vitro vitexin (10, 20 and 40 µM) can significantly inhibit the growth of ACHN and OS-RC-2 cells and induce apoptosis and hyperautophagy in a dose-dependent manner by upregulating the AMPK/mTOR and JNK pathways and downregulating PI3K/AKT/mTOR pathways. In addition, vitexin can inhibit tumor formation in vivo. Therefore, vitexin may be a promising drug for the treatment of RCC.

Reporting Checklist: The authors have completed the ARRIVE reporting checklist. Available at http://dx.doi.org/10.21037/tau-20-1094

Conflicts of Interest: All authors have completed the ICMJE uniform disclosure form (available at http://dx.doi.org/10.21037/tau-20-1094). The authors have no conflicts of interest to declare.

Ethical Statement: The authors are accountable for all aspects of the work in ensuring that questions related to the accuracy or integrity of any part of the work are appropriately investigated and resolved. All animal experiments were performed in accordance with the National Institutes of Health (NIH) Guide for the Care and Use of Laboratory Animals and were approved by Guizhou Medical University.