Greenlight laser vaporization versus transurethral resection of the prostate for the treatment of benign prostatic obstruction: evidence from randomized controlled studies

Transurethral resection of the prostate (TURP) is almost always regarded as the standard in the surgical treatment for benign prostatic obstruction (BPO). However, TURP is not uncommonly associated with perioperative morbidities, which are directly related to prostate volume and surgically high-risk patients with associated comorbidity, including pacemakers, anticoagulant and platelet antiaggregant medications. The time-dependent absorption of electrolyte-free irrigating fluid leading to hyponatremia, usually limit the time to perform a safe monopolar TURP especially in large adenomas.

In the last decade, a variety of cost-effective transurethral laser technologies emerged as alternative minimally-invasive surgical options for management of BPO, including the Greenlight photoselective vaporization of the prostate (PVP). This is a side-firing laser technique, which has been refined from the 60 W system initially introduced by Malek et al. (1) to the currently available models in use with different maximum power output (80, 120, and 180 W) and different fiber design. Several randomized controlled trials (RCTs) have confirmed the efficacy and safety of these subsequent Greenlight generations in comparison to TURP. Unfortunately, systematic reviews and meta-analyses are limited by the heterogeneous reporting of data of these RCTs due to the combination of different generations of PVP into a single arm against which TURP was compared. Occasionally, the TURP cohort included mono and bipolar technology, adding another component of heterogeneity. Another limitation resides in the different follow-up times reported with a high attrition rate beyond 1-year follow-up. Thangasamy and colleagues included nine RCTs with 448 patients undergoing PVP (80 W in five trials and 120 W in four trials) and 441 undergoing TURP with a follow-up ranging from 6–36 months (2). Six studies found no difference between PVP and TURP, two favored TURP, and one favored PVP.

The Greenlight laser is a continuous wave laser which initially used a potassium titanyl phosphate (KTP) crystal to produce a light beam at a wavelength of 532 nm. This wavelength is selectively absorbed by oxyhemoglobin in prostatic tissue at a power level of 80 W, allowing for tissue photovaporization with a short depth of penetration. Although comparable functional outcomes had been found between KTP/80 W and TURP for relatively small prostates in a nonrandomized prospective study (3), early functional results of TURP were superior to PVP in patients with prostates larger than 70 mL in another RCT (4).

Replacing the previous KTP/80 W, the High Performance System (HPS) generates more collimated laser beams (8° vs. 15°) with a lithium triborate crystal, increasing the power generated to 120 W (5), with consequent improvement in the ablation efficacy. In a bovine model, HPS laser at 80 and 120 W respectively vaporized 50% and 100% more tissue than the KTP/80 W (6). Nevertheless, several challenges remained including hemostasis and fiber deterioration while larger prostates remain problematic. In one RCT with 36-month follow-up, TURP was associated with significantly higher transfusion rate (20% vs. 0%) and percent reduction in prostatic specific antigen while HPS/120 W was associated with significantly higher reoperation (11% vs. 1.8%) (7). We have to keep in mind that the major handicap of minimally invasive surgery for BPO is the durability/reoperation rates. Another multicenter RCT failed to demonstrate the non-inferiority of HPS/120 W to TURP on prostate symptoms at 12-month, despite the shorter length of hospital stay associated with HPS (8). Unfortunately, this study has a questionable methodology in terms of sample size calculation and the non-inferiority margin of two IPSS points and/or a difference in length of stay of ≥1 day between the two techniques. Sample size calculated was apparently underpowered and the number of patients enrolled per each arm was inconsistent with what has been calculated while increased length of hospital stay may result from non-procedural causes.

Consequently, Greenlight XPS/180 W was introduced in 2011 to provide the fastest and most efficient prostate vaporization with a comparable safety profile to the former Greenlight devices. It increases operation time efficiency by providing more energy/time and potentially used for vapoenucleation. Furthermore, the latest MoXy liquid-cooled fiber demonstrates less significant degradation during vaporization, leading to a constant high-power output until the end of the procedure and better coagulation with pulsed Trucoag.

The recent GOLIATH study prospectively compared XPS/180 W to the conventional TURP for the treatment of BPO (9). The authors are commendable in their efforts to develop the largest prospective RCT comparing laser prostatectomy with TURP. The short-term comparable efﬁcacy and safety outcomes between both procedures which were previously observed at 6 and 12 months were maintained at the recently reported 2-year follow-up. Unfortunately, methodological ﬂaws have created a signiﬁcant level of bias that presents challenges in accepting its conclusions.

Considering the non-inferiority design of the study, one should be cautious when interpreting its results as such study design has its own limitations and is uncommonly associated with valid conclusions, whatever the perfect data analysis was. A selection bias is also expected from combining monopolar and bipolar data in the TURP arm (58.6% vs. 41.4%). A recent meta-analysis showed better perioperative outcomes with bipolar TURP and PVP compared with monopolar TURP (10). Seven patients in the TURP arm were diagnosed to have prostate cancer, 5 of them (3.8%) were diagnosed incidentally. This is well known to happen and should not influence the outcome from a functional point of view. The authors suggested that this finding should be considered as an adverse event, which does not make any sense. On the other hand, PVP techniques hardly provide tissue for pathological examination, representing a pitfall of these devices which should be considered a handicap rather than an advantage. Furthermore, early postoperative re-intervention rate was three times higher after TURP, a finding which became comparable after 6 months between both arms and was maintained until the 2-year follow-up. However, the number of reoperated patients progressively increased over time in the PVP arm after 6 months to the most recent follow-up reported (10 vs. 3 patients), especially for bladder neck contracture, including four patients in the PVP arm who needed reoperation in the second year vs. only one patient in the TURP group. This highlights the necessity for longer follow-up to adequately address the issue of reoperation, which usually challenges the long-term outcome of any prostatic intervention, especially with increasing patients’ life expectancy. This is important when considering the overall treatment burden as long-term adverse events may far outweigh any short-term advantage from an approach that is initially less morbid, even if the intervention is initially efficacious.

Furthermore, it would be interesting in the latter study to have a subgroup analysis characterizing reoperated patients in either group stratified by the prostate size and addressing the functional outcomes, as well, especially that 50% of patients in both groups have prostates smaller than 48 mL. While smaller prostate glands can be managed equally well with any technique, larger adenomas are more challenging and could potentially be better treated with XPS/180 W, particularly with the adoption of the vapoenucleation principle which proved itself as a possible competitor to other laser enucleation approaches (11). This principle was not utilized in the GOLIATH study.

Cost analysis is another crucial parameter which should be taken into consideration when comparing different surgical procedures for BPO. The XPS/180 W was found to be associated with a significant reduction in overall costs when compared to TURP in a multicenter study (12). Cost was significantly higher in the surgical phase with XPS but was significantly lower in the post-surgical phase due to a shorter length of hospital stay that offsets the cost of the new technology. Some authors have argued that PVP may also have the advantage over TURP of preserving sexual function such as retrograde ejaculation (13). Others found that ejaculation was the main sexual function affected by PVP despite the significant improvement of sexual satisfaction and bother due to sexual symptoms (14). This may be due to the positive impact of relief of bothersome lower urinary tract symptoms.

Considering that patients presenting for BPO surgery became older, more morbid and had larger prostates (15), the comparison between PVP and TURP would have a different perspective, supporting the argumentation in favor of laser prostatectomy. Currently, the 532 nm laser is no longer used only for prostate vaporization but also for vapoenucleation techniques, encouraged by the introduction of the XPS system previously described. We at McGill University prospectively compared the three successive generations of Greenlight laser with the same old Holmium: YAG laser in three RCTs including 292 patients with BPO between March 2005 and April 2013 (Table 1) (11,16-18). For prostates <60 cc, functional outcomes were comparable between PVP using KTP/80W and Holmium laser ablation of the prostate (HoLAP) (16). However for prostates >60 cc, a significantly higher number of patients undergoing HPS/120W needed intraoperative conversion to monopolar TURP compared to Holmium laser enucleation of the prostate (HoLEP) (22% vs. 0%, P=0.001) (17). Nevertheless, Vapo-enucleation with XPS/180 W was not inferior to HoLEP in improving patients’ symptoms (11), despite the finding that two patients (3.7%) in the XPS arm needed redo HoLEP within 12 months postoperatively and electrocautery was necessary for completion of the procedure in 8 (15%) patients undergoing XPS due to large prostate size which reached up to 150 mL in some patients (11). It seems that when KTP was compared to HoLAP for appropriately selected prostate size on a pure vaporization fundamental, the outcomes were comparable up to 3 years postoperatively, including retreatment rates (Figure 1) (18). However, with increasing the prostate size, PVP alone might be not sufficient and the vapoenucleation/enucleation principle needs to be adopted. Actually, the introduction of the XPS/180 W with the MoXy fibres encouraged the adoption of the enucleation principle, making it a real contender to other laser enucleation techniques, including HoLEP in treating large adenomas. 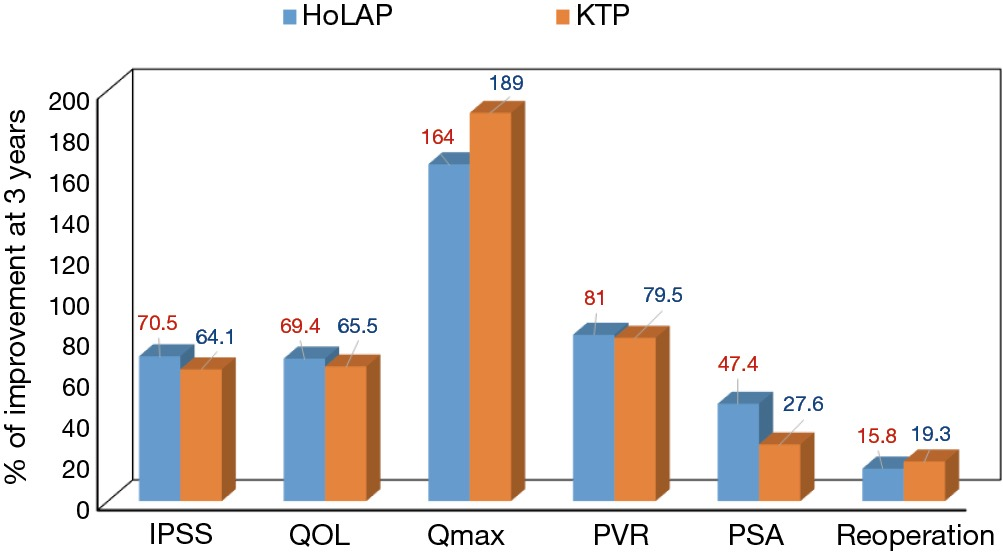 In conclusion, Greenlight PVP has shown to be at least as effective as TURP and has the advantage of reducing perioperative complications and length of catheter time and hospital stay. Therefore, it was incorporated into both the American Urological Association (19) and the European Association of Urology (20) guidelines as an alternative to TURP. Nevertheless, some critical issues still need to be addressed such as the long-term functional outcomes and retreatment rates for XPS, adequate high level evidence addressing the results of PVP in coagulopathic patients, and sexual outcomes after PVP in terms of erection, ejaculation and sexual satisfaction.