Perhaps “confusion” is one of the most repeated words in the medical literature related to interstitial cystitis/bladder pain syndrome (IC/BPS). There is confusion as to its definition, uncertainty as to its etiology, lack of consensus on diagnosis and many questions about its treatment. In this situation of constant debate, which is the role of bladder hydrodistention (HD)? Which elements lead us to arrive at the diagnosis? Why are we sometimes confused by it? What should be taken into account in assessing its results? What is its therapeutic value? Is it safe?

The National Institute of Diabetes and Digestive and Kidney Disease (NIDDK) established the findings of glomerulations or Hunner’s ulcers in the cystoscopy with HD as the diagnostic criteria for intesrtitial cystitis (IC) (1).

Since 2008, the European Society for the Study of Interstitial Cystitis (ESSIC) establishes the diagnosis in basis of chronic (>6 months) pelvic pain, pressure or discomfort perceived to be related to the urinary bladder accompanied by at least one other urinary symptom such as persistent urge to void or urinary frequency, and establishes a list of confusable diseases that must be excluded. It indicates that the practice of cystoscopy under anesthesia with HD with eventual biopsy is a diagnostic prerequisite. It also suggests a classification from their findings (2). The European Association of Urology, in its guidelines on chronic pelvic pain agrees with these diagnostic criteria and with the indication of HD (3). The Society of Interstitial Cystitis of Japan, endorsed by the Japanese Urologic Association in its guidelines for the diagnosis and treatment of IC determines that, besides the presence of lower urinary tract symptoms and exclusion of confounding diseases, the presence of Hunner’s ulcer and/or mucosal bleeding of the bladder after over-distention must be proved (4). Similarly, these diagnostic criteria which include these same cystoscopic findings are recommended by a group of experts from East Asia (5). In addition, the Bladder Pain Syndrome Committee of the International Consultation on Incontinence supports the definition of ESSIC and recommend their classification of findings using cystoscopy, but determines that it is more fruitful to establish a broad clinical diagnosis, on the basis of symptoms and exclusion of other diseases, and then stratify patients by urodynamic, cystoscopic, histological, and other tests on the basis of the significance of these findings for results of treatment and prognosis of disease, although current efforts to phenotype the disorder by the presence or absence of associated syndromes and diseases may also prove useful in the same way (6). Recently the American Urological Association (AUA) guidelines on diagnosis and treatment of IC/BPS reinforce the importance of a thorough clinical approach to diagnosis and relegates cystoscopy for dubious or complex cases, and do not recommend HD as routine to establish the diagnosis of IC/BPS (7).

According to the criteria of the NIDDK, HD must take place under anesthesia, at a pressure of 80 to 100 cmH2O, lasting 1 to 2 minutes and up to 2 times. To be considered positive Hunner’s ulcers or glomerulations must be identified, which should be diffuse in at least three quadrants, with ten glomerulations per quadrant and these lesions should not be in the path of the cystoscope (1).

In 2004 Nordling et al. carried out a detailed explanation of the technique of bladder HD. The authors suggest the use of rigid cystoscope with the use of glycine solution to allow clotting after biopsies. The height of infusion should be 80 cm above the pubic symphysis and the loss by urethra should be avoided, if necessary through the digital lock. The bladder is filled until the infusion stops dripping, and then distention is maintained for 3 minutes at maximum capacity to then start emptying. During infusion and emptying, characteristic pathological findings in the bladder wall are searched. Then a second filling is performed. During the second filling the maximum capacity is not reached to optimize vision of lesions and biopsy. The findings are classified into five grades: normal (0), petechiae in at least two quadrants (I), large submucosal bleeding (II), diffuse global submucosal bleeding (III) or mucosal disruption with or without bleeding (IV), carrying out the inspection of the five areas of the bladder (anterior, posterior, lateral left and right, and bottom) (8) (Figure 1). 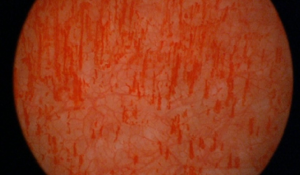 In those years, Turner and Stewart made a review based on a questionnaire completed by 244 urologists in the United Kingdom, and conclude that there is a great variability in terms of the time of distension (from 1 to 20 minutes), the number of times that HD is performed, the pressures used for filling and bladder capacity measurement mode. They propose a protocol for HD suggesting the placement of the fluid bag at 100 cm above the pubis symphysis and the distention of the bladder for 1 minute, repeating the procedure for a maximum of 5 times without exceeding 1,000 mL of infusion, measuring the bladder capacity at the initial and at the last distention (9).

However, and despite the passing of the years, there is not a standard technical protocol. It is observed that HDs, either for diagnostic or therapeutic purposes continue to be variable (10,11). ESSIC and EAU guidelines (2,3) did not mention the technique, and the AUA guidelines suggests that when carried out with therapeutic purposes it must be done under anesthesia, at low pressure (60 to 80 cmH2O) and for less than 10 minutes (7).

Japanese guidelines suggest that HD should be carried out with lumbar anesthesia level T6 (avoid anesthesia above level T4) with 80 cmH2O pressure and if the volume infused reached the 800 to 1,000 mL before reaching the 80 cmH2O, discontinue the filling. After filling the pressure must be maintained “a few minutes” and then empty the bladder by observing changes in the mucosa. They also suggest the repetition of the procedure although its therapeutic significance is unknown, and leaving a Foley catheter overnight (4).

In relation to anesthesia, in the majority of cases it is agreed that it may be general or spinal, but the use of epidural tube anesthesia in order to perform an adjuvant HD on the next day has been reported (12). Also there are reports on the use of local anesthesia as a safe and effective way to HD, by the instillation of 10 mL of lidocaine 4% plus 40 mL of saline solution 10 minutes before filling and interrupting the infusion when urinary feeling or pain symptoms were intolerable (13).

We believe that for a comparative analysis of cystoscopic findings after the HD, consensus must be reached on the way it should be performed, in order to determine if the existing technical variables can affect the results.

Hunner’s lesion is the most characteristic finding of this pathology (1), but it is certainly not the most frequently found. This lesion is not called “ulcer” anymore because it suggests that it can be seen without HD. Hunner’s lesion is a distinctive inflammatory lesion with characteristic central fragility, presenting a deep rupture through the mucosa and submucosa when bladder distention is provoked (2). It is defined as a circumscript, reddened mucosal area with small vessels radiating towards a central scar, with a fibrin deposit or coagulum attached to this area (2,14). However, this lesion is identified in less than 10% of patients with clinical diagnosis of IC/BPS (11,13,15). We wonder if this low percentage is due to the difficult urologists have in identifying them or if they are simply not present. These lesions would be more easily recognized with the use of narrow-band imaging system that is based on a modification of the spectral features with an optical color separation filter. This type of cystoscopy used a light with a narrow wavelength and which would identify the areas with active development of angiogenesis (16). The use of biomarkers could also be useful, as the determination of intravesical evaporation of nitric oxide (NO) for the detection of patients with ulcerative IC (17). But unfortunately, these practices are not globally available and have high costs.

Other types of injuries as the glomerulations, petechiae, bleeding and edema are recognized by most urologists and have been classified in different ways taking into account the type of injury and the percentage of affected bladder mucosa (8,15). These findings are as easily visible as controversial and the analysis of this type of injury may have generated discussion about the usefulness of HD in the diagnosis of IC/BPS. We know that they are not specific, and they have been observed as false positive in other pathologies that suggests chronic inflammation of the urothelium, such as lithiasis, benign prostate hyperplasia, stress urinary incontinence (18,19), or even asymptomatic patients (20).

In contrast, it is common to find false negative results determined by the absence of glomerulations or bleeding Hunner’s lesions in patients with a clinical diagnosis of IC/BPS, situation that could correspond to early stages of the disease (21), but it has not been proved.

Comparing HD findings for patients with refractory pelvic pain and/or lower urinary tract complaints, results failed to identify any statistically significant differences in post-distention objective findings (anesthetic capacity, glomerulations) or therapeutic benefits (11). Although subsequently it has been suggested that the lack of correlation could also be due to possible effects of previous treatments (15).

Neither is there consensus about correlation (16) and not correlation (22) between histological findings and abnormalities identified in cystoscopy. The use of immunohistochemistry to determine the presence of angiogenic factors [platelet derived endothelial cell growth factor/thymidine phosphorylase (PD-ECGF/TP)] can be useful (23). Other findings, such as the increase of the autonomic response during HD determined by increased heart rate and blood pressure can be taken into account (24).

ESSIC classified IC/BPS combining cystoscopic and histological findings. Accepting as positive the glomerulations grade 2-3, Hunner’s lesions or both, and including as positive biopsy findings inflammatory infiltration and/or granulation tissue and/or detrusor mastocytosis and/or intrafascicular fibrosis. IC/BPS subtypes are classified by the combination of a number for cystoscopic finds (1, 2, and 3 for normal, glomerulations or Hunner’s injury respectively) and a letter for histopathological findings (A for normal biopsy, B for inconclusive and C for positive). If the cystoscopy or biopsies are not performed, the letter X is assigned (2).

Thus, cystoscopy with HD has a fundamental role in classification of patients with BPS/IC (3C subtype vs. other subtypes), since clinical findings and the characteristics of the pain cannot predict this difference (25). This distinction might be important in terms of age of onset, complications and therapeutic response, generating the question of whether or not it is the same disease (17,26,27).

HD alone has shown inconsistent therapeutic results with symptomatic improvement ranging from 54% to >90% of cases, for variable time, not exceeding 6 to 9 months (11,13,28). AUA guidelines consider HD as a third-line therapy (7). Despite of being a widely used practice, the lack of quality studies justifying its usefulness makes it a limited therapeutic tool (3). Treatment of Hunner’s lesions by resection or electrofulguration is highly effective, with improvement in 90% of cases. It has been suggested that a complete resection minimizing coagulation reduces the risk of bladder contracture (27,29). The AUA recommend treatment through fulguration (laser, cautery) and/or injection of triamcinolone (7). The duration of this treatment is variable, ranging from months to years and there is consensus that the treatment of the injury would be one of the few effective treatments (29-31). At this point, the differentiation of phenotypes appears to be fundamental, and the cystoscopy would fulfill a vital role (27,32).

Finally, few publications talk about complications of HD, it could be inferred that they are rare, although it is believed that there is an underreporting of these. In the literature we found reports of bladder rupture, acute pyelonephritis (33) and one case of bladder necrosis (34).

We believe that the cystoscopy under anesthesia with HD in the diagnostic approach of IC/BPS provides the ability to objectively classify patients often clinically indistinguishable. Despite this, prospective studies that clarify the points of controversy regarding the clinic and the cystoscopic findings are needed. Understanding this, it is essential to agree on a technical standard. All this would indicate that the identification of the different phenotypes would be the cornerstone to try to define more specific treatments for each case. In this context the cystoscopy with HD appears as a necessary and yet irreplaceable diagnostic and therapeutic tool.