Given the high prevalence of prostate cancer (PCa) in men (1), there has been a long-standing interest in the underlying pathogenesis of this malignancy. This disease process likely begins early in adulthood with autopsy studies demonstrating the presence of PCa precursor lesions in prostates of men in their twenties (2,3). As the prostate gland is highly sensitive to its hormonal milieu during puberty (2,3), variations in androgen levels during this period may potentially impact risk of PCa pathogenesis.

Maturation of the hypothalamic-pituitary-gonadal axis at time of puberty is associated with a surge of androgen levels (4). It has been hypothesized that an earlier androgen surge, and thus a more prolonged exposure to higher androgen levels, may be associated with an increased risk of PCa development (5). While it may be difficult to discern the exact timing of puberty, it has been shown that earlier age of puberty is associated with earlier closure of the epiphyseal plate (6), and thus shorter adult height, and that shaving is one of the male pubertal milestones (7). We thus aimed to investigate the association between age of first shave and height, surrogates for age of puberty, and risk of PCa in men presenting for a prostate biopsy. We present the following article in accordance with the STROBE reporting checklist (available at https://dx.doi.org/10.21037/tau-21-433).

We utilized a prospectively collected outcomes registry of 2,480 patients presenting for a prostate biopsy at the Charlie Norwood Veterans Affairs (VA) Medical Center in Augusta, GA between July 1995 and June 2016. Patients missing information regarding results of prostate biopsy were excluded from our cohort. If patients underwent more than one biopsy, results of the first biopsy were included and they were subsequently censored to minimize confounding secondary to sampling biases. Appropriate institutional review board ethics approval was obtained at time of registry creation, with a yearly review process ensuring compliance with institutional reporting/ethics standards.

Our primary study objective was to evaluate the association between patient age of first shave and adult height, each, and presence of prostate adenocarcinoma on prostate biopsy (i.e., a positive prostate biopsy). Secondary objectives included evaluating the association between these two variables (i.e., age of first shave and adult height) and presence of high grade cancer on biopsy [defined by a Gleason Score (GS) of 8 or worse], high volume of cancer on biopsy (defined by 50% or more positive cores), and prostate volume as per transrectal ultrasound.

Continuous variables were described using medians and interquartile ranges (IQR), whereas frequencies and proportions were used for categorical variables. Continuous variables were compared using the Student’s t-test, while the chi-square test was used for categorical variables. Correlation between variables was assessed using the Pearson correlation coefficient. The associations between the two primary study variables and presence of PCa on biopsy, high grade cancer, and high volume cancer (binary dependent variables) were evaluated using univariable and multivariable logistic regression analyses, whereas gamma regression analysis was used to evaluate the association with prostate volume (continuous dependent variable). Age of first shave and height were operationalized as categorical variables with cutoffs selected by an author consensus to ensure relatively balanced distributions of study patients in each of the age/height category groups. Age of first shave was operationalized as follows: <16, 16–18, and >18 years, whereas height was categorized as <175, 175–180, and >180 cm. All of the remaining study variables, operationalized as categorical variables, were included in both the univariable and multivariable models in order to minimize any potential sources of confounding. Potential interactions between patient race and each of age of first shave and height were evaluated on a univariable level. The variance inflation factor test was used to evaluate variable collinearity. Sensitivity analyses to evaluate the effect of missing primary variables (age of first shave and height) by including only patients with all available data was performed to evaluate whether significant findings remained consistent between the full study cohort and the sub cohort with no missing data. Statistical significance was set at a two-sided P value of 0.05. Analyses were performed using R version 3.6.1 (The R Foundation for Statistical Computing, Vienna, Austria).

The trial was conducted in accordance with the Declaration of Helsinki (as revised in 2013). The study was approved by the institutional review board of Augusta University (IRB No. 611094) and informed consent was taken from all individual participants. 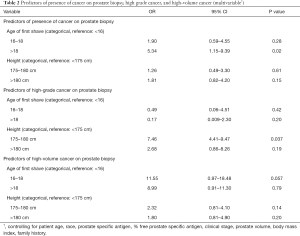 On univariable logistic regression analyses, patient height was not associated with presence of PCa on prostate biopsy (Tables S2-S4). On multivariable analyses, taller patients had significantly increased odds of high grade cancer on their prostate biopsy (OR for 175–180 versus <175 cm 7.46, P=0.037, Table 2). No interaction was seen between patient race and adult height with regards to associated risk of any, high grade or high volume PCa (Tables S2-S4).

Sensitivity analyses in the subcohort of patients (n=1,176) with no missing age of first shave or height data demonstrated consistent results with older patients having increased odds of a positive prostate biopsy (OR for >18 versus <16 years: 5.36, P=0.03) and taller patients having increased odds of high grade cancer on their prostate biopsy (OR for 175–180 versus <175 cm: 7.41, P=0.038, Tables S7-S13).

Our results demonstrate that indicators of somatic/pubertal development are associated with risk of PCa in patients presenting for a prostate biopsy. Namely, patients who start shaving after 18 years of age have a five-fold greater risk of a positive prostate biopsy compared to those who start shaving prior to 16 years of age and those 175–180 cm in height had a greater than seven fold increased risk of being diagnosed with high grade cancer on their prostate biopsy compared to those <175 cm.

Our findings suggest that patients with later age of puberty, and thus later testosterone surges, are at increased risk of overall and high grade PCa, which contradicts our earlier hypothesis of increased PCa risk with prolonged androgen exposure. A possible explanation for these findings may be related to insulin-like growth factor (IGF-1) levels. IGF-1 is vital for cellular differentiation, proliferation, transformation, and apoptosis, and increased levels have been positively associated with PCa risk (12,13). IGF-1 levels increase rapidly during puberty and then drop during adulthood (14). A delay in IGF-1 level peaks in patients with delayed puberty may thus, theoretically, be an underlying cause of increased PCa risk in such patients.

While increased testosterone levels have long been accepted as a risk factor for PCa pathogenesis, and treatments for advanced PCa target androgen suppression (15), there has been increasing evidence to suggest that patients presenting for a prostate biopsy, and thus at high baseline risk for PCa, may have lower levels of testosterone (16,17). In a prospective study of patients with high grade prostatic intraepithelial neoplasia undergoing a re-biopsy, Garcia-Cruz et al. demonstrated that patients with lower free testosterone levels exhibited increased risk of PCa (18). These findings are further supported by additional studies demonstrating that patients with lower testosterone levels at time of prostate biopsy had higher odds of being diagnosed with PCa (19,20). Additionally, such patients may also be at increased risk of diagnosis with high grade disease (21,22). We must highlight however the observational nature of these studies that evaluate associations, which are often biased by multiple confounders and thus subject to selection biases, and not causation.

Our results may also be partly explained by the cross-sectional nature of this study. Patients referred for a prostate biopsy are at higher risk for PCa than the general population, and thus have a higher pre-test probability of a positive prostate biopsy. It can also be argued that patients with shorter duration of exposure to high androgen levels (i.e., those with delayed puberty) are expected to have lower serum PSA levels (23), and thus those referred for a prostate biopsy, often due to an elevated PSA measurement, are actually at an inherently higher risk of having underlying malignancy explaining the increased odds of a positive prostate biopsy in our cohort.

In addition to a potential selection bias, there may be a recall bias related to having patients self-report their age of first shave. These patients may also have had varying “thresholds” to start shaving, potentially influenced by social factors. Age of first shave was not available in 52.7% of patients, with missing data a source of potential bias. However, sensitivity analyses of the subcohort of patients without missing data (n=1,176) demonstrated consistent results suggesting that the data may be missing at random. Furthermore, the cutoffs for the categorical variables of age of first shave and height were chosen by a consensus of the authors with choice of cutoffs potentially influence the significance of the results obtained. As a patient’s BMI is derived from his height and weight, including both height and BMI variables in the multivariable models may have introduced collinearity, influencing the significance of the results. As patients in our cohort were recruited from 1995, a significant proportion (45.9%) did not undergo a twelve core prostate biopsy, which is the current standard of practice (24). No differences were seen however in baseline characteristics of patients undergoing a twelve versus non-twelve core biopsy. Given that our study period spanned two decades, prostate biopsies were likely performed by different providers, which may have potentially temporally impacted the accuracy of the biopsy results.

Amongst patients presenting for a prostate biopsy, those with a later age of first shave and increased adult height have an increased risk of a positive prostate biopsy and high grade PCa, respectively. These results suggest that androgen levels variations in early age may potentially impact risk of PCa pathogenesis later in adulthood.

Reporting Checklist: The authors have completed the STROBE reporting checklist. Available at https://dx.doi.org/10.21037/tau-21-433

Conflicts of Interest: All authors have completed the ICMJE uniform disclosure form (available at https://dx.doi.org/10.21037/tau-21-433). The authors have no conflicts of interest to declare.

Ethical Statement: The authors are accountable for all aspects of the work in ensuring that questions related to the accuracy or integrity of any part of the work are appropriately investigated and resolved. The trial was conducted in accordance with the Declaration of Helsinki (as revised in 2013). The study was approved by the institutional review board of Augusta University (IRB No. 611094) and informed consent was taken from all individual participants.