LncRNA is a non-protein-coding transcript consisting of more than 200 nucleotides (18,19). LncRNAs regulate the occurrence and development of tumors by binding to nuclear acids, proteins, and other macromolecules (20-24). As a result, lncRNAs can also predict cancer patients' outcomes (25,26). Although some molecular biomarkers have been used as independent prognostic factors by traditional predictive models of bladder cancer, there are some limitations, such as small sample size, different detection platforms, single prognostic variates, and similar (6,27). Therefore, it is an urgent clinical task to determine reliable prognostic biomarkers.

The TCGA database works on applying high-throughput genome analysis techniques to better understand the occurrence and progression of carcinoma, thereby improving its diagnosis, treatment, and prevention. Autophagy is a regulatory mechanism that removes unnecessary or dysfunctional cellular components and circulates metabolic substrates. In response to pressure signals in the tumor microenvironment (TME), autophagy pathways in tumor cells and immune cells are altered, thus affecting tumor progression, immunity, and treatment differently. Autophagy is an important mechanism in cancer biology, immunology, and therapy. Thus, in this study, we used a rigorous computational framework to mine immune-autophagy-related long noncoding RNA (IArlncRNAs) and clinical data of bladder cancer downloaded from the TCGA database, as well as to construct a prognostic model IArlncRNAs in order to predict the OS of bladder cancer patients and identify the potential mechanisms. We present the following article in accordance with the TRIPOD reporting checklist (available at https://dx.doi.org/10.21037/tau-21-560).

The TCGA database is a project supervised by the National Cancer Institute and National Human Genome Research Institute. In this study, we used a TCGA database (https://portal.gdc.cancer.gov/) to download transcriptome (FPKM) and clinical data of patients with bladder cancer (containing primary and metastatic bladder cancer). We organized the transcriptome data and converted the ENSG number to symbol ID. The study was conducted in accordance with the Declaration of Helsinki (as revised in 2013).

Identification of IArlncRNAs associated with prognosis of bladder cancer patients

Construction of the prognostic model

Patients who were followed-up for less than 30 days from the clinical data set were excluded. Then, we combined the expression of IArlncRNAs and survival time utilizing the intersection. According to 1:1 ratio, the total samples were randomly divided into the training group and the test group. IArlncRNAs associated with survival were screened in the training group by univariate Cox regression and LASSO regression analysis. The prognostic model was constructed based on the IArlncRNAs above by multivariate Cox regression model, and their coefficients were calculated respectively (we used the R packages “survival” and “survminer”). Then, we calculated the risk score based on the risk coefficient and expression of IArlncRNAs. The formula for calculating the risk score is listed below: Risk score = βgene 1 × exprgene 1 + βgene 2 × exprgene 2 +...+ βgene n × exprgene n.

The patients were divided into the high- and low-risk groups according to the median risk score, after which the heatmaps of IArlncRNAs associated with prognosis in the training group and test group were drawn, respectively. To identify the survival differences between the high- and low-risk groups, we drew the Kaplan-Meier survival curves, survival status distributed plots, and risk score distributed plots. Finally, we verified the predictive value of the risk score model by drawing the ROC curve of the training group and test group (we used the R package “timeROC”).

To investigate the association between the IArlncRNAs and their target mRNA, the IArlncRNA-mRNA network was constructed. Pearson correlation coefficients were used to analyze the difference between IArlncRNAs and mRNAs, while the absolute threshold coefficient value >0.4 and P value <0.001 were set as significant. The IArlncRNAs-mRNAs network was visualized by the Cytoscape software (version 3.7.2, http://www.cytoscape.org/).

We constructed a nomogram by incorporating the related clinical factors (age, gender, stage grade) and risk score obtained from the previous multivariate Cox regression analysis (we used the R package “rms”, “foreign”, and “survival”). We drew the calibration curves and multivariate ROC curves to evaluate the model’s discrimination and accuracy (we used the R package “timeROC”).

To evaluate the proportion of 22 immune-infiltrating cells in each sample, we used a wildly proposed computational algorithm “Cell type Identification By Estimating Relative Subsets Of RNA Transcripts (CIBERSORT)” in R software. The samples with P value <0.05 were considered for further analysis. According to the risk score based on the risk coefficient and expression of IArlncRNAs, we divided the samples into high- and low-risk groups. Then, the Wilcoxon test was used to identify the proportion of immune cell subtypes between the high- and low-risk groups. We identified immune-infiltrating cells associated with survival by univariate Cox regression and multivariate Cox regression (we used the R packages “survival” and “survminer”). To identify the correlation between immune-infiltrating cells and IArlncRNAs, we calculated the Pearson correlation coefficients.

Prediction of the sensitivity of chemotherapeutic agents

To evaluate the differential sensitivity of chemotherapeutic agents between the high- and low-risk groups, pRRophetic algorithm was applied to predict the drugs IC50 based on the Cancer Cell Line Encyclopedia (CCLE) (29,30). R package “pRRophetic” was used to construct the ridge regression model based on the data from the CCLE for the inserted drugs. Besides, we drew boxplots of differential IC50 of interested drugs between the high- and low-risk groups with R software (Wilcoxon signed-rank test).

Transcriptome data and clinical data on bladder cancer were obtained from the TCGA database. There were 430 specimens in transcriptome data, including 411 tumor specimens and 19 normal specimens. The clinical data of 409 patients included 303 males, 106 females, and 158 deaths. Clinical data showed that the patients’ age ranged from 34 to 90, and their survival and follow-up time ranged from 13 to 5,050 days. Stage grade included 2 stage I, 130 stage II, 139 stage III, and 138 stage IV. These data are shown in Table 1. 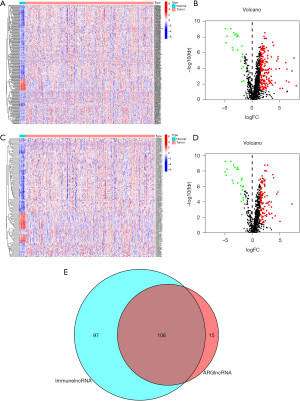 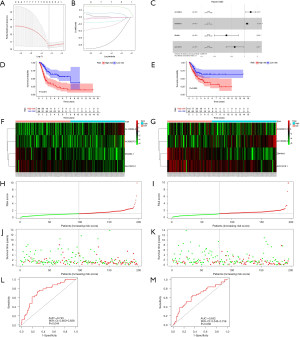 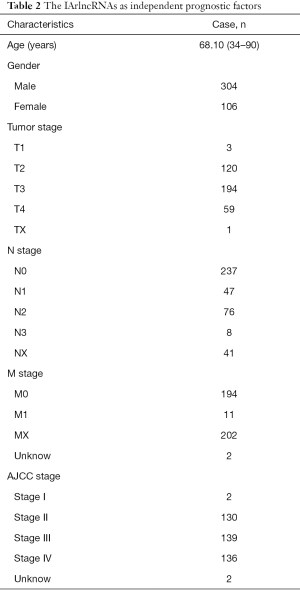 A risk score of IArlncRNAs

Establishment of the lncRNA-mRNA co-expression network

Subsequently, we identified the potential functions of 4 IArlncRNAs in bladder cancer by establishing the lncRNA-mRNA co-expression network and visualizing it with Cytoscape (Figure 3A). The lncRNA-mRNA co-expression network contained 102 pairs lncRNA-mRNA with | coefficient value | >0.4 and P value <0.05. Among them, 102 mRNAs were significantly associated with 4 IArlncRNAs in the immunity and autophagy signatures. Besides, we drew a Sankey diagram to describe the risk/protective relationship between the 4 IArlncRNAs and 102 mRNAs (Figure 3B). 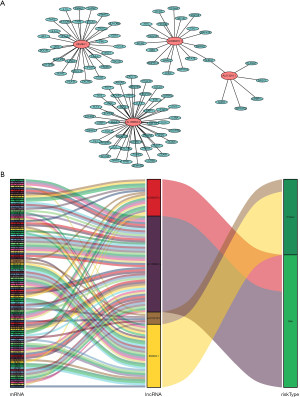 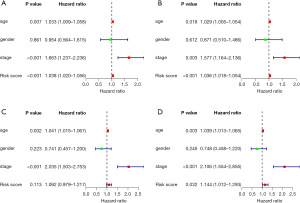 Our nomogram incorporates age, gender, stage, and risk score to predict 1-, 3-, and 5-year overall survival in patients with bladder cancer (Figure 5A). The higher the score, the worse the prognosis. Our results revealed that the risk score had the greatest impact on the prediction of overall survival. In the training group, the C index was 0.64. Also, the calibration curve and ROC curve were drawn (Figure 5B,C). The prediction was consistent with the actual observation. Similar results were found in the test group (Figure 5D-F). 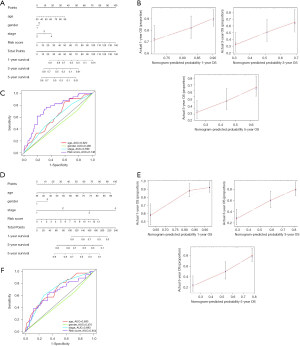 Next, we made principal components analysis (PCA) according to IArlncRNAs and total genes’ expression profiles to further understand the difference between the high- and low-risk groups. We found that the risk score can better divide the total samples into two sections, while the cumulative proportion of PC1, PC2, and PC3 were 34.39%, 61.39%, and 83.11% (Figure 6A,B).

Analysis of the composition and difference of infiltrating immune cells 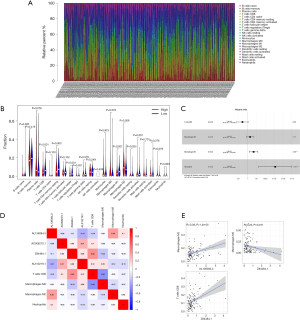 Differential response of chemotherapy upon high- and low-risk patients 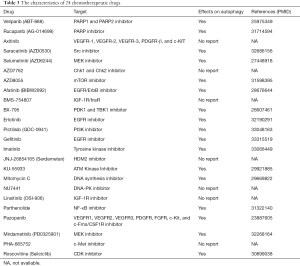 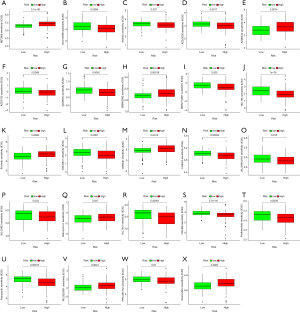 Bioinformatics technology is a powerful high-throughput tool for screening molecular biomarkers and prognostic indicators. LncRNA is a non-protein-coding transcript with a length of more than 200 nucleotides and different functions in different physiological and pathological conditions. LncRNAs have tissue-specific expression patterns and a vital role in various diseases, including cancer. For example, Zhan et al. (31) found that SOX2OT is positively correlated with histological grade, TNM stage, and poor prognosis and may serve as a potential prognostic factor in bladder cancer. Moreover, Zheng et al. (32) suggested lncRNA PTENP1 as a promising biomarker for detecting bladder cancer; lncRNA PTENP1 has a suppressor role in cancer progression and promotes prognosis. Besides, Zhan et al. (33) also showed an interesting result with a great reference value that PCAT-1 acts as an independent prognostic factor for recurrence-free survival of bladder cancer and presents a potential value for clinical diagnosis and prognosis.

In the present study, we identified 4 IArlncRNAs with immunity and autophagy signatures as independent factors that contributed to the survival of bladder cancer patients, including AL136084.3, AC006270.1, Z84484.1, and AL513218.1. According to the risk score, the patients were divided into high- and low-risk groups and analyzed the two groups’ immune infiltration. We found that the proportion of B cells naïve, T cells CD8, T cells CD4 memory resting, T cells follicular helper, macrophages M1, dendritic resting and activated cells, and macrophages M2 were different between the two groups, which may contribute to the regulation of immunity. Endogenous tumor-associated antigens (TAA), recognized and presented to T lymphocytes by dendritic cells (DCs) with the major histocompatibility complex (MHC), leads to the adaptive anti-cancer immune responses (34,35). Classic MHC includes MHC I, MHC II, and MHC III; when MHC I presents self-proteins and viral proteins to CD8+ T lymphocytes, MHC II presents extracellular antigens to CD4+ T lymphocytes. In many types of tumor cells, MHC reduction is often observed, which enables tumor cell immune escape, resulting in tumor progression and tolerance to immunotherapy (36).

TME, which consists of the tumor and other cells (stromal cells, extracellular matrix (ECM), and immune cells, such as natural killer (NK) cells, tumor-associated macrophages (TAMs), myeloid-derived suppressor cells (MDSCs), and T and B lymphocytes), is essential for the progression, maintenance, metastasis, and response to therapy of different types of cancers (41). Previous studies have shown that the immunosuppressive compartments of TME, including the autophagy activity of MDSCs, M2 macrophage polarization, and T cells regulatory (Tregs) recruitment, are associated with immune evasion (13,42,43). In our study, CD8 T cells and DCs had higher, while the M2 macrophage had lower infiltrations in the low-risk groups. Therefore, we reasonably speculated that IArlncRNAs are directly or indirectly involved in the immune regulation of TME, as well as autophagy.

This study has a few limitations. First, the data obtained from public databases were limited, and the clinical data were not comprehensive, which may lead to potential errors or deviations. Second, in this study, we did not verify the stability of IArlncRNAs prognostic characteristics in another independent data set and further experiments. Third, all the data used in this study were obtained from Western countries; therefore, careful consideration should be taken when applying our conclusions to patients from Asian countries.

In this study, we constructed a prognostic model with excellent predictive ability based on 4 IArlncRNAs in patients with bladder cancer. IArlncRNAs are critical factors, directly or indirectly involved in the immune regulation of TME and autophagy.

Funding: This study is supported by the High-level Hospital Construction Research Project of Maoming People’s Hospital and Guangdong Medical Science and Technology Research Fund (NO. 2017101819316701).

Reporting Checklist: The authors have completed the TRIPOD reporting checklist. Available at https://dx.doi.org/10.21037/tau-21-560

Conflicts of Interest: All authors have completed the ICMJE uniform disclosure form (available at https://dx.doi.org/10.21037/tau-21-560). The authors have no conflicts of interest to declare.