Chronic posterior urethritis, which is a chronic non-specific inflammation condition of the intraurethral, results from a response to injury in the urethral mucosa (1). It has chronic posterior urethritis symptoms, including urethral pain, gross/microscopic hematuria, urinary frequency, urinary urgency, and dysuria and other lower urinary tract (LUT) symptoms (2-4). As these symptoms overlap with those of recurrent urinary tract infection, overactive bladder (OAB), and interstitial cystitis/bladder pain syndrome (IC/BPS) (5-7), chronic posterior urethritis can be misdiagnosed. Research has shown that the mucosal layer of the LUT is involved in mechanosensory functions that regulate both bladder contractile activity and the urethral sensation (8,9). Changes to the mucosa are usually associated with disorders, including IC/BPS and OAB (10). However, compared to the urinary bladder, much less is known about the urothelium and lamina propria of the bladder neck and proximal urethra.

Urologists have treated female chronic urethritis from the bladder neck to the distal urethra with oral antibiotics or operations, such as urethral dilatations, internal urethrotomy, and urethral-hymenal fusion surgery (11-13). However, studies on the diagnosis and treatment of female chronic urethritis are scarce. This study examined the clinical data on transurethral electroresections that were performed on female patients suffering from chronic posterior urethritis, and who had experienced antibiotic resistance or therapy resistance and had been misdiagnosed with OAB or IC/BPS. We aimed to draw the attention of urologists to the relationship between urethral lesions and LUT symptoms, and to demonstrate the efficacy and safety of transurethral electroresection in treating chronic urethral lesions. We present the following article in accordance with the STROBE reporting checklist (available at https://dx.doi.org/10.21037/tau-21-550).

A single-center, retrospective, observational study was performed at a teaching and referral hospital from January 2015 to December 2018. A total of 147 female patients, who had been diagnosed with chronic papillary urethritis and undergone transurethral electroresection, were included in the study. All patients were treated with antibiotics or other methods at other hospitals, and had developed treatment-resistant urethritis.

To be eligible to participate in the study, patients had to meet the following inclusion criteria: (I) have symptoms such as urinary frequency, urinary urgency, dysuria, urethral pain, or gross/microscopic hematuria; (II) be older than 18 years and have a disease duration of no less than 6 months; and (III) have been diagnosed with chronic papillary urethritis or chronic cystitis and have undergone cystoscopy. Patients were excluded from the study if they met any of the following exclusion criteria: (I) had urinary tract cancer or traumatic urethral stricture; (II) were pregnant or giving childbirth; (III) had urethral diverticulum, refractory radio or chemotherapy-induced cystitis, and OAB or IC/BPS.

All patients underwent a standard preoperative assessment, including a medical history, physical examination, laboratory tests, a routine urine test, a urine culture, a cystoscopy. Patients were also asked to keep a urination diary (for 72 hours), and complete a questionnaire survey, and quality of life (QoL) survey.

Data were collected via a telephone call on which a questionnaire was administered, and during outpatient visits at the 6-month and final (at least 24-month) follow-up appointments after transurethral electroresection. At the visit, a symptom assessment, physical examination, and cystoscopy were performed, and a urinary diary was kept. Patients’ symptom scores, OAB activity, and QoL questionnaire results were used to assess symptoms, including urinary urgency, daily frequency of urination, daily number of nocturia, and QoL score. Any complications related to the procedure were also assessed.

The statistical analysis was performed using SPSS® (version 26) software. The continuous variables are presented as mean ± standard deviation (SD). The categorical variables are presented as median (range), and number (percentage). Handling missing values, we deleted the researchers directly. A paired t test was used to comparatively analyze the continuous variables. The interaction of time with treatment was examined using a 2-way repeated analysis of variance (ANOVA) tests. If Mauchly’s test of sphericity indicated a violation of the sphericity assumption for the repeated measure ANOVA tests, Greenhouse-Geisser sphericity correction was applied. A P<0.05 was considered statistically significant.

A total of 147 female patients underwent surgery. Among these 147 patients, 11 were lost during the follow-up period. The remaining 136 patients had an average age of 54 years (range, 23–82 years). The mean follow-up period was 54.8 months (range, 6–600 months). Thirty-one patients received transurethral electroresection of the papillary urethritis only, and 105 underwent transurethral electroresection of both urethral and bladder lesions. The mean duration of patients’ symptoms was 20 months. The results in relation to the short-term efficacy (baseline vs. improvement 6-month post-surgery) and long-term efficacy (baseline vs. improvement at least 24-month post-surgery) of the approach are presented in Table 1.

Among the 147 patients, the most common symptoms were urinary frequency and urgency [76 (51.7%); see Table 2]. Among the 146 patients with urine cultures, the results of 61 (42.2%) patients were positive for bacterial growth. Surprisingly, the most pathogenic microorganism was Mycoplasma genitalium [37 (25.2%)] and not Escherichia coli [13 (8.8%)]. Cystoscopic examinations were performed to detect urethral lesions in all patients. Among the 147 cases, 29 (19.7%), 85 (57.8%), 14 (9.5%), 15 (10.2%), and 4 (2.7%) were found to have finger-like polyps, tuft-like polyps and villi, pseudopodia-like polyps, a pebble-like appearance with mucosal hyperemia and edema, and follicular-like polyps, respectively. One hundred and five of the 147 patients suffered from bladder lesions at the trigone and bladder neck in addition to urethral lesions (see Figure 1). 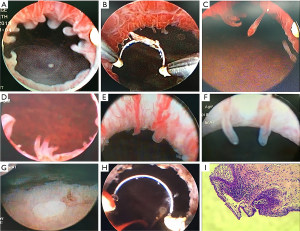 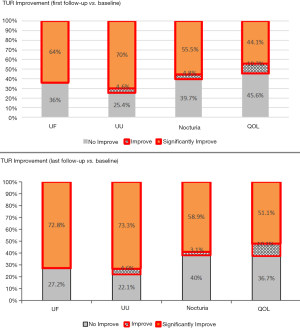 Chronic posterior urethritis is more difficult to diagnose in women than men, as its clinical symptoms are similar to those of OAB, primary cystitis, vaginitis, and cervicitis (14) involving the LUT. The urothelium in the region of the bladder neck and proximal urethra play a role in continence and sensation (9,15,16). The cause and pathogenic factors of female chronic posterior lesions are not yet completely known. It has been suggested that many factors, including non-specific infection, urethral obstruction, urethral-hymenal fusion, senile atrophy, traumatic causes, inflamm-ageing, and estrogen deficiency, may be implicated in its pathogenesis (4,12,17,18). Urethritis is classified as gonococcal or nongonococcal urethritis (NGU) based on its causative organisms that may be sexually and non-sexually transmitted. The major causes of NGU are Chlamydia trachomatis and Mycoplasma genitalium, which account for 75% of cases (19). However, other pathogenic organisms include Trichomonas vaginalis, anaerobes, herpes simplex virus, and adenovirus (20). In the present study, we identified Mycoplasma as the most common etiological agent.

As these posterior urethral lesions may be caused by infection or other injury, it is necessary for women with LUT symptoms to undergo a cystoscopy to rule out urethral and bladder inflammatory lesions. The endoscopic evaluation of the LUT provides more important information than an ultrasound or urethrocystography (21). In this study, women with chronic urethritis were leukocyte-negative, and exhibited only microscopic hematuria or an increase in the number of squamous cells in routine urine tests. Most urine cultures were negative for bacterial infections; however, urethral inflammatory changes were evident. The cystoscopies revealed that the center of lesions was located at the proximal urethra and bladder neck, which displayed hyperemia, edema, paler and granular changes, and polyp and villus formation(3). Posterior urethritis usually tended to be complicated by a bladder lesion called trigonitis (22,23). Similar to keratinizing squamous metaplasia in the bladder, some researchers have conjectured that keratinizing squamous metaplasia is a normal variant in some conditions (24). We intend to conduct further research to determine whether such lesions exist in normal women, especially pre-menopausal women.

This retrospective study had several limitations, including a potential bias, reporting errors, and the need for a longer follow-up period and high-quality trials. Based on the results of this retrospective study, while transurethral electroresection can ameliorate LUT symptoms effectively, we need to further verify whether a sham treatment (e.g., a cystoscopy without resection) would lead to symptom relief by conducting a random control trial in the future.

This study showed that urologists need to pay attention to the diagnosis and treatment of female chronic posterior urethritis, as it has LUT symptoms. Urethral lesions found in cystoscopy may be important in diagnosing the refractory disease of LUT. Further, transurethral electroresection is a simple, effective, minimally invasive approach for treating chronic posterior urethritis that does not give rise to any apparent complications.

We would like to thank Dr. Jianjun Li (Department of Urology, The Second Affiliated Hospital, Hengyang Medical School, University of South China, Hengyang 421001, China) for his help with the data collection.

Funding: The study was supported by the Funding Project of Hengyang Science and Technology Bureau (2019jh010983).

Reporting Checklist: The authors have completed the STROBE reporting checklist. Available at https://dx.doi.org/10.21037/tau-21-550

Conflicts of Interest: All authors have completed the ICMJE uniform disclosure form (available at https://dx.doi.org/10.21037/tau-21-550). The authors have no conflicts of interest to declare.

Ethical Statement: The authors are accountable for all aspects of the work in ensuring that questions related to the accuracy or integrity of any part of the work are appropriately investigated and resolved. The clinical data were collected after this study was approved by the ethics committee of the Second Hospital of University of South China (No. 2020001). All data were collected by two people independently. All patients agreed to participate in this study and signed an informed consent form. All procedures performed in this study involving human participants were in accordance with the Declaration of Helsinki (as revised in 2013).