Renal cell carcinoma (RCC) is common in urological cancer. It accounts for about 3–5% of all newly diagnosed cancers (1). Every year, approximately 403,262 patients with RCC are diagnosed and 175,098 patients die of the disease. Among them, 30% of patients were diagnosed with advanced or metastatic disease, and 20–40% of patients with RCC had metastasis even after nephrectomy. It is estimated that their 5-year survival is only 10% (1,2). Among the histological subtypes, 75% of cases present with clear cell (cc) histology, which is the best studied subtype of RCC (3).

Over the past 20 years, there have been significant changes in the treatment of patients with RCC (4). Before the arrival of immunotherapeutic agents which target the programmed death-1 (PD-1)/programmed death-ligand 1 (PD-L1) axis, the VEGF receptor tyrosine kinase inhibitors (TKIs) were widely used (2). In recent studies, anti-PD-1/PD-L1 combined with targeted therapy have been proven to be effective in advanced RCC patients. In the KEYNOTE-426 study, the overall survival (OS) and progression-free survival (PFS) of pembrolizumab combined with axitinib were significantly longer than those of sunitinib, and the objective response rate was also higher (5).

Sintilimab is an anti-PD-1 antibody independently developed in China. It binds to PD-1 and blocks the binding and interaction between PD-1 and its ligands (PD-L1 and PD-L2), thus restoring the endogenous anti-tumor T cell response. It is used in various solid tumors in China (6). Pazopanib is a TKI that is broadly used in the first-line treatment of advanced RCC. It shows non-inferiority to sunitinib with respect to PFS (7).

We present the following article in accordance with the STROBE reporting checklist (available at: http://dx.doi.org/10.21037/tau-21-338).

All procedures performed in this study involving human participants were in accordance with the Declaration of Helsinki (as revised in 2013). The study was approved by Fudan University Shanghai Cancer Center (FUSCC) Ethical Committee (No. 050432-4-1911D). Written informed consent from each patient was obtained. We retrospectively reviewed patients with advanced RCC treated with anti-PD-1/PD-L1 and targeted therapy from FUSCC. The sites of metastases were confirmed by an experienced radiologist using whole body enhanced CT or MRI. Clinicopathological characteristics including age, gender, metastatic sites, and International Metastatic Renal Cell Carcinoma Database Consortium (IMDC) risk group were obtained from electronic records (Table 1). IMDC risk score was determined by the following 6 risk factors that were present: time from initial diagnosis to randomization of less than 1 year, Karnofsky performance status score of less than 80, hemoglobin levels below the lower limit of the normal range, platelet count above the upper limit of the normal range, absolute neutrophil count above the upper limit of the normal range, and corrected serum calcium level above the upper limit of the normal range (8). The patients were followed up every 3 months by telephone or outpatient follow-up. Blood tests of complete blood count, liver and kidney function and thyroid function were performed once a month to monitor adverse events. Tumor recurrence, progression, metastasis, and death were recorded. 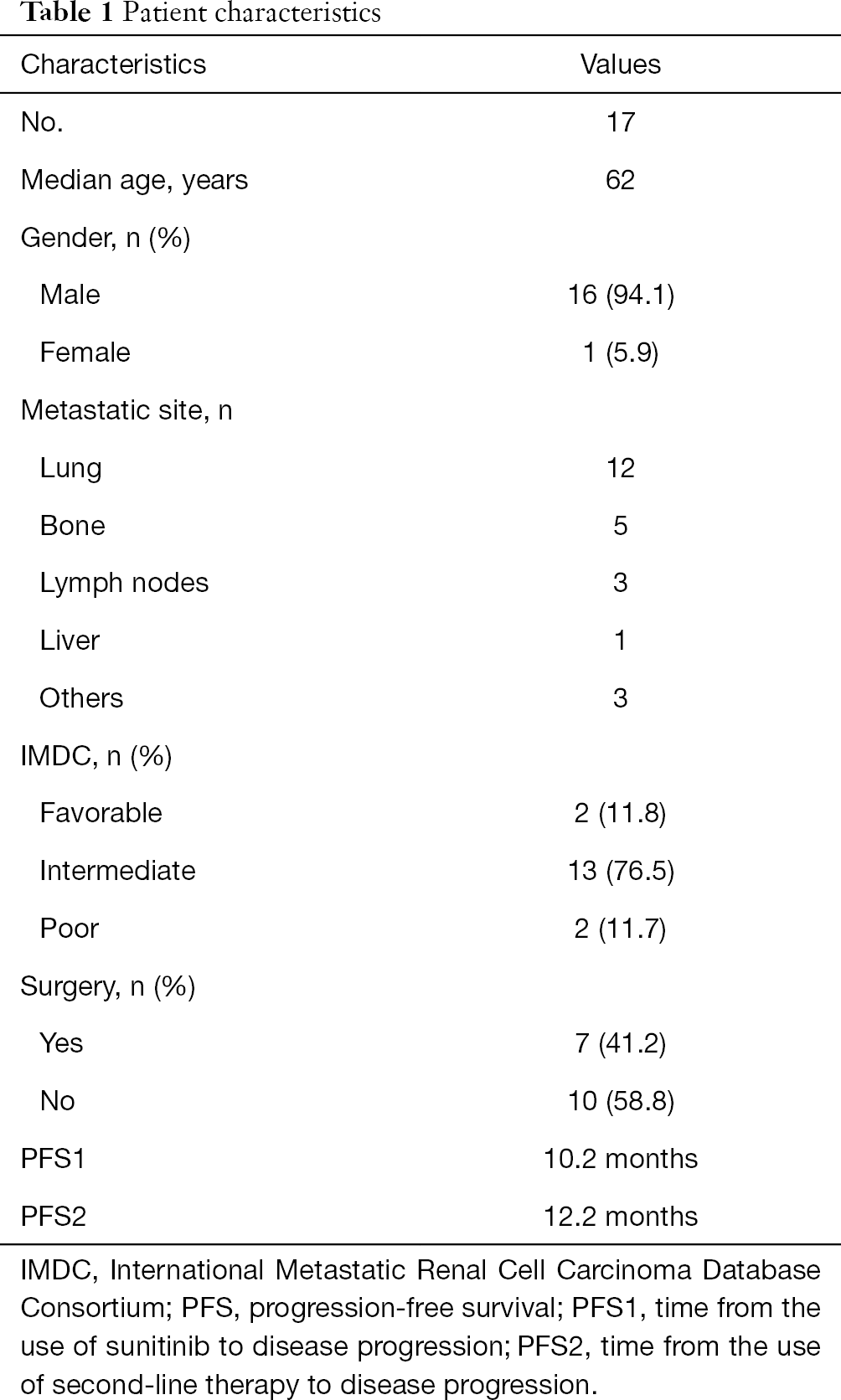 OS was defined as the period from the date of diagnosis to the date of death or the last follow-up. PFS referred to the time from the beginning of treatment to recurrence or metastasis of the disease. Cox proportional hazards models was used to calculate adjusted hazard ratio (HR) with 95% confidence intervals (95% CIs). The above data were analyzed by SPSS 20 software.

The median age of the patients was 62 years old. The median (range) duration of follow-up for all patients was 24.1 months (13.2–56.0 months). Among them, 16 were male, and 7 patients went through nephrectomy before the use of sunitinib. IMDC scores and metastatic sites are listed in Table 1.

PFS for both first-line and second-line therapy 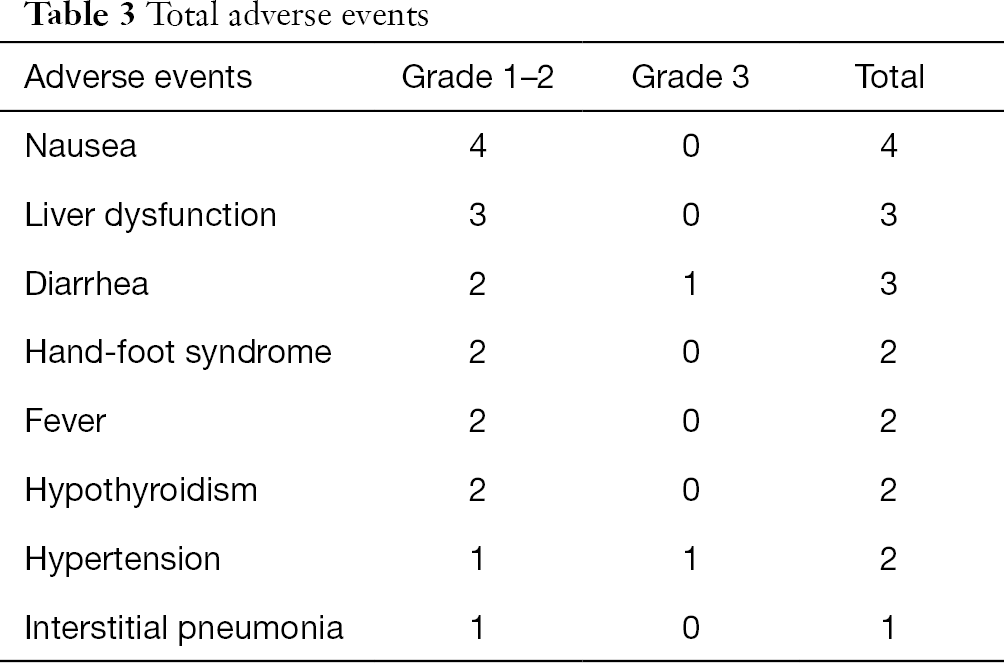 Relative factors that affect success of the combination treatment plan

In univariate Cox proportion hazard ratio analysis, IMDC score (HR: 0.041, P=0.01), and the history of renal surgery (HR: 4.102, P=0.018) were significantly correlated with prognosis. A reduced model was used in multivariate cox proportion hazard ratio analysis. Variables that were insignificant in univariate analysis were excluded in the multivariate analysis. The results indicated that IMDC score (HR: 0.041, P=0.01) was the only factor that was correlated with progression free survival (Table 4). 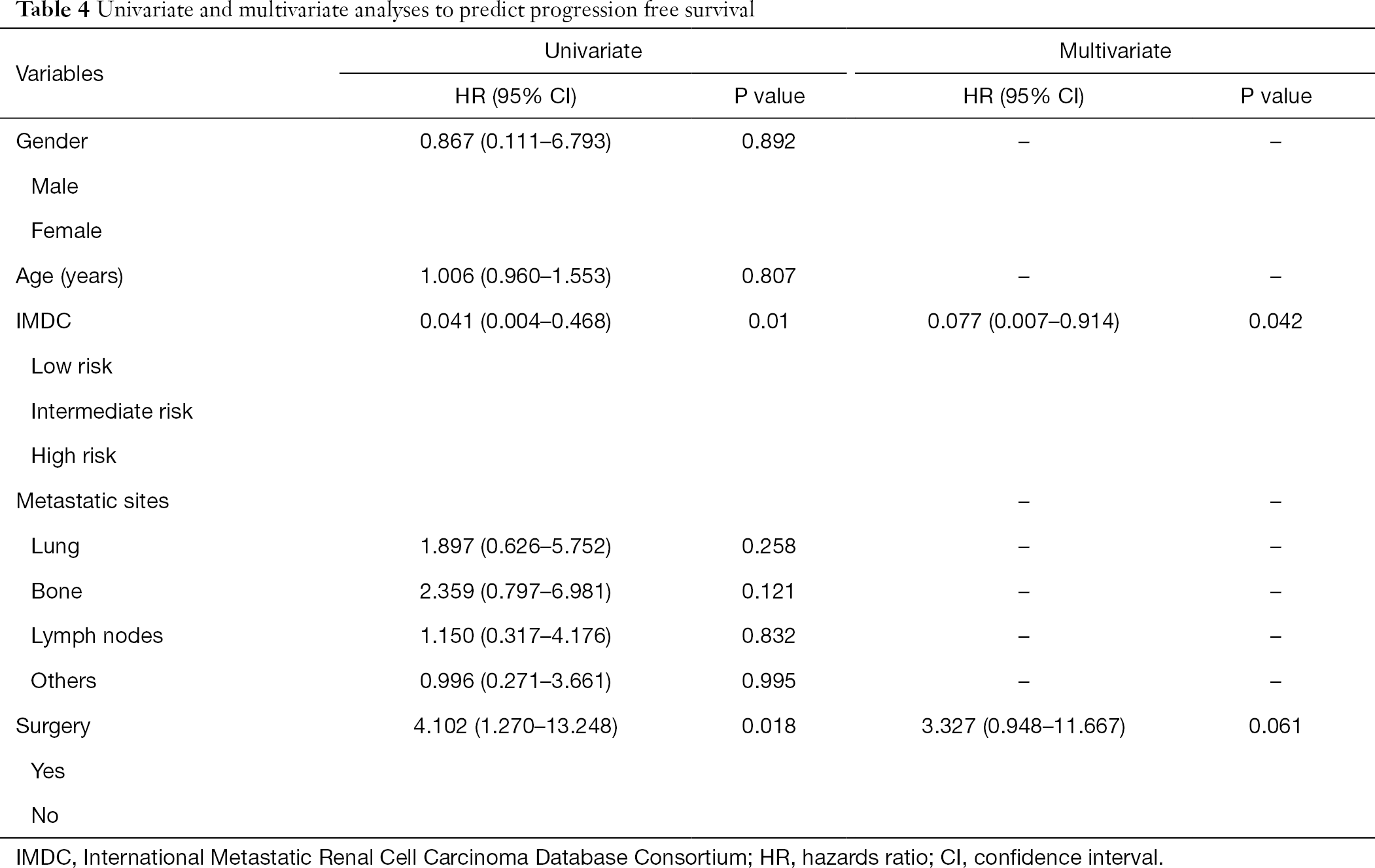 The new data provided by immune checkpoint inhibitor (ICI) agents and new combination strategies represent a revolution in RCC management, which will lead to an evolving scenario and may further influence clinical decision-making.

In the JAVELIN Renal 101 study, 886 patients with previously untreated advanced RCC were enrolled. The study evaluated the efficacy of avelumab plus axitinib or sunitinib alone. In the overall population, for the combination therapy group the median PFS was 13.8 months and for the sunitinib group the median PFS was 7.2 months (HR 0.61, 95% CI, 0.47–0.79, P<0.001). For those with PD-L1-positive tumors, ORR was higher in the avelumab plus axitinib group than in the control group (55.2% vs. 25.5%) (9).

IMmotion151 evaluated the efficacy of atezolizumab plus bevacizumab IV every 3 weeks verses sunitinib in advanced RCC patients with clear cell or sarcomatoid histology as first-line therapy. The median PFS was longer in the combination group than in the control group (11.2 vs. 7.7 months, HR 0.74, 95% CI, 0.57–0.96, P=0.0217) among patients with PD-L1-positive tumors. OS was not reached (10).

Despite the promising results, there is no study that can determine whether for those patients who need long term use of systemic therapy, should we use combination therapy the whole time or should we modify the treatment strategy for a less aggressive one. On the other hand, all the clinical trials of combination therapy have focused on the first-line treatment of advanced RCC. There is no solid evidence that shows promising results in the second-line treatment.

According to National Comprehensive Cancer Network (NCCN) guideline, cabozantinib is recommended as second-line therapy for advanced renal cell carcinoma. The recommendation is based on METEOR trial, which showed estimated median PFS for patients randomized to cabozantinib was 7.4 months (11). As for single use of pazopanib as second-line therapy, a prospective phase II trial enrolled 56 patients who had previously received first-line treatment with sunitinib (n=39) or bevacizumab (n=16). The trial showed that the median PFS was 7.5 months (95% CI, 5.4–9.4 months) (12). In our study, the PFS for combination therapy was 12.2 months, which is almost 5 months longer than the standard treatment.

In this study, we treated patients with half-year combination therapy followed by single-use targeted therapy as the second-line therapy. Most of the patients remained stable after this treatment strategy. We chose pazopanib as the maintenance treatment because it did not need intravenous administration and it has less adverse events, leading to better patient compliance. According to a large non-inferiority study (COMPARZ) of sunitinib versus pazopanib in the first line therapy of advanced RCC, these two drugs have a similar efficacy profile and a differentiated safety profile. Pazopanib was associated with less hand-foot syndrome, less fatigue, less thrombocytopenia, and less alteration in taste than sunitinib. However, patients treated with pazopanib had more transaminase elevation than sunitinib (13). Our study showed that combination therapy was a feasible way to treat patients. TKIs, together with 6–8 cycles of ICI agents followed by the single use of a TKI, are well accepted by patients and it also reduces patients’ financial burden. One study in China on the cost-effectiveness of pembrolizumab plus axitinib versus sunitinib in the first-line treatment of metastatic RCC showed that pembrolizumab plus axitinib provided an additional 2.461 LYs (1.650 QALYs). The total cost per patient was US$178,725 for pembrolizumab plus axitinib and US$87,693 for sunitinib (14). It is evident that despite its significant treatment effect, combination therapy has a greater cost. Our treatment modality could reduce patients’ economic burden. As for the AEs, all AEs were manageable. One of the strengths of our study was that patients were treated with combination therapy as the second-line treatment, which was not investigated by previous studies.

There are some limitations in our research. Our study included only a limited population of patients from a single center. In addition, this is a retrospective study. Further multicenter and prospective research is therefore required.

TKIs, together with 6–8 cycles of ICI agents followed by the single use of a TKI, are a feasible way to treat metastatic ccRCC patients as second-line treatment.

Reporting Checklist: The authors have completed the STROBE reporting checklist. Available at: http://dx.doi.org/10.21037/tau-21-338

Conflicts of Interest: All authors have completed the ICMJE uniform disclosure form (available at http://dx.doi.org/10.21037/tau-21-338). The authors reported that study is supported by Novartis Pharmaceuticals Corporation in editing the medical writing of the report. The authors have no other conflicts of interest to declare.

Ethical Statement: The authors are accountable for all aspects of the work in ensuring that questions related to the accuracy or integrity of any part of the work are appropriately investigated and resolved. All procedures performed in this study involving human participants were in accordance with the Declaration of Helsinki (as revised in 2013). The study was approved by Fudan University Shanghai Cancer Center (FUSCC) Ethical Committee (No. 050432-4-1911D). Written informed consent from each patient was obtained.