Pelvic fractures make up approximately 3% of all skeletal injuries, and the incidence among admitted trauma patients ranges from 8–9% (1-3). Furthermore, 2% of men with traumatic pelvic fracture have a concurrent pelvic fracture urethral injury (PFUI) (4,5). Improved trauma care and genitourinary reconstruction has led to improved survival and functional status in these patients (5-7). However these injuries can be devastating for men psychologically due to profound impact on their sexual function.

The rates of erectile dysfunction (ED) after pelvic fracture alone range from 5-28%, while the incidence of ED after PFUI is much higher, and varies widely in the literature from 26–76% (8-12). Urethral repair with posterior urethroplasty has demonstrated excellent long-term success rates, but long term erectile and sexual function assessment in these patients has been limited by the way the studies report ED, as mostly binary variables (yes vs. no) (6,13). All previously published rates of ED are from small single-center retrospective studies (14-18). These studies were also mostly limited by the lack of validated metrics, with only one study that used the International Index of Erectile Function (IIEF-5) for classifying ED (19).

Using the Trauma and Urologic Reconstructive Networks of Surgeons (TURNS) database, we sought to quantify erectile and sexual function using two validated questionnaires, the Sexual Health Inventory of Men (SHIM), selected questions from the Male Sexual Health Questionnaire (MSHQ), as well as non-validated questions about penile length and curvature. Also, we sought to accurately define changes in erectile and sexual function that occur following posterior urethroplasty. We hypothesize that the majority of men will have ED and poor sexual function following their injuries and there will be minimal change after posterior urethroplasty. We present the following article in accordance with the STROBE reporting checklist (available at http://dx.doi.org/10.21037/tau-20-1287).

All patients were managed with either endoscopic primary urethral realignment or suprapubic catheter (SPC), followed by delayed posterior urethroplasty repair. Adjunct maneuvers during posterior urethroplasty to achieve a tension free urethral anastomosis were noted and included: (I) abdominal-perineal approach; (II) corporal re-routing; (III) pubic symphysis resection; (IV) corporal splitting; (V) partial prostatectomy. The SHIM has been validated to measure ED in multiple settings and was administered along with the MSHQ, which assesses ejaculatory and other aspects of sexual function (21,22). SHIM & MSHQ data were obtained pre- and post-operatively at each follow-up. SHIM scores range from 1–25, with lower numbers signifying worse ED. To simplify our SHIM categories, the SHIM data were further stratified by the severity of ED: minimal >21, moderate 12–20 (combines both “mild and mild to moderate”), and severe <12 (combines both “moderate and severe”) (23). The MSHQ data obtained was limited to the following questions: how often have you been able to ejaculate, how would you rate the strength of ejaculate, how would you rate the amount of ejaculate, and the bothersome score for ejaculate. Therefore, we did not include a MSHQ composite score. Sexual function was further evaluated using non-validated questions of patient-perceived changes in penile length and curvature both pre- and post-operatively. The study was conducted in accordance with the Declaration of Helsinki (as revised in 2013). The study was approved by the institutional review board of the University of Utah (IRB_00047027) and informed consent was taken from all the patients.

In the 92 patients with questionnaire data available, the median age at injury was 41.7 years (IQR, 30–53.9 years) and median BMI was 26.5 (IQR, 22.9–31.1); mechanism of injury was blunt injury in all patients. The median distraction defect length was 2 cm (IQR, 2–3 cm). The median follow-up was 5.6 months (IQR, 4.1–7.8 months) after urethroplasty. Eight patients required angioembolization to control pelvic bleeding. Suprapubic catheter management just prior to urethroplasty was present in 62% of patients. Twenty-eight patients (30%) reported current or former smoking status (Table 1). 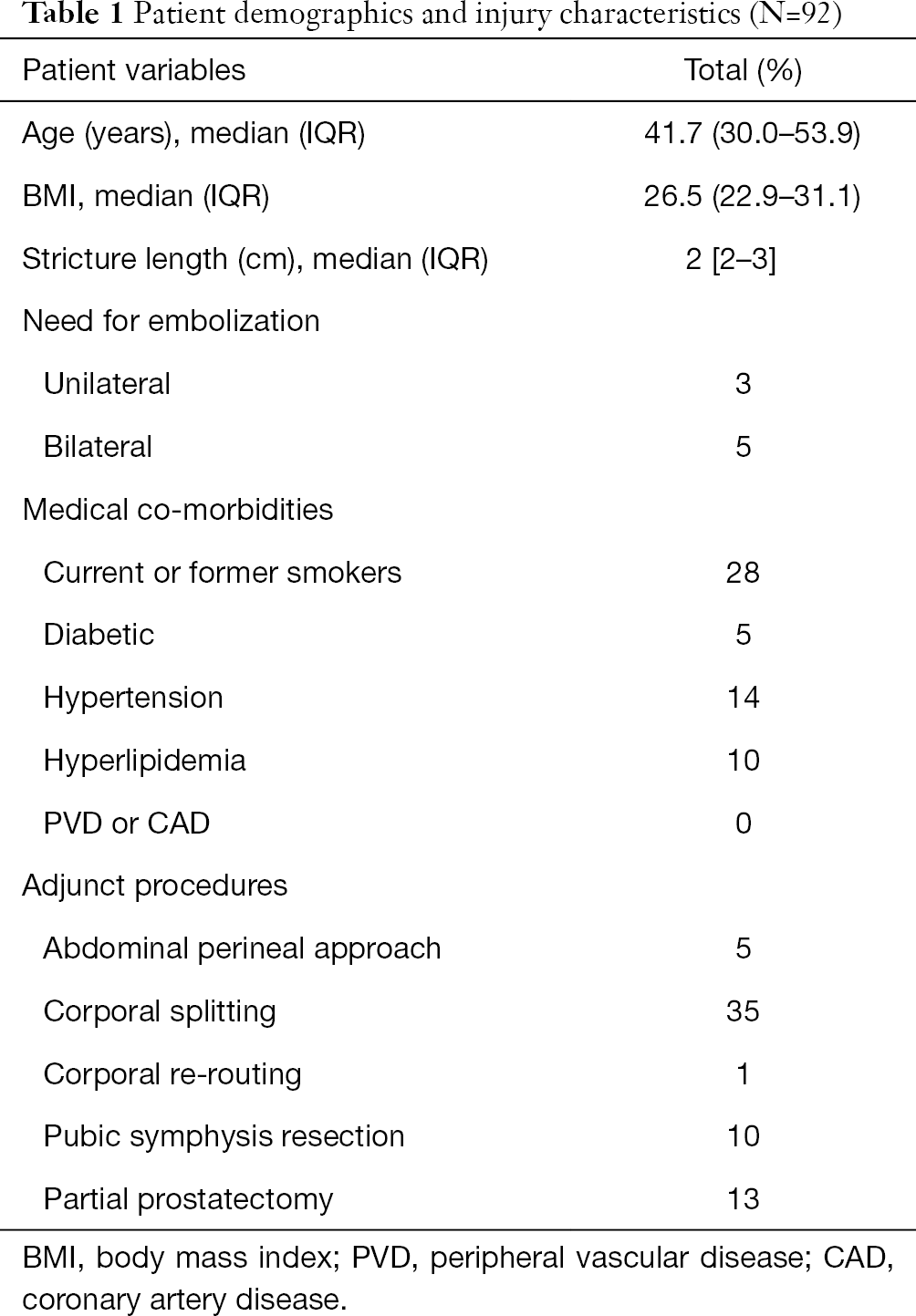 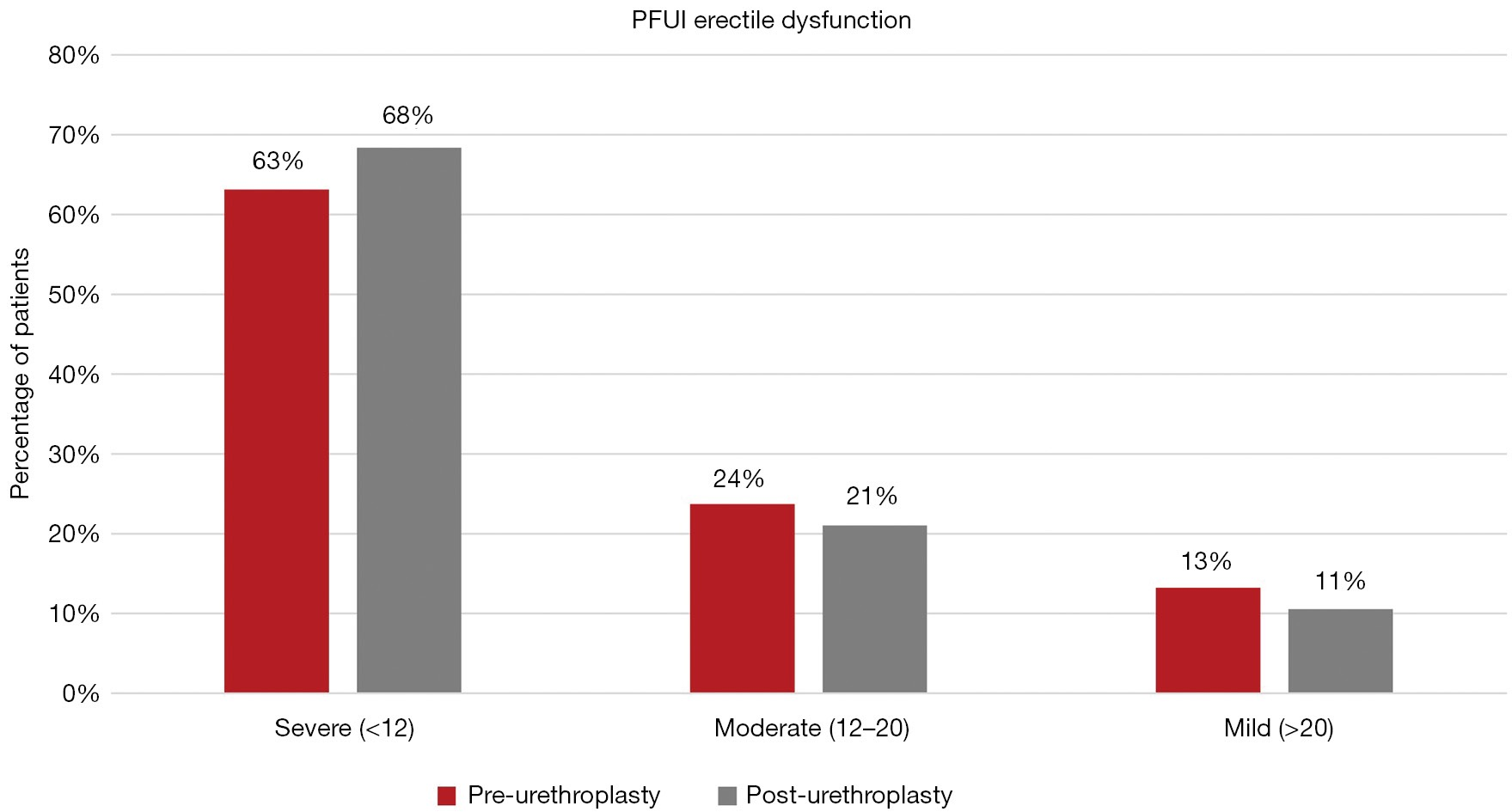 Figure 1 SHIM scores before and after urethroplasty. Only includes the 38 patients who completed both the pre and post questionnaires.SHIM, sexual health inventory of men. 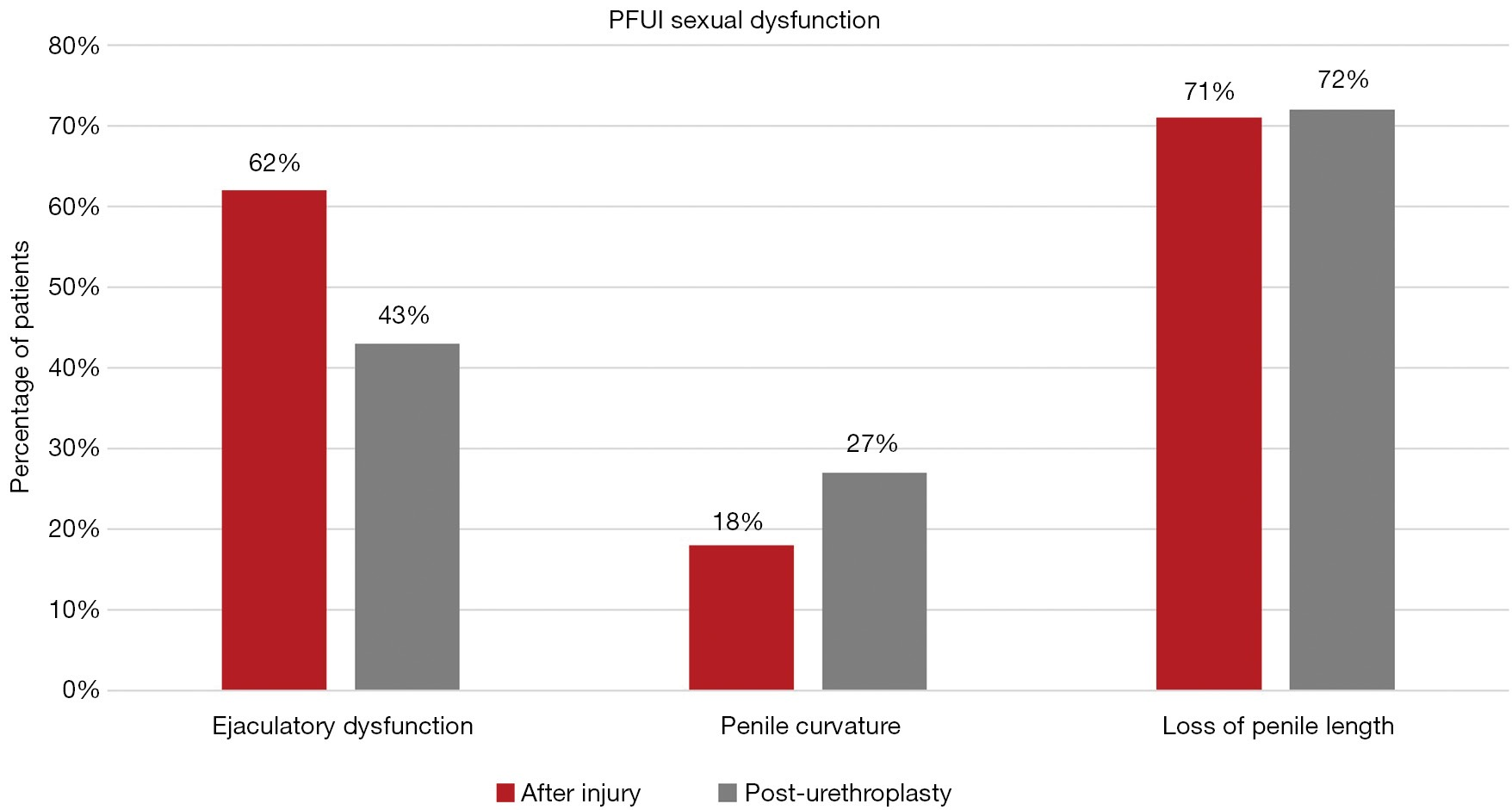 There were 45 (48.9%) patients that needed one or more of the following adjunct maneuvers at the time of surgery, including: corporal splitting (N=35), abdominal-perineal approach (N=5), corporal re-routing (N=1), pubic symphysis resection (n=10), or partial prostatectomy (N=13) (Table 1). There was no significant difference, but there was a trend towards worse post-operative SHIM score when we compared those patients with or without adjunct maneuvers at the time of urethroplasty (mean SHIM 7.6 vs. 10.8, P=0.19). When analyzing the subgroup of patients who underwent adjunctive maneuvers and had completed post-operative SHIM data, we found that adjunct maneuvers were more likely to have severe ED (P=0.043), compared to those without any adjunct maneuvers (Table 2). Suprapubic tube management pre-operatively was also not associated with a significant difference in post-operative SHIM score (SPT mean SHIM 9.5 vs. non-SPT mean 10.4, P=0.72). Four patients underwent microvascular revascularization surgery, with two patients requiring bilateral revascularization. Prior to urethroplasty 3 of 4 patients had a SHIM score of 5, and one patient reported SHIM 12. Unfortunately, 3 of 4 patients did not have follow up SHIM data, and the one patient with post-urethroplasty SHIM remained at 5 (most severe ED). Pelvic angioembolization at the time of injury, either uni- or bilaterally, did not significantly impact the mean SHIM score with all groups averaging SHIM scores in the severe range, and this was similar at both time points (P=0.99).

Using the TURNS multi-center, prospectively collected, database we identified patients with PFUI undergoing posterior urethroplasty and found high rates of severe erectile and sexual dysfunction. In our series, 63% of patients had severe ED after PFUI, and remained high at 68% following definitive surgical repair. While success rates for continence has been well studied, previous reports in these studies did not use validated metrics when reporting ED rates. We also report important sexual dysfunction metrics using the MSQH and non-validated questionnaires, which demonstrated PFUI patients have high rates of ejaculatory dysfunction, perceived loss of penile length, and new and bothersome penile curvature.

The mechanism of ED following PFUI is focused on the direct injury that both lacerates and often avulses the posterior urethra, while simultaneously injuring the penile nerves and arteries as they traverse the pelvic floor posterior to the apex of the prostate prior to entering the penis. There is debate and limited literature as to the contribution of neurogenic injury compared to direct vascular injury, but more evidence suggests that neurogenic ED is the more common etiology. One study supporting the neurogenic injury theory found that 24 of 27 (89%) of impotent men following PFUI responded to intracavernosal vasoactive medications (24). In a separate study, corpora cavernosal electromyogram in 5 of 8 men with PFUI and ED were abnormal despite normal vascular flow on duplex ultrasound (25). Arguments for vasculogenic ED etiology from PFUI are based on arteriographic studies that report occlusion rates as high as 92% of either internal pudendal or internal penile artery (26). Although controversial, revascularization of the internal pudendal arteries was reported to successfully treat ED in 82% of men with bilateral arterial occlusion following PFUI (27). In our study, only four patients (4.3%) underwent microvascular revascularization surgery for ED. Furthermore, the severity of ED was similar for men who required angioembolization during their initial trauma management compared to men without angioembolization. Both findings from our study would support the role of neurogenic ED for men with PFUI, but our study is likely underpowered to definitively describe the etiology of ED.

There is limited data that helps identify which patients will develop sexual dysfunction or ED following PFUI. Predictors of ED on multivariable analysis in pediatric patients, reported by Koraitim et al., included urethral gap distance >2.5 cm and lateral displacement of the prostate (15). Another study by Johnsen et al., found that only high grade urethral injury predicted ED (28). Our study showed mean gap distance of 2.3 cm, and our data did not include the direction of displacement or the American Association of Surgery for Trauma (AAST) Urethral Trauma Grading Scale.

Initial bladder management with either SPC vs. primary endoscopic realignment in the setting of PFUI is hotly debated, and is currently under study by the Multi-institutional Genitourinary Study Group supported by the AAST (29). One of questions in this study examines the impact of bladder management on long-term sexual function. Previous studies, including a meta-analysis have failed to show a significant difference in ED rates based on bladder management after PFUI, although SPC has trended towards higher rates of ED (30,31). One of the major limitations of the previous cohort studies and the meta-analysis was the lack of validated ED questionnaire data. In addition, those men that were treated with urethral realignment may have less severe injuries, creating selection bias and the appearance of better sexual function that is not actually related to their bladder management. In our cohort of men, SPC did not impact the severity of ED based on SHIM scores.

This study has many limitations. Most notably, patient follow-up, survey rates, and the multiple different surgeons can introduce potential uncontrolled biases. With multiple surgeons in the group, individual techniques may not fully be quantified even with this advanced database. Due to the rare nature and complexity of this injury, many of the patients travel great distances to be treated by the TURNS surgeons, and subsequently follow up with local urologists. This contributed to our moderate follow-up time. With a median follow-up time of 6 months, if we extrapolate data from prostatectomy, then it is likely that erectile and sexual function will continue to improve up to 12–18 months following the injury. Previous researchers have proposed that tissue edema, swelling, and inflammation are all causes of ED that may explain the transient deterioration of erectile function after surgery, and which may continue to improve beyond 6 months (35). An insufficient number of patients underwent penile revascularization prior to posterior urethroplasty and for this reason a subset analysis of the effects of revascularization on erectile and sexual function was not possible. We acknowledge that this study would be improved if all patients had complete sexual and erectile function questionnaires both pre- and post-urethroplasty. With this data it may be possible to see differences in functional outcomes based on adjunct maneuvers at that time of surgery, but there are many challenges obtaining sexual and erectile function data in this population.

While the majority of men have severe ED after PFUI, identifying the rare patients with preserved erectile and sexual function following PFUI is imperative for careful surgical planning and pre-operative counseling. We anxiously await results from the AAST randomized clinic trial for initial bladder management in PFUI, and look forward to any recommendations to improve the significant sexual and erectile morbidity experienced by these patients. The management of PFUI patients may benefit from a multi-disciplinary approach, including early referral to mental health. We also advocate for referral to our men’s health clinic for a penile rehabilitation program to help address and mitigate the effects of PFUI on erectile and sexual function.

ED is common after PFUI, with larger defects correlating with worse function. Urethroplasty appears to negatively affect erectile function in select patients. Other aspects of sexual function, including penile length, curvature and ejaculatory function, are also common, underscoring the complex nature of the impact of these injuries on sexual function beyond simple erectile function, and may serve to guide future management strategies in this patient population.

Reporting Checklist: The authors have completed the STROBE reporting checklist. Available at http://dx.doi.org/10.21037/tau-20-1287

Ethical Statement: The authors are accountable for all aspects of the work in ensuring that questions related to the accuracy or integrity of any part of the work are appropriately investigated and resolved. The study was conducted in accordance with the Declaration of Helsinki (as revised in 2013). The study was approved by the institutional review board of the University of Utah (IRB_00047027) and informed consent was taken from all the patients.