Radical cystectomy (RC) with lymph node dissection is regarded as the gold standard for treatment of muscle-invasive bladder cancer. Several randomized controlled trials indicated that minimally invasive surgery, including laparoscopic and robot-assisted radical cystectomy (LRC/RARC), could benefit patients during the peri-operative period with equivalent oncologic results as compared with the open approach (1-5). However, these trials only included extracorporeal urinary diversion and evidence of intracorporeal urinary diversion (ICUD) is sparse.

Enhanced recovery protocols (ERPs) originated from colorectal surgery (6) and have been gradually implemented in other surgeries such as RC (7). High-level evidence for its performance in RC is limited. Only a few studies have reported the outcomes of ERPs implementation on ICUD (8-10).

The impact of body mass index (BMI) on the clinical outcomes of ICUD, including parameters such as operative time, length of stay and complications, has been sporadically reported before (11,12). However, to the best of our knowledge, whether BMI could influence peri-operative albumin level and whether ERPs would optimize the clinical impact of BMI on clinical outcomes have not been examined before. In this study, we retrospectively compared the peri-operative outcomes of patients with BMI <24 or ≥24 kg/m2 and conducted a subgroup analysis for ERPs and conventional recovery protocols (CRPs).

We present the following article in accordance with the STROBE reporting checklist (available at http://dx.doi.org/10.21037/tau-21-171).

A total of 83 patients with bladder cancer underwent LRC with ICUD between March 2014 and September 2020 at our institution. The 83 patients were divided into two groups according to the Chinese BMI criteria. Group A included 37 patients with BMI <24 kg/m2 and group B included 46 patients with BMI ≥24 kg/m2. Subgroup analysis was conducted for ERPs (11 patients in group A1, 18 patients in group B1) and CRPs (26 patients in group A2, 28 patients in group B2). The ERPs of our institution have been performed since April 2017. The detailed elements of ERPs and CRPs are presented in Table 1. The study was conducted in accordance with the Declaration of Helsinki (as revised in 2013). The study was approved by the Institutional Review Board of Beijing Chaoyang Hospital, Capital Medical University (NO.: 2020-Ke-546) and informed consent for this retrospective analysis was waived.

Our institution has performed nearly 500 cases of RC since 2000. LRC was performed using a six-port transperitoneal approach. Our technique has also been previously reported (13,14). Standard lymph node dissection was performed conventionally; extended lymph node dissection was performed when needed. An intracorporeal ileal conduit or Studer orthotopic ileal neobladder was performed in accordance with the surgeon’s opinions and the patient’s preference was also taken into consideration. Modifications to both types of urinary diversions, including procedure adjustment and a novel end-to-end reflux uretero-intestinal anastomosis, have been previously described (13,14). After the ileal conduit, the retroperitoneum was closed so that the conduit and uretero-intestinal anastomosis were totally retroperitonealized. The neobladder was constructed with bilateral isoperistaltic afferent limbs. A single three-lumen catheter and bilateral single-J stents were placed through the urethra without performing a suprapubic cystostomy. 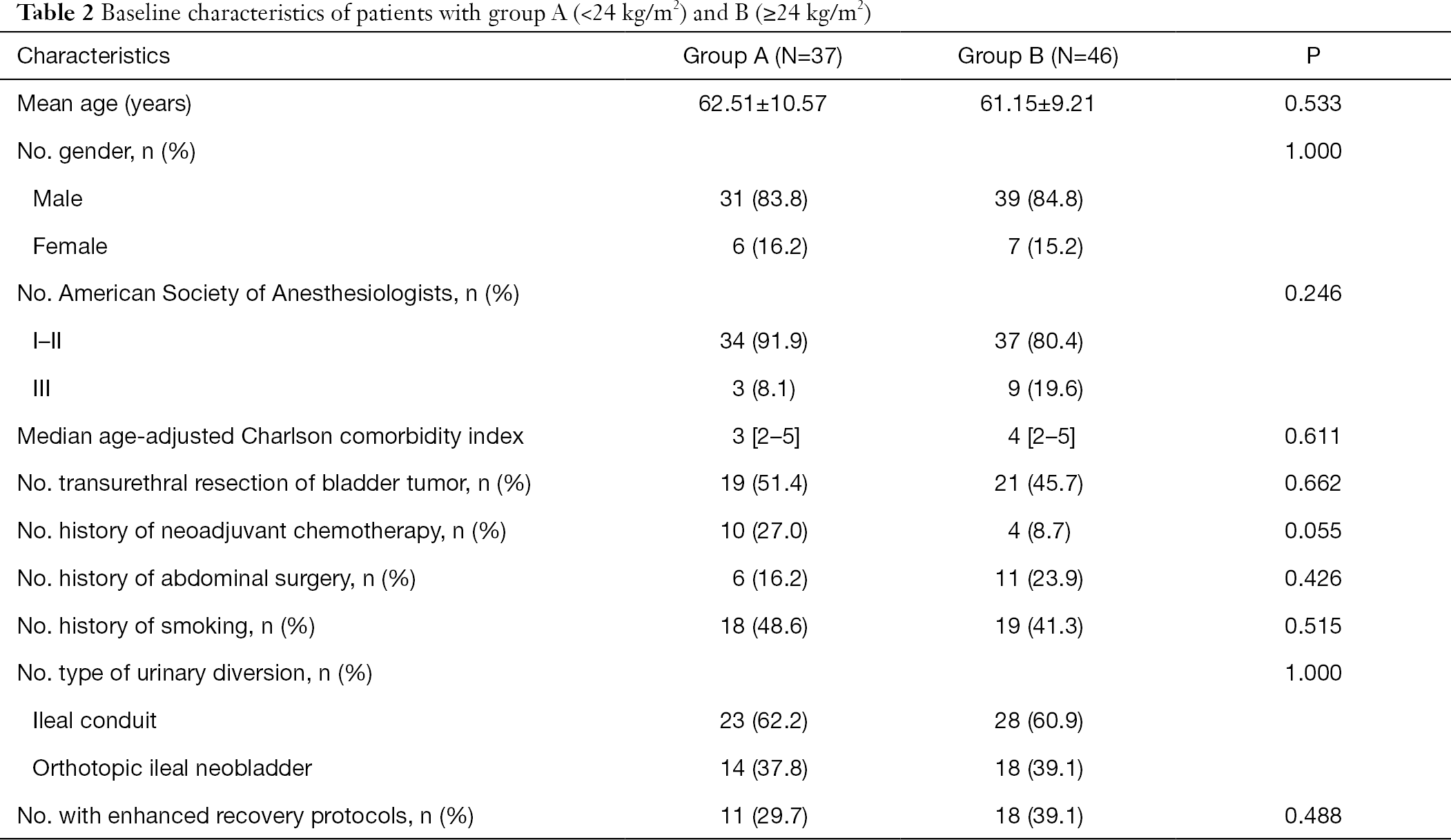 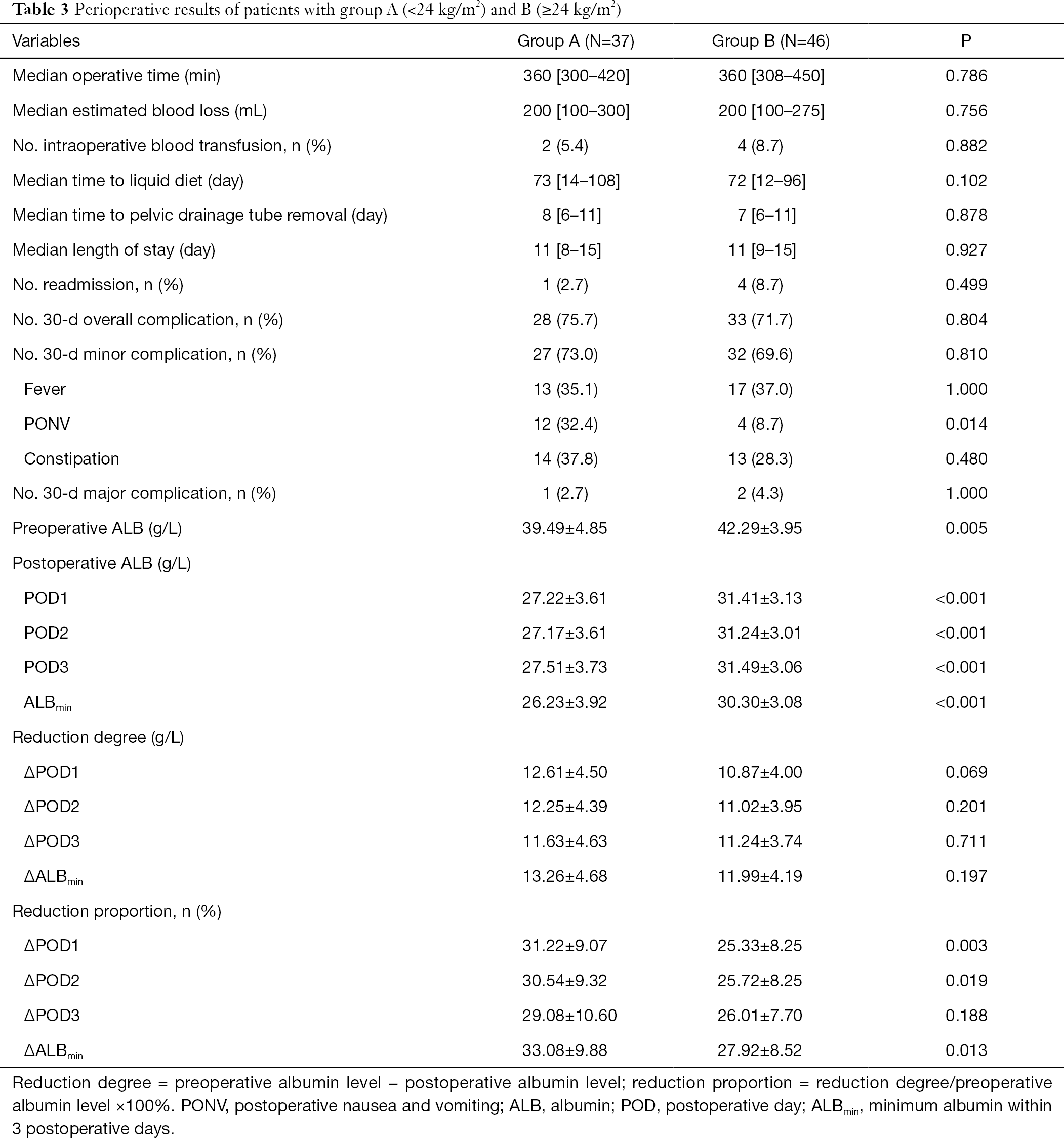 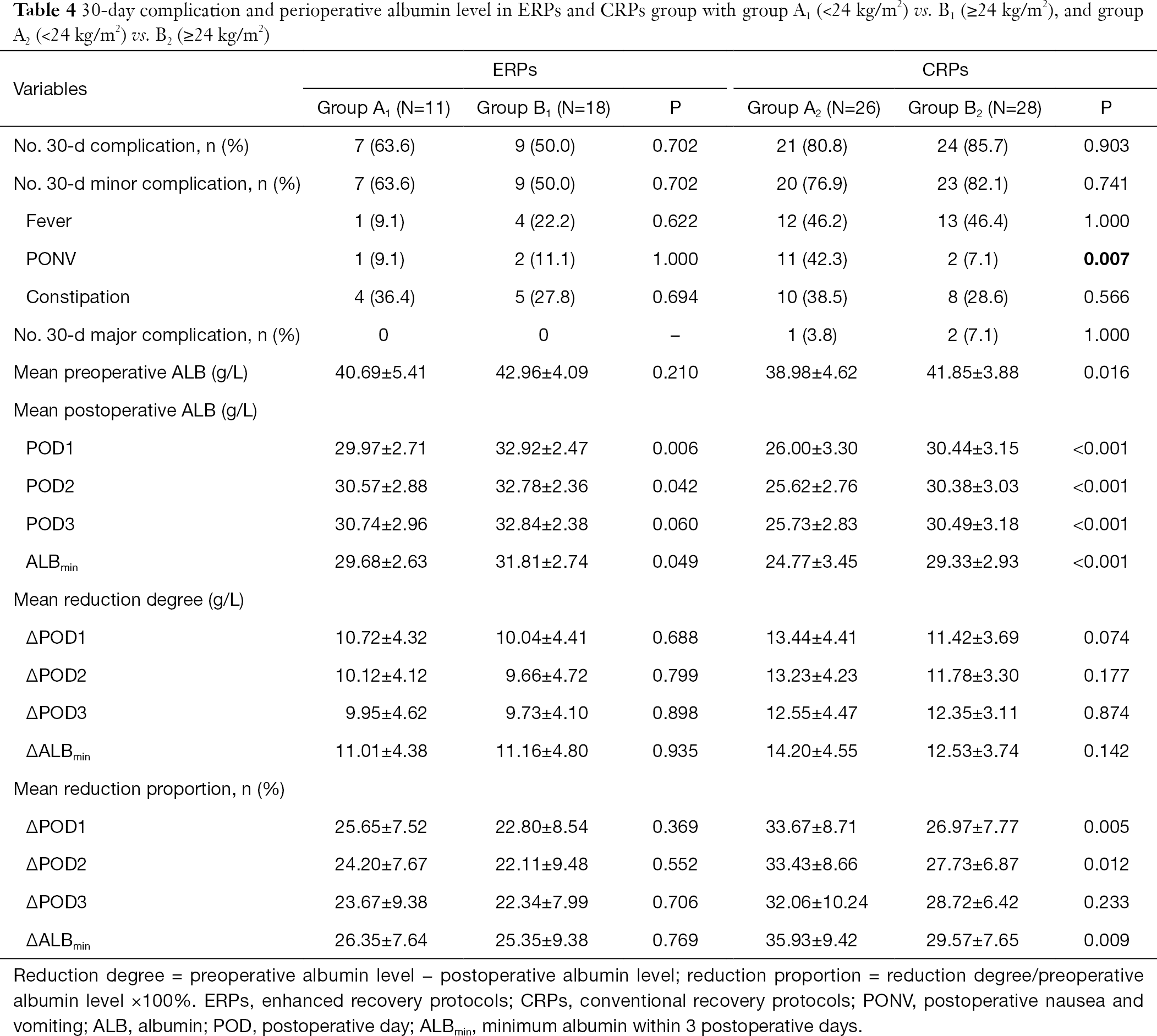 ICUD has been initiated since 2000 (15). Owing to its technical difficulty, the implementation of ICUD is still limited. No randomized controlled trials have been conducted to compare clinical outcomes between intracorporeal and extracorporeal urinary diversion. Research from the International Robotic Cystectomy Consortium indicated that the proportion of ICUD has increased significantly in high-volume centers in North America and Europe over the years. Compared with extracorporeal urinary diversion, ICUD reduced operative time and estimated blood loss but was associated with more complications and readmissions. The complications decreased with increasing surgeon volume, which indicated the learning curve of this technique (16).

The association between BMI and the clinical outcomes in RC has been previously reported. Ahmadi et al. (12) reported the results for RARC with ICUD. They divided the patients into four groups according to BMI (<25, 25–29.9, 30–34.9, ≥35 kg/m2), and found that peri-operative, pathologic, and early oncologic results were all similar among the four groups; therefore, RARC with ICUD could be performed safely and feasibly in obese patients. Bagrodia et al. (17) reported that a high BMI would not increase peri-operative complications and costs in RC. However, several other studies have shown that high BMI has an adverse impact on clinical outcomes, such as higher major complication rate (18), more post-operative ileus (19), higher disease recurrence rate and cancer-specific mortality (20). Ghodoussipour et al. (21) also reported that patients with a high BMI were more likely to experience intra-operative conversion (from planned orthotopic to non-orthotopic urinary diversion).

In our study of LRC with ICUD, most peri-operative parameters, including 30-day overall complication rate, operative time, estimated blood loss and length of stay, were similar between group A and B. An interesting finding was that patients in group A had more PONV, which has rarely been reported in RC in previous studies. Increased BMI was thought to be associated with a higher PONV rate. However, this opinion has been doubted over the past several years, and many studies have found opposite results (22-25). In a recent large-scale study, Kim et al. (25) performed propensity score matching for 103,561 patients who underwent general anesthesia. The results showed that both overweight (25.1–30 kg/m2) and obese (>30 kg/m2) patients experienced less PONV than normal patients (18.5–25 kg/m2). Another study (26) found that during 24–72 h after total hip/knee arthroplasty, patients with a lower BMI would experience more PONV. The mechanism underlying this phenomenon has not yet been clarified. Receptors of dopamine, acetylcholine, histamine, and serotonin participate in inducing nausea and vomiting (27). A study (28) compared 10 obese with 10 normal patients and indicated that the availability of dopamine D2 receptor was significantly lower in obese patients; BMI had a negative impact on D2 receptors. Other studies (29,30) indicated that leptin, which could facilitate histamine release, decreased more significantly in obese-than-normal patients undergoing fasting. Therefore, during peri-operative fasting, a higher reduction of leptin in obese patients may also contribute to this phenomenon.

Another finding was that group A presented lower albumin level pre- and post-operatively and a higher reduction proportion. Univariable analysis showed that a BMI of <24 kg/m2 had an impact on ΔALBmin ≥34%. This finding has not been reported before; therefore, it would be difficult to determine the underlying rationale. We think that the possible reasons included: (I) patients with higher BMI demonstrated better nutritional status, thus elevating baseline serum albumin level; (II) due to different baseline albumin level, even if the reduction degree was similar in both groups, group B demonstrated higher post-operative albumin level and lower reduction proportion; (III) in this cohort, patients with a higher BMI presented lower rates of PONV, which could reduce nutrient loss and avoid prolonged bowel function recovery. Multivariable analysis also indicated that PONV was independently associated with ΔALBmin ≥34% (Table 5); and (IV) it was reported that after intra-operative infusion of 20% albumin, BMI was positively correlated with intravascular half-life of the infused albumin, which indicated a possibility that higher BMI was associated with longer intravascular persistence of albumin (31).

ERPs are considered an evidence-based multi-modal and multi-disciplinary pathway for peri-operative management. It aims to minimize the stress response and optimize the recovery process. ERPs have been introduced in RC in recent years and have shown definite advantages. However, evidence of the implementation of ERPs on ICUD is limited. Koupparis et al. (8) reported the results of a combination of intracorporeal RARC (iRARC) and ERPs, which was compared with open RC with or without ERPs. The length of stay was reduced from 13 to 8 days (P<0.001). The total complication rate was reduced from 48% to 31%, although the difference was not significant. Tan et al. (10) compared the results of open RC and iRARC with or without ERPs. iRARC with ERPs demonstrated a shorter length of stay when compared with iRARC or open surgery alone (7 vs. 11 vs. 17 days, P<0.001). It also presented fewer 90-day overall complications and readmissions (P<0.05).

In our study, comparative results between BMI <24 or ≥24 kg/m2 in the CRPs group were similar to those in the whole cohort. PONV occurrence was 42.3% in group A2 and 7.1% in group B2 (P=0.007). Group A2 also showed lower level of serum albumin pre- and post-operatively and a higher level of reduction proportion (P<0.05). However, the results in the ERPs group were different. PONV was 9.1% in group A1 and 11.1% in group B1 (P=1.000). A multi-institutional, randomized controlled trial (32) from China showed that ERPs demonstrated shorter recovery to bowel movement (88 vs. 100 h), fluid (68 vs. 96 h) or regular diet (125 vs. 168 h), and ambulation (64 vs. 72 h) when compared with conventional treatment. Tan et al. (10) also reported that iRARC combined with ERPs could decrease gastrointestinal complications. Based on these reports and our results, ERPs showed potential advantages in optimizing bowel function recovery and reducing PONV occurrence.

Our study had several limitations: (I) the first of which was its small sample size. When performing subgroup analysis, there would be fewer cases divided into four subgroups; (II) due to the small sample size, we divided the whole cohort into two groups according to BMI (<24 or ≥24 kg/m2), not strictly following the Chinese BMI criteria, which spans from underweight to obese class III; (III) although there were several novel findings in this research, most of them had not been previously reported, such as the association between BMI and peri-operative albumin level, and that ERPs could optimize the impact of BMI on clinical outcomes. The underlying mechanisms are unclear, and we could only explain our results using limited evidence; (IV) multivariable analysis showed a strong correlation between PONV and ΔALBmin ≥34%. However, both of them occurred in the early post-operative period; it was difficult to clarify which one caused the other.

In our research on LRC with ICUD, BMI had no impact on the 30-day overall complication rate, operative time, and length of stay. BMI <24 kg/m2 was associated with higher PONV rate and more albumin loss, both of which could be optimized by ERPs.

We would like to thank Editage () for English language editing.

Reporting Checklist: The authors have completed the STROBE reporting checklist. Available at http://dx.doi.org/10.21037/tau-21-171

Conflicts of Interest: All authors have completed the ICMJE uniform disclosure form (available at http://dx.doi.org/10.21037/tau-21-171). NX serves as an unpaid editorial board member of Translational Andrology and Urology from Mar 2020 to Feb 2022. The other authors have no conflicts of interest to declare.

Ethical Statement: The authors are accountable for all aspects of the work in ensuring that questions related to the accuracy or integrity of any part of the work are appropriately investigated and resolved. The study was conducted in accordance with the Declaration of Helsinki (as revised in 2013). The study was approved by the Institutional Review Board of Beijing Chaoyang Hospital, Capital Medical University (NO.: 2020-Ke-546) and informed consent for this retrospective analysis was waived.