Bladder cancer (BC) is the most common type of malignant tumor occurring in the urinary tract (1). In total, 25–30% of patients with BC are diagnosed with muscle-invasive BC (MIBC) (2). Although radical cystectomy (RC) with extended pelvic lymphadenectomy is the standard treatment for MIBC (3), half of the patients with MIBC develop locoregional recurrence and/or distant metastasis, including the lymph nodes, lung, liver, and bone, within 2 years of surgery (4-6). In addition, the 5-year overall (OS) and progression-free survival (PFS) rates in patients with MIBC are 50–70% (5,6). However, patients who are pathologically diagnosed with T3/T4 BC or lymph node involvement according to the American Joint Committee on Cancer (AJCC) Staging Manual (7) generally have poor prognosis, and their OS rate is only 10–40% (4,5).

To date, postoperative tumor recurrence and progression is a serious problem for patients with MIBC. Neoadjuvant chemotherapy, radiotherapy, and immunotherapy may reduce the possibility of MIBC recurrence and progression. However, it is difficult to develop a systemic treatment strategy for individual patients with MIBC because of the different mechanisms of tumor progression and recurrence (8). Therefore, determination of novel and effective prognostic biomarkers is needed to predict and improve the prognosis of patients with MIBC (8). Wang et al. reported that ribosome-binding protein 1 was associated with BC migration, invasion, and prognosis (9). Several studies have demonstrated that hematological biomarkers, including C-reactive protein (CRP), butyrylcholinesterase (BChE), neutrophil-to-lymphocyte ratio, and platelet-to-lymphocyte ratio, can help predict tumor occurrence and progression (10-12). However, the utility of these biomarkers for the prediction of oncological outcomes in MIBC has not been completely explored.

Ghrelin, a novel hormone, increases appetite and growth hormone secretion. It has two different forms—acyl (AG) and desacyl ghrelin (DG) (13). The roles of ghrelin include stimulation of food intake, promotion of carbohydrate utilization, regulation of adiposity, regulation of insulin secretion, and control of blood glucose level (14). Serum ghrelin also regulates processes associated with cancer, including cell proliferation, apoptosis, cell migration, cell invasion, and angiogenesis (15). However, the precise role of ghrelin in the regulation of a number of processes related to cancer progression, especially MIBC, is unclear (16). Thus, we aimed to evaluate the impact of serum ghrelin levels on survival in MIBC patients receiving chemotherapy.

We present the following article in accordance with the TREND reporting checklist (available at http://dx.doi.org/10.21037/tau-20-1489).

In this study, we reviewed the clinical and pathological records of 56 patients who were diagnosed with MIBC between November 2015 and November 2019 at Gifu and Hirosaki University Hospitals. We focused on 27 patients who had received chemotherapy and collected blood samples before and after chemotherapy. Informed consent was obtained from all participants. Eligibility criteria for participation in this study were as follows: histologically confirmed MIBC without distant metastases; Eastern Cooperative Oncology Group (ECOG) performance status of 0–1; adequate bone marrow function (absolute neutrophil count ≥1,500/m3 and platelet count ≥100,000/m3), adequate renal function (creatinine <2.0 mg/dL and/or creatinine clearance >40 mL/min), and adequate hepatic function (total bilirubin <1.5 mg/dL). Patients who had previously received radiation therapy to the urinary bladder or pelvis before surgery were excluded.

The study was conducted in accordance with the Declaration of Helsinki (as revised in 2013). The study was approved by the Institutional Review Board of Gifu University (2018-212) and Hirosaki University (2017-1108) and informed consent was taken from all the patients.

All treatments were performed at our institutions. The chemotherapy regimen consisted of 1,000 mg/m2 of gemcitabine (GEM) administered on days 1, 8, and 15 and 70 mg/m2 of cisplatin (CDDP) or carboplatin (CBDCA), with an area under the curve of 5 according to Calvert’s formula, on day 2 (17). Each treatment cycle lasted for 21–28 days. The patients received at least two cycles of chemotherapy. The patients were identified as CDDP ineligible if they met at least one of the following criteria: ECOG performance status of 2, creatinine clearance <60 mL/min, hearing loss grade ≥2, neuropathy grade ≥2, and/or New York Heart Association Class III heart failure (18).

The diagnosis of MIBC was confirmed by pathologists at our institution by reviewing the results of transurethral resection. Tumor staging was performed according to the staging system defined in the AJCC Staging Manual (7).

All patients underwent CT or MRI every 3–6 months until disease progression according to the findings of the radiological evaluation, which was performed after administration of chemotherapy.

The primary endpoint was PFS. PFS was defined as the time from chemotherapy to the appearance of locoregional and/or distant metastasis on CT.

Data were analyzed using Statistical Package for the Social Sciences software version 24.0 (IBM Corp., Armonk, NY, USA). Categorical and continuous variables were compared using the chi-square test and the Kruskal–Wallis test, respectively. Survival after chemotherapy was analyzed using the Kaplan–Meier method. Survival according to subgroup was analyzed using the log-rank test. The cutoff values for covariates were defined as the minimal value for (1 − sensitivity)2 + (1 − specificity)2 according to the area under the receiver operating characteristic curve (19). All P values were two sided, and a P value of <0.05 was considered significant.

The demographic data of patients who were classified into two groups according to the status of locoregional and/or distant metastasis are listed in Table 2. 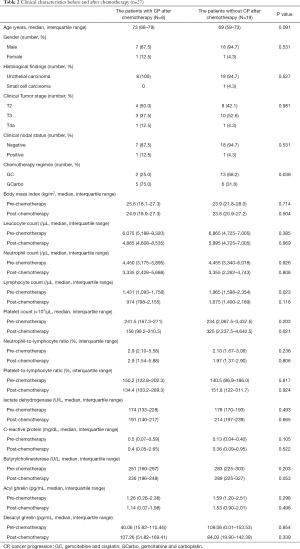 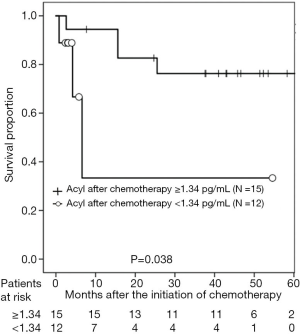 Figure 1 Kaplan–Meier estimates of progression-free survival (PFS) in patients with muscle-invasive bladder cancer after chemotherapy according to acyl ghrelin (AG) levels. The PFS rate was significantly higher in the patients with AG levels ≥1.34 pg/mLthan in those with AG levels <1.34 pg/mL (P=0.038). 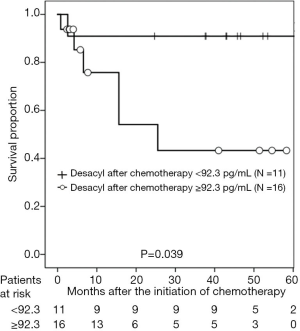 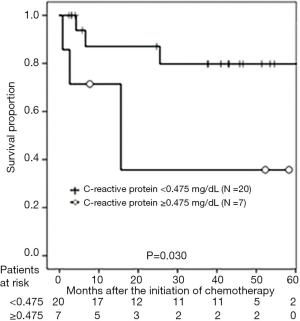 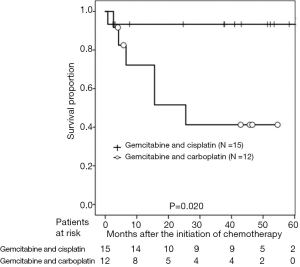 To our knowledge, the current study is the first to evaluate the relationship between serum ghrelin levels and oncological outcomes in patients with MIBC who received chemotherapy. In our previous study, we identified BChE as a potential biomarker for the prediction of MIBC patient prognosis despite normal liver function with or without hepatic involvement (10). BChE may also be physiologically relevant for the hydrolysis of ghrelin (14). Additionally, BChE may be a key regulator of ghrelin in the peripheral circulation with widespread impacts (20). On the contrary, ghrelin affects physiological functions and pathological states, including insulin release, adiposity, energy homeostasis, and the development and progression of several types of cancers (20). Therefore, we investigated the association between serum ghrelin levels and PFS in patients with MIBC.

Ghrelin is a 28-amino-acid peptide that stimulates the release of pituitary growth hormone. It was discovered as an intrinsic ligand for the growth hormone-secretagogue receptor in 1999 (13,20). Ghrelin is mainly produced in the stomach. It has two forms—AG, which is catalyzed by ghrelin O-acyltransferase, whereas DG has no such modification (21). In general, the blood concentration of DG is approximately 4–5 times higher than that of AG (22). AG is recognized as an orexigenic peptide and has several characteristic functions, including secretion of growth hormone, promotion of food intake, gastrointestinal motility, secretion of gastric acid, weight gain, and strong anti-inflammatory action (13,23-25). Conversely, DG is an anorexigenic peptide, and its mechanism of action is different from that of AG, including promotion or suppression of food intake (an anti-arteriosclerotic effect), suppression of inflammatory cell infiltration, protection against muscle atrophy, and neuroprotection (23,24).

Ghrelin expression was recently identified in a wide range of normal tissues, including those in the stomach, duodenum, colon, hypothalamus, pituitary, pancreas, placenta, lung, cardiomyocytes, ovaries, and testes (15). Similarly, ghrelin is expressed in various malignant tumor tissues, including those in digestive tract, lung, thyroid, breast, prostate, testicular, pancreatic, and renal carcinomas (15). Grönberg et al. investigated the expression of ghrelin and obestatin protein in 137 patients with breast cancer (26). Immunoreactivity of ghrelin and obestatin was positively correlated with the patients’ estrogen receptor status, but it was negatively associated with tumor size, tumor grade, and Ki-67 index (26). Therefore, ghrelin could be a useful prognostic marker for breast cancer due to the correlation between expression levels of ghrelin and survival rates (26). Colorectal cancer cells produce significantly more ghrelin than normal colonocytes (27). Therefore, the tissue expression levels of ghrelin may be highly correlated with the development of more advanced tumors (27). In genitourinary cancer, ghrelin expression has also been observed in the sites of renal cell carcinoma metastasis, including the bones, lungs, adrenal glands, and intestines (28). In prostate cancer cell lines, ghrelin and DG inhibited the proliferation of DU-145 cells, displayed a biphasic effect in PC-3 cells, and were effective against LNCaP cells (29).

The present study has few limitations. First, as this study was a retrospective study, there is an inherent potential for bias. Second, this study has a key weakness in that a small number of patients were enrolled and the follow-up period was relatively short.

This study suggested the usefulness of the ghrelin as a prognostic predictor of PFS in patients with MIBC. Further studies are warranted to determine the usefulness of serum ghrelin as a potential biomarker to predict oncological outcomes, especially OS, in patients with MIBC. Further research is also necessary to determine the role of AG and DG in MIBC.

Funding: This study was supported by the following grants-in-aid for Scientific Research from the Japan Society for the Promotion of Science: 17K11118.

Reporting Checklist: The authors have completed the TREND reporting checklist. Available at http://dx.doi.org/10.21037/tau-20-1489

Conflicts of Interest: All authors have completed the ICMJE uniform disclosure form (available at http://dx.doi.org/10.21037/tau-20-1489). The authors have no conflicts of interest to declare.

Ethical Statement: The authors are accountable for all aspects of the work in ensuring that questions related to the accuracy or integrity of any part of the work are appropriately investigated and resolved. The study was conducted in accordance with the Declaration of Helsinki (as revised in 2013). The study was approved by the Institutional Review Board of Gifu University (2018-212) and Hirosaki University (2017-1108) and informed consent was taken from all the patients.