Extracorporeal shock wave lithotripsy (ESWL) has been used widely due to its relatively high efficacy and non-invasive nature for treating urinary stones (1). ESWL has a satisfactory treatment effect, particularly for ureteral stones <1 cm. ESWL can replace invasive treatment using a ureteroscope, and the European Association of Urology (EAU) guidelines suggest ESWL as the first treatment option for stones <1 cm (2,3).

The success rate of ESWL depends on various factors, such as stone (location, density, size, and components), renal anatomy (hydronephrosis, calyceal diverticulum, ureteral obstruction and stenosis, and urinary anomaly), and patient-related factors (skin-to-stone distance, obesity, and renal function) (4). Also, various methods to improve the success rate of ESWL have been studied. A shock wave frequency of 60–90 shock waves/min improves the stone-free rate (SFR), and tissue damage decreases with a low shock wave frequency (5,6). Recent studies recommend increasing the power step-by-step, as this ramping technique improves stone fragmentation and reduces renal injury during ESWL (7-11). Additionally, medical expulsive therapy (MET) is efficient for relieving pain and the passage of a stone (12); however, the types of shock waves generated by other methods are not successful (9).

We retrospectively analyzed patients who had undergone ESWL for ureteric stones at our hospital from September 2018 to February 2020. During the study period, a total of 172 patients underwent ESWL for the first time, of which 150 patients excluding renal stones were included in the study. The ESWL procedure was delayed if the patient had a urinary tract infection.

We used the Dornier Compact Delta/Sigma model as the ESWL device, and this electromagnetic model can confirm intensity (a–c and 1–3, Table 1). ESWL was practiced as a ramping technique, but if patients complained of pain, we stopped increasing the intensity. We used the last continuous intensity for analyses. About 3,000 shocks were delivered at a frequency of 70–80/min. No analgesia was provided during the procedure. Patients who had proximal ureter stones were treated in the supine position, otherwise mid and distal ureter stones were treated in the prone position to avoid bony structures. Targeting was performed mostly by fluoroscopy.

All patients underwent a baseline evaluation of the kidneys, ureter, and bladder (KUB) and an abdominopelvic computed tomography (CT) (non-enhanced or enhanced) scan. The maximum diameter of the stone, location of the stone, skin-to-stone distance (SSD), and average Hounsfield units (HU) were evaluated. The SSD was calculated on the CT scan using three measured distances from the center of the stone to the skin (0°, 45°, and 90°). The average SSD was obtained from these values and marked as the representative SSD for each stone. Average HUs were calculated on the CT scan using the mean attenuation of three consistent areas (0.02 cm2) (13). In addition, patient characteristics, including age, sex, body mass index (BMI), and estimated glomerular filtration rate (eGFR), which can affect treatment outcomes, were also assessed. Pain was recorded as no pain, mild, or severe. We also investigated the use of alpha blockers. Most patients were followed up 7 days after ESWL, for a check of the KUB or for a CT scan. If a stone was <4 mm or disappeared, we regarded it as a success. All radiological factors were read by a radiologist in the genitourinary division of the radiology department of our institution. This reader was unaware of the clinical findings and analyzed the images independently. If ESWL repeatedly failed or the patient had severe pain due to stones, we considered surgery.

The data were examined to identify clinical and radiological factors that were correlated with treatment outcome. The success or failure of ESWL was confirmed according to the session, and the factors affecting treatment outcomes were analyzed using a logistic regression model. A univariate analysis was used to individually assess the association between the various factors and treatment outcomes. Thereafter, variables that were significant (P<0.2) in the univariate analysis were included in a multivariate logistic regression analysis to identify the independent predictors of treatment outcomes. All statistical tests were two-sided, and a P value <0.05 was considered significant. Data were analyzed using IBM SPSS Statistics Version 24 software (IBM Corp., Somers, NY, USA). We also examined the characteristics of the stones that had been removed endoscopically under general anesthesia due to failed ESWL.

This study was conducted in accordance with the Declaration of Helsinki (as revised in 2013). This study was approved by our institutional review board (IRB No. UUH-2020-06-002) and individual consent for this retrospective analysis was waived. 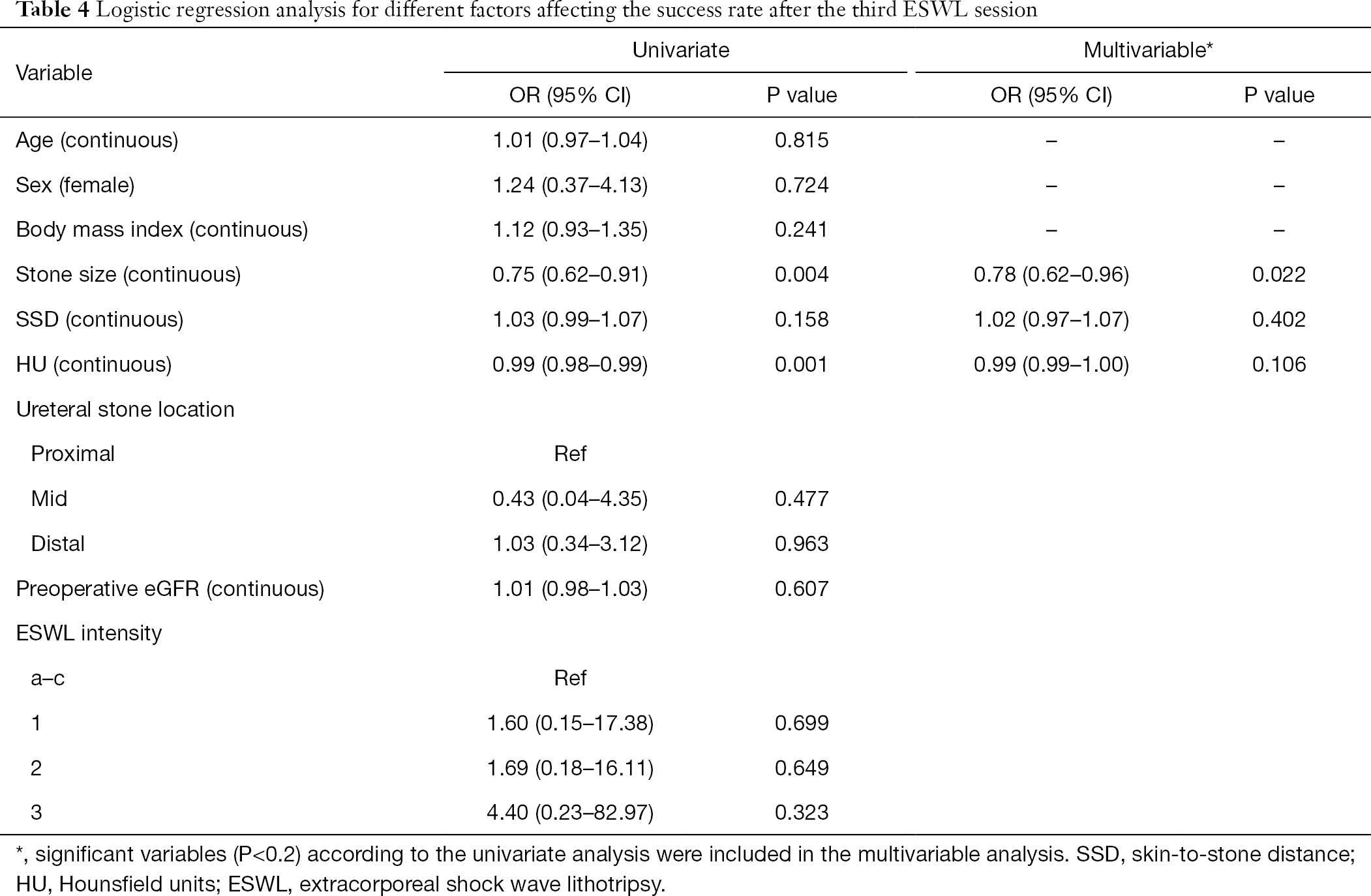 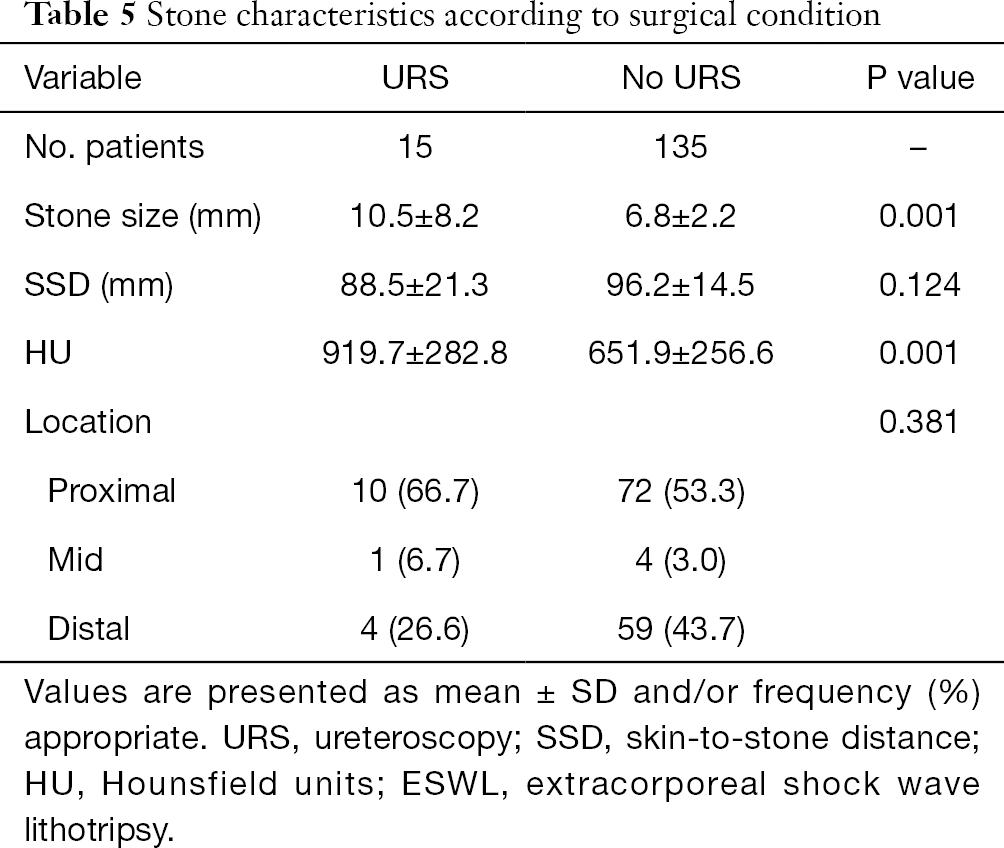 Clinicians generally believe that high intensity ESWL can induce a high SFR, but intensity did not affect the SFR in this study. A repeat procedure increased the SFR about 90% in this study. Although ESWL is a very safe procedure, it rarely causes life-threatening complications, such as renal hematoma or surrounding organ injuries. Therefore, it is not recommended to try every stone treatment completely during only one procedure with high and risky energy levels. What is more important than intensity is using the energy ramping technique. A fixed ESWL intensity has an obvious disadvantage, called the screening effect, whereby the powder generated and fine fragments by the cavitation bubbles and stress waves cluster around the residual stones to attenuate and scatter the shock waves (14-16). Thus, the “ramping technique” of gradually escalating intensity was introduced. It was hypothesized that this technique strengthens the formation of cavitation bubbles and recompenses for the screening effect (11,14). This method prepares the patient to adapt to the sense of SWL. Then, according to the EAU guidelines, the ramping technique produces less renal damage, with level 1b evidence (3). A randomized study using a stepwise voltage ramping protocol versus a fixed power group in 418 patients reported that the ramping technique causes fewer renal hematomas (5.6%), compared with fixed power (13%) (17). The reason for this safety is that the initial low shockwave energy constricts the renal vessels, making the kidney less susceptible to damage during the following application of a higher energy intensity (18,19).

Stone size was inversely proportional to the ESWL result. Many studies have reported that stone size is a significant factor related to SFR after ESWL (20-22). In particular, ESWL more frequently fails for stones >10 mm. The results of treating stones <10 mm are superior in all locations of the ureter to those of stones >10 mm (3,21). In our study, stone size was a significant factor not only in the first session, but also in the third session with a high success rate of 90% in the multivariate analysis for predicting the success rate.

The density of calculi on an axial CT image has also been studied as a predictor of the fragmentation and treatment outcome (10). The relationship between stone density and the degree of fragmentation was first reported in vitro. As the density of a stone increases, more shockwaves are needed to break the stone (23). Similarly, in several clinical studies, more than three ESWL sessions were required in patients with stone densities >750 HU compared to those with stone densities ≤750 HU (24). In addition, several researchers have reported that ESWL is more likely to fail in patients with a stone density >750–1,000 HU, and these patients should consider other treatment modalities (25,26). In our series, the HU of the stone was also a significant predictor for the first ESWL session. Several ESWL session were unsuccessful in cases of stones with a high HU, and endoscopic removal was often performed. Thus, we should be prepared for ESWL failure if a stone is >10 mm and 1,000 HU.

According to several studies, SSD is an important predictor of treatment outcome for ureteral stones (27,28). If the distance to the stone increases, the energy transfer decreases due to fat distribution. A cutoff SSD >10–12 cm predicts ESWL failure in most cases. In our series, SSD was not a significant factor for predicting ESWL success. The patients in our study usually had a low BMI (23.3±4.5 kg/m2), so it was difficult to generate a difference due to the short SSD (95.6±15.2). In addition, it may be difficult to determine the difference because a proximal stone, which is difficult to pass, has a shorter SSD than a distal stone. More research will confirm the importance of SSD in the treatment of ureteral calculi, regardless of the stone location.

Although the investigators did not know the value when determining ESWL or analyzing the results, this study included potential weaknesses because of its retrospective nature. Another limitation is that CT cannot be used to evaluate success after the procedures. CT detects urinary calculi with very high accuracy and it seems to be the method of choice for detecting residual stones. Confirmation of ESWL results through a KUB X-ray increases the success rate. In contrast, considering the limitations of plain films, the occurrence of residual stones may be higher due to bowel gas, feces, and soft tissue overlap. This current study, like most ESWL research, has the same problem. It is not known whether these results translate to different types and brands of ESWL. This is the first study to analyze success rates according to ESWL intensity. That is, this study is an important basis for safe ESWL without unnecessary increases in ESWL intensity. Further studies with more patients and a higher ESWL intensity will confirm these results.

Stone size and HU affected the ESWL success rate, and several ESWL sessions or endoscopic removal was often required when stones were large with high HU. ESWL intensity was not significantly related to the success rate, so intensity should be adjusted according to patient pain and the degree of stone fragmentation.

Reporting Checklist: The authors have completed the STROBE reporting checklist. Available at http://dx.doi.org/10.21037/tau-20-1397

Conflicts of Interest: All authors have completed the ICMJE uniform disclosure form (available at http://dx.doi.org/10.21037/tau-20-1397). The authors have no conflicts of interest to declare.

Ethical Statement: The authors are accountable for all aspects of the work in ensuring that questions related to the accuracy or integrity of any part of the work are appropriately investigated and resolved. This study was conducted in accordance with the Declaration of Helsinki (as revised in 2013). This study was approved by our institutional review board (IRB No. UUH-2020-06-002) and individual consent for this retrospective analysis was waived.