Prostate cancer is the common malignancy worldwide. In Japan, about 10% of patients with prostate cancer have distant metastases (1-3). For half a century, the standard for the initial treatment of hormone naïve metastatic prostate cancer (mHNPC) has been androgen deprivation therapy (ADT) (4). ADT includes orchiectomy, luteinizing hormone-releasing hormone analog (LH-RHa) therapy, and combined androgen blockade (CAB) including LH-RHa together with anti-androgen agents such as bicalutamide. Several guidelines do not recommend CAB therapy for patients with mHNPC as a first-line (5-7) therapy because no level 1 evidence supports the superiority of CAB as a primary treatment for mHNPC. In contrast, nearly 70% of mHNPC patients in Japan were treated initially with CAB (8) because a large-scale retrospective study suggested the advantage of using CAB to treat Japanese mHNPC. Nevertheless, there is no conclusive evidence suggesting which treatment is the optimal one as a baseline ADT for mHNPC (5-7). Although Japanese Urology Association (JUA) recommends CAB as one of the standard treatments (9), clinical benefits of CAB over the LH-RHa monotherapy are not understood.

In this study, we retrospectively compared the therapeutic effect of CAB with that of LH-RHa monotherapy as a primary treatment for mHNPC. We present the following article in accordance with the STROBE reporting checklist (available at: http://dx.doi.org/10.21037/tau-20-966).

We performed the present retrospective, multicenter study in accordance with the ethical standards outlined in the Declaration of Helsinki (revised in 2013). The ethics review boards of the Hirosaki University School of Medicine (authorization number: 2017-089) and all hospitals approved the protocol.

We analyzed the following parameters: patients’ age, Eastern Cooperative Oncology Group performance status (ECOG-PS), initial prostate-specific antigen (iPSA) levels at the time of cancer diagnosis, Gleason score (GS), extent of disease (EOD), and CHAARTED high-volume disease at the time of diagnosis. EOD were used to evaluate the extent of bone metastasis, the grades were EOD 0, normal or abnormal due to benign bone disease; EOD 1, <6 metastases; EOD 2, 6–20 metastases; EOD 3, >20 metastases but not a superscan; and EOD 4, superscan. CHAARTED high-volume disease was defined as the presence of visceral metastases or bone metastasis ≥4 with at least one bone metastasis must be present outside the vertebral bodies and pelvis in accordance with the CHAARTED study (16). Metastatic status was detected with computed tomography and bone scintigraphy before ADT. We also investigated the progression to castrate-resistant prostate cancer (CRPC), treatment history with docetaxel (DTX), abiraterone acetate (AA) and/or enzalutamide (ENZ), estramustine, and bone-modifying agents (BMA) during ADT treatment. The indication of these treatments according to the personal choice of the physician in charge of the case. The definition of CRPC in this study was based on the recommendations made by the prostate cancer clinical trial working group (17).

All of the participating patients were treated initially with ADT and/or BMA. After CRPC diagnosis, alternative anti-androgen therapy, estramustine, chemotherapy (DTX or CBZ), AA or ENZ were applied as treatment according to the personal choice of the physician in charge of the case.

We evaluated data of 809 Japanese patients with mHNPC who were initially treated with ADT obtained from multiple databases that included Michinoku Japan Urological Cancer Study Group database (n=667) and from Hirosaki University-related hospitals’ databases (n=142). We excluded 292 out of 809 participants because of either insufficient data (n=213), or surgical castration monotherapy and anti-androgen monotherapy performed (n=79). After all the exclusion criteria were applied, we used data from 517 cases (CAB group had 447 cases, LH-RHa monotherapy group had 70 cases) in this study. Also, we excluded 60 cases for the CRPC-free survival (CRPC-FS) analysis (n=457) because of the lack of data (Figure 1). 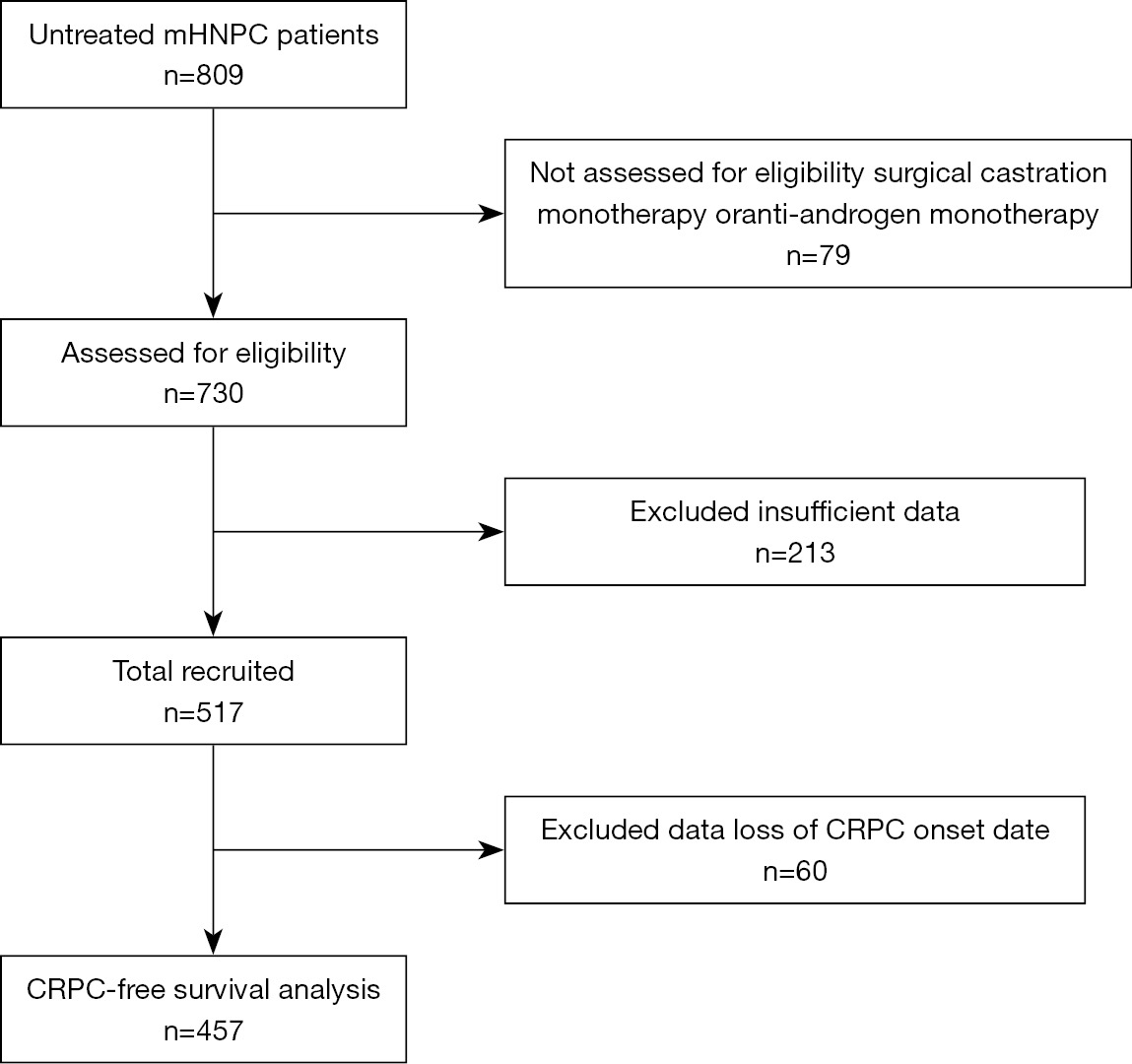 Baseline patients’ characteristics are shown in Table 1. The median age of patients was 73 years. The patient proportions of GS ≥8, EOD ≥2, CHAARTED high volume disease were 89%, 56%, and 63%, respectively. 303 patients developed CRPC and 160 patients died within a median follow-up period of 28 months. There were no significant differences between the two groups either in age, iPSA, GS, EOD, CHAARTED high-volume disease, or progression to CRPC. In contrast, there were significant differences in ECOG-PS (P=0.047), treatment with DTX (P=0.004), treatment with BMA (P=0.020), and follow-up period (P<0.001). 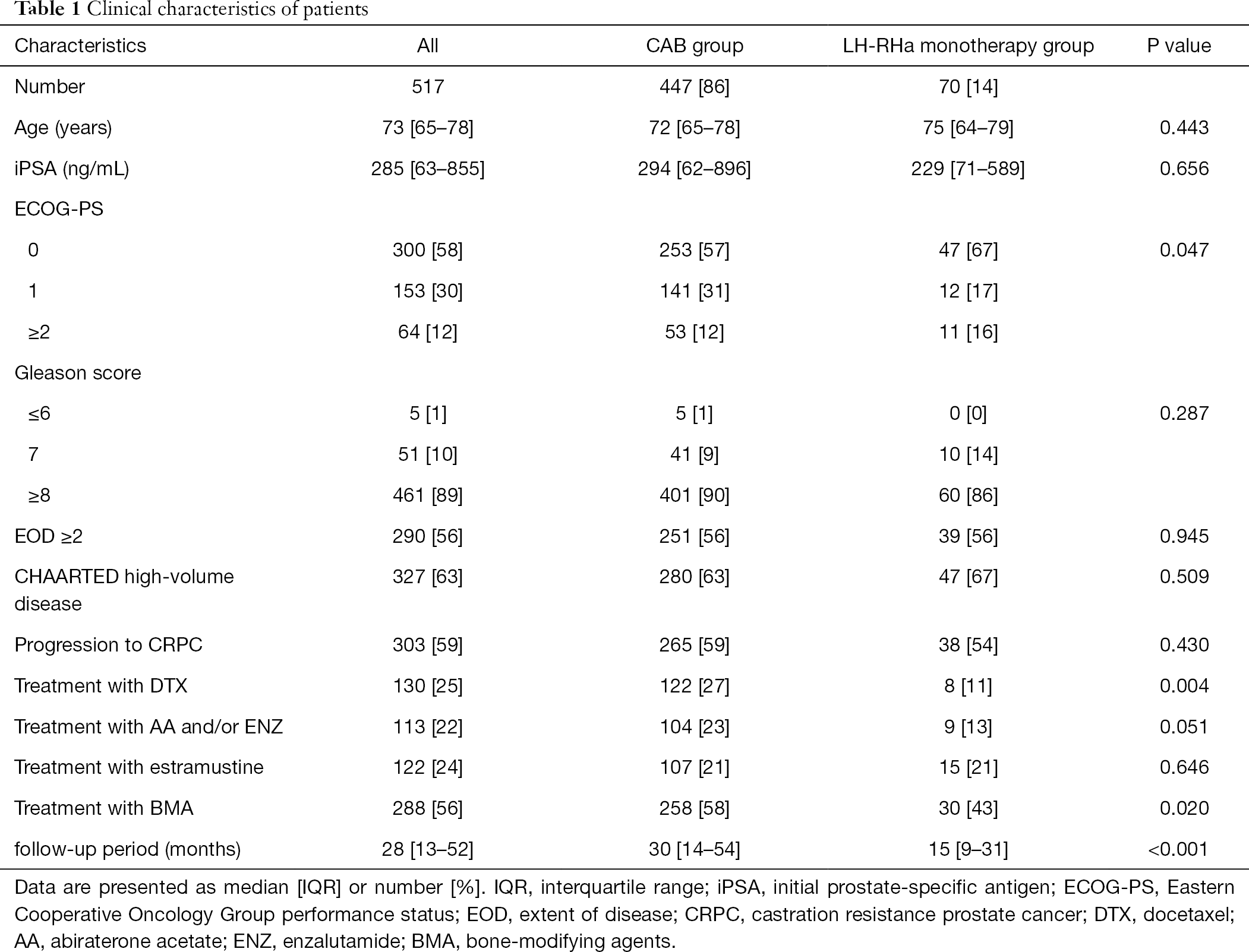 Uni- and multivariate analyses for prognosis 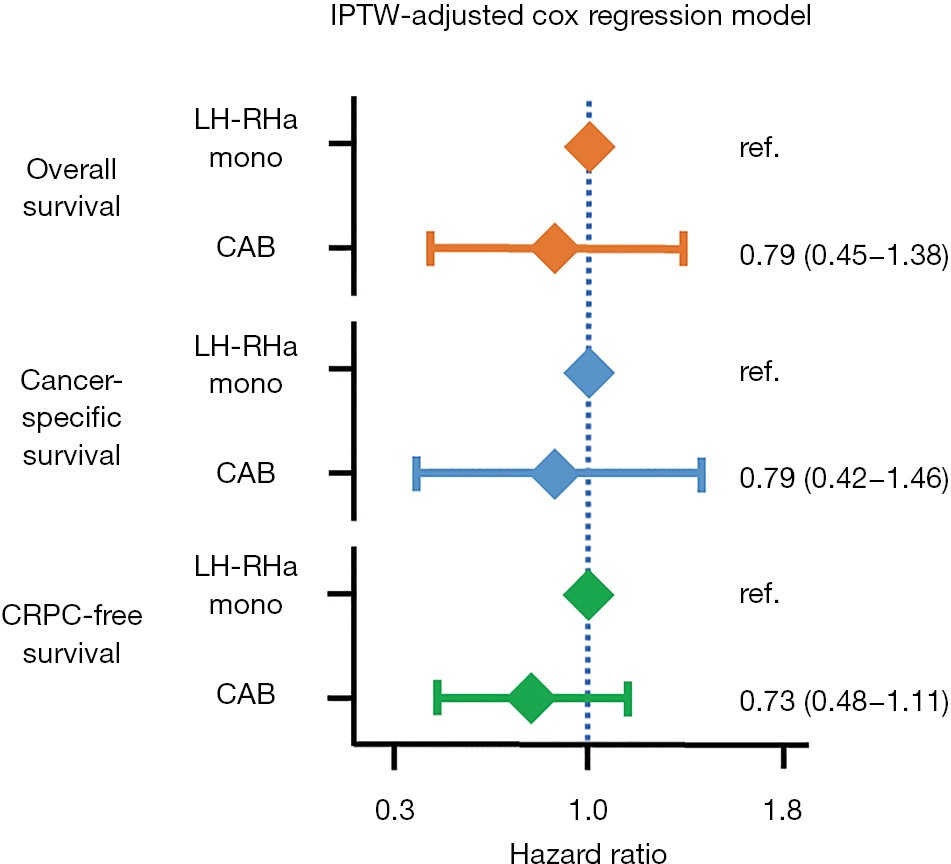 In this study, we compared the clinical outcomes of between two treatments: CAB and LH-RH monotherapy in the real-world practice in Japan and observed no statistically significant differences in either OS, CSS, or CRPC-FS between the two groups. Although several studies suggested the potential association between the racial differences and the efficacy of ADT (19,20), our results showed similar outcomes with those demonstrated for the patients from Western countries (21,22).

Previous meta-analysis comparing CAB and LH-RHa monotherapy for patients with mHNPC (6,821 men in 21 randomized trials) showed no significant differences in OS (21). Another meta-analysis (8,275 men in 27 randomized trials) showed that CAB may improve five-year OS up to 2.9% as compared with LH-RHa monotherapy in advanced prostate cancer (P=0.005). However, while the participants of this meta-analysis included 12% of patients with locally advanced prostate cancer, there was no subgroup of patients with mHNPC included in this analysis (22). Due to the lack of evidence of CAB effectiveness for mHNPC treatment, several guidelines in Western countries do not recommend CAB for mHNPC as a first-line therapy (5-7). Our observations supports the guidelines recommendations used Western countries.

Why is 70% of mHNPC patients treated with CAB in Japan (8) without strong evidence of the superiority of CAB? It has to be debated why clinicians in Japan support the clinical benefits of CAB. First, clinicians may prescribe an anti-androgen agent combined with LH-RHa as an initial treatment to prevent testosterone “flare-up” phenomenon. It is believed that LH-RH agonists cause a transient rise in serum testosterone levels, and thereby induce “clinical flare” such as prostate cancer growth, increase bone pain, voiding problems, and spinal cord compression (25,26). European Association of Urology guideline states, “Offer initial short-term administration of antiandrogens to mHNPC patients treated with a LH-RH agonist to reduce the risk of the ‘flare-up’ phenomenon” on weak evidence (6). Furthermore, clinicians should also be aware that several studies have failed to prove the existence of “flare-up” phenomenon (27-29). From this point of view, a short-term administration of antiandrogen would be enough to prevent testosterone “flare-up”.

Our study has limitations such as small sample size, short follow-up period, over-weighted effects of minority groups that are far from the center of the patient background of the IPTW method (Figure S4), selection biases for CAB and LH-RHa monotherapy, lack of data of testosterone levels after hormonal therapy, lack of the detailed information on post-treatment, no central review of pathological evaluation, the lack of information on treatment regimen and period of an anti-androgen agent administration, and the lack of ADT-related adverse events evaluation. However, our results suggest the limited efficacy of CAB over LH-RHa monotherapy in Japanese patients with mHNPC.

In conclusion, we observed no significant differences in oncological outcomes between CAB and LH-RHa monotherapy as initial treatments for patients with mHNPC.

We would like to thank Itsuto Hamano, Teppei Okamoto, Naoki Fujita, Hiromichi Iwamura, Yuki Fujita, Yukie Nishizawa, and the entire staff of the Department of Urology in Hirosaki University for their invaluable help with the data collection. The authors would also like to thank Editage (www.editage.jp) for the English language review.

Reporting Checklist: The authors have completed the STROBE reporting checklist. Available at http://dx.doi.org/10.21037/tau-20-966

Conflicts of Interest: All authors have completed the ICMJE uniform disclosure form (available at http://dx.doi.org/10.21037/tau-20-966). Drs. TN, Shingo H, SN, TS, SK, KM, YA, AI, NT, TH, and CO report grants from Japan Society for the Promotion of Science, during the conduct of the study. The other authors have no conflicts of interest to declare.

Ethical Statement: The authors are accountable for all aspects of the work in ensuring that questions related to the accuracy or integrity of any part of the work are appropriately investigated and resolved. All procedures performed in this study were in accordance with the Declaration of Helsinki (as revised in 2013). The study was approved by institutional ethics board of Hirosaki University school of Medicine (authorization number: 2017-089) and all hospitals approved the protocol. Informed consent was taken from all the patients.