Smoking status and pathological response to neoadjuvant chemotherapy among patients with bladder cancer: a pooled analysis

Bladder cancer is now widely recognized as a threat to global development. In 2017, 474,000 and 197,000 individuals newly developed bladder cancer and died from the malignancy, respectively (1). Bladder cancer causes more than 3 billion disability-adjusted life years (1). Neoadjuvant chemotherapy (NAC) before radical cystectomy (RC) has been established as a better treatment modality based on level 1 evidence (2). Patients after NAC have improved better survival rates than patients who did not undergo NAC (3). Pathological downstaging for patients who undergo NAC can be a surrogate factor for the outcome of the patients and chemosensitivity (4). Despite the adverse health effect of cigarette smoking, particularly its carcinogenic effects, the World Health Organization reported that there are still 1.1 billion individuals who smoke. Smoking is the most common risk factor for bladder cancer (BC), accounting for more than 50% of BC cases (5,6). Tobacco smoke carcinogens play a critical role in bladder cancer development (5); accordingly, smoking cessation can improve the outcomes of patients with bladder cancer (7,8). However, there have been few studies about the influence of cigarette smoking on the efficacy of NAC, and the results are conflicting. Some studies showed that cigarette smoking was significantly associated with adverse pathological response in patients treated with NAC followed by RC (9). Further, compared with former smoking and never smoking status, current smoking was the strongest risk factor for disease recurrence (9). In contrast, some researchers argued that smoking status and complete pathologic response were not significantly associated from a statistical point of view (10). Thus, given these conflicting findings, it remains unclear whether smoking status influences the pathological response and oncological outcomes in bladder cancer patients treated with NAC followed by RC. This pooled analysis aimed to investigate whether smoking status is an independent risk factor for pathological response, recurrence, and prognosis in bladder cancer patients who undergo NAC. We present the following article in accordance with the PRISMA reporting checklist (available at http://dx.doi.org/10.21037/tau-20-1086).

This study was conducted in accordance with the PRISMA guideline, and the study protocol of this pooled review was registered in the PROSPERO (International Prospective Register of Systematic Reviews). We searched PubMed, Web of Science, Embase, Cochrane Library, and Google Scholar for related articles published until November 2019 using the MeSH) keywords “Neoplasm, Urinary Bladder,” “Neoadjuvant Therapies”, and “Smoking Behaviors.” The study selection flowchart is shown in Figure 1. The references of the identified studies were also reviewed manually to further identify any related studies.

We selected articles based on the following four criteria (PICOS principle). First, the study population should include bladder cancer patients treated with neoadjuvant therapy followed by RC. Second, for intervention and comparison, information about smoking status should be included. Third, for outcomes, the pathological response or oncological outcomes including overall survival (OS), recurrence, or cancer-specific mortality (CSM) should be reported. Fourth, the study should be a cohort or case-control study. In total, 2001 articles were initially reviewed after removing duplicates. Eventually, 10 articles that met the inclusion criteria were included in the study; of these, 9 articles were retrospective studies and 1 was a phase II trial.

In total, 1,382 patients from 10 studies were included in this pooled analysis (9,10,12-19). With respect to the follow-up time, most of the patients reached their end point. The majority of the patients included in our analysis were male (89%) from North America. All the patients were pathologically diagnosed with MIBC from T2N0M0 to T4N0M0. We make separate analysis because not all studies contain the data of both complete response and partial response. The characteristics of the included articles are shown in Table 1. All the results are shown in Table 2.

Smoking status as predictor of pathological response to NAC

The heterogeneity (I2 <50%) was low in OS analyses. Hence, a fixed-effect model was used. The results showed that smoking status was not correlated to the OS of bladder cancer patients who undergo NAC (OR =0.71, 95% CI: 0.28–1.80, Figure 3A). In addition, another two studies that compared between current smokers and nonsmokers showed that there is no evidence of association between smoking status and OS (OR =1.10, 95% CI: 0.77–1.55). Similarly, there was also no statistical evidence of former smoking having an influence on OS compared to nonsmoking (OR =0.87, 95% CI: 0.64–1.18) (Figure 3B). 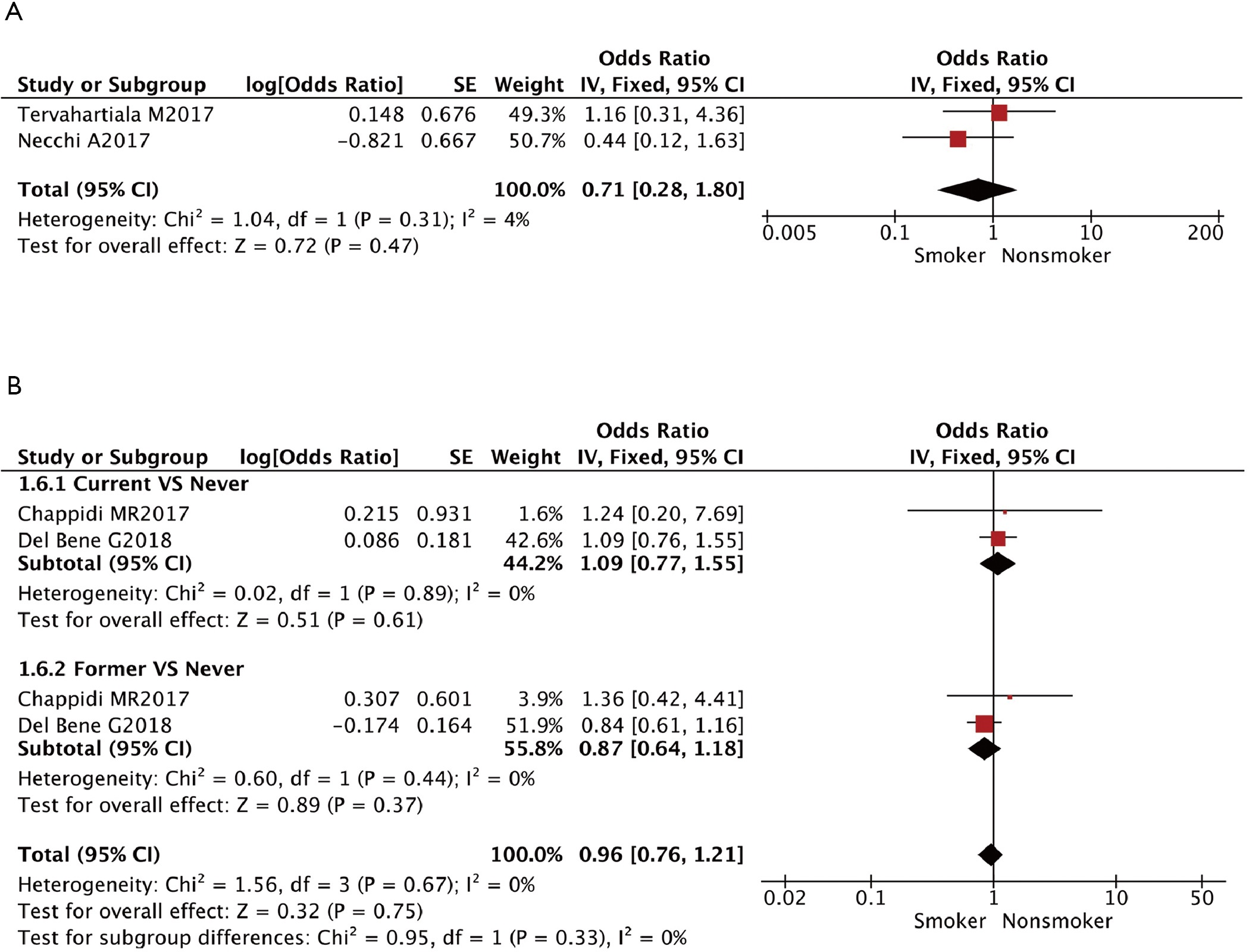 Influence of smoking status on recurrence and CSM

Figure 4 Pooled analysis of studies that examined the associations of smoking with (A) recurrence and (B) cancer-specific mortality (CSM).

There is sufficient evidence supporting that cigarette smoking is associated with the development of various cancers (26-29). All forms of tobacco smoking increase the risk of cancer development, and the components of cigarette influence the efficacy of chemotherapy drugs (23,30). Smoking can also negatively affect oncological outcomes among patients who undergo neoadjuvant therapy (21). However, although the association between smoking status and lung cancer has already been established (31), there has been no systematic analysis on the impact of smoking on the outcomes of bladder cancer patients who underwent neoadjuvant therapy, partly because of insufficient data. Two studies on the association between smoking status and NAC in bladder cancer obtained contrasting findings (9,10). One revealed that smoking behavior was significantly associated with adverse pathological response, and smokers had a higher risk of no response to NAC than never smokers (9). In contrast, the other one did not find any significant associations between smoking and pathologic response or cancer-specific outcomes after NAC and RC (10).

The patients who achieve complete response will obviously achieve a better outcome than those without complete response. Even partial response could still be beneficial (4). Because treatment response to neoadjuvant therapy is a crucial influencing factor of survival outcomes, the association between smoking status and the prognosis of patients who undergo neoadjuvant therapy indicates that smoking behaviors probably lead to a worse pathological response (9).

Our study investigated the association between OS and smoking status. Compared to studies on pathological response, there are considerably fewer studies focusing on the role of smoking in recurrence because its influence is yet to be acknowledged. Further, results have been conflicting. Whereas some studies on bladder cancer reported that current smoking is an independent factor for recurrence (9), some studies indicated no association between smoking status and recurrence (10). Two studies included in this pooled analysis reported no significant association between smoking and recurrence, regardless of current or former smoker status. More studies with a large sample size and longer follow-up time are needed to clearly establish the influence of smoking status on the risk of recurrence. Further research will be helpful to better understand the impact of smoking on bladder cancer pathogenesis.

Most cancers can be influenced by smoking status. One study reported that the incidence, mortality, and prognosis of bladder cancer are associated with smoking status (32). However, there is no evidence indicating an association between smoking status and bladder cancer treated with neoadjuvant therapy to date. This is because most studies lack a more detailed analysis of smoking behaviors (e.g., intensity and duration), as some researchers have already reported that the impact of cigarette smoking is cumulative, and cigarette exposure lasting more than 20 years can significantly change the outcome. In the current pooled analysis, despite the small number of studies, smoking behaviors were found to be significantly associated with a higher rate of mortality. This could be because of several reasons. First, most of our included studies are from North America, which could have led to a geographical bias, because of the race (4,33). Second, cancer histology can also influence survival outcomes in patients undergoing neoadjuvant therapy. Those with pure urothelial carcinoma have better survival than patients with mixed tumor type. One study included in the current pooled analysis showed that patients with pure urothelial bladder cancer have 10 times better survival outcomes than those with mixed type bladder cancer (17,34). Body mass index also influenced the outcome of our analysis. Obese patients showed a higher risk of developing bladder cancer (35).

There are several limitations in our study. First, the number of patients in some of the analyses was limited. Second, most of the included studies evaluated obtain smoking status using interviews, questionnaires, and patient records; thus, the possibility of information bias could not be eliminated. Despite these limitations, we believe that our pooled analysis is valuable because to our best knowledge, this is the first study to report that smoking status can influence the pathological response to NAC in bladder patients and lead to a worse prognosis. Further well-designed studies with large population size are warranted to verify the association between smoking status and the prognosis of bladder cancer patients who undergo NAC.

Smoking has a negative impact on the prognosis of bladder cancer patients who underwent NAC, limiting its efficacy with respect to pathological responses. Further, although smoking was not significantly correlated with OS, recurrence, and CSM, there was a tendency toward an increased risk for worse outcomes among smokers. Thus, smoking status should be given more importance when developing treatment plans and evaluating efficacy, particularly of NAC, among bladder cancer patients.

Reporting Checklist: The authors have completed the PRISMA reporting checklist. Available at http://dx.doi.org/10.21037/tau-20-1086

Conflicts of Interest: All authors have completed the ICMJE uniform disclosure form (available at http://dx.doi.org/10.21037/tau-20-1086). Dr. XZ serves as an unpaid editorial board member of Translational Andrology and Urology from Mar 2015 to Feb 2021. The other authors have no conflicts of interest to declare.