Renal cell carcinoma (RCC) is common solid cancer (1). The most frequent site of metastasis and recurrence is the lung, with more than half of patients developing lung metastases (2,3). Anaplastic lymphoma kinase (ALK) rearrangement has been reported in various tumors, including in anaplastic large cell lymphoma, non-small cell lung cancer (NSCLC), and colonic adenocarcinoma. ALK rearrangements are seen in 3–7% cases of nonsmall cell lung cancer (NSCLC) (4) and in 2 of 534 (<1%) RCCs (5). ALK rearrangement is the most common type with a wide variety of ALK fusion partners having been discovered (3). EML4 is the predominant fusion partner gene of ALK found in lung adenocarcinoma (4 to 7% of cases), while KIF5B is the second common in frequency (0.5%) (6). Except EML4 and KIF5B, other fusion partner genes, such as BIRC6 (7), TFG (8), SEC31A (9), HIP1 (10), TPR (11), DCTN1 (12) and KLC1 (13), have been identified as oncogenic events. Currently, ALK inhibitors approved by the National Medical Products Administration (NMPA) include crizotinib, and the median progression-free survival with first-line crizotinib is 17.6 months (14). Other clinical trials, including PROFILE 1029 and PROFILE 1014, showed that crizotinib demonstrated significantly improved PFS, ORR, and PROs and had a distinct safety profile that was tolerable and manageable (15,16). Crizotinib improved PFS independent of age, sex, ECOG PS, tumor histological type, and type of platinum-based chemotherapy. However, crizotinib has not been reported for the treatment of renal cell carcinoma complicated by lung metastases.

Detection of ALK rearrangements in patients with non-small cell lung cancer has recently become a routine pathological diagnosis. Several highly efficient therapeutic ALK inhibitors including crizotinib, alectinib, ceritinib and lorlatinib, almost always provide remarkable benefit to the patients. Fluorescence in situ hybridization (FISH), real-time reverse transcription-PCR (RT-PCR), and immunohistochemistry (IHC) (17) are three major conventional diagnostics for ALK fusions. Here, we reported a case for ALK fusions by combining FISH analysis and IHC assay, and collaborative testing with WES revealed the genomic features of ALK-RCC. In addition, the genetic characteristics of ALK-RCC were revealed by comparing its genetic data to that of RCC patients without ALK rearrangement. Based on computed tomography (CT) scan, we aimed to investigate the responsiveness of ALKRCC to crizotinib.

We report a female patient born in 1984, who had a clinical history of renal space-occupying lesion which was discovered by a pregnancy check-up in September 2010, leading to a right nephrectomy in July 2011. Computed tomography (CT) scan and postoperative pathological findings confirmed the morphology of papillary RCC (Figure S1A,B). The patient received interferon α therapy for nearly 6 months. Regular re-examination did not indicate any sign of recurrence in the past few years, except a slight increase in CA125 levels. In August 2018, the CA125 level suddenly elevated to 805.3 U/mL. Subsequent positron emission tomography (PET)-CT revealed retroperitoneal multiple lymphadenopathy with increased metabolism, along with multiple nodules in bilateral lungs with increased metabolism (Figure 1A), which suggested tumor metastases. For this progression, lung biopsy under the CT guidance and subsequent pathological examination were performed. While waiting for the pathological results, the patient started treatment with sunitinib. During the treatment, adverse events, including fever, waist soreness, and hematochezia, in addition to abnormal laboratory results for transaminase, white blood cells, and red blood cells, were observed and deemed intolerable. One month later, a diagnosis of clinical stage IV (TxN0M1) metastatic RCC was made (Figure 1B). The immunohistology (IHC) staining showed tumor cells with positivity for ALK, programmed cell death-ligand 1 (PD-L1), paired box 8 (PAX8), vascular endothelial growth factor 2 (VEGFR2), and tuberous sclerosis 2 (TSC2). The Ki-67 score was 60%. The Ventana IHC (Ventana automated IHC with Ventana ALK-D5F3 detection kit) revealed an ALK-positive result (Figure 1C,D), which was then further confirmed by ALK break-apart FISH where results showed ALK rearrangement (Figure 1E,F). Therefore, starting in November 2018, sunitinib was replaced by crizotinib therapy (250 mg, twice/day). During this treatment, the patient had a very good performance status [Eastern Cooperative Oncology Group (ECOG) 1], and no adverse events were observed. Follow-up CT scans revealed a partial response in October 2019 (Figure 1A). The patient is still under treatment with crizotinib, and a stable disease state was revealed by a CT scan in December 2019 (Figure 1A). 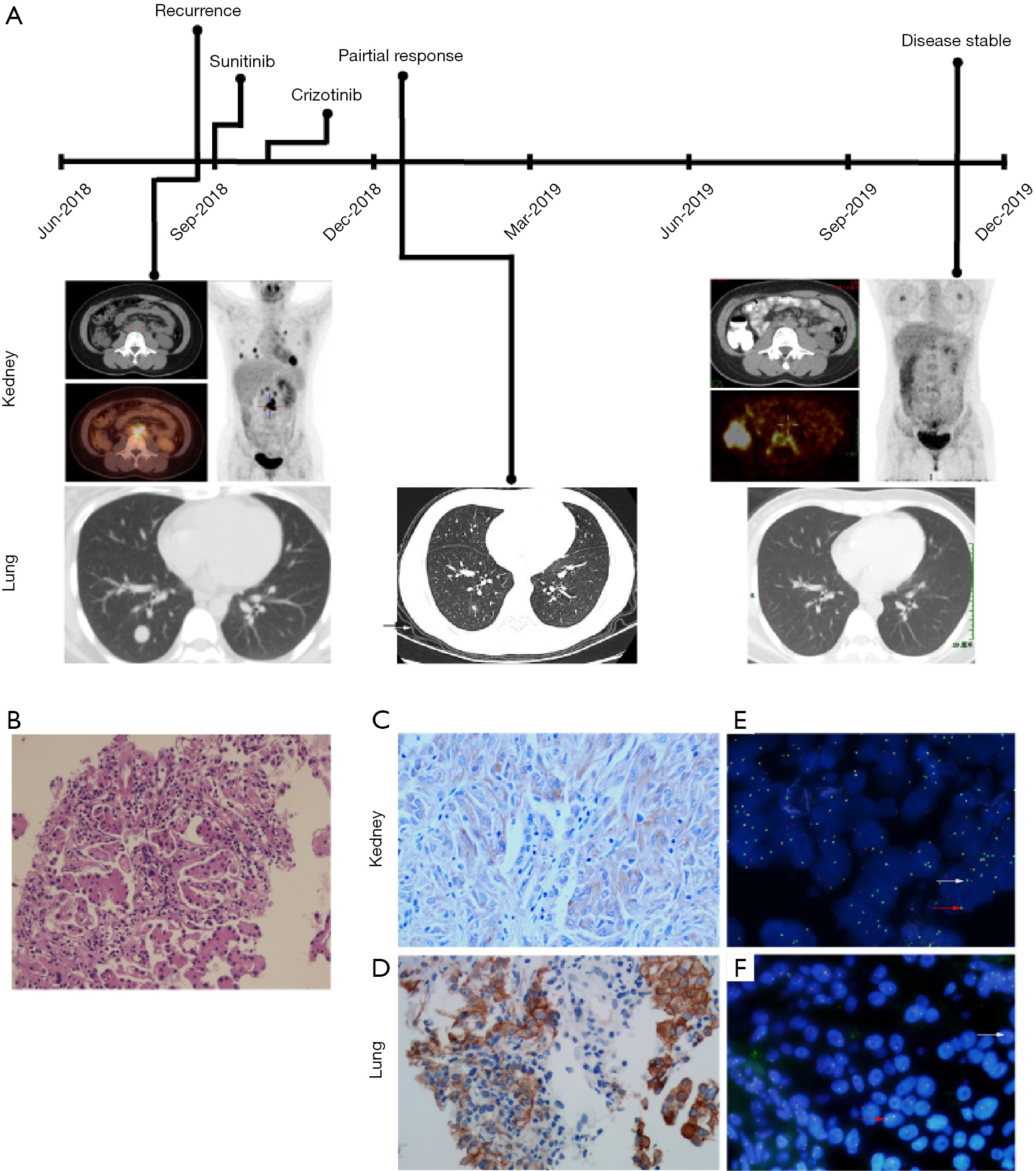 ALK fusion is rare in RCC, and the genomic features remain unclear. To clarify this, whole exome sequencing (WES) was performed, the genetic data of the primary tumor were obtained, and a co-existing gene mutation, DNMT3A, was detected. Due to the limitation of WES, the gene fusions could not be detected effectively, and the ALK fusion partner of the case is unknown. To further explore the incidence of ALK fusion, the mutation data of 276 papillary RCC patients were downloaded from the cBioportal for Cancer Genomic database (https://www.cbioportal.org/). Of the 276 papillary RCC patients, 2 patients also harbored ALK fusions, with 1 carrying ALK-EML4, and another carrying STRN-ALK. Moreover, the genetic profiles of the six RCC patients with EML4-ALK fusions reported by Sumanta and his colleagues, seven were added to the ALK-RCC cohort of this study (Table 1). By comparing the mutation data among ALK-RCC and RCC without ALK fusion (nALK-RCC), we found that the most common mutations in nALK-RCC (occurrence rate >6%) were not found in ALK-RCC (Figure 2A). Co-existing mutations in ALK-RCC included DNMT3A, TERT, and TP53. Although these mutations could be found in nALK-RCC, they were expressed at a lower frequency (lower than 3%) (Figure 2B). When compared to previously published cases, these results reveal a different genetic profile of ALK-RCC from that of nALK-RCC. 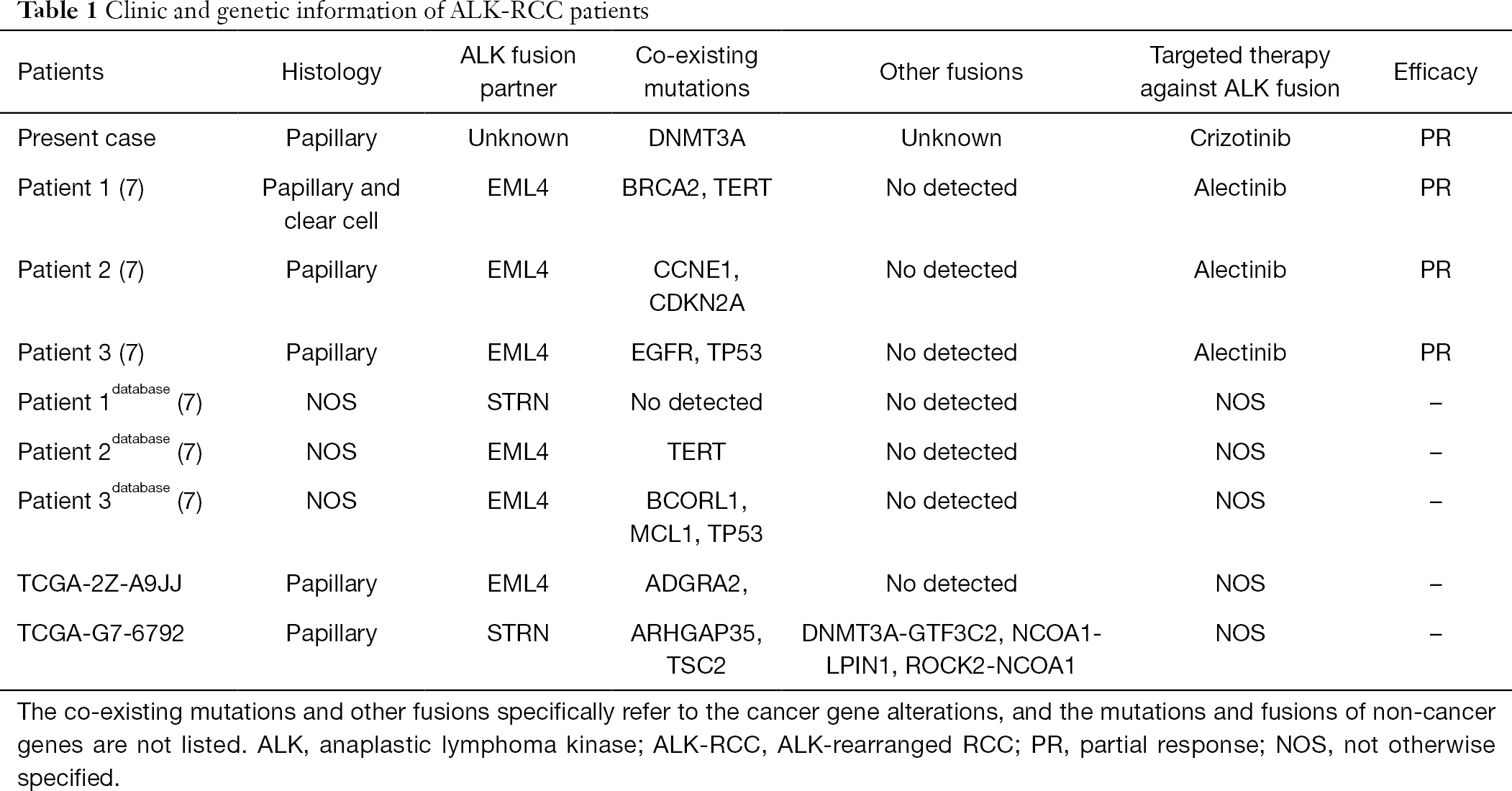 Written consent for all forms of personally identifiable data including biomedical, clinical, and biometric data was obtained from the patient. All procedures performed in studies involving human participants were in accordance with the ethical standards of the institutional and/or national research committee(s) and with the Helsinki Declaration (as revised in 2013).

Targeted therapy is at the forefront of malignant tumor treatment. Identification of appropriate patient population with reliable detective methods is the key to targeted therapies. Patients harboring ALK rearrangement are sensitive to ALK inhibitor, such as crizotinib. In our report, the patient was tested as IHC and was diagnosed with ALK positive. In order to further confirm the ALK status, the patient was diagnosed as ALK rearrangement by combining ALK Ventana-D5F3 IHC assay and FISH analysis. Previous studies have also indicated that combinational assay of ALK FISH and IHC methods are highly recommended to accurately select the patients who could potentially benefit from targeted therapy (18,19). Finally, the patient was treated with crizotinib instead of sunitinib.

ALK rearrangement in RCCs is rare and the detection method for lung metastases complicated by renal cell carcinoma has not been reported. Vetana-D5F3 IHC has high sensitivity (100%) and specificity (98%) (19) and a large number of cases require rapid screening for the identification of those few NSCLC patients who may benefit from ALK inhibitors. Therefore, IHC is relatively fast and inexpensive, and is perfectly adapted for clinical practice by academics and most community hospitals. In contrast, FISH is the current standard method for detecting ALK rearrangement and is the only test correlated with clinical response because of its use in clinical trials. The combination of IHC assay and FISH analysis can perfectly detect ALK status in our report. However, FISH can’t be used to detect ALK fusion partner gene, it is recommended to use other technical platforms for retesting, such as FISH, RT-PCR or NGS.

ALK gene rearrangements encode driver fusion oncoproteins, and ALK tyrosine kinase inhibitors (TKIs) including crizotinib (20), ceritinib (21), alectinib (22), brigatinib (23) and lorlatinib (24) have been developed for patients with ALK-positive NSCLC. The most common adverse drug reactions with ALK tyrosine kinase inhibitors (TKIs), such as alectinib, are stomatitis, interstitial lung disease, weight gain, photosensitivity reaction, and drug-induced liver injury (25). In our report, we present a rare ALK-rearranged RCC case. After recurrence, the patient initially received sunitinib treatment before the identification of the ALK rearrangement. According to National Comprehensive Cancer Net-work guidelines, sunitinib is a standard-of-care first-line therapy for advanced RCC patients. However, many patients have inherent resistance to sunitinib and most of the remaining patients eventually demonstrate tumor growth (26,27). In our case, the toxicity brought by the sunitinib was intolerable, and the patient was treated with crizotinib after treatment failure of sunitinib. The patient experienced a partial tumor response and has tolerated crizotinib well. The efficacy of crizotinib has been investigated in a phase II clinical trial, and results demonstrated that crizotinib achieved objective responses and long-lasting disease control in advanced papillary RCC patients with MET mutations or amplification (28). Recently, alectinib was also demonstrated to be effective in treating ALK-RCC (29). Several clinical trials have revealed that alectinib has superior efficacy and lower toxicity in NSCLC when compared with crizotinib (14,30). However, from the perspective of molecular alterations in RCC, ALK alternations are rare, while MET alterations are common occurrence in RCC (31), and so crizotinib is a more potent therapeutic option in RCC with ALK or MET alterations.

A better understanding of the incremental benefit of ALK tyrosine kinase inhibitors (TKIs) in ALK-RCC patient is needed. We performed whole exome sequencing (WES) on the patient to study her genomic features and compared her mutation data with that of nALK-RCC. The most frequent mutations in nALK-RCC were not found in ALK-RCC. This may indicate that ALK fusions were mutually exclusive with these mutations in RCC. In NSCLC, ALK fusion have been reported to be concurrent with TP53, CDKN2A/B, SETD2, and EGFR mutations (from high frequency to low frequency) (32). Among these, CDKN2A, TP53, and EGFR mutations were also reported to co-exist with ALK fusions in RCC patients (29). However, the concurrent gene alterations, such as SETD2, a histone modifier with tumor suppressor functionality, may be underestimated due to the small number of ALK-RCC patients. While SETD2 was not found in ALK-RCC, we noted that DNMT3A, a DNA methyltransferase, is co-mutated with ALK fusion in two RCC patients, with one being a point-mutation and the other being a fusion mutation. Additionally, TERT promoter was also found to be concurrently mutated with EML4-ALK fusion in two RCC patients (29), and may have clinical implications in cancer via telomerase activation (33). These co-occurring genetic alterations may cooperate with the oncogenic function of ALK in promoting RCC progression and therapy resistance in both the targeted therapy-naïve and the acquired resistance setting. However, ALK-RCC genetic differences need further follow-up and large data sample research.

Our report demonstrated the efficacy of crizotinib in an RCC patient with ALK rearrangement. However, due to the low frequency of ALK alterations in RCC, conducting trails with large amount of cases to investigate the efficacy of crizotinib may be unfeasible. We further discovered a possible differential genomic feature of ALK-RCC, but more genetic data from RCC cases with ALK fusions are needed for further validation.

The authors would like to thank Shanghai Tongshu Biotechnology Co., Ltd. for technical support.

Reporting Checklist: The authors have completed the CARE reporting checklist. Available at http://dx.doi.org/10.21037/tau-20-1343

Conflicts of Interest: All authors have completed the ICMJE uniform disclosure form (available at http://dx.doi.org/10.21037/tau-20-1343). The authors have no conflicts of interest to declare.

Ethical Statement: The authors are accountable for all aspects of the work in ensuring that questions related to the accuracy or integrity of any part of the work are appropriately investigated and resolved. Written consent for all forms of personally identifiable data including biomedical, clinical, and biometric data was obtained from the patient. All procedures performed in studies involving human participants were in accordance with the ethical standards of the institutional and/or national research committee(s) and with the Helsinki Declaration (as revised in 2013).