Adding radiotherapy based on chemotherapy can improve cancer-specific survival in N3 penile cancer: a SEER-based study

Penile cancer (PeCa) is relatively rare in most western countries (i.e., USA and Europe) (1), while the incidence can account for 1–2% of malignant diseases in men in Africa, South America or some other parts of the world (2). The histology of 95% penile cancers are squamous cell (3). Generally, more than 80% of cases can be cured if PeCa is diagnosed early. But when lymphatic metastasis occurs, it is a dangerous disease (4). Current research has validated that regional lymph node spread range is a key prognostic indicator in patients with PeCa, and patients have an especially poor long-term survival with pelvic lymph node (PLN) involvement (5). Pandey et al. (6) reported patients with pelvic nodal metastasis (21cases) had a poor prognosis.

As for patients with regional lymph nodes metastasis, the current European Association of Urology (EAU) guidelines recommended the treatment of radical lymphadenectomy (LAD) (4). However, outcomes were not satisfactory, leading to the development of adjuvant treatment including radiotherapy and chemotherapy. Recently, Burt et al. (7) conduct a research using the data from Surveillance, Epidemiology, and End Results (SEER) Program database and frustratedly found that radiotherapy had neither a beneficial nor harmful effect for cancer-specific survival in the multivariable analysis. Besides, Franks et al. (8) reported some side effects after radiotherapy (i.e., skin toxicity, scrotal/penile or lower limb lymphedema and groin telangiectasia/fibrosis). On the contrary, Tang et al. (9) believed adjuvant pelvic radiation is associated with decreased recurrence and improved survival in patients with PeCa with positive PLNs. Due to this argue of effect, radiotherapy cannot be suggested for the treatment of lymph node metastasis in PeCa in the latest EAU Guidelines (4). Additionally, adjuvant chemotherapy after LAD in node-positive patients has been reported in some small studies. In recent years, Sharma et al. (10) concluded chemotherapy is associated with improved overall survival (OS) in patients undergone the treatment of LND {median OS months [inter quartile range (IQR)]: 21.7 [11.8–104] vs. 10.1 [5.6–48.1], P=0.048}. Necchi et al. (11) showed the OS of patients with the stage cN0-2 and N3 could not be improved with neoadjuvant chemotherapy and adjuvant chemotherapy. Controversial effectiveness of chemotherapy and still poor prognosis prompt urologist to find better treatment options. Recently, Yuan et al. (12) reported that adjuvant chemoradiation therapy can improve locoregional control of PeCa. Besides, a retrospective study of Choo et al. (13) was conducted for a total of 23 patients with regional lymph node metastasis and suggested a potential benefit of chemoradiotherapy for patients with extensive regional lymph node metastasis. Therefore, more and more urologists pay attention to the combination of radiotherapy and chemotherapy.

In this study, we used data from the American SEER program to investigate whether adding radiotherapy based on chemotherapy can effectively improve the prognosis of patients, especially for advanced PeCa. We supposed that adding radiotherapy based on chemotherapy can improve cancer-specific survival in N3 PeCa. We present the following article in accordance with the strengthening the reporting of observational studies in Epidemiology (STROBE) reporting checklist (available at http://dx.doi.org/10.21037/tau-20-1044).

Our data were obtained from the National Cancer Institute’s SEER program through SEER*Stat software V.8.3.5, which covers approximately 28% of the U.S. population (https://seer.cancer.gov/, accession numbers 13693-Nov2015 and lh8N79l2). In this study, we selected patients diagnosed with primary PeCa between 2004 and 2015. All patients have the information about age, race, grade, cancer tumor node metastasis (TNM) stage on criteria from the American Joint Committee on Cancer (AJCC) 6th versions, the first course of treatment (i.e., surgery, radiotherapy, chemotherapy or several of them), cause of death and survival months. Our exclusion criteria included (I) with other cancer diagnosis experience; (II) without chemotherapy. The specific selecting process could be seen in Figure 1.

We used descriptive statistics to summarize the patients’ clinical characteristics and continuous variables expressed as mean± standard deviation. Clinicopathologic features were compared between the chemoradiotherapy group and chemotherapy group using Student’s t test and Pearson’s chi-square test. The survival curves were plotted using the Kaplan-Meier method and the log-rank test was conducted. Univariate and multivariate cox regression models were performed in order to determine the hazard ratios (HRs) with 95% confidence intervals x(CIs) for penile cancer-specific survival (PCSS). Subgroup analysis via multivariate Cox models were conducted to discovery the different effect in population with different features. All statistical tests were 2-sided, and the significance level was P<0.05. Data were analyzed using the statistical package R (the R foundation; http://www.r-project.org;version3.4.3).

The study was conducted in accordance with the Declaration of Helsinki (as revised in 2013) and we were granted permission from the National Cancer Institute USA to access the SEER dataset for research purposes only (reference number: 21111-Nov2018). All the data from the SEER database were de-identified, and the extracted data did not require informed consent.

Two hundred and ninety-four patients were included in the analysis. All patients’ median age was 59.3±11.7 years. The demographics and tumor characteristics are presented in Table 1. Surgery and race information was missing in 3 (1.01%) patients and our analysis showed that these data met the “missing at random” hypothesis. There were no significant differences in age at diagnosis, race, grade, TNM stage variables between the chemoradiotherapy group and chemotherapy group (P>0.05), except that surgery situation were significantly different (P=0.026). 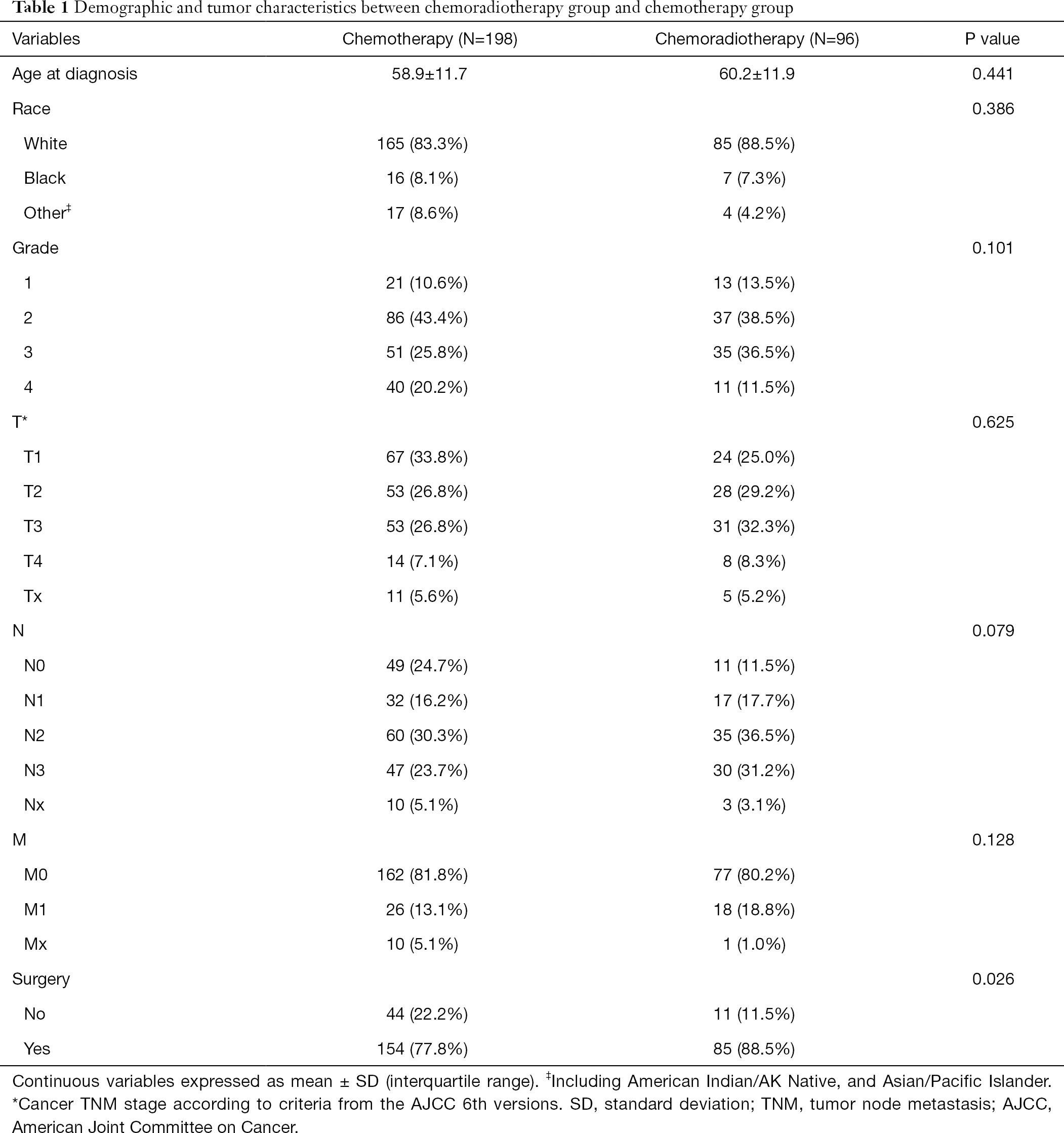 Association of combined chemoradiotherapy and PCSS 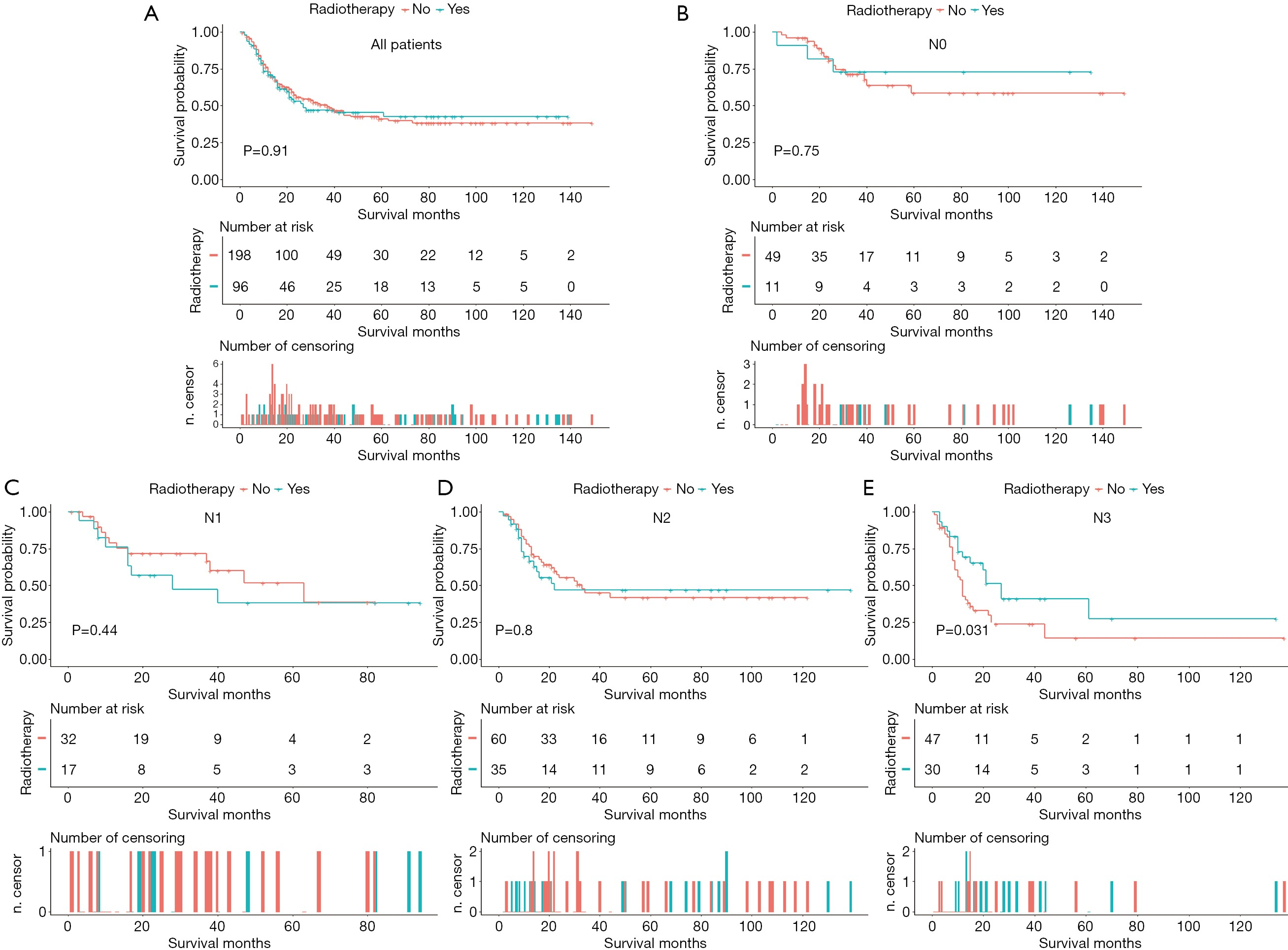 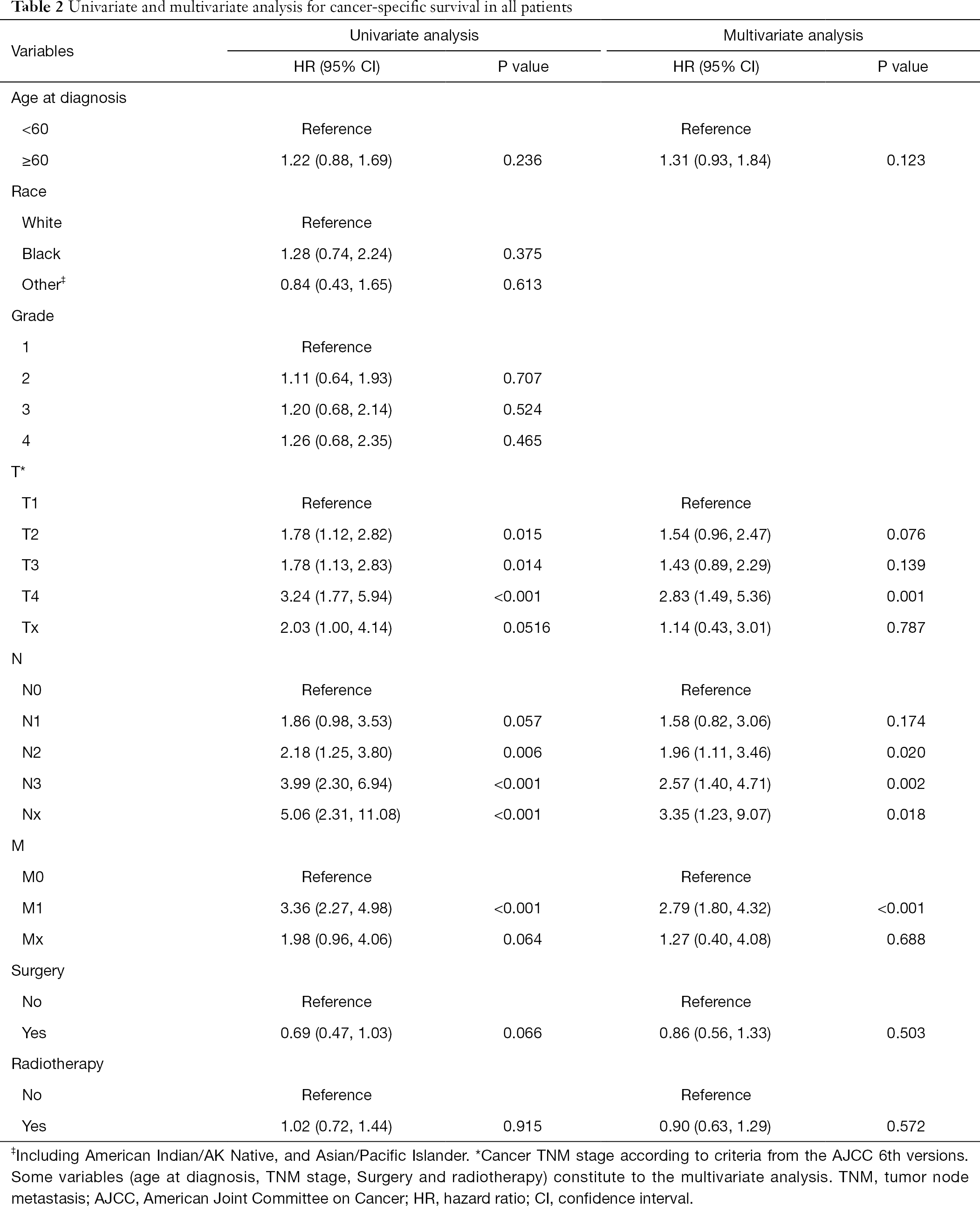 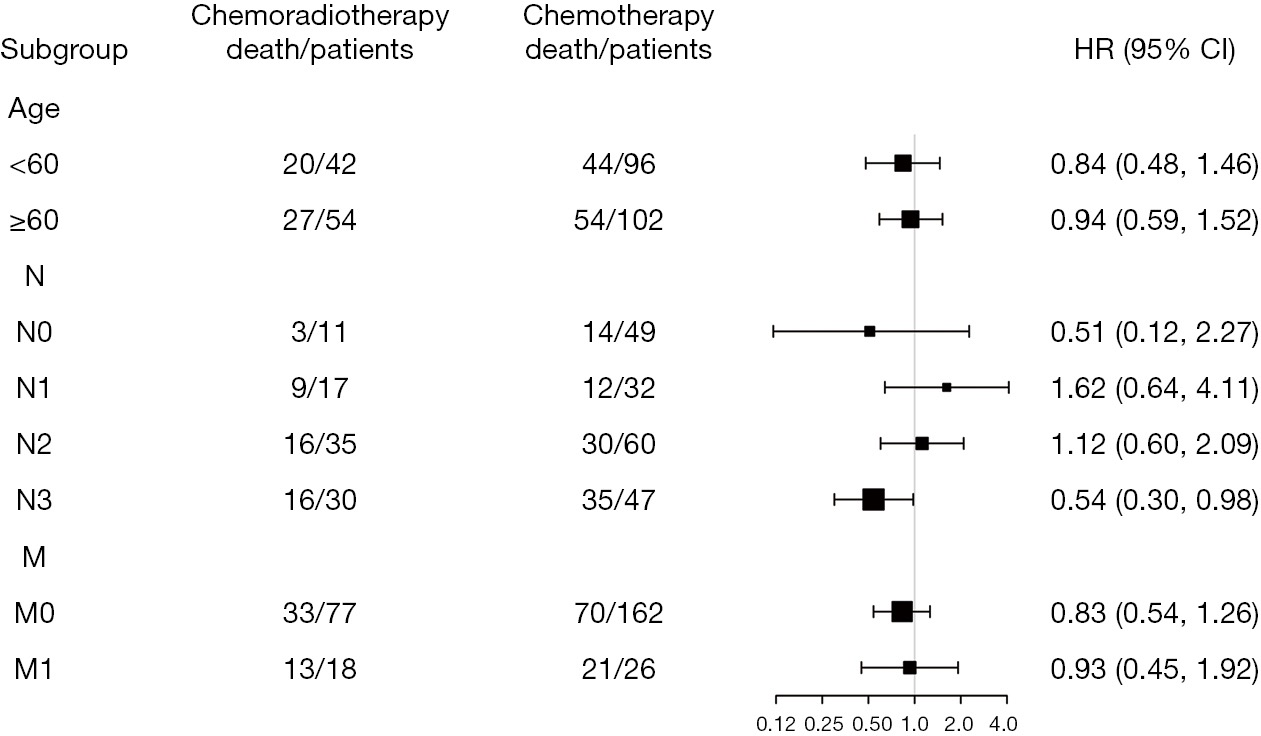 Regional lymph node spread range is a key indicator of prognosis. Widely metastatic lymph nodes often mean poor prognosis (5,14). Despite current treatment strategies, patients with advanced PeCa after inguinal lymphadenectomy (ILND) still have a poor prognosis. The discovery of chemotherapy was a significant technique to improve the prognosis of kinds of cancer patients nowadays, and some studies had demonstrated that chemotherapy could both decrease recurrence and improve the survival in patients diagnosed as primary PeCa with positive pelvic lymph nodes (PPLNs) (10).

However, even under the treatment of surgery and chemotherapy, the 5-year survival rate of advanced patients is still not satisfactory. Therefore, it is necessary to explore a better treatment program.

Recently, there are successive articles discussing the treatment of combined chemoradiotherapy. In a study presented at the 2019 EAU annual meeting, Ager et al. (15) retrospectively assessed 151 patients with an N3 stage. Those who completed radiotherapy (with or without chemo sensitisation, n=124) had a higher 5-year PCSS (47% vs. 31%) compared to patients who did not (n=27). This conclusion is consistent with the findings of other two studies (12,13). On the contrary, there were some literatures which suspected the effective role of radiotherapy or chemoradiotherapy. Ottenhof et al. (16) reported disappointing 1-year (50%) and 2-year (26%) OS with low toxicity in a cohort of 34 patients with T3/4 N2/3 stages who underwent chemoradiotherapy. Chipollini et al. (17) evaluated the PCSS, OS and progression-free survival (PFS) of a cohort with 330 patients with positives lymph nodes (N1-3) who either had lymph node dissection alone or underwent systemic treatment (chemotherapy with or without radiation or radiation alone based on time of ILND). However, none of the systemic treatment options significantly improved PCSS, OS and PFS. Besides, Johnstone et al. (18), who also retrospectively analyzed patients (n=93) with an N3 stage, found improved OS [postoperative chemotherapy (P=0.038); inguinopelvic radiotherapy (P=0.037)] and relapse-free survival [groin (P=0.016) or inguinopelvic radiotherapy (P=0.006)] in patients without extranodal extension (ENE); however, no beneficial effect of chemotherapy or radiotherapy was observed in those with ENE. At present, a recent systematic review (19) by the EAU penile cancer guidelines panel highlighted that there is a lack of good-quality evidence on adjuvant radiotherapy following ILND and therefore, cannot be recommended in EAU guidelines.

In this study, chemoradiotherapy had neither a beneficial nor harmful effect for PCSS while it improved the PCSS in patients with N3 stage. This may be due to the fact that adding radiotherapy based on chemotherapy has not obvious effect on N0-2 patients, but it occupies a certain proportion in the total patients, which obscures the beneficial effects of chemoradiotherapy for N3 patients. N3 patients whose multiple or bilateral superficial lymph nodes have been attacked have a higher tumor burden and possibly higher risk of recurrence and metastasis than those of patients with N0-2 stage. Adding radiotherapy based on chemotherapy may be more effective and thorough for killing lymphatic metastatic tumor cells. In addition, the National Comprehensive Cancer Network (NCCN) guidelines (20) suggest to using adjuvant chemoradiotherapy in pN2–3 patients from the successful experience of treating other squamous cell carcinoma’s (21,22). Therefore, further study is needed to validate the benefit of chemoradiotherapy. Besides, radiotherapy can not only kill tumor cells, but also cause damage to patients with a series of complications. According to the current literature, the most common side effect is skin acute skin toxicity, which occurring in 83% of the patients received radiotherapy (8). Besides, some studies also reported the complication of lymphoedema and groin telangiectasia/fibrosis (8,23). Until now, no serious or fatal complications have been reported, which may reflect the safety of chemoradiotherapy. More researches focusing on toxicity should be carried out. In this study, the benefit was not found in N0-3 patients, which may suggest that the unnecessary recommendation of adding radiotherapy in PeCa groups of mild lymphatic metastasis due to the unclear efficacy and potential complications. More studies should be carried out to confirm this finding.

There are some limitations in our study. Firstly, our study lacked specific information on chemotherapy, radiotherapy and surgery (e.g., chemotherapy regimens, radiotherapy strategy, lymph node dissection range…). What we got is that most chemotherapy regimens were based on Cisolatin and Radiotherapy was provided at the discretion of the attention radiation oncologist. Therefore, it is necessary for us to research of our own patients in order to get more powerful evidence. Secondly, due to the rarity of penile cancer, our study sample size is limited, which still needs more evidences to prove effectiveness of combined chemoradiotherapy. Thirdly, the rate of surgery in chemoradiotherapy group was higher than chemotherapy group; it may be due to the more serious condition of patients in chemoradiotherapy group. Maybe this different distribution would affect the result. However, in this study, surgery did not improve the PCSS through the results of multivariate analysis in our collected patients. Fourthly, it was difficult to evaluate the complications and the specific morbidity, because it was conducted using the SEER database which lacking related information.

In summary, in this population-based retrospective study, we investigated whether adding radiotherapy based on chemotherapy can effectively improve the prognosis of patients. Our study demonstrated a significant correlation of chemoradiotherapy with improved cancer-specific survival of penile cancer (PeCa) in N3 patients. However, the effectiveness of treatment of chemoradiotherapy needs to be proven in many ways and prospective international multicenter studies are necessary in order to improve prognosis for patients with advanced penile cancer.

We thank the anonymous editors and reviewers of “Translational Andrology and Urology” for the insightful comments and suggestions.

Reporting Checklist: The authors have completed the STROBE reporting checklist. Available at http://dx.doi.org/10.21037/tau-20-1044

Conflicts of Interest: Both authors have completed the ICMJE uniform disclosure form (available at http://dx.doi.org/10.21037/tau-20-1044). The authors have no conflicts of interest to declare.

Ethical Statement: The authors are accountable for all aspects of the work in ensuring that questions related to the accuracy or integrity of any part of the work are appropriately investigated and resolved. The study was conducted in accordance with the Declaration of Helsinki (as revised in 2013) and we were granted permission from the National Cancer Institute USA to access the SEER dataset for research purposes only (reference number: 21111-Nov2018). All the data from the SEER database were de-identified, and the extracted data did not require informed consent.