Prostate cancer (PCa) is currently ranked as the second cancer affecting the health of men worldwide (1). For most PCa patients, although the growth of the tumor begins to significantly slow down or even stagnate after undergoing physical or chemical castration treatment, castration resistance and metastasis or recurrence will still inevitably occur, resulting in high mortality of patients (2-5). Although prostate specific antigen (PSA) has been put into clinical use as a biomarker for the diagnosis and prognosis of PCa, it still has some limitations, such as differences in various races or ethnic groups and low sensitivity. Thus, it is important to find new biomarkers for diagnosing the occurrence, development and recurrence of PCa.

Small nucleolar RNA host gene (SNHG) family is a group of lncRNAs which acts as novel oncogenes in various cancers (6-10). A recent study demonstrated that SNHG1 can be regulated by miRNAs and promote the immune escape of breast cancer (11,12). SNHG6 can promote the progression of colon and rectal adenocarcinoma and tumorigenesis of glioma via modulating the expression levels of miR-101-3p (13,14). Moreover, SNHG8 is a potential biomarker and therapeutic target for hepatocellular carcinoma and non-small cell lung cancer (15,16). Although a few studies have shown that SNHG9 can play a key role in cancer development (17-20), no literature has explored the correlation between SNHG9 and PCa. Therefore, the present study aimed to clarify the expression of SNHG9 in PCa tissues, and its potential therapeutic and prognostic values.

In this research, we used the PCa RNA-seq data in The Cancer Genome Atlas (TCGA) database to compare the difference of SNHG9 expression between tumor tissues and normal samples, and investigate the correlation between SNHG9 expression levels and clinical pathological features of PCa. Next, we evaluated the prognostic value of SNHG9 in PCa. In addition, gene-set enrichment analysis (GSEA) was performed on the high and low expression groups of SNHG9 to reveal its possible functions. Finally, by analyzing the correlation between SNHG9 expression and immune infiltration, we comprehensively explored and discussed the potential mechanism by which SNHG9 modulates the occurrence and development of PCa. We present the following article in accordance with the MDAR reporting checklist (available at: http://dx.doi.org/10.21037/tau-20-1134).

We used TCGA database (https://genome-cancer.ucsc.edu/) to collect RNA-seq data and clinical information from 495 cases of PCa projects, including 52 cases with matched adjacent tissues. The downloaded data format was level 3 HTSeq-fragments per kilobase per million (FPKM) and then was converted into transcripts per million (TPM) format for subsequent analysis. We also download TPM format RNA-seq data in TCGA and Genotype-Tissue Expression (GTEx) database that uniformly processed by Toil process from UCSC Xena (https://xenabrowser.net/datapages/) (21). All procedures performed in this study were in accordance with the Declaration of Helsinki (as revised in 2013).

The GSEA and MSigDB v6.2 (Molecular Signatures Database) were downloaded from the GSEA website (http://software.broadinstitute.org/gsea/index.jsp). The R package clusterProfiler (version 3.6.0) was used to perform GSEA between high- and low-SNHG9 groups (22,23). According to the default statistical method, the process was repeated 1,000 times for each analysis and selected c5.all.v7.0.symbols.gmt (Gene ontology) in MSigDB Collections as the reference gene collection, false discovery rate (FDR) q-value <0.25 and adjusted P adjust <0.05 are considered to be significantly enriched.

The immune infiltration analysis of PCa was performed by single sample GSEA (ssGSEA) method from R package GSVA (version 3.6) (http://www.bioconductor.org/packages/release/bioc/html/GSVA.html), and we quantified the infiltration levels of 24 immune cell types from gene expression profile in the literature (24). In order to discover the correlation between SNHG9 and the infiltration levels of 24 immune cells, P values were determined by the Spearman and Wilcoxon rank sum test.

SNHG9 expression is correlated with poor clinicopathological features of PCa 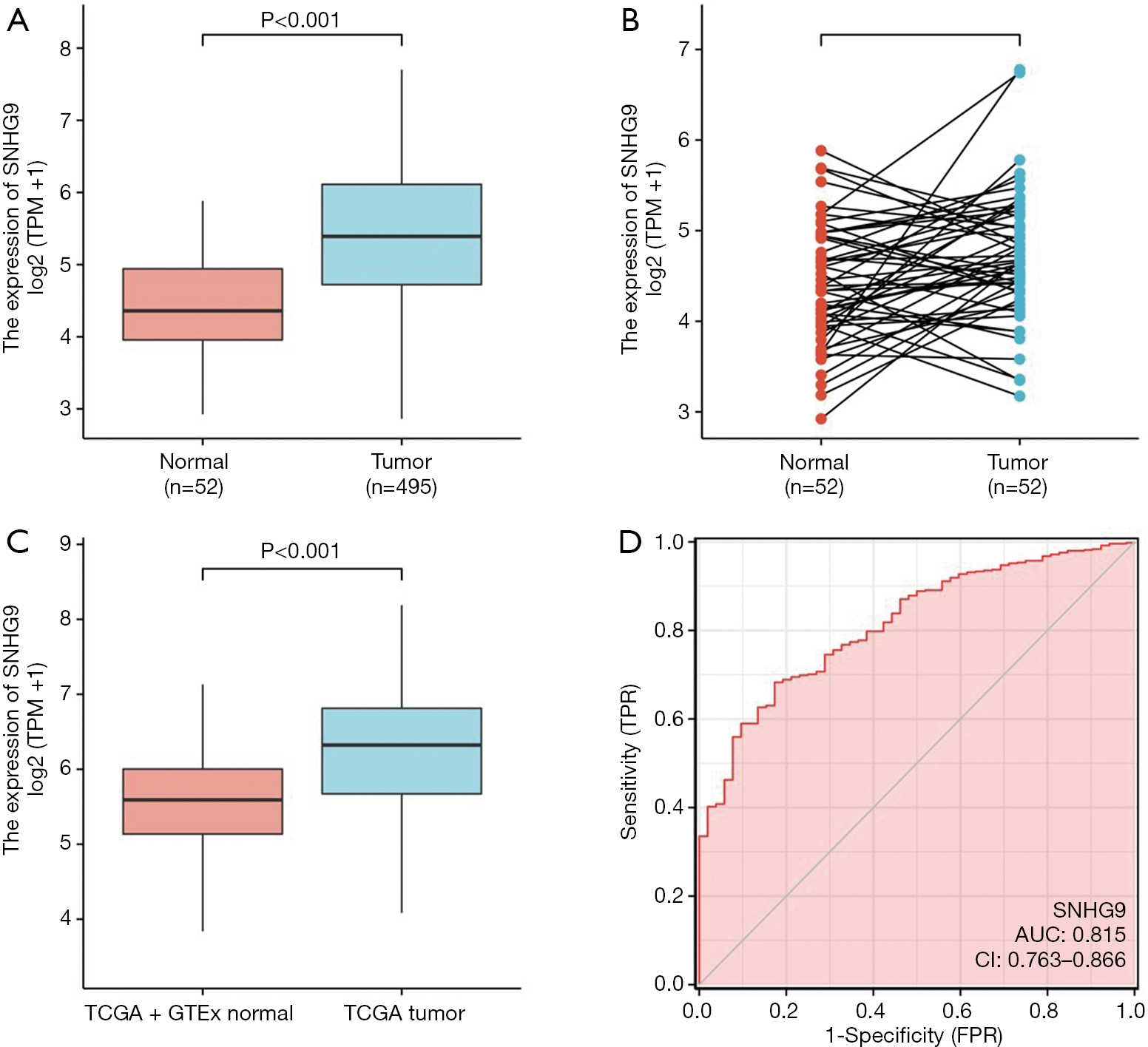 The characteristics of patients were shown in Table 1, in which 495 primary PCa with both clinical and gene expression data were collected from TCGA database. According to the mean value of relative SNHG9 expression, the patients with PCa were divided into high (n=248) and low (n=247) expression groups. The association between the expression level of SNHG9 and the clinicopathological characteristics of PCa patients was evaluated. Chi-square test or Fisher’s exact test revealed that SNHG9 expression was associated with N stage (P<0.001), Gleason score (P=0.002), primary therapy outcome (P=0.001) and residual tumor (P<0.001). Using Student’s t-test or Wilcoxon signed rank sum test, we found that SNHG9 expression was associated with PSA level (P=0.007). 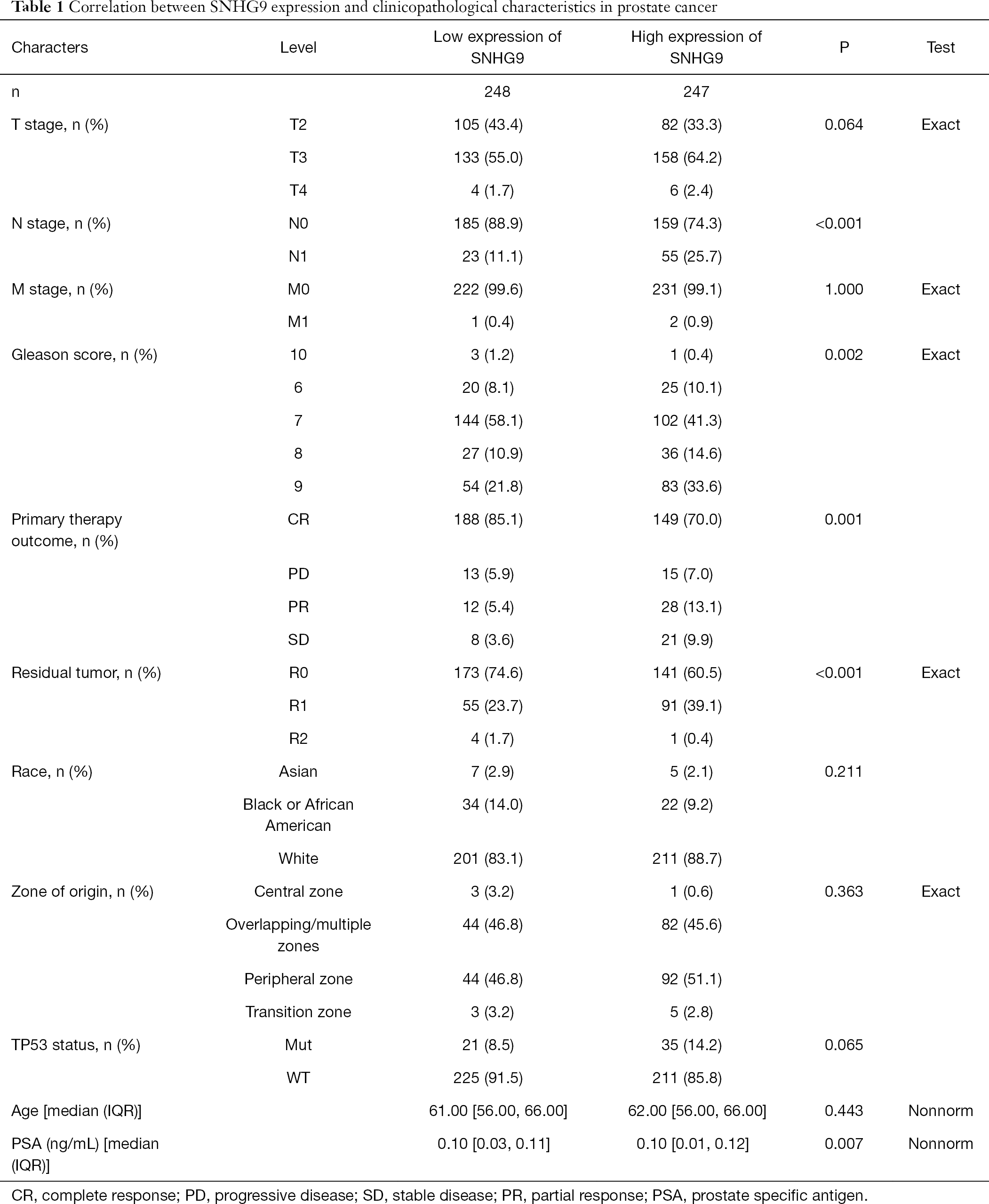 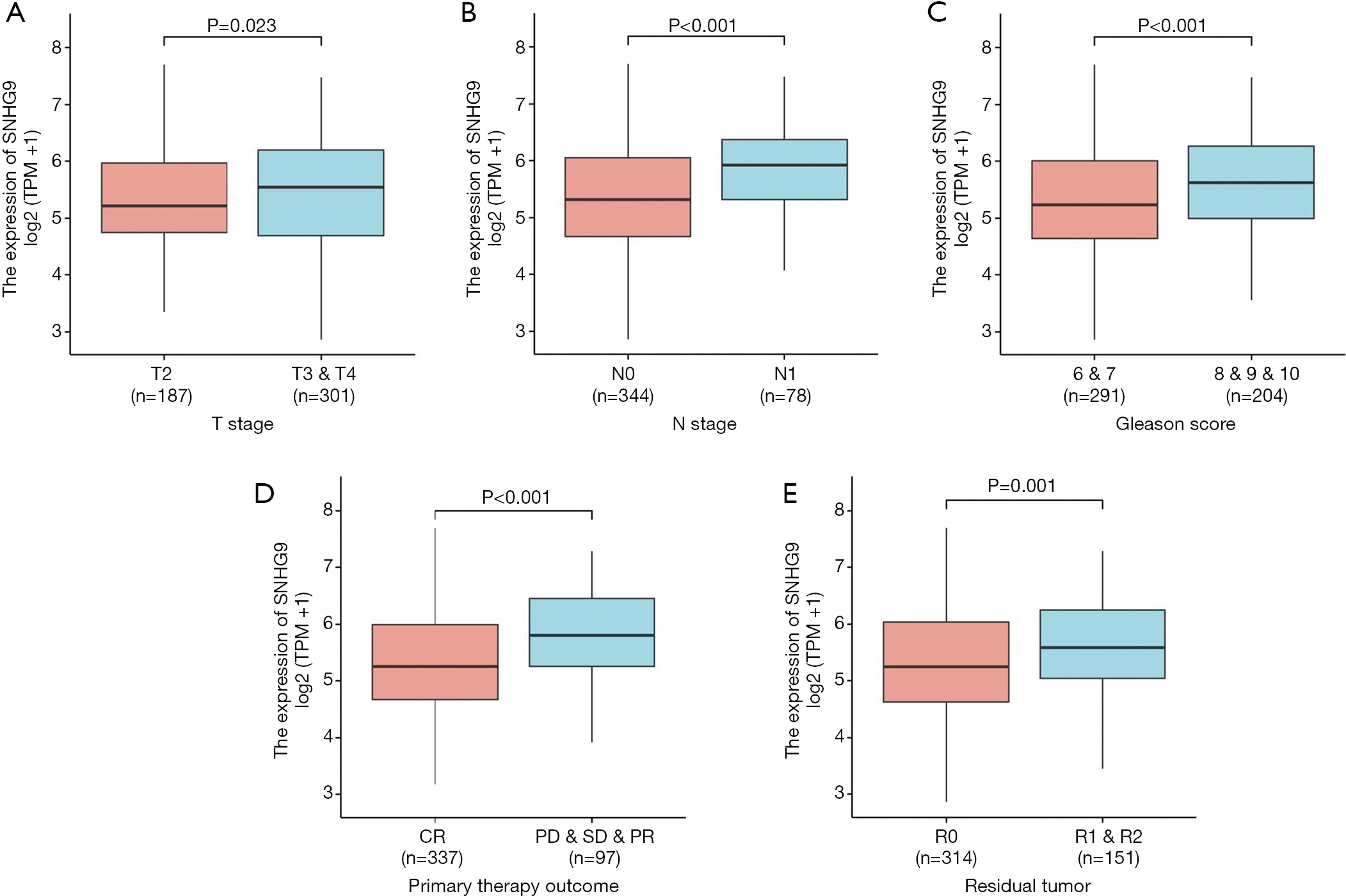 SNHG9 expression is correlated with poor prognosis of patients with PCa

The association between SNHG9 expression and PFS of patients with PCa was evaluated by Kaplan-Meier analysis, which indicated that expression of SNHG9 is positively correlated with poor PFS of PCa patients (P=0.002, Figure 3A). In addition, to expand our observation to a pan-cancer level, expression of SNHG9 and patient survival was further analyzed in multiple cancer types other than PCa. As shown in Figure S2, significant association between SNHG9 expression and poor PFS was also observed in patients diagnosis of bladder carcinoma (BLCA), Cervical Squamous Cell Carcinoma (CESC), Kidney Renal Clear Cell Carcinoma (KIRC), Low Grade Glioma (LGG), Pancreatic adenocarcinoma (PAAD) and Uveal Melanoma (UVM). 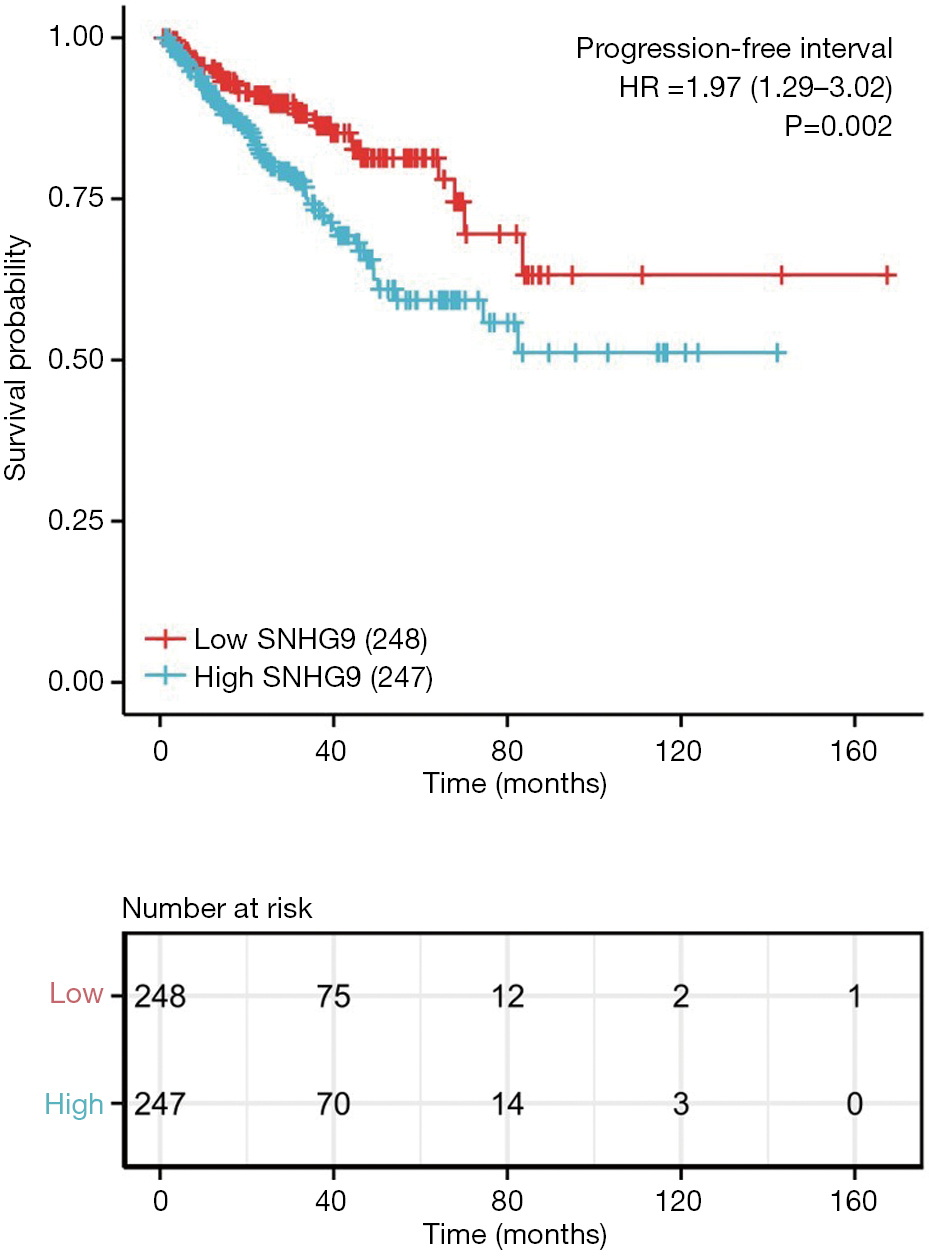 Figure 3 SNHG9 expression and prognosis in patients with PCa. Kaplan-Meier curve was drawn using the R package survminer to evaluate the prognostic value of SNHG9 in PFS of PCa patients. SNHG9 expression value was divided into high and low expression group according to median value.

Cox univariate and multivariate analysis of prognostic factors in PCa 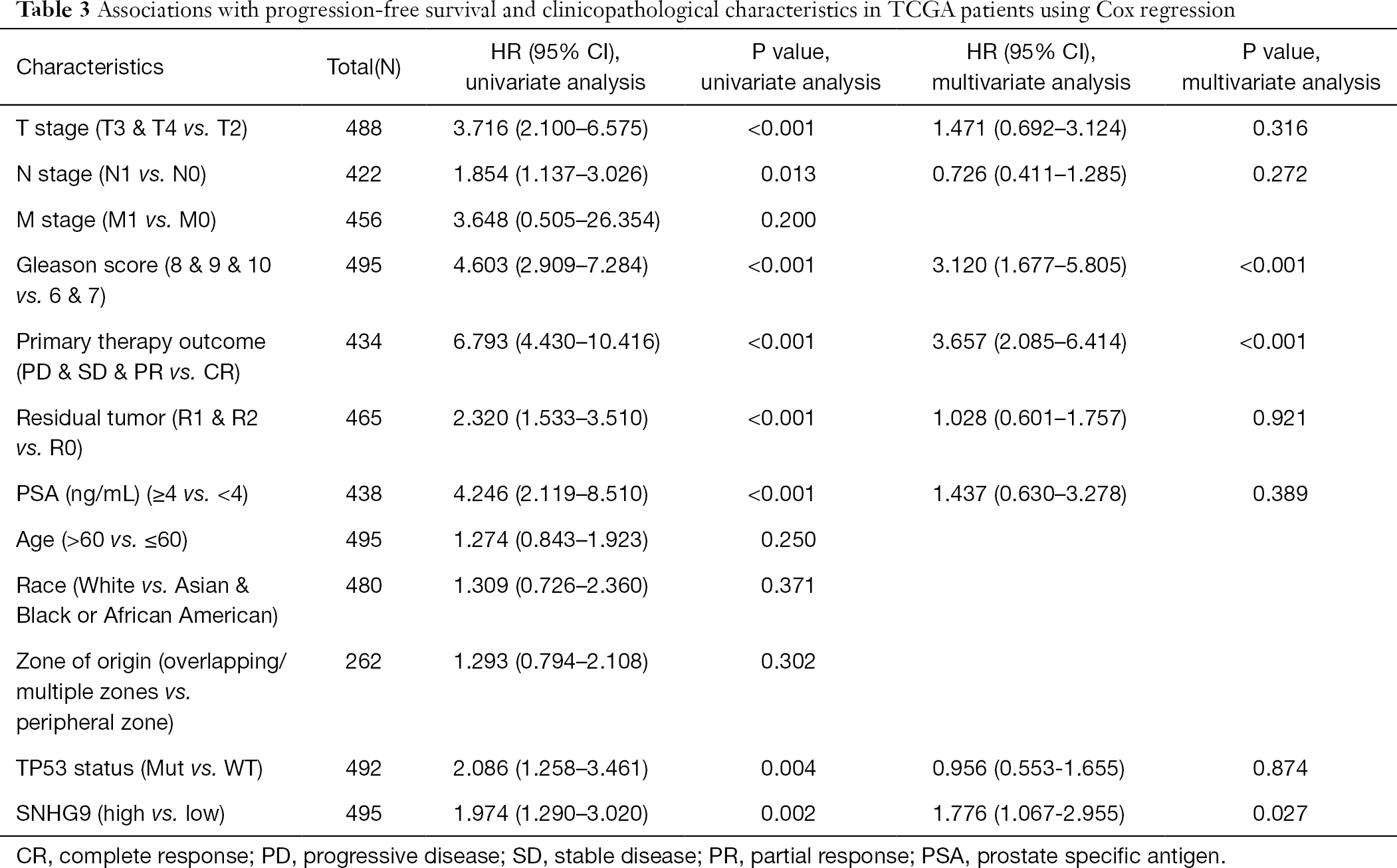 SNHG9-related signaling pathways based on GSEA

GSEA was used to identify SNHG9-related signaling pathways. GSEA revealed significant differences (Padj <0.05, FDR <0.25) in enrichment of MSigDB Collection (c5.all.v7.0.symbols.gmt). There were 3,461 data sets which showed significantly differential enrichment in SNHG9 high expression phenotype, and we selected the top 9 data sets with high value of normalized enrichment score (NES), with most of which were related to the function of ribosome (Table 4, Figure 4). 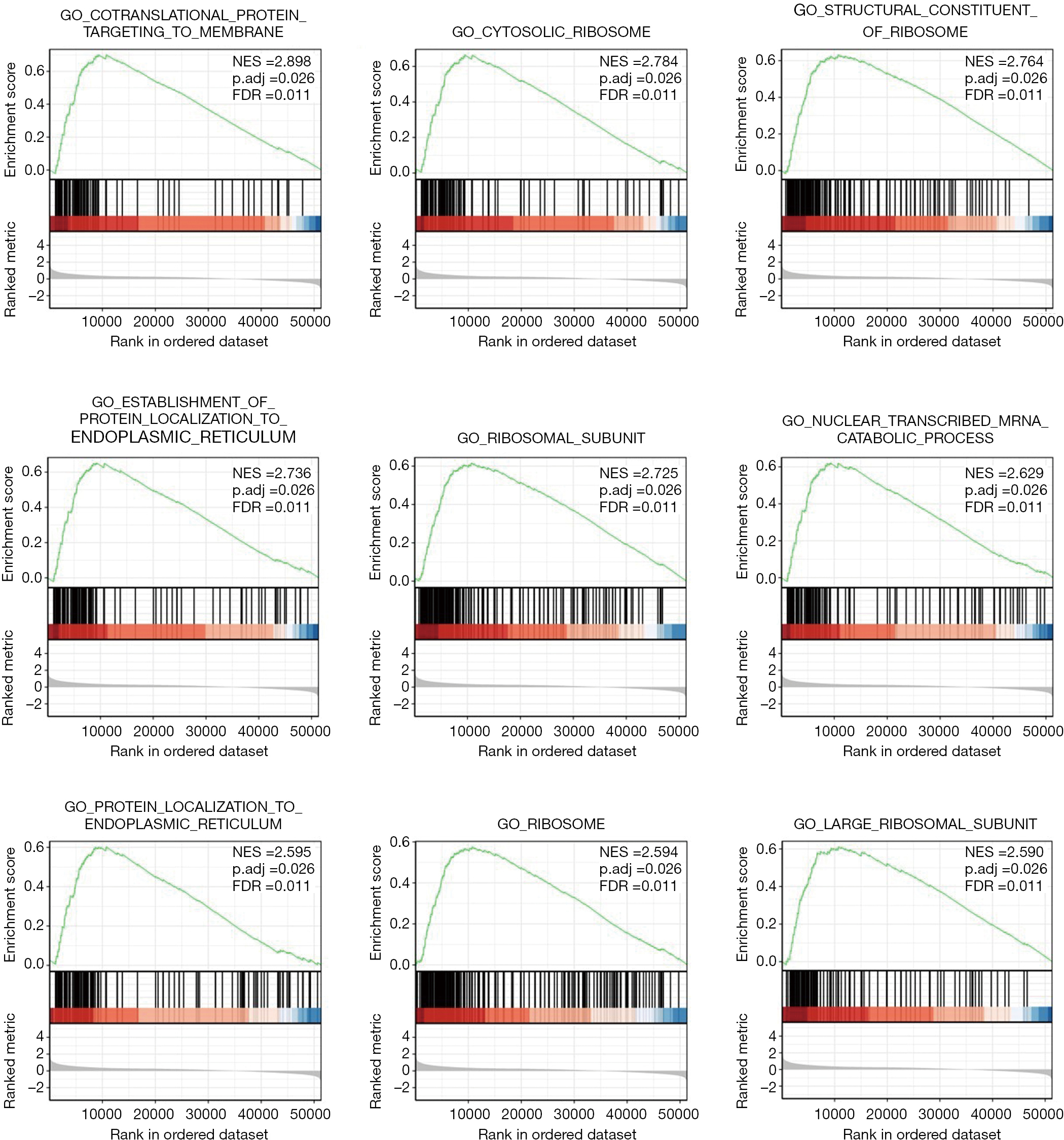 The correlation between SNHG9 expression and immune infiltration 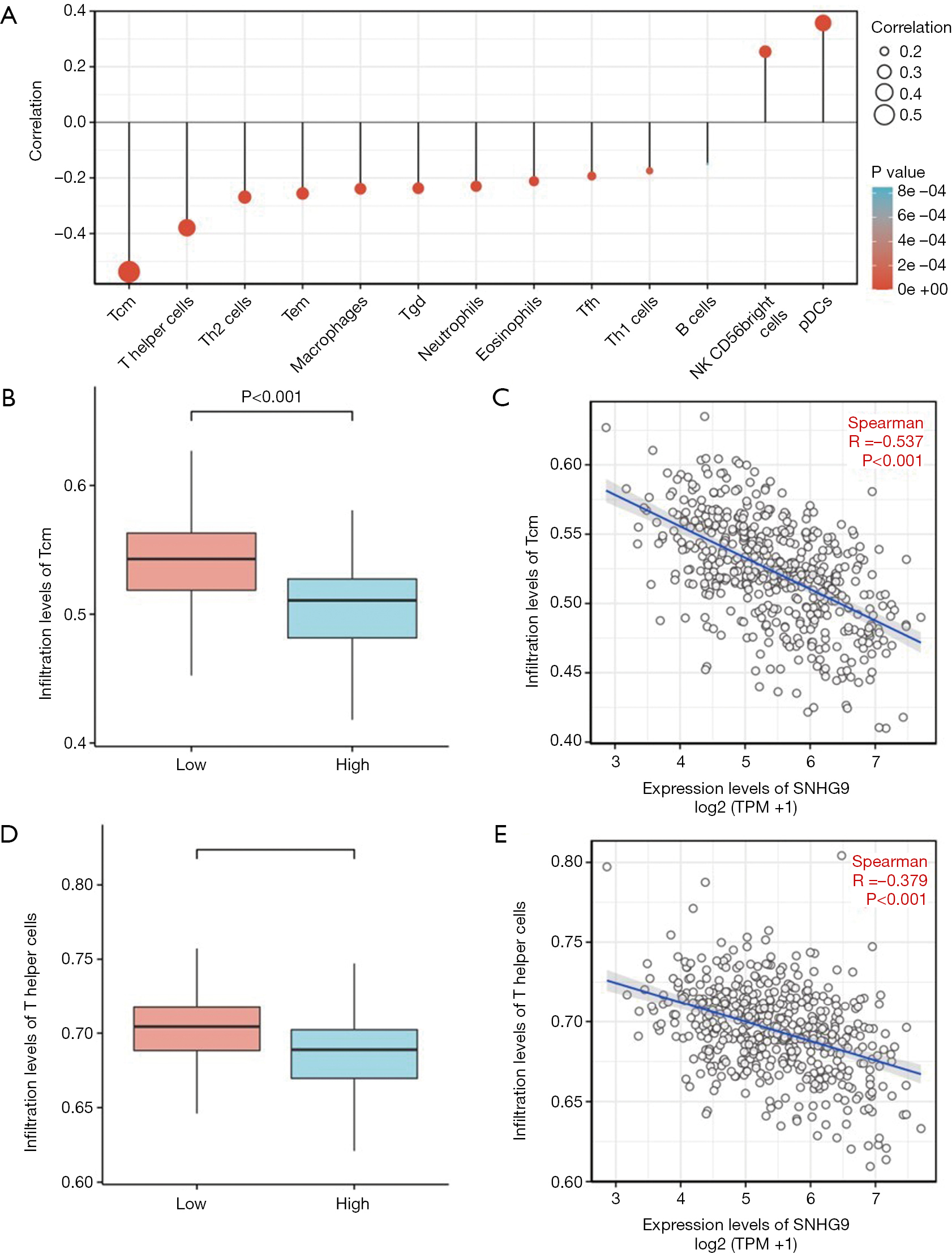 In this study, the expression of LncRNA SNHG9 in PCa and its correlation with PCa diagnosis and prognosis were explored. Dysregulation of SNHG9 has been reported in several cancer types, which plays an essential role during cancer initiation and progression. For instance, a recent study demonstrated that SNHG9 expression was significantly altered in the tissues and serum of pancreatic cancer patients, and its expression was significantly correlated with the TNM stages. In addition, silencing of SNHG9 promoted pancreatic cell proliferation (20). In addition, SNHG9 has been reported to promote aerobic glycolysis and glioblastoma cell proliferation, and this effect might be exerted via a miR-199a-5p/Wnt2-dependent pathway (19). Knockdown of SNHG9 in lung cancer cells reduced the cell growth, proliferation and invasion both in vitro and in vivo (18). Another study revealed that SNHG9 directly binds to TRADD, activates the NF-κB signaling, thus suppresses inflammation and apoptosis, eventually fulfills its protective effect on endothelial function (17). In contrast, down-regulation of SNHG9 was observed in non-small cell lung cancer. The authors further revealed that SNHG9 could downregulate miR-21 by increasing the methylation level of this oncogenic miRNA, and thus suppress cancer cell proliferation (25). All these studies suggest that SNHG9 may play different roles in various cancer types. The present study demonstrated the elevated level of SNHG9 in PCa tissues, which is associated with poor patient outcomes. Similarly, high expression of SNHG9 was also inversely associated with overall survival (OS) of lung cancer patients (18). In addition to PCa, ROC analysis and survival analysis showed that SNHG9 could act as a prognostic indictor of pancreatic cancer as well (20).

A highlight of this work is to predict the potential mechanisms by which SNHG9 regulates the development of PCa. Through GSEA, SNHG9 was found to be involved in targeting to membrane, locating to endoplasmic reticulum and affecting the ribosome function, indicating that SNHG9 may play a role in the maintenance of cell metabolism and protein synthesis. Another important aspect of this study is to investigate the relationship between SNHG9 expression and diverse immune infiltration levels in PCa. Our results revealed a moderate relationship between SNHG9 expression and infiltration level of Tcm, T helper cells, pDCs and NK CD56bright cells in PCa. These correlations could be indicative of a potential mechanism by which SNHG9 inhibits the function of Tcm and T helper cells, subsequently promotes the function of pDCs and NK CD56 bright cells, and thus exerts its inhibitory effect on PCa.

To our best of knowledge, it is the first work to explore the relationship between SNHG9 and PCa, despite the existence of some limitations. First, the current study was performed primarily based on bioinformatic analyses, which could be further strengthened by experimental research. Second, the number of healthy subjects used as controls is largely different from that of cancer patients. Last but not most, retrospective studies still have their own limits, especially nonuniform intervening measures, and lacking of some information. As a result, follow-up studies are needed to further validate our findings.

Collectively, we observed increased SNHG9 in PCa, which was also related to poor PFS. Moreover, SNHG9 might participate in the development of PCa via affecting the function of ribosome and immune infiltrating cells. The current study partially unveiled the roles of SNHG9 in PCa and provided a potential biomarker for the diagnosis and prognosis of PCa.

Reporting Checklist: The authors have completed the MDAR reporting checklist. Available at http://dx.doi.org/10.21037/tau-20-1134

Conflicts of Interest: All authors have completed the ICMJE uniform disclosure form (available at http://dx.doi.org/10.21037/tau-20-1134). The authors have no conflicts of interest to declare.

Ethical Statement: The authors are accountable for all aspects of the work in ensuring that questions related to the accuracy or integrity of any part of the work are appropriately investigated and resolved. All procedures performed in this study were in accordance with the Declaration of Helsinki (as revised in 2013).