The gold standard for the management of prostate cancer (PC) is hormonal therapy, such as androgen deprivation therapy (ADT), along with radical prostatectomy and radiotherapy. Especially in Japan, ADT is widely used as a primary therapy for patients with advanced PC, as a neoadjuvant/adjuvant therapy combined with various radiotherapies (1). On the other hand, numerous adverse effects such as erectile dysfunction, low libido, menopausal symptoms, and metabolic syndrome occur frequently with ADT (2). Among these adverse events, hot flashes are the most common and result in decreased patient quality of life (QOL) (3). Although some drugs have been reported to be effective for hot flashes (4,5), there are currently no established treatments.

We present the following article in accordance with the STROBE reporting checklist (available at http://dx.doi.org/10.21037/tau-20-901).

This study was approved by the Ethical Committee of the Kanazawa University Graduate School of Medical Science (No. 2017-214) and was conducted in accordance with the Declaration of Helsinki (as revised in 2013). All patients enrolled completed the informed consent form. Tsumura keishibukuryogan extract granules for ethical use (TJ-25; Tsumura & Co., Tokyo, Japan) were used for this study. This prospective single-arm cross-sectional study evaluated the efficacy and safety of TJ-25 for hot flashes among PC patients receiving ADT (UMIN 000031606). The primary endpoint was the efficacy of TJ-25 in improving the strength, frequency, and duration of hot flashes. Included in the secondary endpoints were its efficacy in ameliorating menopausal symptoms and its safety, including changes in total testosterone (TT) and prostate specific antigen (PSA) levels.

Factors determining eligibility in PC patients receiving ADT at Kanazawa University Hospital who had hot flashes included: desire for treatment, performance status of 0–2, a prognosis of one year or more, and the ability to take the drug orally. We excluded patients with severe mental illness; serious liver or renal dysfunction (>3-fold the upper limit of normal AST and ALT values and >2-fold creatinine value); any current use of other herbal medicine and/or selective serotonin reuptake inhibitors and/or serotonin-noradrenalin reuptake inhibitors; previous use of TJ-25 within the 2 weeks prior; a history of allergies to any herbal medicines; castration-resistant PC; positive for Human Immunodeficiency Virus, Hepatitis B Virus, or Hepatitis C Virus; and others, including patients who were judged by the investigator as ineligible. Finally, 30 patients were enrolled in the present study between April 2018 and October 2018.

Eligible patients were administrated TJ-25 at a dose of 2.5 g three times daily for 12 weeks. Medical interviews, blood tests, and checks for any adverse effects were performed 4, 8, and 12 weeks after treatment for all participants. During the trial, all patients were asked to keep a daily describing their hot flashes. The diary included information regarding the strength, frequency, and mean duration of hot flashes. The hot flash strength was assessed by the visual analog scale (VAS), and duration was described in three categories: <3, ≥3 min and <5, or ≥5 min. The diary was collected by the attending doctors at each visit. In addition, a questionnaire evaluating the aging male symptoms (AMS) scale was administered to evaluate menopausal symptoms at the baseline, 4-, 8-, 12-week visits. Blood biochemical analyses including liver function (AST, ALT, ALP, γ-GTP, and T-Bil values), renal function (Cr and BUN values), and PSA levels were also performed at every visit. TT levels were measured at the baseline and 12-week visits. Manuals on consent and research procedure were standardized to address potential sources of bias.

All blood samples were collected between 09:00 and 11:00 at each visit. Blood biochemical data, PSA, and TT were measured promptly, using the commercially available routine autoanalyzer in our hospital. The serum PSA levels were measured by EIA with a minimum detectable concentration of 0.008 ng/mL, and TT levels were measured by electrochemiluminescence immunoassay (CobasTM system, Roche Diagnostic, Co., Tokyo, Japan).

This was a prospective observational pilot study. The sample size was calculated based on the number of patients undergoing hormone therapy per year at research facilities and incidence rate of hot flashes, which was set as the number of cases considered to be practicable in daily medical practice within the registration period.

Next, responder analysis was conducted to identify the predictive factors for response to TJ-25 treatment for hot flashes. All patients were divided into two or three groups according to their median age, body weight, BMI, and duration of PC, as well as the presence of radical prostatectomy, radiation, and complications. They were also classified as follows: clinical stage T1/T2 or T3/T4; Gleason score <8, 8, or ≥9; and LH-RH agonist or antagonist. Changes from the baseline to 12-week visits in hot flashes symptoms were compared by unpaired t-test. Missing data items repeatedly measured over time were not complemented.

In all analyses, P<0.05 was considered statistically significant. All statistical analyses were commissioned to I’CROS JAPAN Co., Ltd. (Tokyo, Japan).

A total 30 patients were recruited for the present study, and all met the inclusion criteria and were eligible for this trial. The patients’ characteristics are summarized in Table 1. Their age [mean ± standard deviation (SD)] was 69.5±6.0, and BMI was 24.0±3.7. The duration of PC was 3.1±4.2 years. Eleven (36.7%) and seven (23.3%) patients had received radiotherapy and radical prostatectomy, respectively.

Finally, 25 of 30 participants completed the TJ-25 treatment for 12 weeks (Figure 1). Five patients discontinued treatment due to withdrawal of consents (three cases), adverse effects (one case of sleep disorder), and investigator decisions (one case). 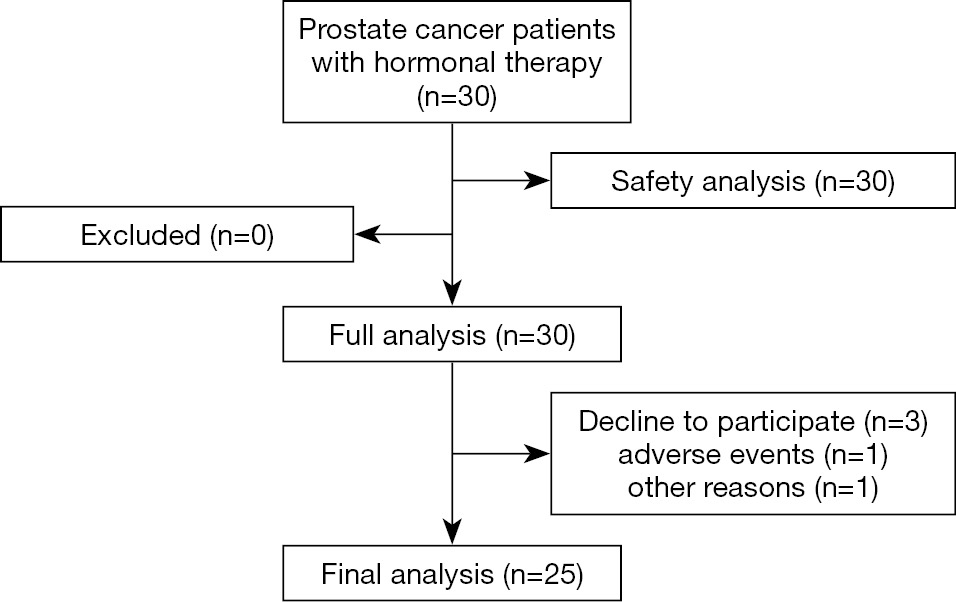 Figure 1 Flow chart of eligible patients selected for this study.

Figure 2 Effects of keishibukuryogan on hot flashes. (A) Strength, (B) frequency, and (C) duration of hot flashes at four times visits. Data are expressed as the mean ± SD. (A,B) and the ratio of patients with duration based on criteria at each visit (C). VAS, visual analog scale. 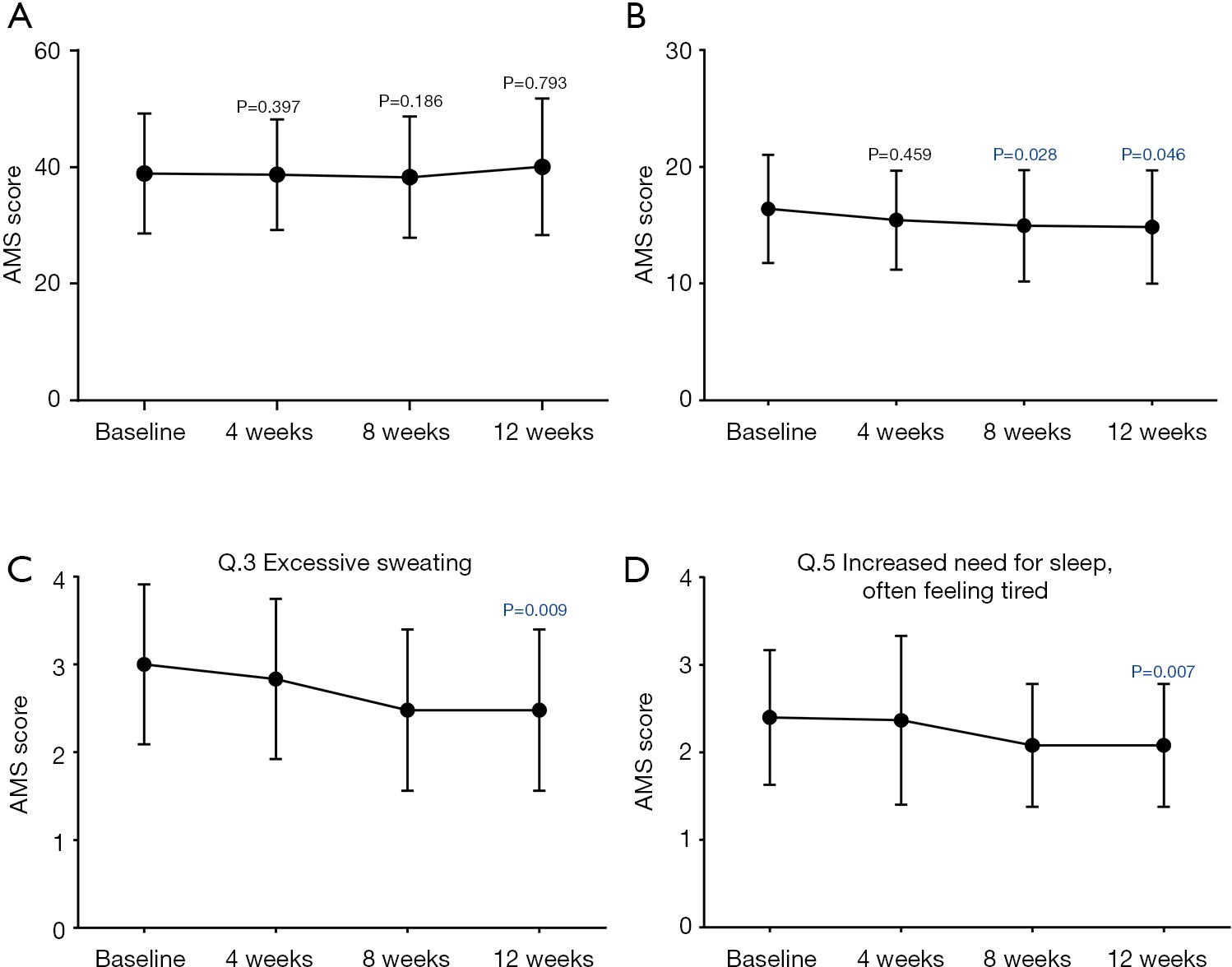 No biochemical parameters, including PSA and TT levels, showed significant changes during this trial. Six adverse events—increased GOT value, nausea, general malaise, thirst, reduced appetite, and sleep disorder—were observed in five cases, but all were mild. Two cases had adverse events that were undeniably associated with TJ-25 administration: nausea and general malaise in one case and sleep disorder in another. Treatment was discontinued in only one case of an adverse effect (sleep disorder). 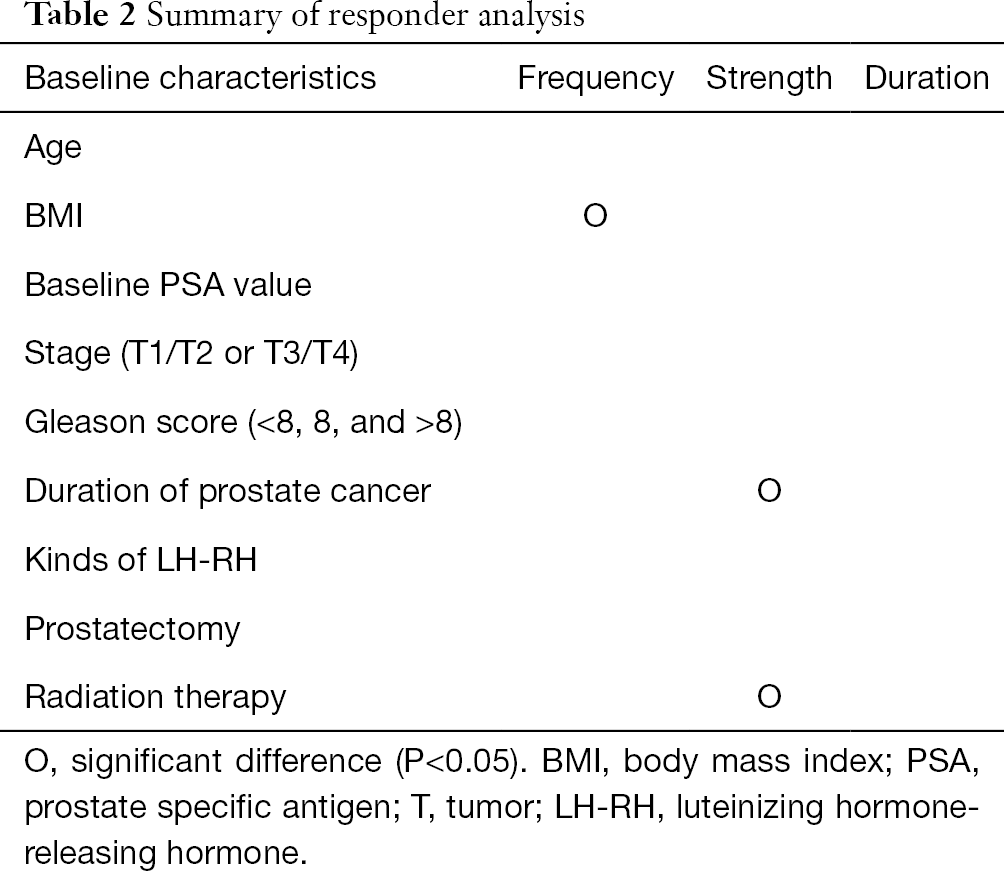 Keishibukuryogan (i.e., Gyejibokryeong-hwan or Guizhi-Fuling-Wan) has been widely used for the treatment of female climacteric syndrome in China, Korea, and Japan (6-8). This Kampo is effective for various symptoms caused by blood stasis, such as hot flashes, muscle stiffness, dizziness, and headache (9,10). Especially in Japan, Kampo treatments, which are covered by the Japanese national health insurance system, are very common in daily clinical practice in men and women.

Recently, it has been widely accepted that elderly men also suffer from various menopausal symptoms due to the decline in testosterone associated with aging (11,12). Previous studies have demonstrated the efficacy of Kampo treatments, including TJ-25, for hypogonadal men (13,14). ADT for PC patients often causes various menopausal symptoms including hot flashes, fatigue, and depression due to excessive testosterone decline (3). Hot flashes are one of the most common adverse effects of ADT and lead to decreased patient QOL. Therefore, many clinicians must treat hot flashes in patients receiving ADT.

There are various hypotheses regarding the mechanisms for the development of hot flashes with ADT. Disorders of the hypothalamic thermoregulatory center may be one possible mechanism, and sex hormone levels have potential effects on noradrenaline and endorphins in the hypothalamus, which are likely to be hypothalamic neurotransmitters (15,16). Another report suggested that serotonin may play an important role in the occurrence of hot flashes (17). Alternatively, calcitonin gene related peptide (CGRP), which is one of the vasodilator neuropeptides, is reportedly closely associated with hot flashes (18). In this report, CGRP administration resulted in elevated skin temperature in castrated rats, which was suppressed by 17-beta-estradiol and progesterone (18). However, there is currently no established mechanism for the development of hot flashes with ADT.

In the present study, TJ-25 administration improved the strength, frequency, and duration of hot flashes. The strength of hot flashes was significantly improved at the 4-, 8-, and 12-week visits, and frequency was significantly decreased at the 8-week visit. In addition, a reduction in hot flash duration was observed 8 and 12 weeks after treatment. This is the first prospective study to demonstrate efficacy of TJ-25 for hot flashes among PC patients receiving ADT.

Some mechanisms of the efficacy of TJ-25 for hot flashes have been proposed in ovariectomized rat models and postmenopausal women. An experimental study demonstrated that TJ-25, as well as 17-beta estradiol, inhibited the synthesis and release of CGRP, resulting in suppression of CGRP-induced hot flashes in the ovariectomized rat (19,20). In addition, TJ-25 improved hot flashes by reducing serum interleukin (IL)-8 and circulating monocyte chemotactic protein-1, which are involved in vascular inflammation and vasodilation, in postmenopausal women with hot flashes (21). On the other hand, few data on the efficacy of TJ-25 administration in men are currently available. One previous study revealed an increase in CGPR levels among PC patients with castration or LH-RH agonist injection, suggesting a similar mechanism for the occurrence of hot flashes in women and men (22).

We found that TJ-25 was more effective in patients with obesity, a medical history of radiation, or a longer duration of PC, and reasons for this are unclear. Since the efficacy and adverse effects of the same Kampo medicine are not identical for each patient, this is selected according to “Sho” (pattern of symptoms, excess or insufficient symptom-complex) of the patient. TJ-25 is generally recommended to patients displaying the excess (Jitsu-Sho) condition. Although we did not judge the “Sho” of each patient in the present study, many patients with these predictive factors were likely to display the excess condition. Alternatively, serum levels of inflammatory cytokines or various hormones significantly associated with hot flashes were likely to differ between the patients with these predictive factors and those without. Evaluating changes in the serum levels of various hormones and inflammatory cytokines due to TJ-25 administration warrants further investigation.

In the present study, although three adverse events, which were undeniably associated with TJ-25 administration, were observed in two cases, all could be tolerated. PSA and TT levels were not significantly changed by TJ-25 administration, suggesting that TJ-25 had no impacts on cancer control.

There were some limitations in the present study. Firstly, this study comprised a small number of subjects. In addition, this is a single-arm cross-sectional study and not a randomized controlled trial, and then the present results were likely to be affected by recall bias. Therefore, the efficacy of TJ-25 may include some placebo effects. Moreover, eligible patients visited our hospital every 4 weeks during the trial. It is possible that frequent contact with the doctors and coordinators had a positive impact on patients’ mental condition and anxiety. Therefore, further prospective randomized controlled trials including large numbers of participants are certainly required to validate the results of this study.

In conclusion, Keishibukuryogan is an effective and safe treatment for hot flashes in PC patients receiving ADT.

Funding: This work was supported in specific funding from Tsumura & Co., Tokyo, Japan.

Reporting Checklist: The authors have completed the STROBE reporting checklist. Available at http://dx.doi.org/10.21037/tau-20-901

Conflicts of Interest: All authors have completed the ICMJE uniform disclosure form (available at http://dx.doi.org/10.21037/tau-20-901). The authors have no conflicts of interest to declare.

Ethical Statement: The authors are accountable for all aspects of the work in ensuring that questions related to the accuracy or integrity of any part of the work are appropriately investigated and resolved. This study was approved by the Ethical Committee of the Kanazawa University Graduate School of Medical Science (2017-214) and was conducted in accordance with the Declaration of Helsinki (as revised in 2013). Witten informed consent was obtained from all study participants.