Does prophylactic ureteral catheter placement offer any advantage for laparoscopic gynecological surgery? A urologist’ perspective from a systematic review and meta-analysis

Iatrogenic urinary tract injuries are frequent in obstetrical and gynecologic surgery owing to the proximity of the urogenital organ systems, and delayed diagnosis and inappropriate medical interventions lead to high morbidity and even mortality (1). Ureteral injury is one of the most devastating and troublesome complications in gynecologic surgery (2). Moreover, iatrogenic ureteric injuries (IUI) have increased markedly during the past two decades (3) due to advances in endoscopic gynecologic surgery during the late 1980s and early 1990s (2-5). Thus, how to find ureteric injury promptly and effectively reduce ureteral injury should be emphasized in the management of laparoscopic gynecological surgery. The ureteral catheter placement is a simple procedure which contributes to identifying the ureteral course. However, whether ureteral stent should be placed routinely before laparoscopic gynecological surgery remains controversial. Therefore, we conducted a systematic literature review and meta-analysis of randomized control trials (RCTs) at home and abroad to explore this relationship. We present the following article in accordance with the PRISMA reporting checklist (available at http://dx.doi.org/10.21037/tau-20-674). 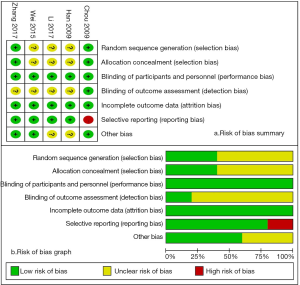 Figure 1 The risk of bias summary of included studies.

D Feng and Y Tang independently rated the level of evidence of the included articles using the Oxford Centre for Evidence-Based Medicine criteria (7); This scale graded studies from strongest (level 1) to weakest (level 5) strength of evidence on the basis of study design and data quality.

Figure 1 details the RoB summary of the 5 RCTs (8-12) included in this meta-analysis. In summary, included studies had a low risk of performance bias (blinding of participants and personnel), attrition bias (incomplete outcome data) and reporting bias (selective reporting). The risk of selection bias and detection bias were unclear due to lack of related description.

Comparable data from each study were merged in a meta-analysis where possible. We calculated pooled estimates of the mean difference (MD) or standard mean differences (SMD) and relative risk (RR) for continuous and dichotomous variables, respectively. We used the Cochran Q test to assess between-study heterogeneity (13). We also did I2 testing to evaluate the magnitude of the heterogeneity with values >50% regarded as being significant heterogeneity (14). The random effects model was used when the trials yielded heterogeneous (P<0.1) results. Otherwise, the fixed effects model was used. Significance was set at P<0.05. The present meta-analysis was performed using the Cochrane software Review Manager version 5.3.

Initial literature search yield 997 studies. After removing duplication, screening studies based on titles and abstracts and reviewing full articles, a total of 5 RCTs (8-12) consisting of 1,290 patients [676 in the catheterized group (CG) and 614 in the non-catheterized group (NCG)] were enrolled in the final analysis. The flow chart of the study selection is shown in Figure 2. 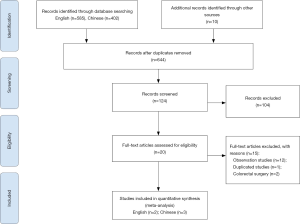 Figure 2 The flow chart of the study selection.

All studies were RCTs and contained patients treated with laparoscopic gynecological surgery. All 676 patients were treated with ureteral catheter placement while the remaining 614 patients did not. Two studies (8,9) were published in English and three trials (10-12) were published in Chinese. All of these studies reported outcomes of laparoscopic gynecologic surgery with or without prophylactic ureter catheter placement and were carried out in China. The sample size of included studies was relatively small and only 1 article contained more than 200 patients (8). Two studies had a duration of more than 5 years (8,9). One study enrolled patients undergoing laparotomy and laparoscopic gynecologic surgery (8), and we extracted the results of ureteric injury in laparoscopic-assisted vaginal hysterectomy and oophorectomy. All studies had major gynecological procedures and did not report major catheter-related complications. Table 1 details the main characteristics of included studies. 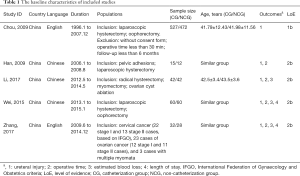 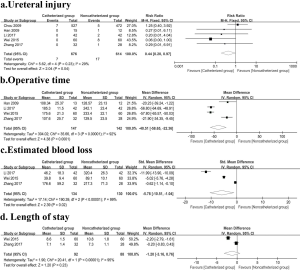 Figure 3 The outcomes of this meta-analysis.

Four studies (9-12) (289 patients) were included in the meta-analysis. The pooled data analysis showed a statistically significant difference in favor of prophylactic ureter catheter placement. A test for heterogeneity between the four studies was positive (P<0.00001, I2=92%), so a random-effect meta-analysis was conducted between the two groups (MD: −40.51, 95% CI: −58.65 to −22.36, P<0.0001) (Figure 3). We conducted sensitivity analysis by removing each study in sequence, and we did not observe a significant change after removing each trial.

With the increasing application of laparoscopy in gynecological surgery since the late 1980s, the number of IUI has increased markedly during the past two decades, partly because of the introduction of laparoscopy and the overall increase in surgical procedures (2-3,15). Additionally, the incidence of ureteral injury is related to the types of operations performed at different periods and the surgeons’ experience (16). The probability of ureteral injury in laparoscopic operations increases by 0.2–6.0% (2,17). Most doctors who can perform a radical hysterectomy have experience with laparotomy and basic laparoscopic surgery. However, due to insufficient understanding of the anatomy around the cervix under the microscope, unskilled manipulation, and the use of electric energy devices, urinary tract injuries are prone to occur in the early stages of such surgery (17). Among these complications, IUI is one of the most serious complications (2). Furthermore, laparoscopic radical hysterectomy requires opening the ureteral tunnel, which also increases the chances of ureteral injury and other severe complications (17). Notably, although laparoscopic surgery has a higher risk of ureteral injury than laparotomy, patients prefer laparoscopic surgery over open surgery due to less scarring, shorter LOS and less postoperative pain (2,17). IUI not only severely affects the physical and mental health of patients, but also increases the risk of doctor-patient disputes. Thus, an ability to discriminate and avoid the occurrence of ureteral injury is within the purview of the obstetrician-gynecologist accurately and promptly.

A meta-analysis of 79 mostly retrospective studies (18) shows that routine cystoscopy clearly increases the intraoperative detection rate of urinary tract injuries with an adjusted IUI rate of 0.3% and a bladder injury rate of 0.8%. How to effectively prevent the occurrence of ureteral injury is a problem that urgently needs to be solved in laparoscopic gynecological surgery. Currently, the efficacy and safety of prophylactic ureteral catheter placement before gynecological surgery is still controversial. Some experts supported the use of preoperative ureteral stent (2,17,19-20), while others are concerned about stent-related complications (8,21,22). In this scenario, we attempt to explore this relationship using a meta-analysis of 5 RCTs (8-12) at home and abroad to provide an evidence to guide clinical practice.

Our study observed a statistically significant decreased risk of ureteral injury in favor of CG group. The catheters straighten the ureters and offer clear visualization through the peritoneum without invasively exploring the retroperitoneal area (2). The specific advantages of preset catheter placement were as followed (9): (I) it can make the ureter bulge, with a clearer outline and easy identification; (II) it can increase the stiffness of the ureter, and the visual sense is more obvious when the surgical instrument is touched; (III) it can makes the ureter and its surrounding tissues and organs more clear, which is beneficial for separation; (IV) it can detect ureteral damage promptly and reminds the surgeon to deal with it in time; (V) it can avoid blindness of operation. Thus, prophylactic ureteral catheterization may shorten operative time and reduce EBL, which is consistent with the results of this meta-analysis. All studies (8-12) included in this meta-analysis did not report major catheter-related complications, and we may consider that this simple procedure is safe. Additionally, only one study conducted by Chou and his colleagues (8) reported the severity of ureteral injuries and they found that patients in CG group had a lower severity of IUI than their counterparts.

To our knowledge, our study is the first meta-analysis that evaluates laparoscopic gynecologic surgery with or without preset ureter catheter. However, our study does have the following limitations. Foremost, the broad heterogeneity in study populations, designs, and definitions of outcome measures. Secondly, the limited RCTs and the relatively small sample size make it difficult to emphatically confirm the advantages of prophylactic catheterization. Thirdly, the limitation of the study area prevented us from assessing the efficacy of preset ureteral catheter in foreign patients. Further large prospective randomized, double-blind study conducted by large volume and experienced surgeons are still needed to confirm our findings and definitively resolve this important controversy in gynecology.

Current evidence indicates that prophylactic ureteral catheter placement has the advantages of reducing ureteral injury, shortening the operative time and reducing the amount of bleeding. It might serve as a routine preoperative preparation choice for laparoscopic gynecological surgery, especially with pelvic adhesion. Further large volume, multicenter well-designed trials are warranted before making the final clinical guidelines.

Funding: This work was supported by the 1.3.5 Project for Disciplines of Excellence, West China Hospital, Sichuan University (ZY2016104) and Pillar Program from Department of Science and Technology of Sichuan Province (2018SZ0219). The funders had no role in study design, data collection or analysis, preparation of the manuscript, or the decision to publish.

Reporting Checklist: The authors have completed the PRISMA reporting checklist. Available at http://dx.doi.org/10.21037/tau-20-674

Conflicts of Interest: All authors have completed the ICMJE uniform disclosure form (available at http://dx.doi.org/10.21037/tau-20-674). The authors have no conflicts of interest to declare.