Successful management of prostate cancer with bulky pelvic lymph node metastases after rapid development of castration-resistant prostate cancer: a case report with review of the literature

Prostate cancer is the second most common cancer and the fifth leading cause of cancer death seen in males worldwide (1). In China, a steady and rapid increase in both the incidence and the mortality rate of prostate cancer has been observed since 2000. According to the cancer statistics published by National Cancer Center in 2019, the estimated new cases of prostate cancer is 72,000, while the estimated deaths is 31,000 in China (2). It is reported that patients with regional nodal involvement, who usually have a poorer prognosis for subsequent systemic disease progression (3), can frequently be observed in our daily practice. Androgen deprivation therapy (ADT) and radiotherapy with/without abiraterone is the standard of care (SOC) for regional prostate cancer, but such treatment strategy may not have the similar effect in the setting of bulky lymph node metastases and short PSA doubling time.

It is key to shrink the tumor as much as possible so as to create the opportunity of definitive local treatment for such patients. ADT with or without antiandrogen may be not enough to carry this point. Despite the survival benefit and distant metastasis rate reduction have been reported in high risk patients, chemotherapy is not yet recommended in those patients partly due to its adverse events (4). There is an estimated average time of 2–3 years from the initiation of ADT to castration-resistant prostate cancer (CRPC) development (5). However, patients with highly malignant tumor who develop rapidly to non-metastatic CRPC (nmCRPC) in only several months are also occasionally observed. Some scholars believe that early use of docetaxel in nmCRPC patients may prolong overall survival (OS) (6). On the other hand, whether there is a role of radiotherapy in nmCRPC is a question that has been long raised. To our knowledge, no result of clinical trials on radiotherapy with/without chemotherapy has been reported in regional nmCRPC patients.

Herein, the following case report presents a patient with locally advanced prostate cancer and bulky lymph node metastases, who rapidly developed nmCRPC after 9-month ADT treatment. His disease has been effectively controlled and the quality of life has been well maintained after chemotherapy plus definitive radiotherapy (7). We present the following case in accordance with the CARE reporting checklist (available at http://dx.doi.org/10.21037/tau-20-725).

Figure 1 Representative photomicrographs of hematoxylin-eosin and immunohistochemistry staining of the case. (A) Prostate needle biopsy. Microscopic appearance of the prostatic adenocarcinoma with Gleason score: 4+4=8 (ISUP Grade 4); (B) diffuse and strong nuclear immunoexpression of Androgen Receptor (AR) (3+, 95% positivity); (C) moderated to strong cytoplasmic immunoexpression of MUC1 (2+~3+, 30% positivity); lack of expression of AR-V7 (D) and BRCA1 (E). All images are shown as ×200 magnification. 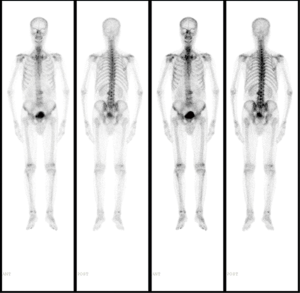 Figure 2 The bone scan images showed no obvious bone metastasis at the time of initial diagnosis. 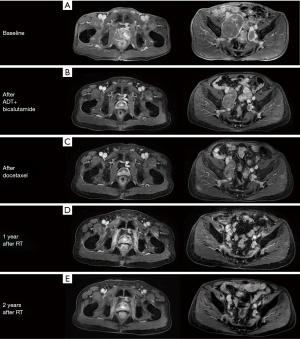 The patient was initially treated with bicalutamide 50 mg daily and goserelin 10.8 mg every 84 days, and his serum testosterone soon reached castration level. A PSA nadir of 13.07 ng/mL was achieved after 9 months, but soon his PSA continued to rise and no distal metastasis was found (Figure 3B) and nmCRPC developed. Given his rapid progression to nmCRPC, targeted next-generation sequence analysis was performed using post-treatment blood sample to elucidate the potential related genetic variations. However, no gene mutation of clinical significance was found. Chemotherapy-related polymorphism analysis suggested low toxic effects on docetaxel [CYP4B1 (rs4646487): CC, ERCC1 (rs11615): AG, VAC14 (rs875858): CC].

After the multidisciplinary discussion, the patient received docetaxel 75 mg/m2 every 21 days for 6 cycles, after which his serum PSA decreased to 9.01 ng/mL, and metastatic lymph nodes continually shrank (Figure 3C). Subsequently, he received image-guided volumetric modulated arc radiotherapy (IGRT-VMAT), with a total dose of 67.5, 60–65 and 47.5 Gy in 25 fractions to the prostate, the enlarged lymph nodes and the whole pelvis, respectively. The treatment was well-tolerated, with only grade 2 neutropenia during chemotherapy and grade 1 acute rectal hemorrhage after radiotherapy.

His serum PSA decreased to 4.64, 1.78, 0.869 and 0.428 ng/mL, 1, 4, 10 and 22 months after radiotherapy respectively, and the sizes of primary tumor and metastatic lymph nodes continued to decrease (Figure 3D). At the time of this report, 34 months after radiotherapy and 50 months after diagnosis, the patient remains well and is able to do farm work. The pelvic MRI shows no sign of tumor in the prostate and the previous bulky lymph node has shrunk to only 8 mm (Figure 3E). Bone scan indicates no sign of metastasis (Figure 4). His PSA keeps declining and has reached 0.008 ng/mL (Figure 5). The timeline picture was shown in Figure 6. 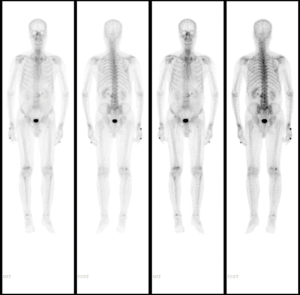 Figure 4 The latest bone scan images showed no sign of bone metastasis at the time of this report. 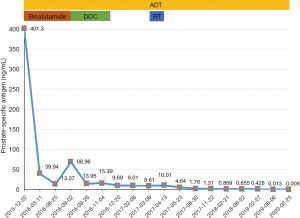 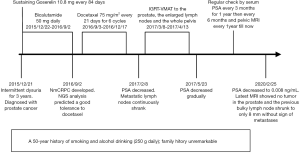 Prostate cancer is primarily an androgen-driven disease, and castration-resistance is often driven by AR signaling reactivation. According to the current guidelines, secondary hormone therapy is SOC for nmCRPC, neither chemotherapy nor radiotherapy has been recommended to treat nmCRPC patients. We report a rare case of locally advanced prostate cancer with bulky regional lymph node metastases and high initial PSA level, which obtained dramatic response to chemotherapy and subsequent radiotherapy after rapid progression on ADT and antiandrogen.

The prognosis of CRPC patients with lymph node metastases is poor, the median OS of which is estimated only 31.6 months (8). Apalutamide and enzalutamide are preferred to treat nmCRPC for the encouraging results from the PROSPER trial and the SPARTAN trial, and earlier use of androgen receptor-axis-targeted drugs (ARAT) may improve OS, PFS, and PSA response (9). However, the PROSPER trial does not clarify the nodal status of the patients enrolled, while the SPARTAN trial excludes patients with lymph nodes more than 2 cm. Besides, it is believed that patients with prior short duration of response to ADT may present with unfavorable response to next generation ARAT in CRPC. Among patients with less than 12 months to CRPC, only 16% patients respond to ARAT, and the median PFS is only 2.8 months even when enzalutamide is given (10). In this particular case, our patient presented with bulky lymph node metastases and developed nmCRPC after only 9-month combined use of ADT and antiandrogen, so limited efficacy of ARAT could be expected. Given the disappointing response rate, the financial burden and the lack of availability of apalutamide and enzalutamide in China, we had to seek a new treatment strategy.

We tested the expression status of several tumor markers by IHC staining using his pre-treatment prostate biopsy samples, as he refused second biopsy in 9 months. We were not surprised to find the biopsy specimens were positive for AR and negative for ARV7, since his tumor was hormone sensitive at the beginning of ADT, while ARV7 is seldom expressed in hormone-sensitive prostate cancer (HSPC) (11). It was also worth noting that MUC1 was partially positive and BRCA1 was negative in this IHC staining. Previous study suggests that MUC1 is aberrantly expressed in prostate cancer with aggressive pathological features and poorer clinical outcomes, including larger tumor volume as well as nodal involvement, and early disease progression (12). These findings could, in part, explain the bulky lymph node metastases and early ADT resistance in our case. BRCA1 is a regulator of prostate cancer radiosensitivity, which has been reported that knockdown of BRCA1 can lead to significant radiosensitization of prostate cancer cells in vitro (13). Thus, prostate cancer patients with BRCA1 negative expression may have a good response to radiotherapy.

Individuals with rapid progression to CRPC may have poor response to hormone therapies but not to chemotherapy. Docetaxel has been widely used in mCRPC over a decade and is recommended by NCCN guideline. For high risk localized patients, including those with regional lymph nodes metastasis, the use of docetaxel-based chemotherapy before definitive local therapy can improve relapse-free survival (4). However, for nmCRPC, there is only one retrospective study shows that the early use of docetaxel can prolong median OS (6). Toxicity is one of the major concerns regarding docetaxel, but some previous studies reveal that docetaxel is safe and its toxicity will disappear in 1 year without lifelong influence (14). Despite our patient is of advanced age, his chemotherapy-related polymorphism analysis suggests low docetaxel-induced toxicity. Indeed, the patient tolerated well during chemotherapy and after 6 cycles of docetaxel, his total PSA dropped sharply from pre-chemotherapy value of 68.96 to 8.61 ng/mL. Thus, using docetaxel in the treatment of nmCRPC prior to ARAT in carefully selected patients might provide a new train of thought.

The addition of radiotherapy to ADT could significantly prolong survival in patients with lymph node metastases (3), making it indispensable in node-positive disease in current practice. Local radiotherapy for nmCRPC may hopefully provide excellent local-regional control, delay biochemical recurrence (15). Despite the high-level prospective evidence is still lacking, several retrospective studies have supported the application of radiotherapy in nmCRPC (Table 1).

As in our case, while nmCRPC with bulky regional lymph node metastases is especially rare and refractory, satisfactory tumor control has been achieved by the combined use of ADT, docetaxel and radiotherapy. However, the evidence is limited with only one case currently, and further prospective study is urgently needed to confirm the role and timing of radiotherapy in nmCRPC.

Prostate cancer patients with regional lymph node metastases is highly heterogeneous, and those with bulky tumor are highly malignant and potentially rapidly develop to CRPC. Molecular analysis may be helpful to better understand internal biological characteristics. Individualized and multimodal therapy, including intensification of systemic therapy and timely application of radiotherapy could be suggested in such cases.

“I was once very anxious about my disease and worried about the possible toxicities of hormone therapy, chemotherapy and radiotherapy. But after receiving these treatments, I feel no obvious discomfort. Now, there has been more than 4 years since I was diagnosed with advanced prostate cancer, and I feel great and very satisfied with my condition.”

Reporting Checklist: The authors have completed the CARE reporting checklist. Available at http://dx.doi.org/10.21037/tau-20-725

Conflicts of Interest: All authors have completed the ICMJE uniform disclosure form (available at http://dx.doi.org/10.21037/tau-20-725). The authors have no conflicts of interest to declare.

Ethical Statement: The authors are accountable for all aspects of the work in ensuring that questions related to the accuracy or integrity of any part of the work are appropriately investigated and resolved. Written informed consent was obtained from the patient for publication of this case report and any accompanying images.