Cystitis glandularis (CG) is a proliferative disorder of the bladder mucosa characterized by transitional cell glandular metaplasia. Typical and intestinal types of CG have been described (1). CG has been occasionally demonstrated to be a locally aggressive benign lesion (2). While it is reported that CG was associated with adenocarcinoma of the bladder, the causal relationship has yet to be fully established (3).

The pathogenesis of CG is not well understood. Through immunohistochemical techniques and in situ hybridization, expression of P16 in samples with CG were found to be abnormal, with expression in normal bladder mucosa defined as normal (4). After treatment, expression levels of p53 and Ki-67 were significantly lower in the bladder mucosa of patients with CG, suggesting that p53 may be involved in the development of CG (5). A recent comparative analysis of RNA sequencing of CG tissues and normal control tissues revealed differential expression (DE) of multiple genes including CX3CL1, CXCL6 and CXCL1, suggesting that these genes may be associated with the pathogenesis of CG (6). However, these limited studies do not effectively assess a correlation between molecular markers and the development of CG.

The understanding of the cellular control of genetic expression is rapidly expanding. Recently, gene expression has been shown to be inhibited by small, non-coding RNAs called microRNAs (miRNAs). miRNAs are RNAs of approximately 20 nucleotides in length that undergo base-pairing with complementary sequences in messenger RNA (mRNA), resulting in cleavage of the mRNA, destabilization of the mRNA, and less efficient translation of the mRNA. Individual miRNA can target many different genes. This miRNA-mediated post-transcriptional regulation of gene expression is believed to be present in half of all genes (7).

One type of long non-coding RNAs (lncRNAs) can bind to miRNAs and alter their inhibitory effect on mRNA expression, which adds another layer of control to mRNA expression (8). These lncRNAs are also called competing endogenous RNAs (ceRNAs) (9-12). The biological function of lncRNA has received great attention in recent years. Although it does not encode proteins, lncRNA does participate in many important biological processes (BP) (13-15). For example, Montes et al. reported that lncRNA MIR31HG targets p16 expression to regulate senescence (16). Additionally, Liu et al. found that lncRNA-UCA1 was regulated by p27 protein expression in primary cardiomyocytes to promote apoptosis (17).

We previously reported that several non-coding RNAs have been discovered, and we also found that lncRNA UCA1 plays an important role in the progression of CG (18-22). In this study, we aimed to investigate the role of novel lncRNAs expression in patients with CG. We used microarray screening to analyze the expression profiles of lncRNAs and mRNAs in normal and CG bladder tissues. Gene ontology (GO) and Kyoto Encyclopedia of Genes and Genomes (KEGG) analyses were performed to predict the biological roles and potential signaling pathways of these differentially expressed lncRNAs. A coding-non-coding co-expression (CNC) network and ceRNAs analysis were performed to explore the potential roles of differentially expressed lncRNAs in CG pathogenesis.

Tissue from three cases of typical CG and three normal bladders (N) were obtained from the Department of Urology, Xiangya Hospital. Diagnosis was made by pathologic examination of biopsied tissue. No patient had any other urinary disease. All specimens were stored in liquid nitrogen immediately after surgical resection and were transferred to a freezer maintained at –80 °C.

Labeled cRNA from each tissue specimen was fragmented according to a modified protocol. In brief, cRNA was placed in 10× blocking agent and 25× fragmentation buffer and incubated at 60 °C for 30 min. Then 2× GE hybridization buffer was added to dilute the labeled cRNA to stop the fragmentation reaction. Subsequently, hybridization solution was dispensed into the gasket slide, which was then assembled with the lncRNA expression microarray slide. The slides were incubated for 17 h at 65 °C in an Agilent Hybridization Oven. The hybridized arrays were washed, fixed and scanned using an Agilent Technologies G2505C SureScan High-Resolution DNA Microarray Scanner (Agilent Technologies, Santa Clara, CA, USA). Microarray hybridization and expression data collection were performed by KangChen Bio-tech, Shanghai, China.

A two-fold change (FC) in expression between CG and normal tissues was considered significant. This was calculated as log2 (CG/N). All values greater than 0.58 were up-regulated and all values less than –0.58 were considered down-regulated genes.

Total RNA was isolated from tissues to generate cDNA using the SuperScript III Reverse Transcriptase (Invitrogen, Grand Island, NY, USA). Each cDNA sample was amplified using a Biosystems ViiA 7 Real-Time PCR System. Each cycle consisted of denaturation at 95 °C for 10 s and extension at 60 °C for 60 s. β-actin was used as an endogenous control to normalize each sample. The primers are listed in Table 1. 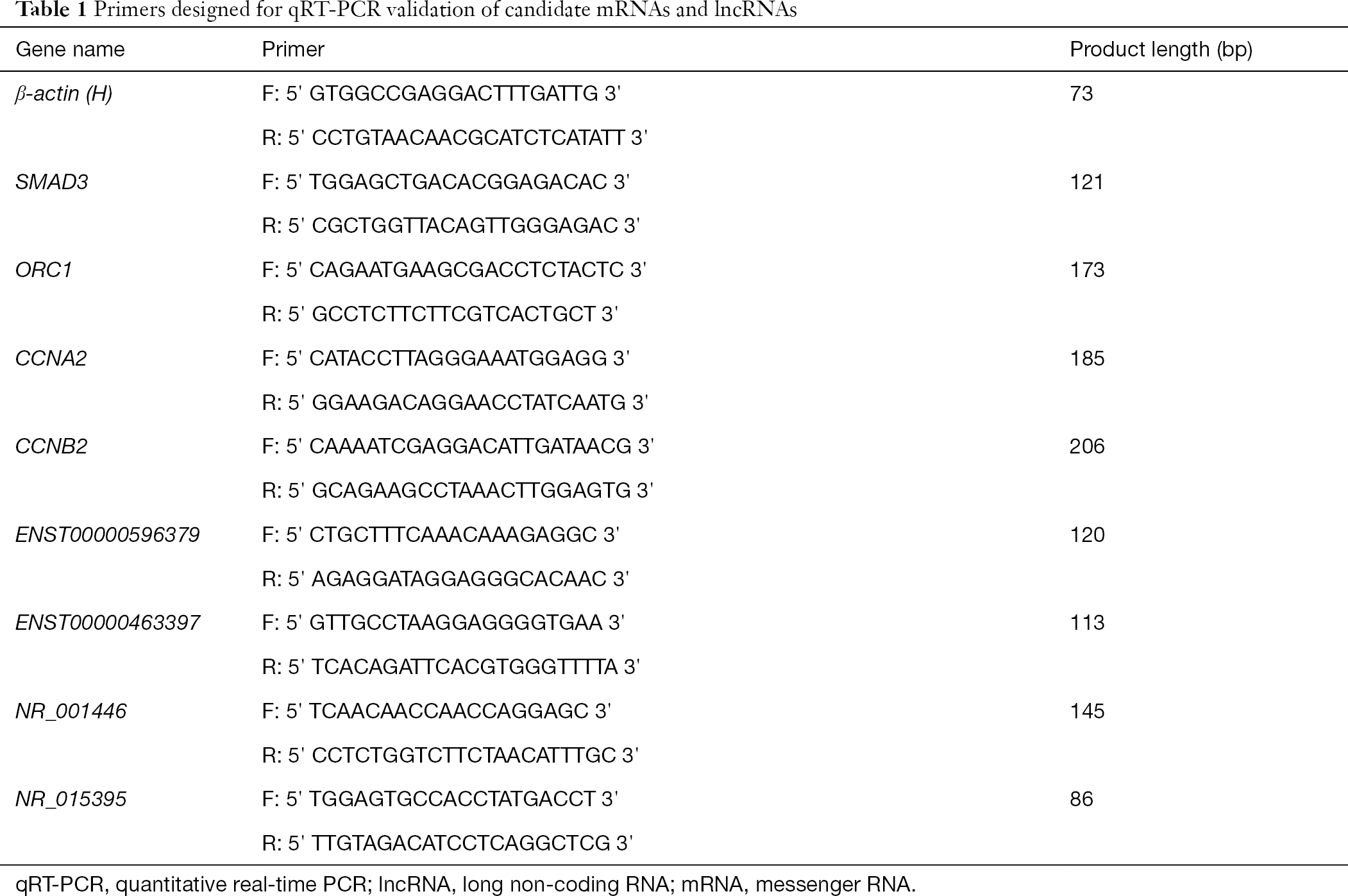 The GO project provides a controlled vocabulary to describe gene and gene product attributes in any organism (http://www.geneontology.org). The ontology covers three domains: BP, cellular components (CC) and molecular functions (MF). A Fisher’s exact test was used to the compare expression of CG and normal tissues of items found in the DE and GO annotation lists. P values less than 0.05 were considered statistically significant. KEGG pathways (http://www.genome.jp/kegg/) were used to describe molecular interactions, reactions, and relation networks of identified genes and gene products.

To identify interactions among the differentially expressed mRNAs and lncRNAs, we constructed a CNC network. The network was constructed according to the normalized signal intensities of specific mRNA and lncRNA expression levels. A Pearson correlation coefficient >0.95 was used as a cutoff to identify coding and non-coding genes.

lncRNAs and mRNAs from CG specimens with significantly different expression than that found in normal tissues were subjected to ceRNA network nalysis in order to identify potential miRNA response elements (MREs). Overlapping of the same miRNA seed sequence binding site on both lncRNAs and mRNA sequences was identified in order to predict potential interactions. Potential targets of miRNAs were predicted using our miRNA target prediction software that is based on TargetScan (http://www.targetscan.org/) & miRanda (http://www.mircorna.org/). 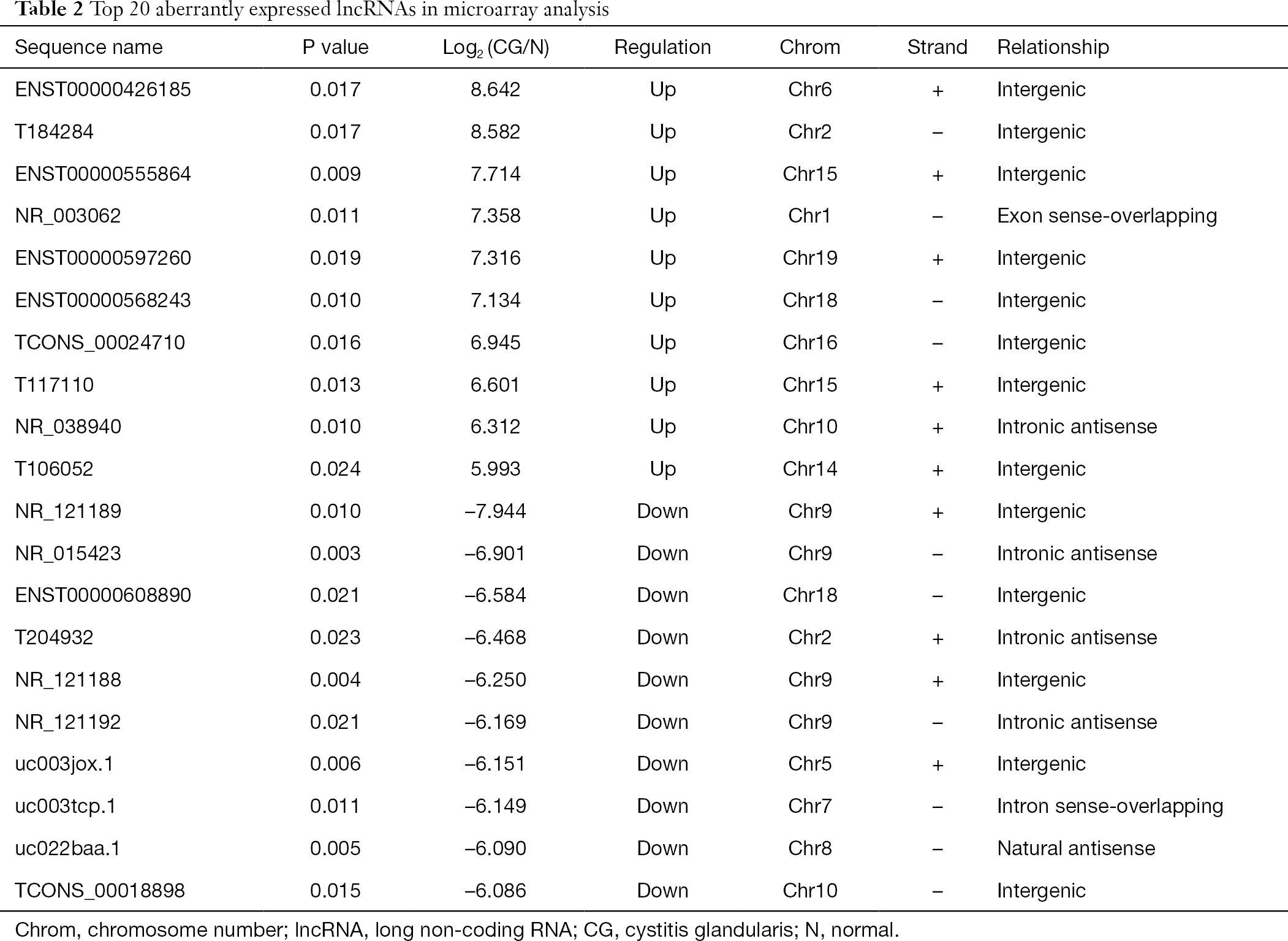 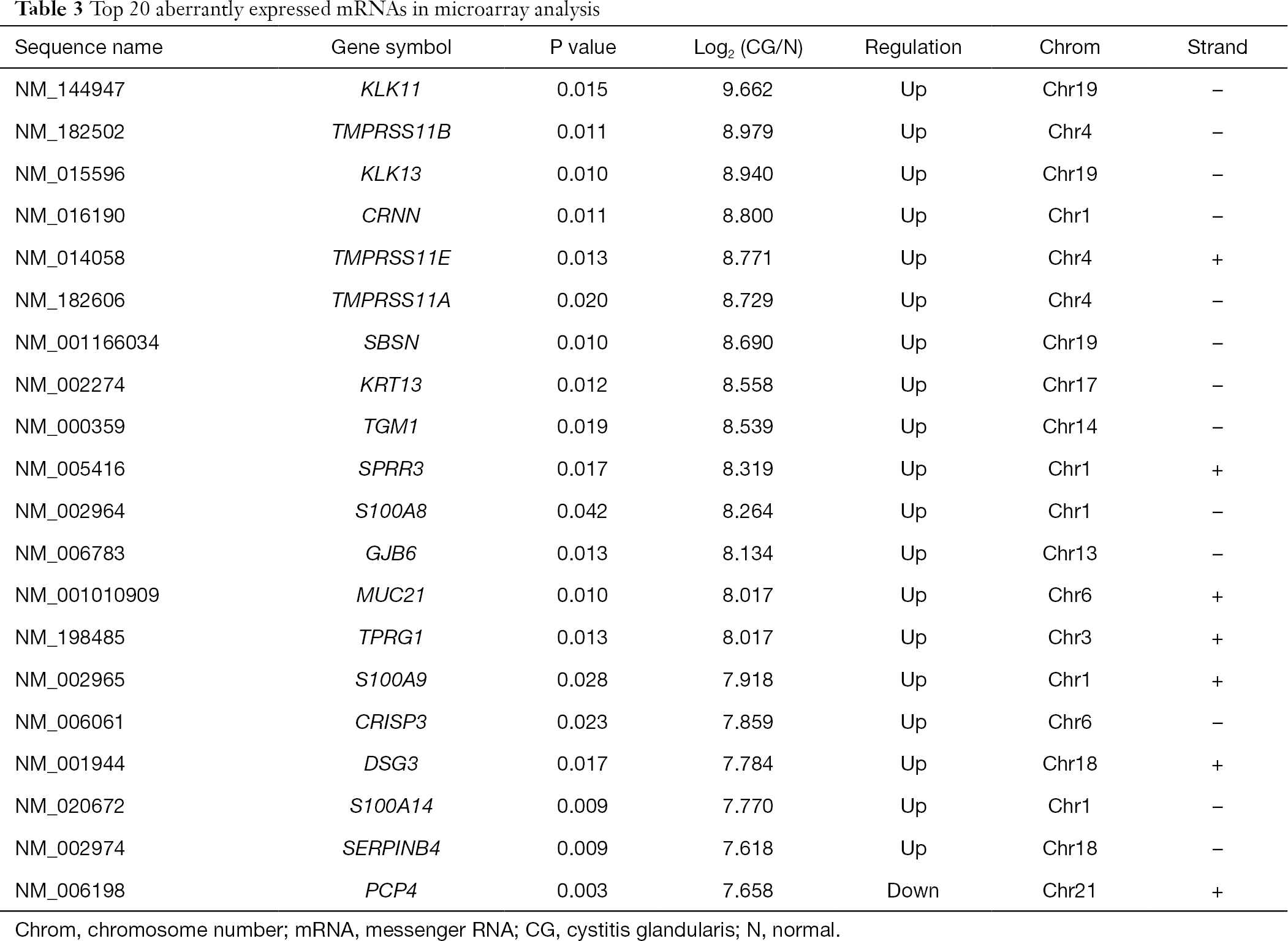 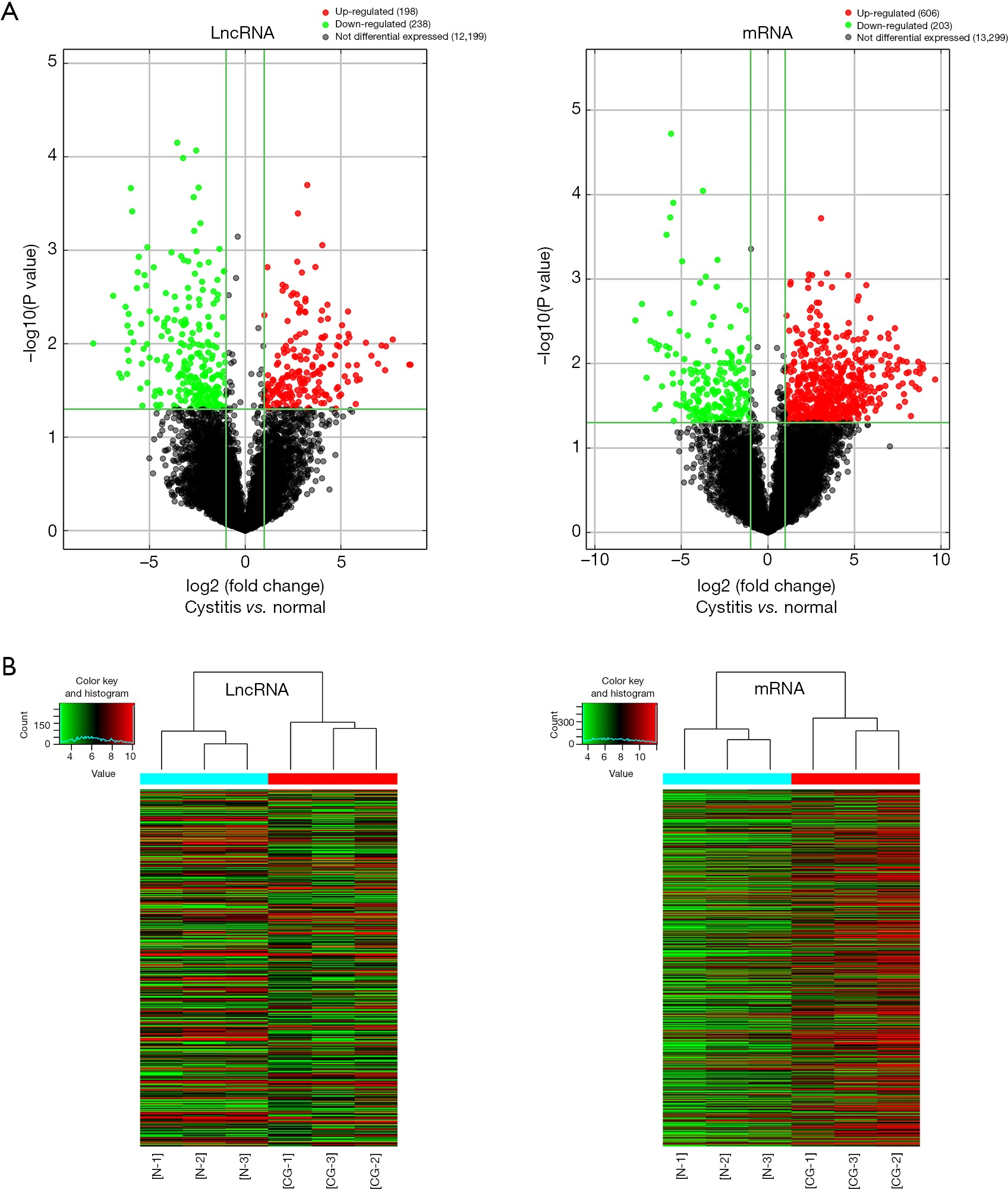 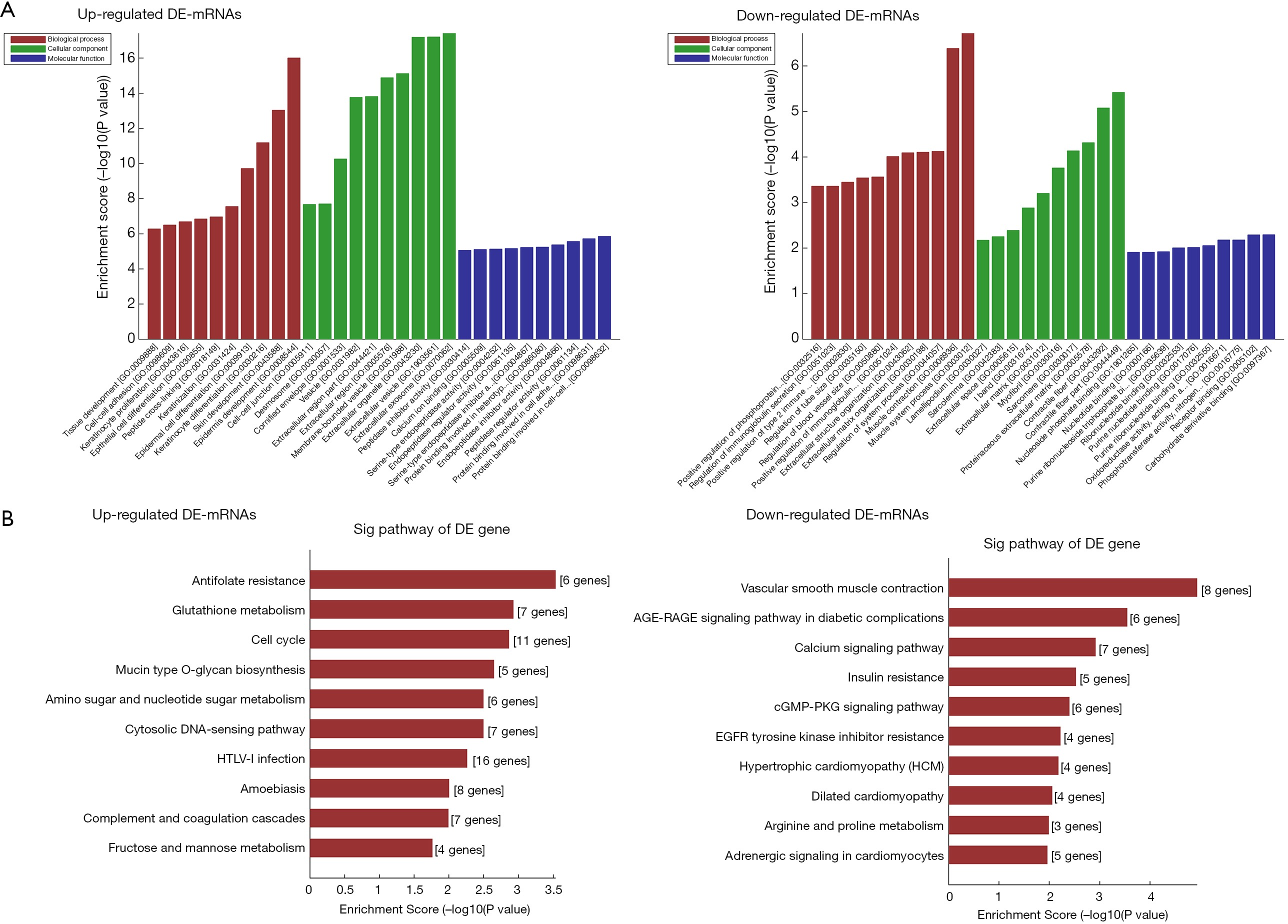 KEGG pathway analysis indicated that the mRNAs co-expressed with lncRNAs were involved in the regulation of cell cycle. The top 10 KEGG pathways are listed in Figure 2B.

Sequences that affect cell cycle progression were found in microarray analyses to be dysregulated in CG. Four related mRNAs, mothers against decapentaplegic homolog 3 (SMAD3), origin recognition complex subunit 1 (ORC1), cyclin A2 (CCNA2), and cyclin B2 (CCNB2), were selected for verification by qRT-PCR (Figure 3A).

Pearson coefficient analysis revealed that expression of these four genes was associated with expression of 37 other genes. Co-expression network profile analysis demonstrated 41 network nodes and 71 connections among the four mRNAs and 37 differentially expressed lncRNAs (Figure 3B). There were 24 negative and 47 positive correlations within the network. Four up-regulated lncRNAs were randomly chosen for qRT-PCR validation (ENST00000596379, ENST00000463397, NR_001446 and NR_015395). As expected, the four lncRNAs were up-regulated in the CG tissues compared to normal tissues (greater than 2-fold, P<0.05) (Figure 3C), which is consistent with the microarray chip data.

Different ceRNAs have been shown to compete for the same MREs, regulating different levels of expression for each ceRNA (8). To investigate whether the four lncRNAs (ENST00000596379, ENST00000463397, NR_001446 and NR_015395) and four mRNAs (SMAD3, ORC1, CCNA2 and CCNB2) share any common MRE binding sites, a ceRNA network in CG was constructed with these elements from the microarray data. NR_015395 is a ceRNA of miR-133a-3p that targets SMAD3. Pearson coefficient analysis showed that expression of these two elements was correlated with the expression of 53 other genes (Figure 4). 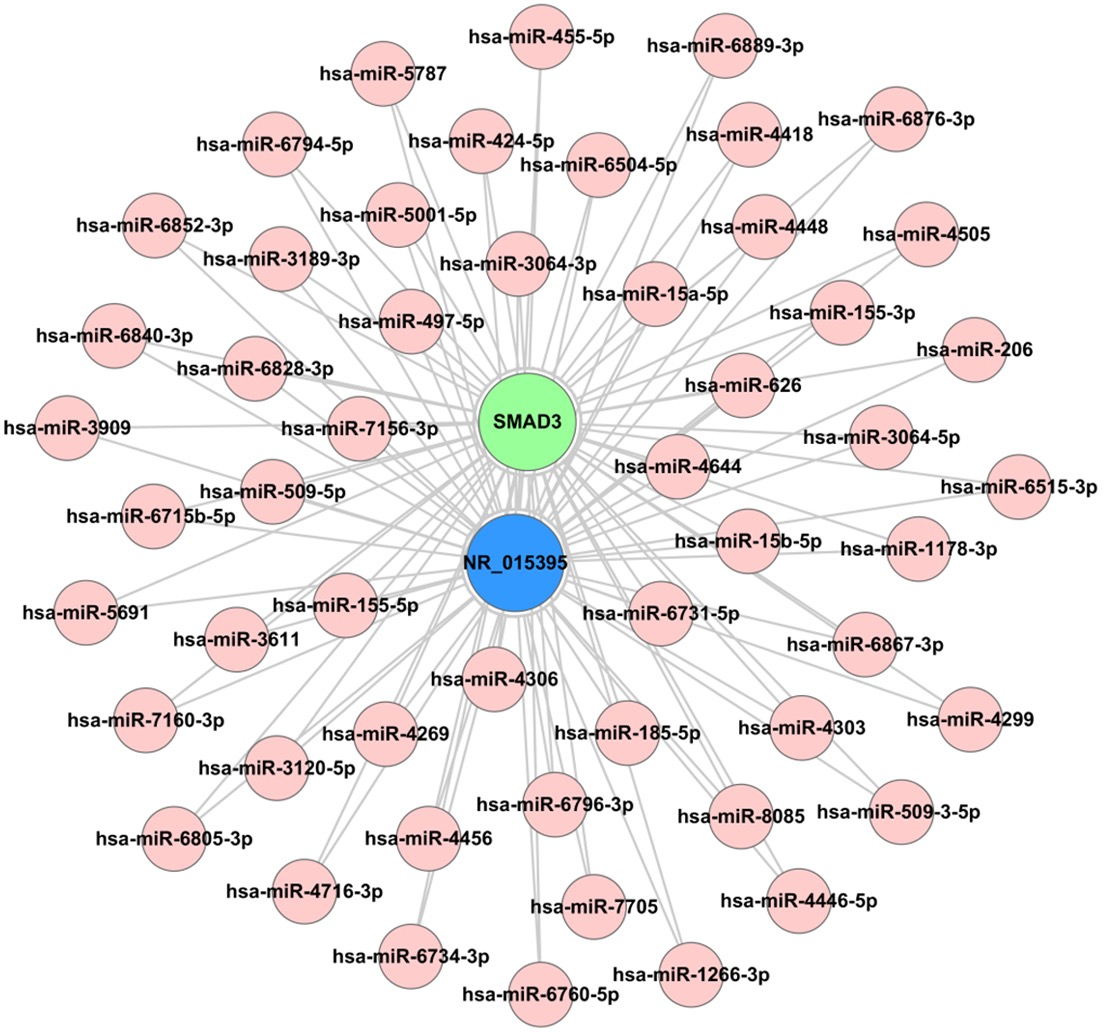 Cellular proliferation and glandular metaplasia were observed in the transformation of normal bladder mucosa to CG. These changes were caused by alterations in the regulatory mechanisms that control normal cellular maintenance and growth-related functions. We examined the expression of mRNAs and lncRNAs in normal bladder mucosa and CG in order to identify abnormally expressed genetic material associated with the development of CG.

Using a second-generation lncRNA microarray, 809 mRNAs with abnormal expression in CG were identified. Of these, 606 mRNAs were found to be significantly up-regulated in CG as compared to normal bladder tissue (FC ≥2.0, P<0.05). Four mRNAs were related to cell cycle progression, SMAD3, ORC1, CCNA2 and CCNB2, and had increased mRNA expression in CG. This increased expression was verified with qRT-PCR.

We suggest a ceRNA mechanism maybe involved in this binding because of the consistent expression trends, and there may also be some shared MRE sites. The results of ceRNA network for CG showed that NR_015395 was a ceRNA of miR-133a-3p that targets SMAD3. These findings suggest that altered lncRNA expression (ceRNA) may be involved in CG-associated signaling pathways. In future work, we plan to establish more molecular mechanism at the clinical, cellular, animal, and molecular levels to provide new experimental evidence for the pathogenesis of CG. Solving these key problems will help us understand the molecular mechanism underlying the occurrence and development of CG and provide a theoretical basis as well as drug targets for new prevention and treatment strategies to inhibit dysuria through interruption of the inflammatory response.

This study has some limitations. A small number of tissue samples were examined. The analysis method identifies first-order miRNA-mediated lncRNA-mRNA associations but does not identify other influences. This method does not verify targets regulated by translational repression because it is based on changes in the transcript level. Further validation of the identified associations is needed.

Collectively, microarray data was used to identify mRNAs, lncRNAs, and ceRNAs with significantly altered expression profiles in CG. These findings were validated using qRT-PCR. Dysregulated mRNA from BP, CC and MF were unveiled. A significant dysregulation of lncRNAs was also observed. While these findings provide novel insights to the latent role of lncRNAs in CG, further research is required to fully explain their role in inducing transitional cell glandular metaplasia.

Conflicts of Interest: All authors have completed the ICMJE uniform disclosure form (available at http://dx.doi.org/10.21037/tau.2020.03.01). XG and XZ serves as an unpaid editorial board member of Translational Andrology and Urology from Mar 2019 to Feb 2021. The other authors have no conflicts of interest to declare.

Ethical Statement: The authors are accountable for all aspects of the work in ensuring that questions related to the accuracy or integrity of any part of the work are appropriately investigated and resolved. This study was approved by the Ethics Review Board of Xiangya Hospital, Central South University (Changsha, China). Informed consent was obtained from all patients (ethical approval ID: 201803086).