Bladder cancer represents the most common malignant neoplasm of the urinary tract. Bladder cancer is histopathologically heterogeneous and comprises urothelial carcinoma (UC, more than 90%), squamous cell carcinoma (SqCC), adenocarcinoma and neuroendocrine tumors (1). Accounting for less than 5% of all bladder cancers, SqCC is of low incidence (2), with limited published data. Although surgery is the standard therapy, bladder SqCC is an independent predictor of worse cancer-specific survival (CSS) and is associated with poor responses to chemotherapy and radiotherapy (3-5).

Bladder SqCC is closely linked to chronic inflammation (6,7). The primary role of inflammatory cells within the tumor micro-environment (e.g., Tumor-infiltrating lymphocytes, TILs) is to distinguish malignant cells (8). The programmed cell death ligand-1 (PD-L1) pathway has distinct effects in immune regulation of anti-tumor hosts. By binding to its receptor in the micro-environment of TILs, PD-L1 may result in suppression of immune cells (8,9). PD-L1 expression, identified by immunohistochemical staining, could be an independent prognostic marker (10).

Since 2016, five immune checkpoint inhibitors (ICIs) have been introduced for metastatic urinary bladder carcinoma (mUBC) as second-line treatment of post platinum-based chemotherapy or for cisplatin-ineligible patients (13). However, only 20-30% patients with mUBC (metastatic urothelial bladder carcinoma) achieved a partial or complete response to immune-checkpoint inhibitors, which could be interpreted by relatively lower expression of PD-L1 (15–35%) in urothelial carcinoma (14). The etiology and pathogenesis of SqCC are closely related to inflammation, and the poor prognosis requires special attention. Therefore, it is meaningful to study the expression of PD-L1 in SqCC, which could also provide basic/experimental evidence for clinical immunotherapy studies. In the current study, we aimed to explore the expression and prognostic value of PD-L1 in non-schistosoma-associated urinary bladder SqCC under the consideration of TILs density.

We enrolled 604 muscle-invasive bladder cancer patients who underwent radical cystectomy (RC) from January 2009 to December 2013 in our center. A total of sixty-seven cases were pathologically diagnosed as non-schistosoma-associated bladder SqCC, including pure SqCC (n=19) and mixed SqCC (n=48, with UC) (15). Patients were excluded if they had any of the following conditions: (I) patients with previously diagnosed cancers or autoimmune diseases; (II) patients with incomplete clinical data and unavailable cystectomy specimens; (III) patients who underwent neoadjuvant or adjuvant chemotherapy and/or radiation therapy; (IV) patients with positive surgical margin status; (V) patients who were lost to follow-up. The research was approved by the Ethics Committee, Peking University First Hospital. Informed consents were obtained from all participants in the study. Clinical and pathological information was retrospectively collected from the medical record library database. The pTNM staging was based on the 7th IUCC/AJCC recommendations. 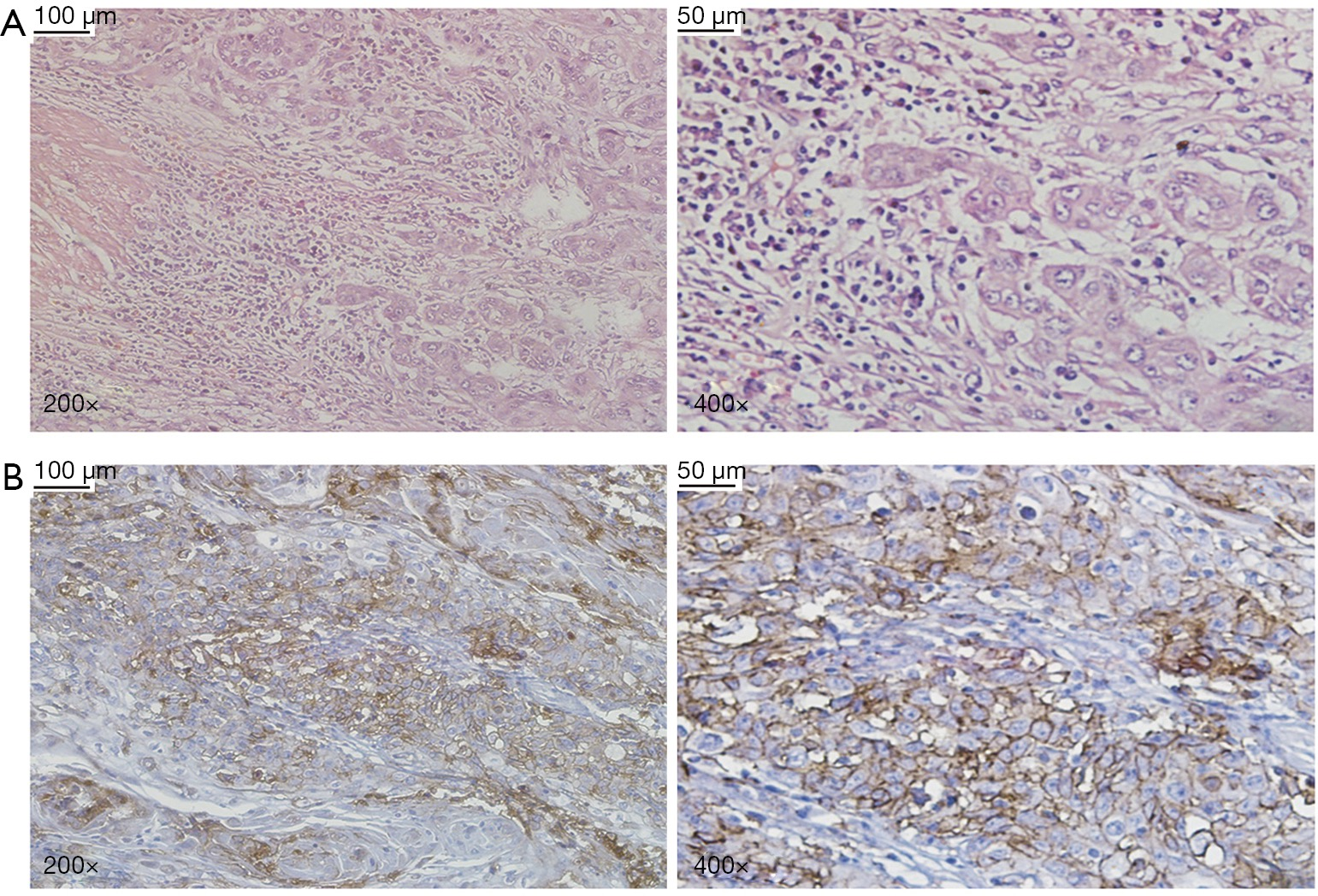 In the tumor microenvironment, we described PD-L1 expression as the percentage of cells showing immune reactivity on the cell membrane (Figure 1). Whole areas were surveyed microscopically at 40 magnifications to identify focally stained regions. In cases of multiple areas of focal staining, three randomly selected areas were scored. Percentage of PD-L1 positive cells among total cells within focally stained regions was measured. Positive expression of PD-L1 was described as >5% membranous staining (18,19). Two experienced observers independently graded the staining with Image-Pro software (Corp: Media Cybernetics, Version 7th; USA) (17). When a discrepancy occurred, a third pathologist would examine the slides and determine the final score.

SPSS software (Corp: IBM, Version 20th; USA) was used in the statistical analysis. Student’s t test was used to compare groups, and Fisher’s test to determine differences (17). We used Kaplan-Meier (K-M) method to estimate overall survival (OS) as well as progression-free survival (PFS) (20). We utilized Cox regression models to perform the univariate and multivariable survival analysis. All the statistics were two-sided, and statistically significant was considered at P value <0.05. 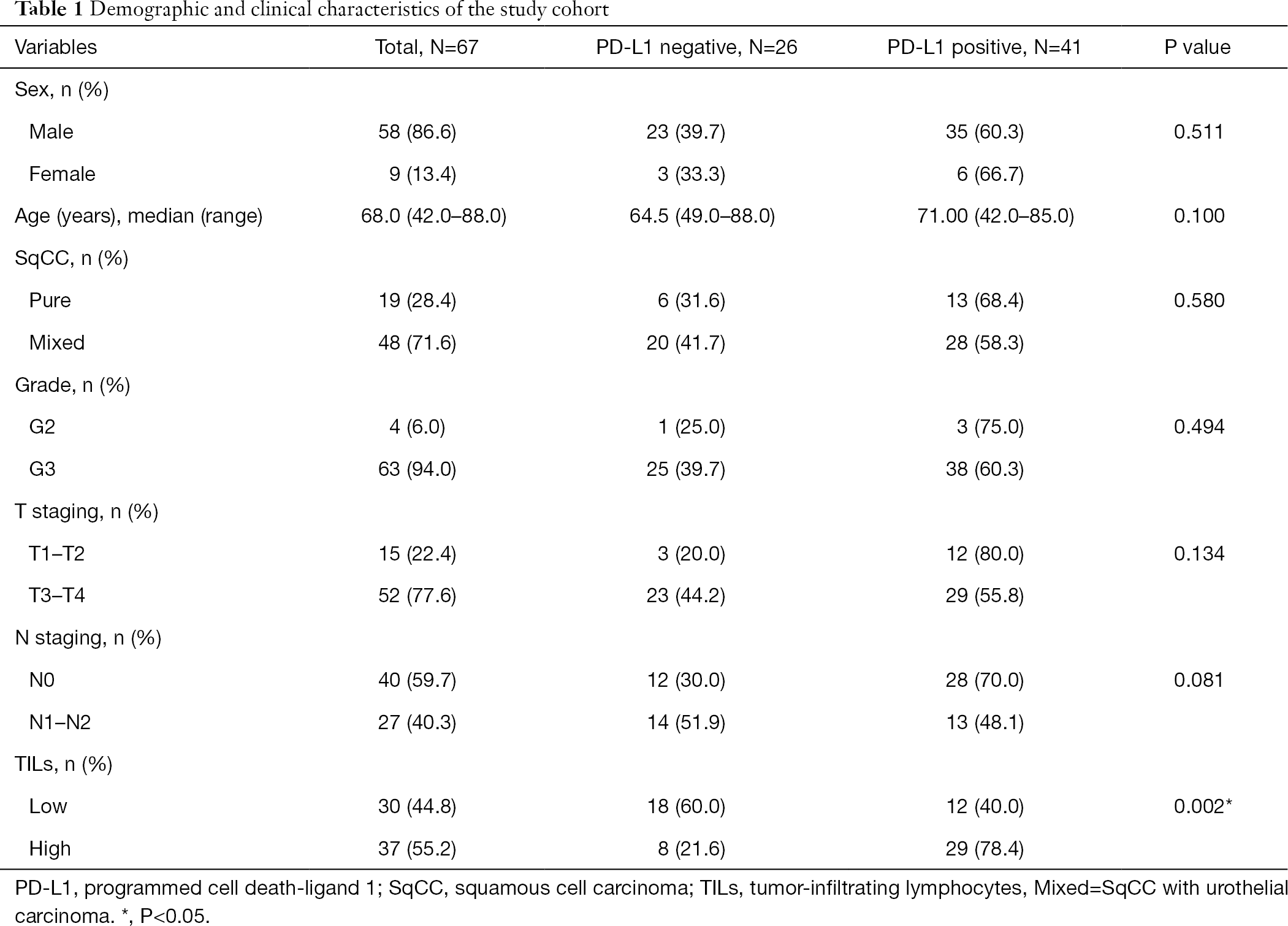 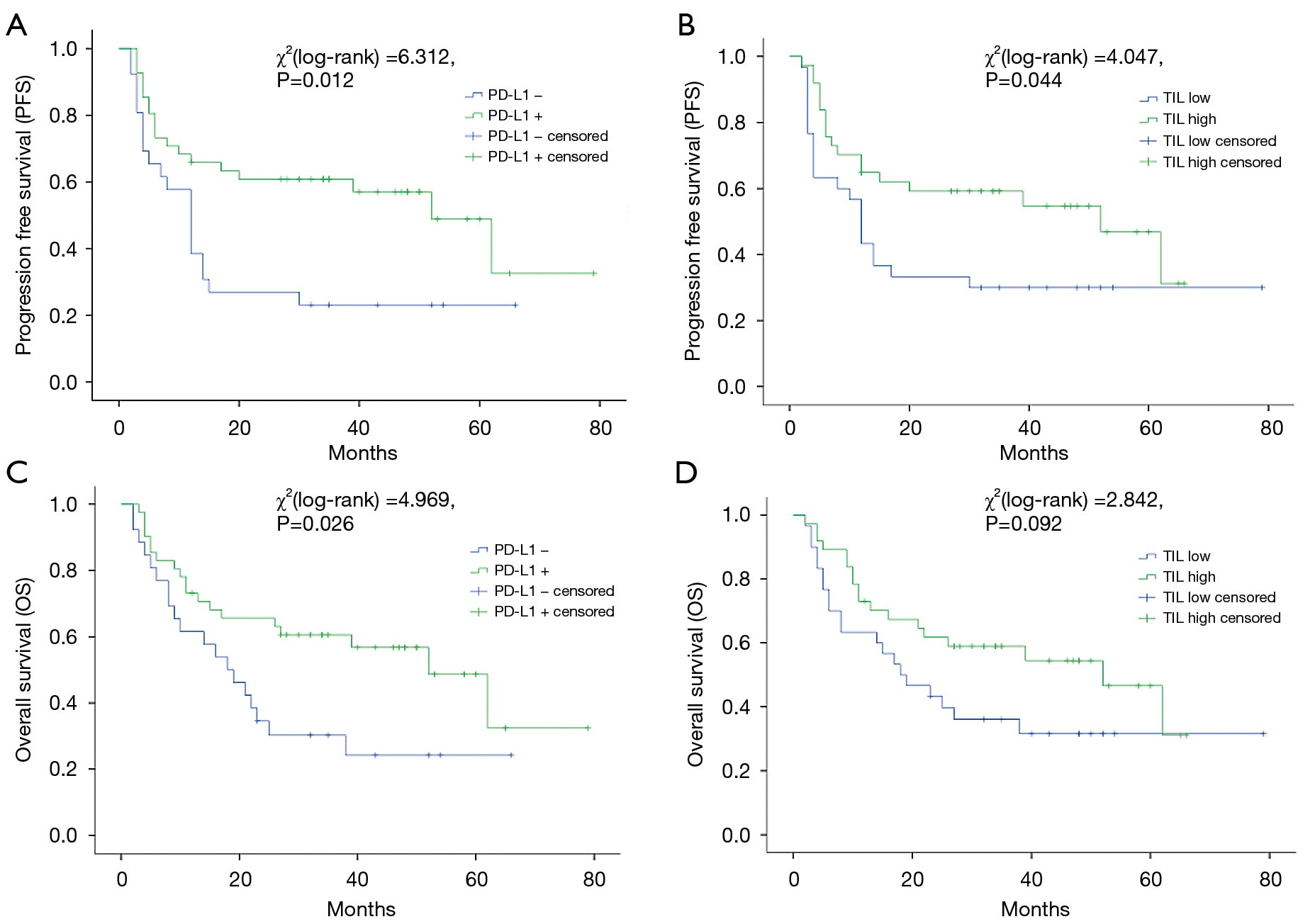 Figure 3 The influence of the PD-L1 expression on survival outcomes in combination with the density of tumor-infiltrating lymphocytes (TILs): Kaplan-Meier curves of the (A) progression-free survival (PFS) and (B) overall survival (OS) for the whole study cohort. 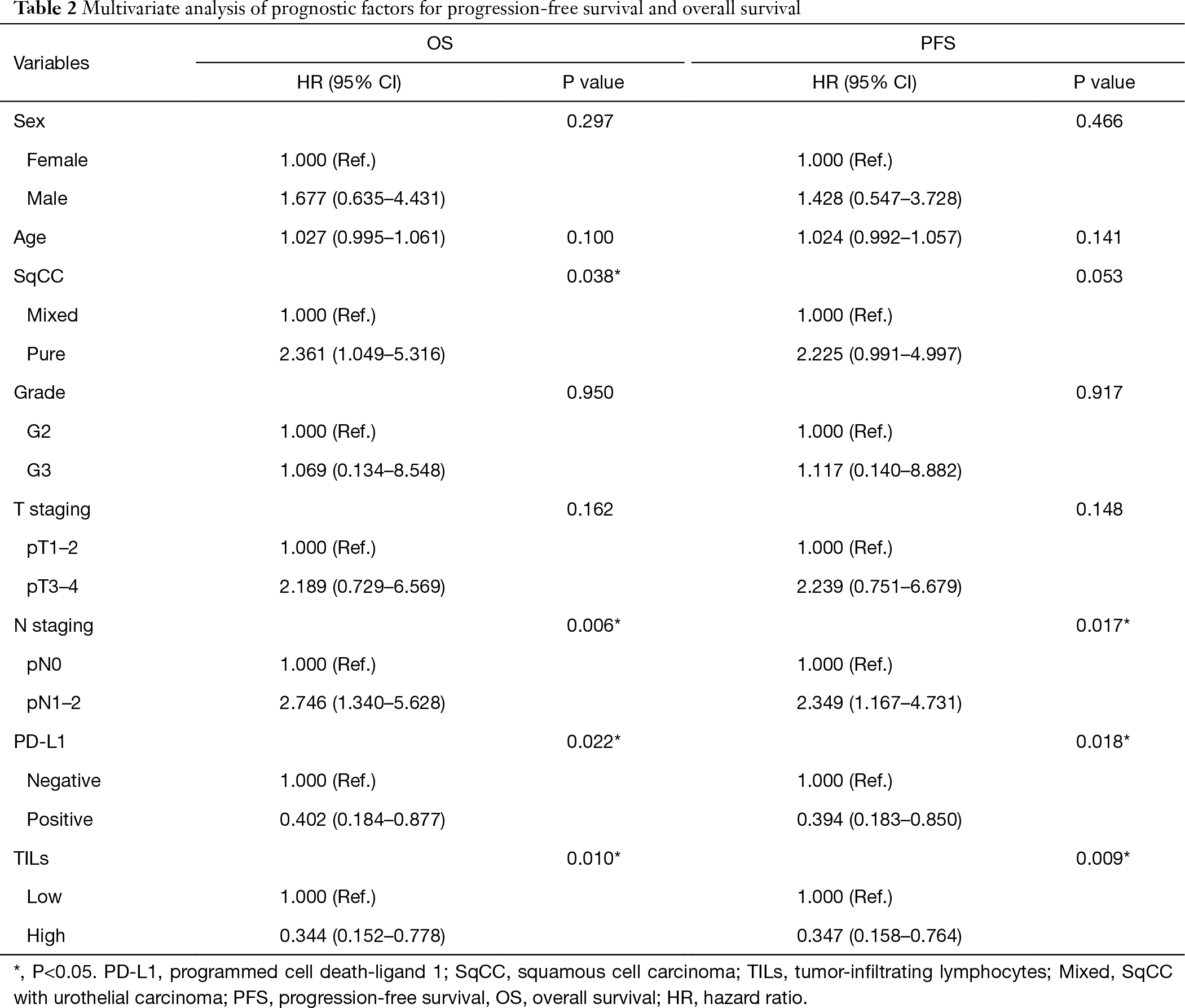 Non-schistosoma associated urinary bladder SqCC is of low incidence with poor long-term survival outcomes (3-5). Different from other carcinomas, non-schistosoma associated urinary bladder SqCC is more frequent in patients with chronic inflammation, urinary tract calculi or chronic bladder outlet obstruction (22). In other organs’ SqCC, like cervical SqCC, pulmonary SqCC as well as penile SqCC, the positive PD-L1 expression was reported to be higher compared with other subtypes of carcinomas (e.g., PD-L1 expression in lung cancer: SqCC is 52%, whereas adenocarcinoma is 17%) (18,23-25).

To the best of our knowledge, this is the first study to report the expression as well as prognostic significance of PD-L1 and the tumor microenvironment in non-schistosoma-associated urinary bladder SqCC. The expression of PD-L1 with a 1% or 5% cut-off for positivity has been investigated in bladder cancer (26). The incidence of PD-L1 expression in post-cystectomy specimens of urothelial carcinomas was reported to be approximately 15–35% (11,19,26). The expression of PD-L1 in mBUC may be related to response to immunotherapy (14). Previous studies have shown that PD-L1 is highly expressed in bladder SqCC. However, their results are limited because of small sample sizes [17 cases in Udager et al. (3)] or less representative as to schistosomiasis-associated SqCC [Owyong et al. (12)]. Therefore, it is important to study the expression of PD-L1 in non-schistosoma-associated bladder SqCC, which could also provide important information for subsequent immunotherapy studies. In our study, 41 out of 67 (61.2%) patients with urinary bladder SqCC had PD-L1 expression. Therefore, there appears to be a vital difference between PD-L1 expression in the major histological subtype of bladder cancer and bladder SqCC. The following reasons may explain that huge diversity. Bladder cancer is usually molecularly heterogeneous, particularly in the basal-squamous subtype (27). Nowadays, there is a tendency to view SqCC as a phenotype (the basal-squamous subtype) with common characteristics, namely, the expression of basal and stem-like markers (CD44, KRT5, KRT6A, KRT14) and SqCC markers (TGM1, DSC3, PI3), less frequent polysomy and genetic alterations and more frequent loss of chromosome 3p (2). What’s more, non-schistosoma associated bladder SqCC is more closely associated with chronic inflammation than other histological subtypes (6,7,12), and might cause a general inflammatory response (28-30) as well as adaptive immune resistance with PD-L1 upregulation. Further, more studies at the molecular level are imperative.

Our results demonstrated that PD-L1 expression as well as high density of TILs were associated with better survival outcomes in non-schistosoma associated urinary bladder SqCC. This was consistent with Owyong et al.’s finding that PD-L1 expression was a favorable prognostic factor (in majority schistosomiasis associated bladder SqCC) (12). The balance of the host’s immune response and negative feedback inhibition could dominate outcome (35). The expression of PD-L1 in tumor microenvironment might reflect the presence of antigen-induced anti-tumor immune pressure mediated by TILs, and TILs recruited to the tumor microenvironment could still induce a partial anti-tumor effect (8,36). Therefore, PD-L1 positivity may signify tumors that have elicited an immune response, and are more likely to associate with better survival (37).

Our results suggest that bladder SqCC should be included in clinical trials to further observe whether survival benefits can be obtained. Our study has some limitations. As a retrospective study from a single medical center, selection bias was inevitable. Our findings need to be confirmed with larger samples and multi-center studies in the future.

We are grateful to all relevant physicians of Peking University First Hospital for allowing us to include their patients. The experimental data at the initial stage was reported in the International Conference on 33rd Annual European Association of Urology (EAU) Congress (Copenhagen, 16–20 March 2018).

Conflicts of Interest: All authors have completed the ICMJE uniform disclosure form (available at http://dx.doi.org/10.21037/tau.2020.02.12). The authors have no conflicts of interest to declare.

Ethical Statement: The authors are accountable for all aspects of the work in ensuring that questions related to the accuracy or integrity of any part of the work are appropriately investigated and resolved. This study was approved by the institutional ethics committee of Peking University First Hospital {approval number: 2016[1037]}. Because it was a retrospective analysis of routine data, a waiver of wrote informed consent was granted from the ethics committee. Patient records or information were anonymous and de-identified prior to analysis.