Worldwide trends in penile implantation surgery: data from over 63,000 implants

Penile prostheses remain the gold standard of treatment for severe or medically refractory erectile dysfunction (ED). Reliable, on-demand erections, along with an ever-improving mechanical lifespan has led to high satisfaction rates (1-5). There have been numerous advances in the field of penile prosthetics, with the first three-piece inflatable device being introduced in 1973 (6).

The last decade has brought several advances in penile prosthesis design and technique. Enhancements in reservoir design, cylinder characteristics, and the widespread use of infection retardant coatings have made devices safer for patients and possibly easier for implanters to place (7,8). Despite these advances, only a small percentage of men who would benefit from penile prostheses elect to undergo surgery (9). While a wide variety of both patient and physician factors may influence worldwide trends in prosthesis implantation, these trends and significant factors are largely uncharacterized.

In this study, we use two large databases to review modern trends of global penile prosthesis usage in regard to geography, patient age, surgical approach, implanter volume, and etiology of ED.

Databases reviewed contain de-identified data from the patient information form (PIF) that is typically) completed by representatives from American Medical Systems (AMS; Minnetonka, Minnesota) and Coloplast Surgical Urology (Coloplast Inc., Minneapolis, MN) at the time of prosthesis implantation. Occasionally the physician or operating room staff completes the form. Data for AMS was collected from January 1, 2006 to December 31, 2012, and for Coloplast from January 1, 2005 to December 31, 2012. The AMS database included only the 700 series inflatable device, while Coloplast data includes both malleable and inflatable devices. The PIFs include patient demographics and age, as well as place of implantation, surgical approach, etiology of ED (more than one may be selected) and device information. As with all of the information on the PIF, etiology of ED was determined by the physician performing the procedure. He or she was not limited in the number of diagnoses that could be selected. The ED etiology could only be categorized as “with” the diagnosis (selected on PIF) or “without” the diagnosis (not selected on PIF).

Worldwide, penile implant surgery increased annually by an average of 8.1% between 2006 and the end of 2010. The largest single year increase was 10.1% between the years of 2008 and 2009. A total of 39,430 implants were recorded by AMS during the study years and 23,583 by Coloplast. Figure 1 shows the yearly trends of implantation for these companies. 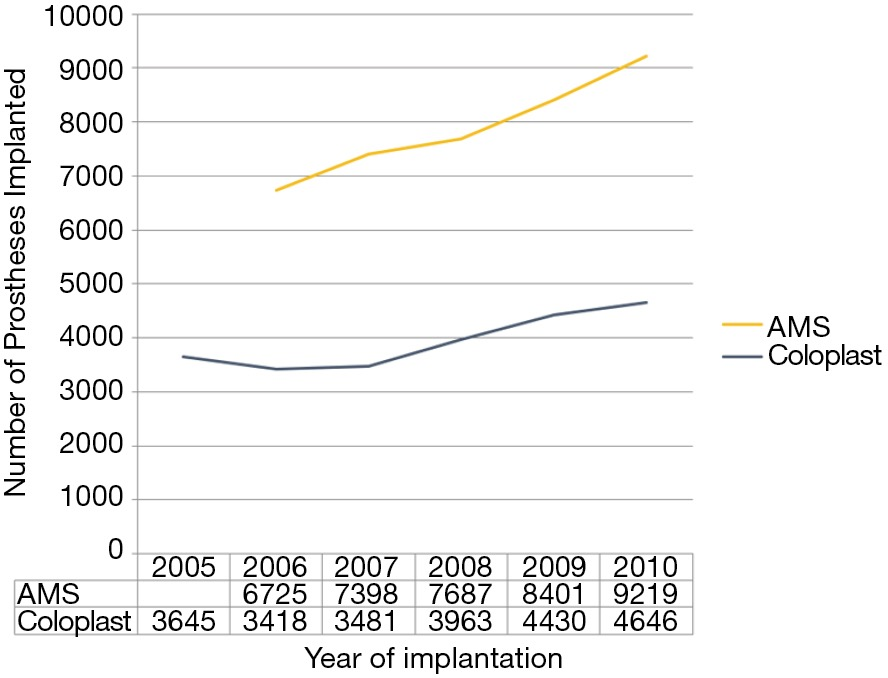 Database information indicates the highest surgical volume for AMS penile implants occurred in the US, which accounted for 85.9% of worldwide implants during that time (Figure 2). Germany contributed the second most implants with 2.3% followed, in order, by the United Kingdom (2.1%), Italy (2.0%), Spain (1.7%), Canada (1.6%), South Korea (1.5%), and Belgium/Holland (1.3%) (Table 1). At least 500 AMS implants were performed in each of these countries, while the remainder of the regions listed in Table 1 performed less than 500 AMS implants. The country with the largest increase during the study period was Australia (over 3,000% increase, data not shown). A total of 1,170 implants were placed in countries with implant volumes less than 100 for the time period of the study. This data was grouped under “other.” Coloplast data was able to be differentiated by the US state of implantation. New York (16.0%), Florida (15.0%), California (9.3%), Louisiana (5.1%), Alabama (4.8%), Pennsylvania (4.0%), Texas (3.4%), North Carolina (3.4%) and Illinois (3.2%) each performed more than 3% of the total Coloplast implants in the United States. 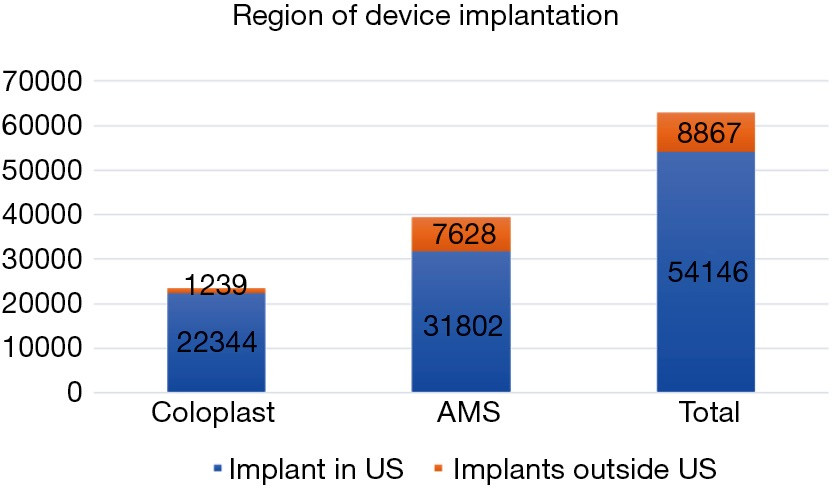 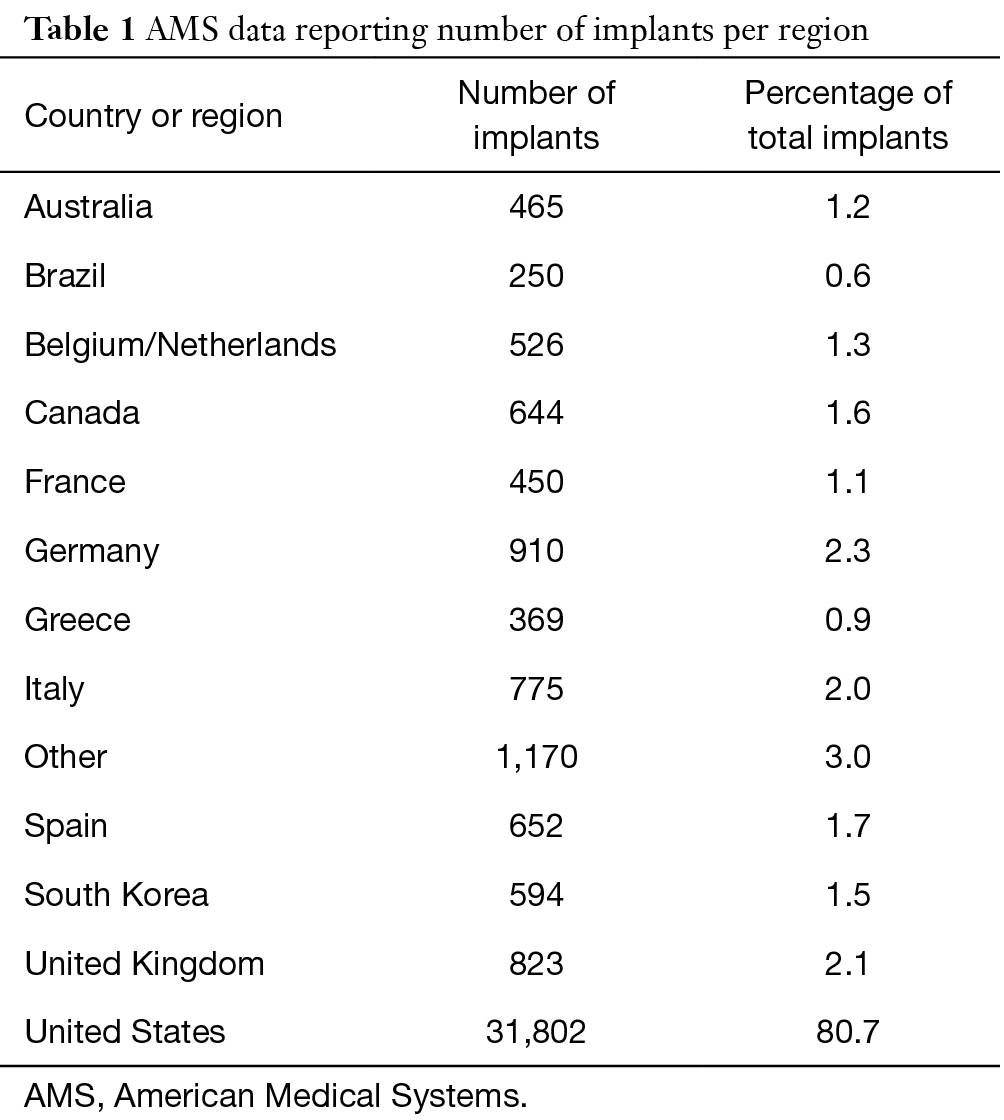 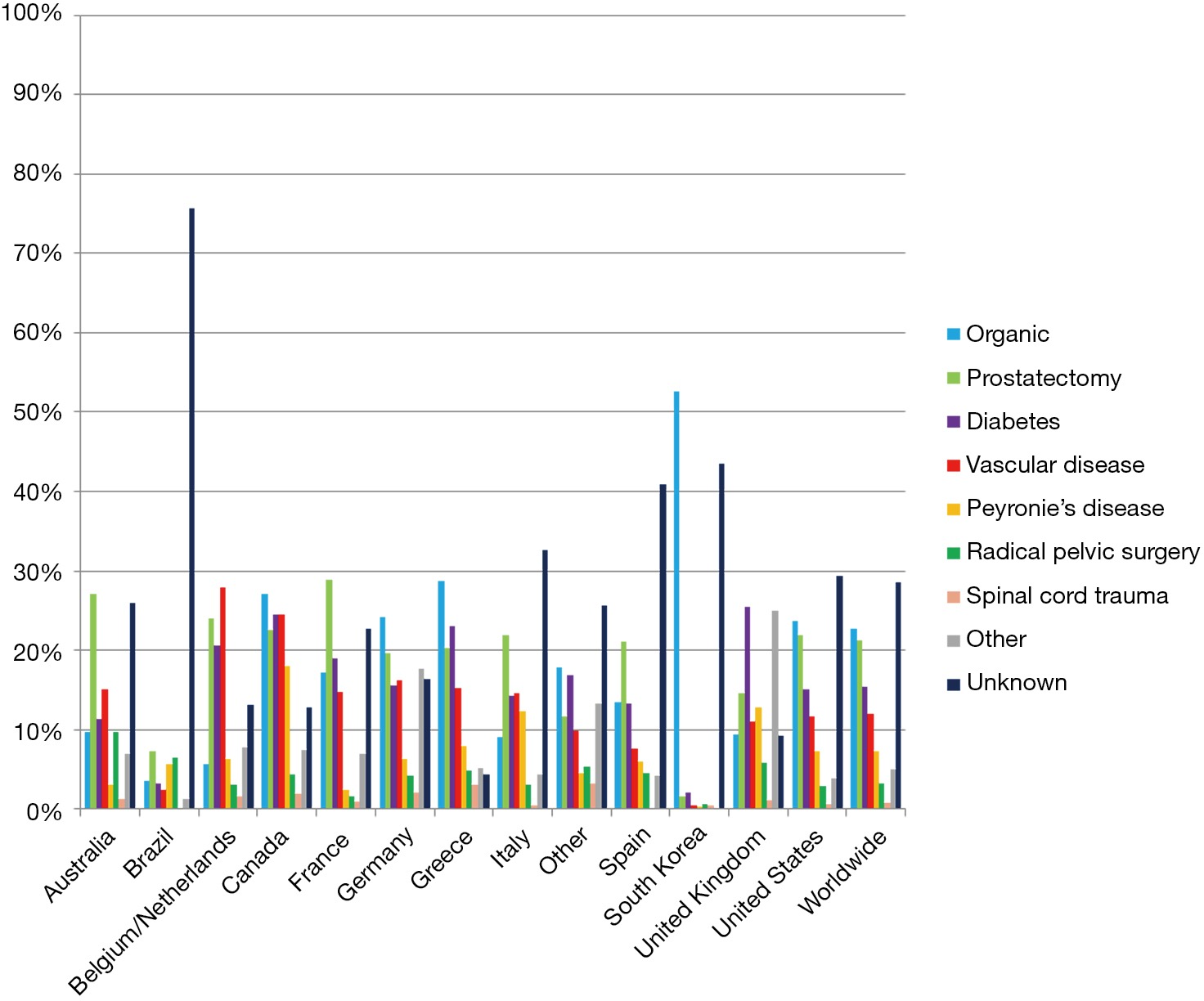 Categorization of surgical approach to implantation indicated implants were placed via a penoscrotal (PS) approach 4.2 times as often as via an infrapubic (INF)incision—a statistic that was similar for implanters both inside and outside the US. Again, some interesting geographic variations were observed with the majority of cases in Belgium/Netherlands being performed via INF incision (65%) (Figure 4). In only 6 US states were more Coloplast prostheses placed through an INF approach than through a PS incision (Alabama, Florida, Indiana, Montana, Virginia and Wyoming). Figure 5 depicts the proportionality of INF versus PS approach. A PS predominance can be seen with this technique accounting for 60–78% of cases from 2005 to 2012. 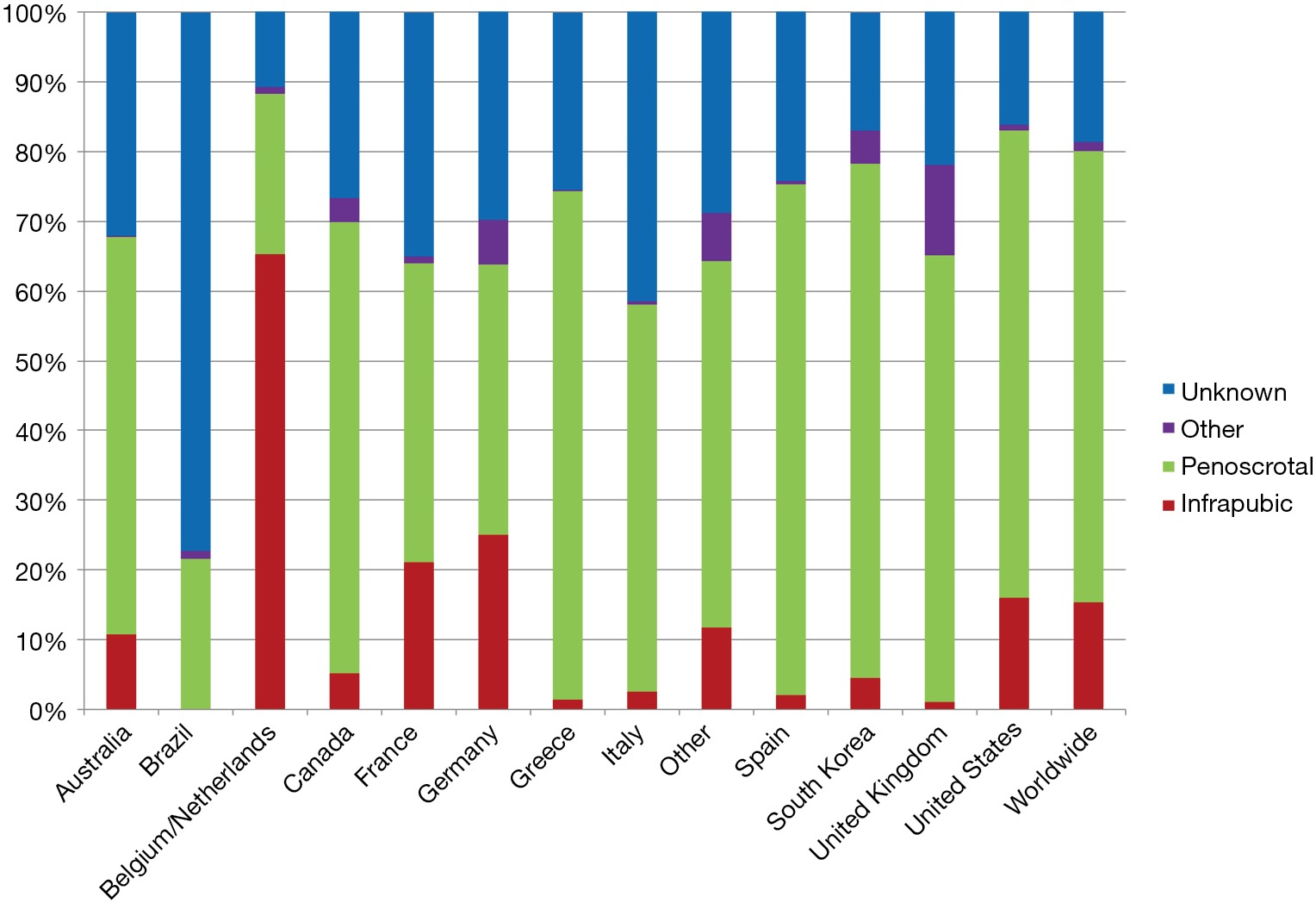 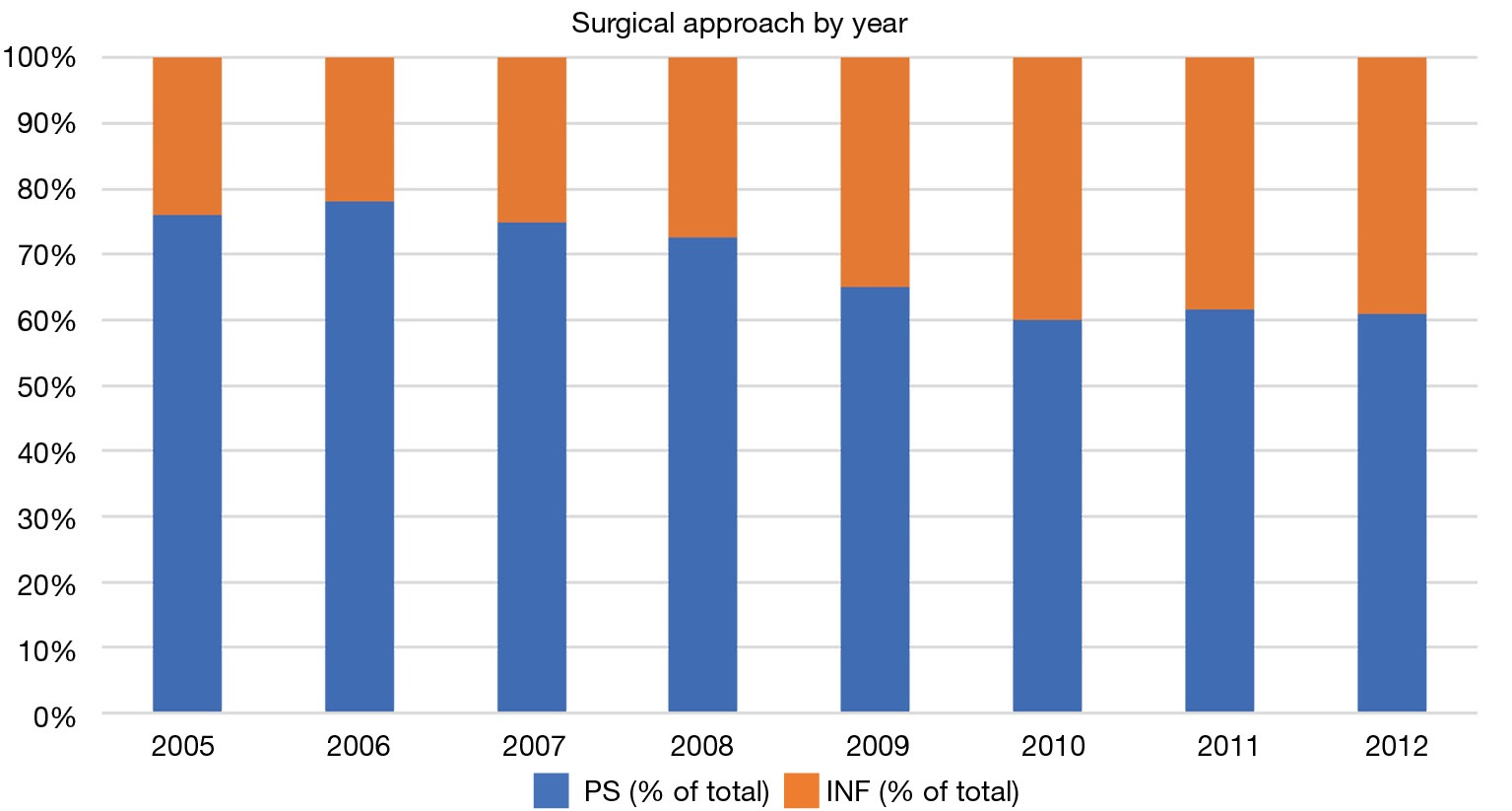 Table 2 provides a look at the percent change of the number of Coloplast implants done per year by physicians inside versus outside the United States from 2005 through 2012. Quite notable is the lack of high-volume implanters outside of the United States beginning in 2005. There were no calculable or observable percent change in all categories greater than 16 implants per year. In contrast, the United States data shows growth in large volume implanters during the years of the study. There were quite notable increases in physicians accomplishing 16–30 (46.7%), 31–50 (66.7%), and greater than 100 (300%) implants per year.

Notably, from this large data collection, a global snapshot of the international trends in penile implantation over the last decade is illuminated. Over the 7-year period of 2005–2012, we have data points for 63,013 penile implantations that occurred. Remarkably, the vast majority (85.9%) of penile implants were done in the United States. From the AMS data, Germany and the United Kingdom were the next two highest implanting countries, but with drastically smaller numbers than the United States. Germany accounts for 2.3% and UK for 2.1% of worldwide implants. In general, only moderate increases were noted in most countries. Australia had a surprising adoption of implantation, and subsequently experienced an increase of over 3,000% during the study period. Within the United States, nine states (New York, Florida, California, Louisiana, Alabama, Pennsylvania, Texas, North Carolina, and Illinois) accounted for 60.8% of the Coloplast implants done nationally.

Interesting geographic variation is noted in the data with reported surgical approaches often varying impressively between countries. Figure 5 demonstrates the predominance of the PS approach, accounting for 60–78% percent of the approaches done over the study period. There does not appear to be a predictive pattern of surgical approach. It appears fluid in nature over the course of the study period. However, Belgium/Netherlands performed 65% of implants via the INF approach, while all other countries had a penoscotal preponderance (Figure 4). The reason for this INF predominance in the Netherlands is unknown; however, it certainly seems feasible that in countries with a relatively low number of implants, the practice patterns of a higher volume implanter may be quite likely to influence the overall results. Additionally, the reliability of the company representatives in a region, as well as their accuracy and completeness of the PIF may influence how the data is interpreted from that region.

While there has apparently been little growth in high volume implanters outside of the United States, the implant business domestically has blossomed. In terms of implanters within the United States, a rather large increase was seen in the 16–30, 31–50, and >100 implant per year categories. The highest volume category might be deceiving; the 300% increase in the >100 category likely indicates an increase from one physician to three who are extremely high volume, although that cannot be proven from the data. The 46.7% and 66.7% increases seen in the 16–30 and 31–50 categories, respectively, likely correlate with a corresponding 6.5% and 8.3% decreases seen in the 1–5 and 6–15 categories. This would represent low volume implanters increasing the number of implants they perform yearly by additional focus on this subspecialty of prosthetic urology. This could also be secondary to the steady increase in the overall number of implants done yearly over our study period.

Perhaps the increase in the 16–30 and 31–50 categories reflects the growing number of graduating residents who have had more experience with IPPs than their predecessors, and are likely performing more implants once in practice than previous graduates. Past studies have looked into implant practice patterns with varying methodologies. Oberlin et al. recently found that 75% of IPPs in the United States were done by urologist who perform 4 or fewer implant operations yearly, whereas “high volume surgeons” (>50 per year) performed 16% of implants despite accounting for <1% of the urologists studied (10).

Etiology of erectile function was found to vary across regions as well (Figure 3). In the United States, “organic” causes, prostatectomy, and diabetes accounted for the large majority of reported etiologies of ED. A large predominance of “organic” causes was found in South Korea (52%) compared to other countries that report a larger percent of post-prostatectomy patients such as Australia with 27% and France with 29%. Interpreting this data is quite difficult because of the vague descriptor of “organic” ED. Organic erectile dysfunction could represent a wide spectrum of ED including diabetes, vascular disease, hypogonadism, or a combination of a variety of factors. With that being said, the etiologies of ED in our study correlate to those found in the recent PROPPER study. Using an implant database, the PROPPER study found the most common etiologies of ED resulting in IPP placement were radical prostatectomy (28%), diabetes (21.6%), cardiovascular disease (19.6%), and Peyronie’s disease (8.9%) (11). It is unclear how patient age played into the etiology of erectile function seen in this study.

Limitations of this study primarily relate to issues surrounding the PIF. As we used information from PIFs completed by company representatives and others to generate these databases, data from surgeries where no PIF was attained could not be included. Additionally, forms that were incompletely or erroneously filled out may influence captured data.

Penile implantation is an increasing practice, as evidenced by a steady increase in the number of implants done over a 7-year study period. Acceptance of this treatment option for ED appears to be somewhat variable by country with the US leading the number of implantations placed yearly by a very wide margin. Worldwide, most surgeons perform the surgery via the PS approach.

Conflicts of Interest: Dr. Köhler is a consultant for both Coloplast and Boston Scientific. The other authors have no conflicts of interest to declare.