While post-traumatic, arteriogenic ED is discussed in the literature, there is currently no established standard management for this condition. Management instead depends upon physician experience and preference. We present a 14-year-old adolescent who was diagnosed with a cavernosal artery pseudoaneurysm secondary to blunt perineal and pelvic trauma. He was successfully managed by vascular interventional radiology (VIR) with superselective microcoil embolization. We also review the current literature regarding the management techniques of post-traumatic, arteriogenic ED.

A 14-year-old boy presented to the Urology clinic with a 2-month history of ED related to a blunt force straddle injury in which his urethra was damaged. The patient had been using a suprapubic catheter since the injury and was scheduled for reconstructive urethroplasty. Erectile function at the time of presentation was reported by the patient to be sufficient for penetration but insufficient for maintenance until orgasm. Penile duplex ultrasound after 5U Trimix and 80% erection demonstrated a right-sided corporal pseudoaneurysm with bilateral peak systolic volumes of 9 cm/sec on right and 27 cm/sec on left, and end-diastolic volumes of 2 and 4 cm/sec on the right and left respectively. It was determined at this time that the pseudoaneurysm had a reasonable likelihood of resolving spontaneously and it was safe to proceed with reconstructive surgery as planned. About 10 months after urethroplasty and removal of the suprapubic catheter, the patient was able to attain 50% erection not sufficient for penetration. Referral to interventional radiology was made at this time. Repeat duplex ultrasound revealed that the right-sided corporal pseudoaneurysm had not spontaneously closed. 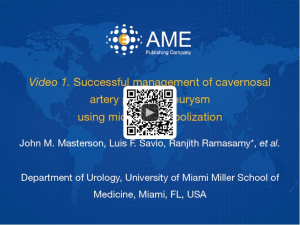 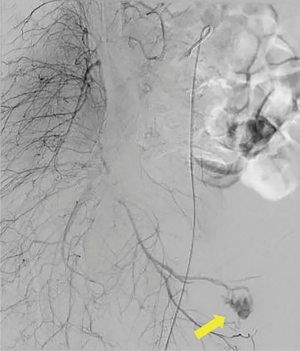 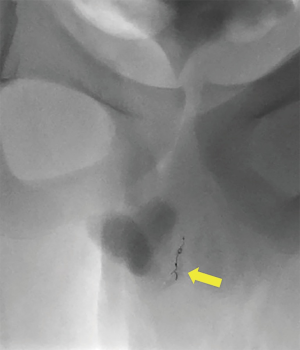 Figure 3 Deployment of the microcoil (arrow, the deployed microcoil). 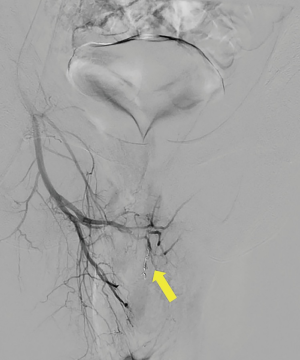 We present a 14-year-old adolescent who was diagnosed with a cavernosal artery pseudoaneurysm secondary to blunt perineal and pelvic trauma who was successfully managed with superselective microcoil embolization. Post-traumatic, arteriogenic ED is typically caused by blunt force trauma to the perineum or incidental trauma sustained during a urologic procedure resulting in arteriovenous fistulae (AVF) or pseudoaneurysm (3). The management of post-traumatic, arteriogenic ED with superselective embolization is well described in the literature. However, there is no consensus regarding the best materials to be used (7). We believe that microcoil and Gelfoam are the preferred techniques for embolization of these defects given their similar outcomes, however choosing between them is a matter of physician preference.

Doppler ultrasound (US) has an important role in the management of post-traumatic arteriogenic ED. Doppler US is used to establish the relationship of ED to trauma as well as to categorize arteriogenic ED based on the pattern of blood flow (8). After embolization of pseudoaneurysms and AVFs, Doppler US is also used to evaluate the cessation of flow through embolized lesions. Doppler US findings vary depending on the type of lesion causing arteriogenic ED, therefore it is important to be able to recognize these findings (3). It should be noted however that diagnosis of arteriogenic ED should be confirmed by penile arteriography (8).

What can be appreciated is that with all embolization techniques chosen, outcomes are very similar. Erectile function at follow-up returned to normal in all reports—unfortunately results may be biased because negative outcomes are rarely reported. Previous studies have estimated preservation of erectile function after angiographic embolization to be 80% at long term follow-up (8). What can also be appreciated from the literature is an overall trend in recent years towards the use microcoil for pseudoaneurysms and AVFs, likely due to their versatility. Microcoil fibers elicit a thrombogenic response, causing superimposed thrombosis and vessel occlusion. Coils also range in diameter from submillimeter to several centimeters, and include configurations such as straight, helical, spiral, and various three-dimensional shapes, making them a uniquely versatile option. Gelfoam is also a commonly used material for embolization of cavernosal artery. Gelfoam is available a sponge or a powder. The sponge form is typically used for large vessel embolization, as in the case of arteriogenic ED. Vessels embolized with Gelfoam recanalize over the ensuing weeks to months, however, this recanalization can be unpredictable. Autologous clot is also used in the setting of large vessel embolization but clots tend to lyse too quickly for effective treatment (23,24). Given the similar outcomes observed between microcoil and Gelfoam, it can therefore be concluded that both options are equally valid. Our study is limited by having a case report with short follow-up following embolization of cavernosal artery.

Trauma is the most common cause of ED in men under the age of 40. Arteriogenic ED resulting from the formation of pseudoaneurysm or AVF is a typical presentation of post-traumatic ED. We presented the case of a 14-year-old adolescent diagnosed with a pseudoaneurysm causing arteriogenic ED secondary to blunt force trauma to the perineum. We conclude through successful management of this case that superselective embolization is a safe and effective treatment modality for pseudoaneurysm causing arteriogenic ED. We conclude through a review of the literature that the use of microcoil and Gelfoam as the embolizing technique yield similar outcomes. We believe that it is important for urologists to be familiar with the various VIR treatment techniques in order to properly manage post-traumatic arteriogenic ED.

Informed Consent: Written informed consent was obtained from the patient for publication of this report and any accompanying images.