Penile cancer is a rare malignancy. It has been estimated to affect 26,000 men globally every year. The incidence appears to be particularly higher in the developing countries; however regions with religious practices that exercise neonatal circumcision appear to experience lower incidence rates (1). Incidence rates of penile cancer in the UK was estimated at 0.1/100,000 (man-years), with approximately half of these cases attributed to human papilloma virus (HPV). The histology behind penile cancer is commonly squamous cell carcinoma (SCC) 95%, which is highly associated with HPV 16/18 (2).

What is Non-invasive penile cancer?

Penile cancer is staged via the current 7th edition AJCC TNM staging system (Table 1) (3). To improve the accuracy of staging, a complete resection of the site insuring negative surgical margins is preferable to a biopsy. Several factors are taken into account with staging, determining whether the cancer is invasive, or non-invasive. Once it has been classified, the appropriate treatment options can be explored. A non-invasive cancer constitutes as a carcinoma in situ (CIS), which has not invaded the sub-epithelial connective tissue and has not spread to the lymphovascular system (4). 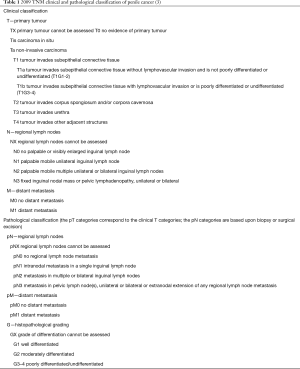 In recent years there has been a change of terminology used in the histopathological classification of premalignant penile lesions. In order to better understand the management of these lesions it is essential to be clear about these changes. 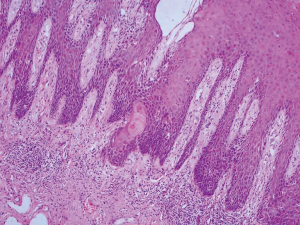 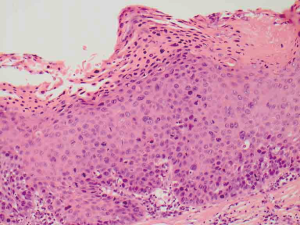 PeIN typically presents as a solitary lesion on the penis, and usually presents in men over the age of 35, with a peak incidence of 60–70 years. According to the British Association for Sexual Health and HIV (BASHH) guidelines any suspicious persistent or atypical penile lesions should be managed with a full anogenital examination followed with a biopsy to confirm the diagnosis and exclude invasive malignancy (8). When assessing the penis by clinical examination, we recommend using a swab soaked with 5% acetic acid on the genital skin. After a few minutes abnormal epithelium demonstrates an “aceto-white” reaction. Although not specific for premalignant changes, Wikström et al. identified 20% of men with aceto-positive reaction as having PeIN (9).

Currently European Association of Urology (EAU)© guidelines suggest non-invasive penile malignancy can be managed with topical treatments such as Imiquimod (IQ) or 5-FU. Although, other options have been suggested such as total or partial glans resurfacing which have shown up to 20% of patients had superficial invasive disease (3). The aim of this review will be to update readers on the topical treatment options specifically with regards to their efficacy and toxicity.

The two main topical treatments for non-invasive penile cancer are 5-fluorouracil (5-FU) and IQ. The next section provides the up to data evidence of their efficacy as well as their toxicity. The EAU© guidelines report that for CIS, up to 57% of patients reported a complete response with a low number of adverse events (3).

5 Fluoro Uracil exerts its chemotherapeutic effects through inhibition of the enzyme thymidylate synthetase (10). The antimetabolite effects occur through increased uptake in rapidly dividing cancer cells. 5-FU was first recognised in the 1960s as a treatment for Actinic Keratosis. As this became a widely practiced way of topical and effective management it was trialed in other topical low grade cancers, in particular penile cancer (11). Penile tissue is suited to topical 5-FU treatment as recurrence from secondary progression of bowenoid areas from hair follicles is common (12). This is a significant step as tissue preservation in penile cancer is very important for psychological and sexual preserving reasons. 5-FU is a topical agent and it is well tolerated by patients. Close follow up is of particular importance in topical therapies for cancers. If the initial course of topical 5-FU fails, then this treatment is not usually repeated (3).

One of the first studies assessing 5-FU in less aggressive superficial penile cancer showed in the group of patients treated with 5FU the post treatment biopsies were normal, with a 70-month follow up (13). Even though this study had a small treatment group (n=7), there was a significant treatment effect. These findings were also replicated in a small study (n=3), patients were recurrence free from a follow up time of between 20–60 months (14). These findings have been shown in further studies on larger scales. In a retrospective study of 86 patients with penile CIS, followed over a 10-year period showed that topical 5-FU had a 50% complete response compared to 44% in IQ. Thirty-one percent of patients treated with 5-FU had a partial response, while IQ had 56% non-response (15). These are the two main stay topical therapies in superficial penile cancers. Although the numbers in the study are small, there is a notable difference between 5-FU and IQ. It is challenging to come to a firm conclusion as there is limited evidence available and moreover existing data has small numbers and are not randomised controlled trials. As there is a limited evidence base in topical treatment for superficial less aggressive penile cancer it is beneficial to see that topical therapies have a substantial effect. Moreover with close surveillance of the patients detrimental effects of the disease progression can be curtailed.

IQ is an immuno-modulating drug which acts on several levels of the adaptive immune system. It activates the cells of this aspect of the immune system through toll like receptor 7 (TLR-7) causing secretion of cytokines such as interferon alpha, interleukin 6 (IL-6) and tumour necrosis factor alpha. The treatment is usually given for 5 days a week for a period of 4 to 6 weeks. The evidence for the use of topical IQ in PeIN is very heterogenous with most data coming from small case series and case reports. There has been more extensive use of IQ in extra genital CIS. A recent review picked up a total of 29 articles (22 case reports and 7 small case series) where IQ was used in the treatment of PeIN. In total this amounts to 48 patients, this is the largest aggregated number of patients in a review of IQ treatment to date. The majority of patients present with the clinical entity erythroplasia of query at (n=32), the remaining present with Bowen’s disease (n=8) or bowenoid papulosis (n=8). The small studies included in this review are quite heterogenous; the duration of treatment, frequency of application etc. is very variable. This makes drawing firm conclusions about the efficacy of topical IQ difficult. From the data we have, 30 out of 48 patients demonstrated a complete response (62.5%), 4 patients (8%) had a partial response and 14 patients (29%) no response. Treatment given less than 4 times weekly appears to give a longer duration of complete response (81% complete response), although, inevitably the treatment regime lasts longer (mean duration 113 days). This compares with a 68% complete response in those patients receiving treatment greater than 4 times weekly (mean duration 53 days) (16).

Toxicity data for the use of topical IQ is reported in extra genital disease. The most common adverse effect is local skin irritation at the application site. Other adverse effects include headache, flu like symptoms and myalgia. In our experience of a small number of patients treated with topical IQ for PeIN it is well tolerated. There is no evidence to suggest that any patients have ceased treatment due to toxicity.

In our tertiary referral center those patients who relapse following topical chemotherapy for the treatment of their non invasive penile cancer are offered surgery. This is either in the form of partial or total glans resurfacing, this has been shown to identify 20% of patients with underlying invasion. Other treatments such as photodynamic therapy (PDT), laser ablation and Mohs micrographic surgery are also used. The disadvantage of PDT and laser ablation are the lack of histological tissue for analysis. Evidence for these treatments once again is rather heterogeneous with small study populations. Filonenko et al. treated 10 patients over a 2-year period with PDT and achieved complete response in 9 patients (17). The follow up period was short and this illustrates the difficulties in demonstrating durability of this treatment. PDT was used to treat 7 out of 10 patients successfully with a mean follow up of 35 months by Paoli’s group in Sweden. Three patients recurred with PeIN but no patient developed invasive cancer (18). Reported toxicity was minor with all patients experiencing a degree of pain, although this was not quantified. In addition superficial erosions were common but reportedly healed in a matter of days (18). Comparative trials of the various treatments available for non invasive penile cancer have not been performed to date.

The management of this rare disease has only been assessed in relatively small trials and no randomized evidence exists to guide best practice. It is clear that in select cases topical chemotherapy can provide an excellent treatment response with minimal long term side effects. Future double blinded randomized trials comparing different these different topical treatment modalities for non invasive penile cancer are essential to provide a more definitive answer as to the anticipated long term outcomes with such therapeutic agents.