DNA fragmentation and the ultimate success of a pregnancy

In this regards, two considerations should be disentangled. First, spermatozoa are not simply carriers of paternal chromosomes, but play a role beyond fertilization. For instance, the spermatozoon transcribes genes critical for early embryonic development, inferring that integrity of sperm genome is essential for a successful gestation. Second, if sperm factors play a role in early embryonic development, are sperm DNA integrity tests useful as diagnostic and prognostic markers, especially in the context of recurrent pregnancy loss (RPL) (3) ?

The concept that sperm quality influences the success of a pregnancy is far from new but still subject of ongoing controversy: In the 1950s, Joel (4) linked RPL in five women to oligozoospermia in the partner, whereas Macleod and Gold (5) observed that semen characteristics were poorer in the partners of subjects with repeated abortions than in those of fertile couples. Then, in the 1960s, Furuhjelm et al. claimed that fathers of children who died in the perinatal period had “a decreased concentration of spermatozoa and an increased percentage of morphologically abnormal cells” in their semen (6). In a controlled investigation, they also showed “a statistically highly significant increase in the percentage of abnormal spermatozoa” in the male partners of women whose pregnancies had ended in a spontaneous miscarriage (7). Contradicting these findings, some twenty years later Homonnai et al. (8) concluded “sperm concentration was significantly higher in the repeated and habitual abortion groups with a tendency to polyzoospermia”.

Explaining, at least in part, these contradictory early results is the notion that RPL is a multifactorial disorder caused by a multitude of factors, including uterine anomalies, hormonal imbalance, autoimmune diseases, thrombophilia, and free radical imbalance (9,10). Consequently, it has become commonplace to classify RPL as either “unexplained” or “idiopathic” miscarriage and, presumably, “explained” recurrent miscarriage. Yet, every diagnostic test currently in clinical practice lacks specificity, meaning that many women with normal pregnancies also test positive. Nevertheless, it remains standard practice to label a “positive” test as “causal”, ignoring the lack of clinical evidence, biological plausibility, or the absence of interventions that are even remotely effective. In addition, most women suffering either repeated implantation failure or multiple miscarriages ‘explained’ or not, will eventually achieve a successful pregnancy irrespective of treatment (11-13). For example, several randomized-controlled trials on RPL, defined here as three consecutive pregnancy losses, reported life-births rate of 65% or more in the placebo group (14,15). The situation is further complicated by the now confirmed observation that preclinical pregnancy loss may exceed 50% (16-18). Indeed, human fecundity rarely exceeds 35% and may be decreasing due to deteriorating semen quality (19).

It is for this reason that male factors may well be important in causing embryonic loss, but, mixed with all other variables, their effect may be masked. Factors that may influence the number, motility and morphological features of spermatozoa include occupation, exposure to environmental toxins and smoking habits (20-22).

In the minds of many practitioners, intracytoplasmic sperm injection (ICSI) (23) renders detailed sperm analysis unnecessary. Yet, already in the nineties it was documented that embryo viability may be compromised when fertilization is achieved using an abnormal spermatozoon (24). Indeed, in 1997, Hamamah et al. (25) demonstrated a relationship between poor semen quality and poor embryonic development; and reported an increased incidence of abnormal sperm morphology in couples suffering from RPL. It has been shown that successful fertilization in humans requires centrosome restoration and microtubule-mediated motility and that the sperm introduces the centrosome (24-26).

Thus, while ICSI has improved dramatically the management of male factor subfertility, careful sperm analysis remains potentially a valid test when investigating persistent reproductive failure. The situation, however, is complex. In 2000, Wennerholm et al. (27) evaluated the outcome of 1,293 clinical pregnancies according to sperm quality. Their results indicate that sperm origin or quality is not associated with preterm birth, although there appears to be a correlation with multiple births. Also, perinatal mortality rates did not differ according to sperm quality. This led to the conclusion that obstetric outcome following ICSI is similar to that of conventional IVF and not influenced by sperm origin or quality. Carrell et al. (28) reported significantly higher aneuploidy rates in the sperm of partners of women with RPL when compared to general or fertile populations (P<0.005). They concluded that, at least in some cases of RPL, partners have a significant increase of abnormal sperm morphology, chromosome aneuploidy or apoptosis. This finding appeared to be supported by a study using in situ hybridization (29).

More recently, an important study by Lin et al. (30) attempted to correlate sperm chromatin structure assay (SCSA) parameters, DNA fragmentation index (DFI) and high DNA stainability (HDS) with the outcomes following IVF and ICSI. No significant differences were found in fertilization rates, the number of good quality embryos and the likelihood of pregnancy between high, moderate, and low DFI or HDS groups. At the same time, men with HDS >15% had significantly increased miscarriage rates following IVF. A similar but non-significant trend was observed in the high DFI group.

Given the conflicting findings, Gil-Villa et al. (31) further investigated sperm characteristics in order to determine the relationship with RPL using standard sperm parameters, lipid peroxidation of sperm plasma membranes, antioxidant capacity of seminal plasma, sperm chromatin integrity and DNA fragmentation tests. Following a full comparison, the investigators reported that RPL is associated with a higher incidence of teratozoospermia. In yet another study, sperm DNA fragmentation in seminal ejaculates in men whose partners had a history of RPL was compared to that of men with proven fertility (32). A significant difference was observed in sperm motility, but not in other parameters. However, the number of sperm with fragmented DNA was significantly increased in the group of men whose partners had RPL. The authors concluded that a higher incidence of DNA damage and poor motility can explain, at least in part, pregnancy loss in their partners.

We have tried to summarize this conflicting evidence in Table 1. 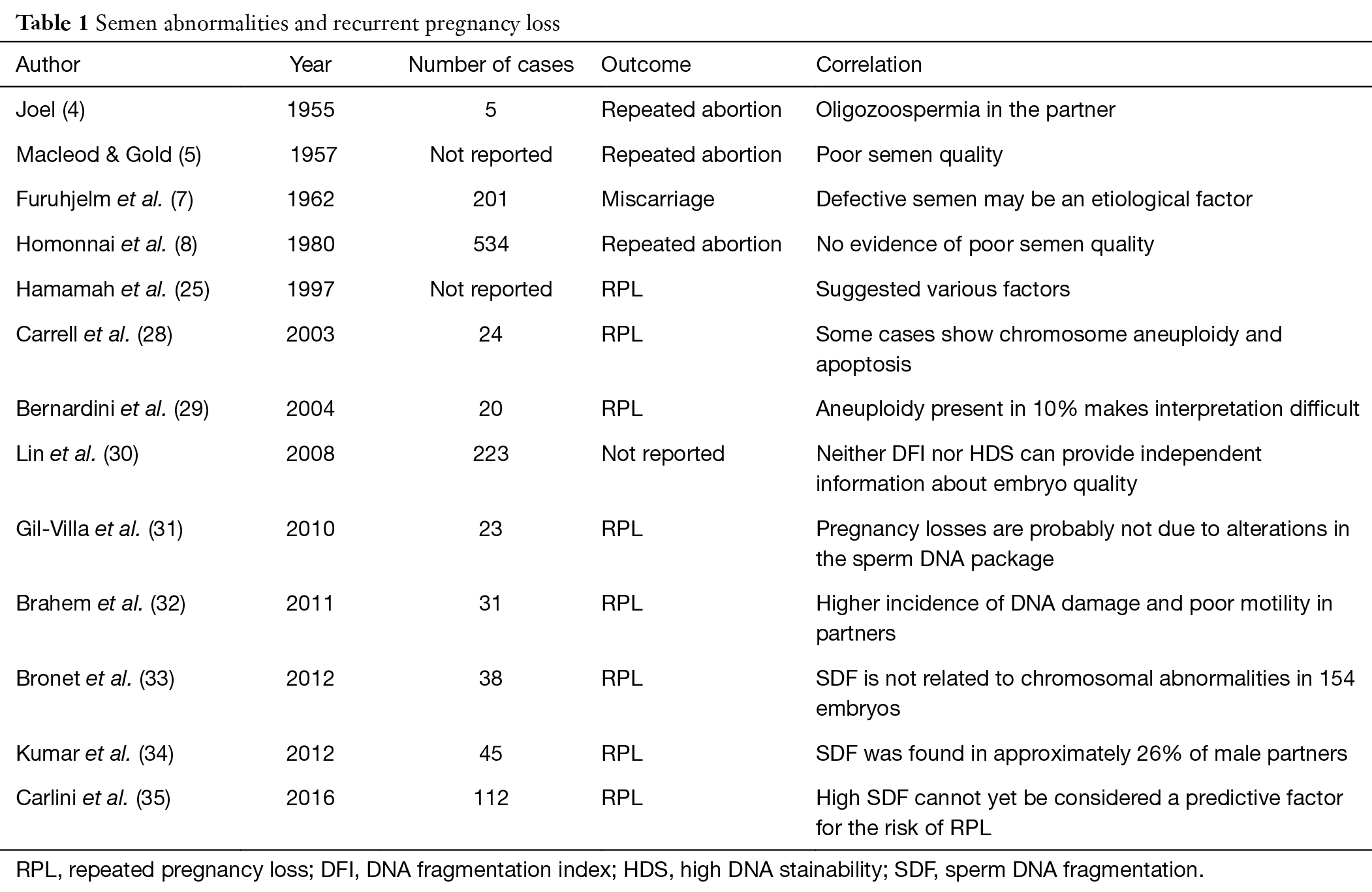 In the absence of unequivocal evidence, the question arises whether these tests are clinically useful in RPL, whether “explained” or not. Kumar et al. (34) applied receiver operating curve (ROC) analysis to semen samples from 45 patients whose spouses had “idiopathic” RPL and 20 normally fertile controls. As DNA damage was higher in RPL couples, the authors concluded that sperm DFI is useful in the management of affected couples. This conclusion appears to be supported by the findings of Carlini et al. (35), who also reported a correlation between increased sperm DNA fragmentation in men from couples reporting two or more spontaneous abortions and impaired reproductive capacity in terms of both rates of fertilization and of pregnancies with viable offspring. Clearly, the information gleaned from small studies needs to be interpreted with care, and large, well-designed prospective studies are urgently needed.

Based on current evidence, the American Society for Reproductive Medicine (ASRM) Selective Practice Guidelines (36) emphasize that the relationship between sperm DFI and miscarriage following IVF or ICSI remains unproven. Therefore, there is no sound clinical basis as yet to recommend inclusion of sperm DNA integrity among routinely mandated tests.

One final technical comment relates to the fact that methods to evaluate chromatin integrity can only measure the percentage of cells with fragmented DNA and are based on the idea that the greater the fragmentation rate, the greater the chance that the sperm population is pathological (37). The problem is that no definite threshold of DNA damage beyond which a seminal sample can be considered pathological has been agreed and different studies provided different information, since stratifying results on the basis of the methodology applied gives different results (38). The majority of investigations reporting a significant impact following either IVF or ICSI, of the level of sperm DNA fragmentation on blastocyst and embryo development and on miscarriage rate, utilized the TUNEL technique. On the contrary, using SCSA variable results have been obtained (39).

In conclusion, presently available sperm chromatin integrity tests represent a useful research tool allowing the study of chromatin structure, as well as of the origin and mechanisms of DNA damage. Implementation in clinical practice, however, is not yet supported because of a lack of robust evidence. Clearly, there is an urgent need for the standardization of the methods and for additional clinical studies on the impact of SDF on ART outcomes.