Con: does shockwave therapy have a place in the treatment of Peyronie’s disease?

Extracorporeal Shockwave Therapy (ESWT) has been used to treat various urological conditions such as nephrolithiasis and erectile dysfunction. The use of ESWT for Peyronie’s disease (PD) has been a subject of debate since Bellorofobate et al. published the first report on the use of ESWT on a PD patient in 1989 (1). The mechanism of action of ESWT in PD patients is still unknown mainly due to the lack of an animal model truly resembling PD. Multiple theories had been hypothesized with regards to its mechanism of action. Levine hypothesized that EWST causes destruction and lysis of the plaque by inducing an inflammatory response that attracts macrophages to the plaque site, leading to changes in vascularity and plaque resorption (2). In addition, direct trauma caused by ESWT may produce scar formation on the contralateral side of the penile shaft and, thus, correct the curvature. The other possible theory is that ESWT causes degradation of the plaque leading to an increase of the surface area in contact with the drugs introduced either locally or systemically (3). None of these theories have, however, yet to be scientifically proven.

Many papers have been published, but very few are well structured. Hauck et al. (4) published a meta-analysis of 17 studies that evaluated the effects of ESWT on PD patients. They concluded that the effect of ESWT on PD patients is still questionable and must be evaluated in a randomized manner. Their initial results revealed a possible positive effect on penile pain and sexual function. Since then, four randomized clinical trials (RCTs) have been published. In this paper, we evaluate these RCTs and assess the effects of ESWT on PD patients from different aspects, namely pain, curvature, erectile function, and plaque size. We also analyze the best studies and offer our opinions and recommendations.

Palmieri et al. (5) reported the first placebo-controlled RCT to evaluate the effect of ESWT on PD patients. The study included 100 patients with less than a 12-month history of PD; patients were divided into two groups of 50. The intervention group received 2,000 shockwaves, under the Storz Duolith ESWT system, for four weekly treatment sessions. The goal of the study was to evaluate the therapeutic advantage in treatment-naïve patients. The primary end points were not stated in the manuscript, and there were no sample size power calculations. Patients were followed for 12 and 24 weeks post-treatment. The results showed significant statistical improvement in pain, quality of life (QoL), and IIEF-5 score between the two groups and from baseline to 12 and 24 weeks. In terms of pain, there was an improvement by five points in the ESWT group compared with the control group. Further, 83% of patients reported pain improvement in the ESWT group compared with 43% in the placebo arm. IIEF-5 also improved by five points in the ESWT group compared with stability in the control arm over the follow-up period. Penile curvature did not differ significantly between the two groups, but the placebo arm showed some worsening of penile curvature from baseline, while the ESWT group showed a stable curve. These authors concluded that ESWT led to pain resolution and improved QoL and erectile function over the study period.

However, Palmieri et al. (5) recognized some study limitations, including the restricted inclusion criteria, which did not represent real day-to-day life. The QoL questionnaire was not validated, and the cause of erectile dysfunction was not characterized. This paper has been criticized for its short follow-up and subjective outcomes. Further, the authors used the visual analogue scale (VAS) to assess the improvement in pain; however, it is not clear if it was used during the primary assessment where the pain caused by the injection itself would contribute to the VAS results. Alternatively, it may have been completed afterward, potentially leading to recall bias. Further, the VAS was not validated for situational pain.

Chitale et al. (6) published the second RCT, in which they compared ESWT to a sham treatment. The end point was to assess the change in penile curvature and IIEF-5 improvement. This study aimed to have 50 patients in each arm, but the authors were able to recruit only 36. Sixteen patients received ESWT, and 20 patients were in the control arm. The intervention group received six weekly sessions of 3,000 shocks per session. Half of the patients had been having their symptoms for more than 12 months with the mean symptom duration being 24 months. In this trial, only 14 patients had a painful erection despite a long-standing stable deformity, which makes it difficult to draw conclusions about pain management from this study. There was no significant positive influence of ESWT on any of the outcomes. However, although not statistically significant, the patients in the ESWT group had more of a deterioration of dorsal curvature and further penile shortening compared with the control arm. The other variables were the IIEF-5 score, VAS score, and global assessment questionnaire. The study has been criticized for its small sample size and short follow-up.

Table 1 summarizes the main findings and weaknesses of randomized controlled trials evaluating the role of ESWT for the management of PD. 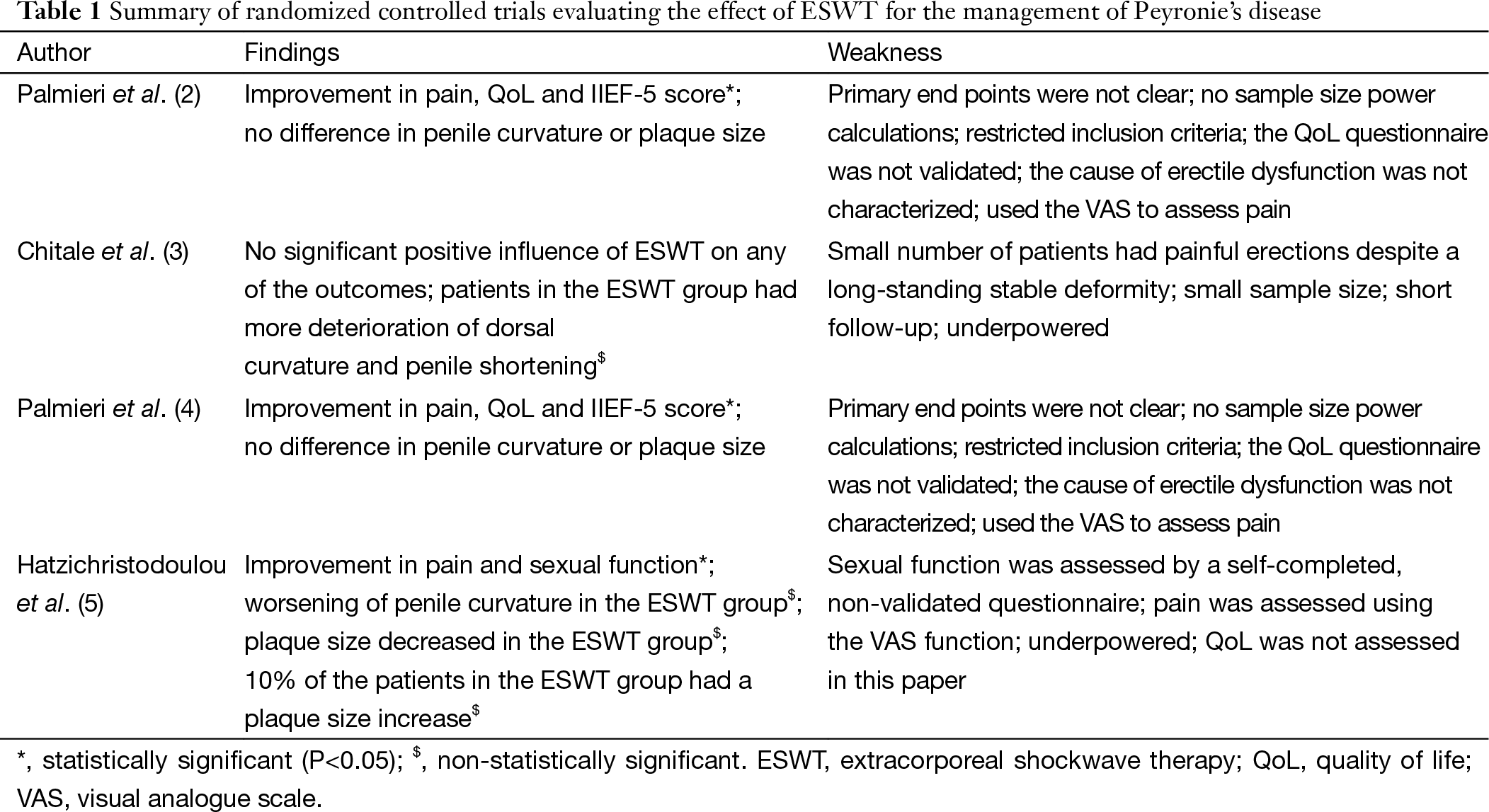 While ESWT is a novel method of treating PD, its mode of action and efficacy remain questionable. Four RCTs have evaluated this subject, and the results are inconsistent and confusing owing to their different shockwave generators and protocols as well as inclusion and exclusion criteria.

Penile pain is a common symptom of PD. It presents in 30% to 40% of patients in the early stage of the disease (9). The RCTs evaluating the effect of ESWT on PD patients suggested some added benefit of ESWT in pain resolution and improvement in 3 out of 4 trials. These trials were hindered by the small sample size, short follow-up duration, and some statistical flows. The natural history of pain associated with PD has been reported in the literature to have a spontaneous resolution with no interventions in the majority of patients (up to 80%) (10). In the ESWT literature, several studies have reported a positive effect of ESWT on penile pain, as evaluated by using the VAS (5-8). In these studies, when the ESWT group was compared with the control group, the improvement in pain ranged from four to five points in the VAS for the ESWT group compared with one to three points for the control group. Hence, the use of the VAS to assess pain is the main criticism of these studies, as pain is mostly situational and associated with an erection. To our knowledge, the VAS has never been used to assess situational pain that occurs, mainly, with an erection. Another point is that it is not clear if the VAS was used at the time of an artificial erection during the Doppler study or during a normal visit. Both situations are subject to bias as, in the first situation, the high VAS score may have been secondary to the pain caused by the injection, while in the second situation, recall bias may have played a role.

Two out of four trials showed an increase in penile curvature in the ESWT group in up to 40% of patients (6,8). By recommending ESWT for PD patients, we are exposing them to the harmful effects of the treatment. Hatzichristodoulou et al. (8) suggested that the use of ESWT should be reserved only for refectory cases after a trial of anti-inflammatory medications and analgesics or if pain persists despite the stability of the disease. The effect of ESWT on penile curvature is worrisome and it should be disclosed to patients if ESWT is offered.

One theory of the effect of ESWT on PD patients is the direct breakage of the plaque by shockwaves. However, none of the randomized trials (5-8) showed a significant improvement in plaque size compared with the control arm. Moreover, there was some worsening in plaque size in the ESWT group (8), which is concerning and may complicate further management.

Most papers reported the rate of acute side effects, including petechial hemorrhage, penile hematoma, increasing penile pain, and urethral bleeding. None reported rates of late side effects and long-term results. We still question how anyone would recommend a treatment modality without knowing what will happen after the study period.

Another point that must be mentioned here is the cost-effectiveness of the treatment imposed on patients and the healthcare system. This stems from the off-work days taken to be present for four to six treatment sessions and the cost of each session. This issue should be carefully assessed before recommending a questionable treatment modality for any patient outside a study protocol.

Finally, the American Urology Association recently published the first guidelines on the management of PD (11). It based its recommendation on the best available literature analyzed earlier. It recommended against the use of ESWT to treat penile curvature or plaques. Further, it added that clinicians may offer ESWT to improve penile pain, stating that “it is the opinion of the Panel that the overall utility of ESWT in the management of PD is low.” Hence, the decision to offer ESWT for pain management is left for the treating urologist without strong recommendation.

Based on the available evidence and after more than a decade of ESWT application on PD patients, we find the data to be insufficiently convincing to recommend the use of ESWT in patients with PD for any reason. A multicenter, randomized, double-blind, controlled clinical trial with a large sample size and long-term follow-up duration is therefore needed.

Conflicts of Interest: Dr. S Carrier provided a presentation and participated on the Eli Lilly advisory board; A Alkhayal has no conflicts of interest to declare.