Prostate cancer (PCa) is the second most common cancer in the world, and is also a leading cause of cancer-related death in men (1,2). In recent years, the incidence rate of PCa has increased significantly in China, and the proportion of patients with advanced PCa in China is much higher than that in European and American countries (3). Androgen deprivation is the main treatment for patients with advanced PCa. As a new-generation androgen-receptor antagonist, enzalutamide effectively prolongs the overall survival of patients, and is a first-choice drug for metastatic castration resistant PCa (mCRPC) patients (4). However, 20–40% of patients with mCRPC patients demonstrate de novo resistance to enzalutamide, and most patients will acquire drug resistance after 1–2 years of treatment sensitivity (5-7). After secondary resistance, the disease develops rapidly and maliciously, and patient prognosis is poor (5-7). Thus, enzalutamide-resisant molecular regulatory mechanism needs to be studied urgently, and the corresponding early warning markers and intervention targets identified.

Long non-coding RNA (lncRNA) is a class of non-coding RNA molecules with a length >200 nt (8-10). LncRNA regulates cell function through many levels and mechanisms, including chromatin modification, transcriptional regulation, and microRNA function regulation, and it also plays an important role in the biological behavior of tumors (11,12). For example, lncRNA SChLAP1 enhances the ability of invasion and metastasis of PCa by inhibiting the function of the SWItch/Sucrose Non-Fermentable complex (13). ROR1-HER3 and the Hippo-YAP pathway depend on lncRNA MAYAY mediated crosstalk activation to induce osteoclast differentiation and promote bone metastasis in breast cancer (14). LncRNA TTTY15 from the Y chromosome upregulates the expression of cell division protein kinase 6 and fibronectin-1 through the sponge adsorption of miRNA-let-7, which promotes the progression of PCa (15). However, there are few reports about the role of lncRNA in disease progression after enzalutamide resistance in PCa.

In this study, we found that enzalutamide resistance induced by lncRNA NONHSAT210528 promoted the expression of YOD1 through the mechanism of competitive endogenous RNA (ceRNA) by regulating the expression of miR-21-5p in PCa cells after resistance to enzalutamide. Overall, lncRNA NONHSAT210528 directly enhanced the malignant characteristics of PCa cells. We present the following article in accordance with the ARRIVE reporting checklist (available at https://tau.amegroups.com/article/view/10.21037/tau-22-99/rc).

The total RNA of the samples was quantified by NanoDrop ND-2000 (Thermo Scientific, USA), and RNA integrity was detected by Agilent Bioalyzer 2100 (Agile technologies, USA). After the RNA quality inspection was qualified, the sample marking, chip hybridization and elution refer to the standard flow of chip. First, the total RNA was reverse transcribed into double-stranded complementary DNA (cDNA), and the cDNA labeled with cyanine-3-CTP (Cy3) was then synthesized. The labeled cDNA was hybridized with microarray, and the original image was obtained using the Agilent scanner G2505C (Agilent Technologies) after elution. The original data were extracted using Feature Extraction software (Version 10.7.1.1, Agilent Technologies). Next, quantitative standardization and the subsequent processing were carried out using geneprinting software (version 13.1, Agilent technologies). The standardized data were filtered, and at least 1 group of 100% labeled “P” probes in each group of samples were left for the subsequent comparative analysis. Differential genes and differential lncRNAs were screened by the P value and the fold-change value of the t-test. The screening criteria were an upregulated or downregulated fold-change value ≥2.0 and P value ≤0.05.

Human PCa cell lines (C4-2, C4-2b) were purchased from American Type Culture Collection (ATCC). All PCa cells were cultured in RPMI 1640 medium supplemented with 10% Fetal bovine serum at 37 ℃ in 5% CO2. Enzalutamide-resistant C4-2 cell (C4-2 ENZ-R) was established by being exposed to increasing concentrations of enzalutamide according to previous study (16). For NONHSAT210528 overexpression, we cloned NONHSAT210528 into pLVX-vector by gene synthesis and NONHSAT210528 overexpression vector (pLVX-NONHSAT210528) was transferred into cells. The siRNA target sequences (5'-ACCCACTATAATGTATCATTAGT-3') were used for knockdown NONHSAT210528, and were cloned into pLKO.1-Vector.

Total RNA was extracted from the cells and tissue by Trizol reagent, and the concentration of RNA was detected by NanoDrop. One microgram of extracted RNA was reverse transcribed using an RNA reverse transcription kit. A real-time fluorescent quantitative polymerase chain reaction (PCR) was performed using the SYBR Green Real-Time Quantitative PCR Master Mix kit, and the sample was added according to the instructions of the kit. The reaction conditions were as follows: Procedure 1: 95 ℃, 30 s, 1 cycle; Program 2: 95 ℃, 5 s, 50 cycles, 60 ℃, 34 s; Program 3: 95 ℃, 5 s, 1 cycle, 65 ℃, 60 s, 97 ℃, 1 s, and Program 4: 42 ℃, 30 s, 1 cycle. The relative gene expression was calculated by the 2−△△CT method, and the messenger RNA (mRNA) expression was corrected by glyceraldehyde 3-phosphate dehydrogenase expression, and the lncRNA expression was corrected by GAPDH expression.

The cells were seeded into a 96-well culture plate with a density of 4,000 cells/well. The activity of cells was detected using Cell Counting Kit-8 (CCK-8) at 24 h, 36 h, 48 h, and 96 h after inoculation with 10 µL of CCK-8 in a 37 ℃ incubator for 2 h. The absorbance at 450 nm was detected by an enzyme reader. For the colony formation assay, cells were plated in 6-well plates (1,500 cells/well). After incubation for seven days, the cells were fixed with paraformaldehyde and stained with crystal violet stain.

The MS2bs sequence was coupled to the lncRNA NONHSAT210528 sequence, lncRNA NONHSAT210528 overexpression vector coupled with MS2Bs sequence was transfected into cells. The cells were lysed and incubated with MS2 protein labeled by magnetic beads with cell lysate, and then the pull down product was detected by qPCR. Biotin labeled miRNA was incubated with cell lysate to form RNA-RNA complex. The complex can be combined with streptavidin labeled magnetic beads to separate from other components in the incubation solution. The complex was eluted and detected by qPCR.

After the culture supernatant was sucked off, it was washed once with phosphate buffer, and 100 µL of RIPA lysate containing 1 mmol/L of PMSF was added to each hole. The cells were scraped off on ice with a cell scraper, lysed on ice for 30 min, centrifuged at 12,000 r/min for 15 min at 4 ℃, and the protein lysate supernatant was then collected. The bicinchoninic acid assay method was used to detect the protein concentration. 10% sodium dodecyl-sulfate polyacrylamide gel electrophoresis was prepared, and 20 µg of protein was added to each hole. After electrophoresis, the protein was transferred to polyvinylidene fluoride membranes at 300 Ma for 120 min, sealed with 5% BSA for 1 h, incubated with primary antibody at 4 ℃ overnight, washed with Tris Buffered Saline with Tween (TBST) 3 times, incubated with secondary antibody at room temperature for 1 h, washed with TBST another 3 times, and then developed with ECL developer.

Experiments were performed under a project license (No. 2019QN02) granted by Animal Care and Use Committee of Shanghai Changhai Hospital, the First Affiliated Hospital of Naval Military Medical University, in compliance with eighth edition guidelines for the care and use of experimental animals (17). A protocol was prepared before the study without registration. Male nude mice (BALB/C, 6 weeks old) were purchased from Shanghai Laboratory Animal Center (SLAC, China) and housed under specific pathogen-free conditions. The mice were divided randomly into four groups (five mice per group): (I) pLVX-NONHSAT210528 group; (II) pLVX-Vector group; (III) pLKO.1- NONHSAT210528 group; (IV) pLKO.1-Vetor group. After digesting the logarithmic growth C4-2 cells with trypsin, the C4-2 cells were resuspended with serum-free medium, and the cell concentration was adjusted to 1.0×107 cells/mL. Next, 100 µL of cell suspension was injected into the back of the male nude mice. The tumor volume was measured once a week. After the sixth week of inoculation, the mice were killed by cervical dislocation. The tumor tissue was removed, weighed, and photographed. The animal experiment was done in the Laboratory Animal Centre of Naval Military Medical University. 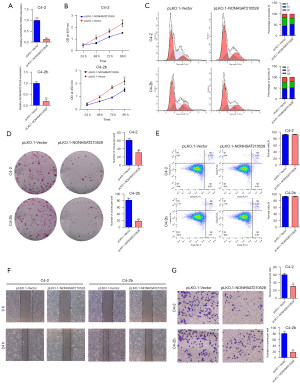 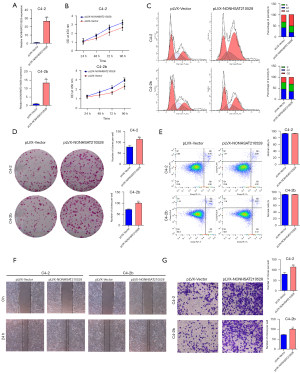 LncRNA NONHSAT210528 regulated the proliferation of C4-2 cells in vivo 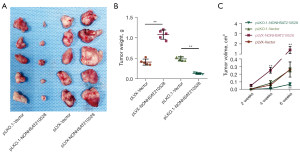 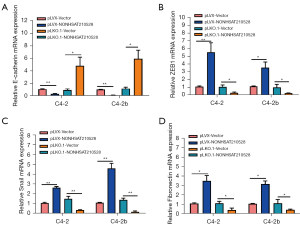 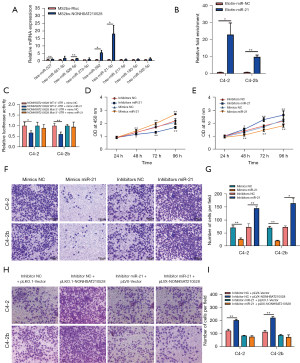 LncRNA NONHSAT210528 regulated the expression of YOD1 dependent on miR-21

To date, most in-depth research on the related functions of lncRNA has focused on its role in cancer. Under normal physiological conditions, the expression of lncRNA is strictly regulated. Conversely, the abnormal expression of lncRNA is accompanied by the occurrence and development of many cancers. LncRNAs can not only promote tumor formation as protooncogenes, but also inhibit the proliferation and migration of tumor cells as tumor suppressor genes (22). The results of the lncRNA microarray analysis showed that the expression level of lncRNA NONHSAT210528 was significantly increased in the C4-2b-ENZR cells. The drug resistance of tumor cells to anti-cancer drugs is a main reason for the failure of chemotherapy (23,24). In both congenital and acquired drug resistance, the abnormal activation of the intracellular signal pathway is closely related to tumor drug resistance. LncRNAs can cause drug resistance by affecting the tumor cell cycle. At present, many studies have reported that lncRNAs are involved in the drug resistance of PCa (25,26). Such as, lncRNA PCAT1 was found to promote the castration resistance of PCa patients by activating the AKT and NF-kappa B signaling pathway (27). Additionally, LncRNA HORAS5 promotes taxane resistance in castration-resistant PCa via a BCL2A1-dependent mechanism (28). LncRNA PCBP1-AS1-mediated AR/AR-V7 deubiquitination enhances PCa enzalutamide resistance (29). Previous studies have reported that lncRNA can regulate the function of downstream miRNA through the ceRNA mechanism, thus regulating the expression of target genes (12,30). Using bioinformatics software analysis, dual-luciferase reporter gene, and RNA pull-down assays, it was found that NONHSAT210528 binds to miR-21-5p, and regulates the function of miR-21-5p. Subsequently, using bioinformatics, dual-luciferase reporter gene, and RNA pull-down assays, we found that miR-21-5p targets the expression of YOD1. YOD1 is a highly conserved deubiquitinase in the otubain family, which removes ubiquitin residues from polyubiquitinated proteins. Despite being highly conserved, the function of YOD1 in high-grade eukaryotes is not clear. YOD1, as a target gene of miR-4429, regulates the metastasis of ovarian cancer (31). LncRNA FIRRE promotes the progression of gallbladder cancer by mediating the expression of YOD1 through a ceRNA mechanism (32). It has been reported that YOD1 may become a biomarker for the prognostic evaluation of PCa (33). In this study, we found that YOD1 is involved in the resistance of enzalutamide, which may become a new target for the treatment of enzalutamide resistance.

Enzalutamide-resistant related lncRNA NONHSAT210528 appears to promote the proliferation and invasion of C4-2 and C4-2b cells by functioning as a ceRNA and regulating the miR-21-5p/YOD1 signal pathway.

Reporting Checklist: The authors have completed the ARRIVE reporting checklist. Available at https://tau.amegroups.com/article/view/10.21037/tau-22-99/rc

Conflicts of Interest: The author has completed the ICMJE uniform disclosure form (available at https://tau.amegroups.com/article/view/10.21037/tau-22-99/coif). The author has no conflicts of interest to declare.

Ethical Statement: The author is accountable for all aspects of the work in ensuring that questions related to the accuracy or integrity of any part of the work are appropriately investigated and resolved. Experiments were performed under a project license (No. 2019QN02) granted by Animal Care and Use Committee of Shanghai Changhai Hospital, the First Affiliated Hospital of Naval Military Medical University, in compliance with eighth edition guidelines for the care and use of experimental animals.