Ureteral fibroepithelial polyp protruding into the bladder which mimics a bladder tumour: a case report and literature review

A ureteral fibroepithelial polyp is a rare benign tumour that develops in the urinary tract (1,2). The aetiology of this tumour remains unclear. Patients often present with haematuria and flank pain due to obstructive hydronephrosis and urinary tract infection (2,3). Few cases and small series have been reported in the literature. Therefore, the choice of treatment remains unclear. Following the introduction of endoscopy for its diagnosis and treatment in recent times, several authors have reported favourable results using the endoscopic approach without complication or recurrence. Currently, endoscopic treatment has been increasing worldwide (2,4,5). Early diagnosis and treatment are necessary to prevent aggravation of the disease and possible complications. We present the following case in accordance with the CARE reporting checklist (available at https://tau.amegroups.com/article/view/10.21037/tau-21-1041/rc).

A 49-year-old patient presented with an echogenic bladder mass on pelvic sonography. The patient had storage symptoms, such as urgency, frequency, and intermittent haematuria that had occurred 3 months prior. During a regular check-up at the gynaecological department, pelvic sonography had revealed an echogenic bladder mass, measuring approximately 4.36×1.76 cm2. She was a healthy woman with no medical or surgical history. The clinical examination results were normal. Microscopic haematuria was observed on urine analysis; otherwise, haemogram and renal function test results were within normal limits. Urine culture and cytology results in voided urine samples were negative.

The patient underwent cystoscopy, which revealed an irregularly shaped large bladder mass. However, the left ureteral orifice was not identified because it was covered by a large mass, suggesting a benign or malignant bladder tumour (Figure 1).

Subsequently, an intravenous urography (IVU) revealed a large filling defect of approximately 4 cm in the ipsilateral bladder wall. Contrast-enhanced computed tomography (CT) showed a lobulated contour filling defect in the bladder with a suspected finding of a long stalk in the left distal ureter during the excretory phase, which was not clearly identified. The polypoid lesion was not clearly seen in the corticomedullary phase without infiltration into the surrounding tissues or distant organs (Figure 2). Based on the result of the examinations, we suspected that the tumour possibly originated from the bladder. 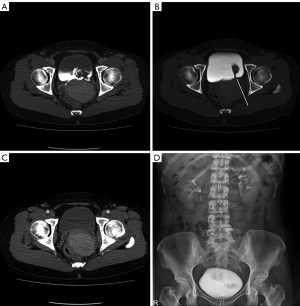 Figure 2 The finding of contrast-enhanced abdominal computed tomography and intravenous urography. (A,B) Contrast-enhanced abdominal computed tomography showing lobulated contour filling defect in the bladder with a suspected finding of a long stalk in the left distal ureter during the excretory phase (early excretory and delayed excretory, respectively). (C) The polypoid lesion was not definitely seen on the corticomedullar phase without enhancement. (D) Intravenous urography showing about 4 cm-sized large filling defect in the ipsilateral bladder wall.

A ureteroscopy was performed to inspect the origin and characteristics of the tumour lesion. We identified a long and narrow pedunculated tumour in the left distal ureter protruding into the bladder cavity through the ureteral orifice. Its implantation stalk was clearly identifiable. These findings were compatible with those of a fibroepithelial ureteral polyp (Figure 3).

Accordingly, we decided to perform the endoscopic treatment. Endoscopic excision was performed by cutting the attached stalk of the polyp into the ureter using holmium:yttrium aluminium garnet (YAG) laser (0.5 J, 10 Hz) and a long pulse setting. The polyp was completely excised and extracted in its entirety with en bloc mobilisation using graspers. There were no bleeding or other intraoperative complications. A ureteral stent was placed to prevent ureteral stricture postoperatively, which was removed after a week.

The excised polypoid lesion measured about 4.5×1.0 cm2 with a smooth, irregular surface. Pathological examination confirmed an elongated mucosa-lined fibroepithelial polypoid tissue with congested elongated vessels and dense fibrotic stroma with abundant collagen. Otherwise, the lining urothelium was histologically unremarkable without a few infiltrating lymphocytes. No dysplasia or malignancy was observed. These histopathological findings confirmed the diagnosis of fibroepithelial polyps (Figure 4). 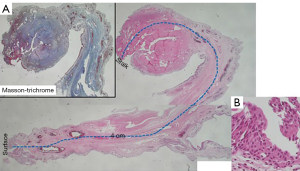 Figure 4 Histopathological findings were compatible with a fibroepithelial ureteral polyp. (A) An elongated mucosal-lined polypoid mass (about 4 cm in greatest length) shows congested elongated vessels and dense fibrotic stroma (inlet: Masson-Trichrome, blue in collagenous stroma) (HE, ×10). (B) The lining urothelium is histologically unremarkable without a few infiltrating lymphocytes (HE, ×40). HE, hematoxylin and eosin staining.

The patient had no specific symptoms after the endoscopic procedure. Additionally, laboratory tests including haemoglobin and glomerular filtration rate (GFR) were performed during the first postoperative week, and no changes were observed after the treatment. A CT scan performed after 12 months showed no signs of complication or recurrence.

All procedures performed in this study were in accordance with the Declaration of Helsinki (as revised in 2013). Written informed consent was obtained from the patient to publish this case report and accompanying images. A copy of the written consent is available for review by the editorial office of this journal.

Fibroepithelial polyps of the ureter are rare benign lesions of the urinary tract. These lesions may be found most frequently in the proximal ureter. However, they may also be encountered in any part of the urinary tract, such as the renal pelvis, bladder, urethra, and distal ureter (1,2).

There is insufficient data on gender differences in the incidence rate of the disease, although some studies have reported that the incidence rate in women was higher than that in men (2). The disease occurs most frequently in patients aged between 20 and 40 years but may also occasionally affect the paediatric population. Fibroepithelial polyps in children are primarily located in the ureteropelvic junction and upper ureter, and cases of polyps in more distal parts of the ureter are few (1,4). Additionally, paediatric polyps showed a higher incidence among males and a more frequent involvement of the left ureter (5).

The pathogenesis of fibroepithelial polyps remains unclear. Several reports have proposed obstruction, urolithiasis, trauma, persistent irritation, recurrent infection, congenital anomaly, and hormonal imbalance as causative agents (2,5). Patients often present with intermittent flank pain or discomfort due to obstructive hydronephrosis (79%) and haematuria (58%) (2,3). Moreover, it may present with recurrent urinary tract infection or voiding symptoms such as urinary retention and storage symptoms, such as frequency. Ureteral fibroepithelial polyps could present with irritating bladder symptoms, including frequency and urgency when it protrudes into the bladder (6,7). In our case, urgency and frequency were probably associated with prolapse of the polypoid lesion into the bladder cavity.

Fibroepithelial polyps can be diagnosed using several modalities, including IVU, ultrasound, CT, or retrograde pyelogram. IVU can reveal long spiral filling defects, typically suggestive of intraluminal polypoid lesions with upstream ureteral dilatation. An ultrasound scan shows an echogenic mass with lobulated projections near the ureteral orifice if a fibroepithelial polyp protrudes into the bladder cavity, which is similar to our case. Currently, multidetector CT is thought to be the preferred imaging method with superior diagnostic accuracy than other radiologic modalities (4). However, the radiological findings of ureteral fibroepithelial polyps are non-specific. The other conditions needed for differential diagnosis may include urothelial carcinoma (UC), blood clots, or radiolucent urinary calculi (3). Therefore, ureteroscopy plays an important role in the diagnosis, allowing the identification of smooth and regular appearance of fibroepithelial polyps in direct endoscopic vision and to conduct a biopsy, which is often helpful in ruling out UC (6,8), although only two cases of ureteral fibroepithelial polyps have been proven to be concurrent malignancies in previous reports (2,3). Several studies have reported fibroepithelial polyps with intussusception of the ureter, and diagnosis with ureteroscopy was necessary to screen intussusception with signs of ischaemia (6,7,9).

Recently, the incidence of the disease has increased with the frequent use of endoscopy as a diagnostic method. However, few cases and small series have been reported in the literature; therefore, the treatment of choice remains unclear. Due to its low incidence, there is no definite guideline on managing ureteral fibroepithelial polyps. The treatment for these polyps can be determined according to patient characteristics such as the size and the site of the polyp, the existence of a urinary tract infection and obstruction, renal function, and suspicion of malignancy (4,10).

In the pre-ureteroscopy era, surgical treatment of ureteral fibroepithelial polyps has traditionally been performed through open surgery, including partial ureterectomy, dismembered pyeloplasty, or nephroureterectomy (3). Ludwig et al. performed a systematic literature review of fibroepithelial polyps of the ureter. In their study, the proportion of mode of treatment of ureteral fibroepithelial polyps from 1980 to 2014 was 23.0%, 23.0%, 8.8%, and 43.4% for ureterotomy, partial ureterectomy, nephroureterectomy, and endoscopic resection, respectively. Moreover, conservative management, percutaneous, or laparoscopic resection have been reported in selected cases (5,9). Overall, the proportion of patients treated endoscopically increased from 0% before 1985 to 67% after 2005. Only two perioperative complications occurred after open surgery: one case of deep venous thrombosis and another of mesenteric lymphadenopathy (2).

Debruyne et al. reported that there was neither recurrence nor late complications (3). In another study, Ludwig et al. illustrated two cases with remnant or recurrent stones, one with ureteral stricture and one with recurrent polyps (7.0% of available data). Most of these patients had initially been treated endoscopically. Considering the pattern of recurrence period (occurred within the first year) and the benign nature of the fibroepithelial polyps, they recommended a CT-IVU after 3 months and an ultrasound after 1 year as follow-up methods (2).

Currently, endoscopic surgery has become the most frequently used modality for treating ureteral fibroepithelial polyps, especially in healthy patients with normal ipsilateral renal function, as seen in the present case. After introducing endoscopic techniques in recent times, several authors have reported favourable results. They described the effectiveness and safety of ureteroscopic resection or fulguration using electrocautery or holmium:YAG laser with early convalescence and low incidence of ureteral strictures or recurrences in their reports (2,4,8,11). In our case, we used holmium:YAG laser at 0.5 J, 10 Hz to treat fibroepithelial polyps. This laser has been proven to be a safe tool because of its weak shock waves with minimal tissue injury and good haemostasis effect (12,13).

Following treatment, clinical and radiological monitoring is needed regularly due to the possibility of recurrence and late complications (2,5).

We presented the case of a female patient with ureteral fibroepithelial polyps protruding into the bladder, which mimics a bladder tumour. The polyp was treated by endoscopic resection using holmium:YAG laser with no complications or recurrence. Endoscopic treatment is an effective and safe method for treating fibroepithelial polyps of the ureter. Additionally, it should be noted that there is a possibility of a wrong diagnosis in cases where bladder masses are observed and the ureteral orifice is not clearly identified on cystoscopic examination. In such cases, ureteroscopy is recommended for accurate diagnosis and the most suitable treatment, especially in suspicion of the existence of connecting part into ureter in the imaging study.

The authors thank the entire staff of the Department of Urology, Sanggye Paik Hospital, Inje University College of Medicine.

Reporting Checklist: The authors have completed the CARE reporting checklist. Available at https://tau.amegroups.com/article/view/10.21037/tau-21-1041/rc

Conflicts of Interest: All authors have completed the ICMJE uniform disclosure form (available at https://tau.amegroups.com/article/view/10.21037/tau-21-1041/coif). The authors have no conflicts of interest to declare.

Ethical Statement: The authors are accountable for all aspects of the work in ensuring that questions related to the accuracy or integrity of any part of the work are appropriately investigated and resolved. All procedures performed in this study were in accordance with the Declaration of Helsinki (as revised in 2013). Written informed consent was obtained from the patient to publish this case report and accompanying images. A copy of the written consent is available for review by the editorial office of this journal.