Renal cell carcinoma (RCC), one of the most lethal urological malignancies, accounts for 2.2% of all new cancer cases and 1.8% of cancer deaths around the world (1). Approximately one-third of patients with RCC present initially with regional or distant metastases (2) and a quarter eventually relapse or progress to metastatic renal cell carcinoma (mRCC) after nephrectomy (3).

Over the past decade, the treatment paradigm for mRCC has been shifting and considerable progress has been achieved (4). Tyrosine-kinase inhibitor (TKI) has been considered as the standard systemic treatment drugs for mRCC worldwide (5). TKI, such as sunitinib, axitinib, pazopanib and sorafenib, has been shown to play a role in vascular endothelial growth factor receptor signaling pathway (6). All of these agents share similar side effects, one of which is nephrotoxicity. TKI agents can cause damage to the microvasculature glomerulus, tubules and interstitium, leading to adverse events such as including proteinuria (7). As a direct marker of nephrotoxicity associated with TKI therapy, proteinuria has been shown to be a common adverse event in several clinical trials (8-10). However, whether proteinuria is associated with renal function deterioration or whether the glomerular filtration rate decline significantly after TKI therapy is still controversial.

Programmed cell death protein-1 (PD-1) inhibitor is one of the newest classes of drugs that effectively overcome cancer cell resistance by allowing the host immune cells to identify and eliminate tumor cells (11). It has been confirmed that PD-1 inhibitor has a better efficacy and overall survival for mRCC (12). However, while PD-1 inhibitor has greatly improved the prognosis of many cancers, kidney lesions of these agents resulting in acute kidney injury and/or proteinuria have been described (13), especially the acute tubulointerstitial nephritis (14). Increasing number of patients with long-term TKI treatment have begun to receive subsequent PD-1 inhibitor combination therapy after drug resistance. Thus, it is worth exploring whether their proteinuria and renal function will deteriorate further due to the administration of PD-1inhibitor.

We conducted a retrospective study to assess the change of proteinuria and renal function in mRCC patients who received a long-term TKI treatment and some underwent subsequent PD-1 therapy. We also explored the associated predictors for proteinuria deteriorate and significant estimated glomerular filtration rate (eGFR) decline in these patients cohort.

We present the following article in accordance with the STROBE reporting checklist (available at https://tau.amegroups.com/article/view/10.21037/tau-21-1015/rc).

The study was conducted in accordance with the Declaration of Helsinki (as revised in 2013). The study was approved by the Sun Yat-sen University Cancer Center (No. sZR2020-091) and individual consent for this retrospective analysis was waived. We retrospectively reviewed the clinical data from 380 patients with mRCC who were all treated with TKI from February 2010 to June 2020 at Sun Yat-sen University Cancer Center.

Prior to TKI treatment, all patients were assessed for Karnofsky performance status (KPS), International Metastatic Renal-Cell Carcinoma Database Consortium (IMDC) risk classification, proteinuria, and renal function. IMDC risk classification is a prognostic model for mRCC patients, including six prognostic factors (anaemia, hypercalcaemia, thrombocytosis, neutrophilia, KPS <80, and <1 year from diagnosis to first-line targeted therapy). Subsequently, the TKI drug efficacy and adverse events of patients were assessed in regular outpatient follow-up. Finally, a total of 141 patients who underwent proteinuria testing and renal function tests at least twice during their follow-up period were included. Among them, 65, 39, 27 and 10 patients received sunitinib, axitinib, pazopanib, and sorafenib as a first-line TKI agent, respectively. Further, 11, 37, 7, 2 and 5 were further treated with sunitinib, axitinib, pazopanib, sorafenib, and everolimus, respectively, as a second-line agent. There were 66 patients who received PD-1 therapy after long-term TKI treatment, however, only 34 of them had proteinuria testing and renal function test at least twice at the PD-1 phase were further analyzed for proteinuria deterioration and eGFR decline. Patients’ survival was defined as the time from the initiation of TKI treatment to the date of death as a result of any cause or was censored at the date of last follow-up.

At each outpatient follow-up, qualitative results of proteinuria were tested by the protein error method using a dipstick and scored as −, ±, 1+, 2+, 3+, and 4+. According to the Common Terminology Criteria for Adverse Events (CTCAE) version 3.0 (15), proteinuria grade was classified as grade 0 (− or ±), grade 1: (1+), grade 2 (2+ and 3+) and grade 3 (4+). Proteinuria aggravation was defined as an upgrade in the maximum level of proteinuria after TKI dosing compared with baseline. Renal function tests included serum creatinine (SCr), blood urea nitrogen (BUN), and cystatin C (CYSC). SCr peak value was chosen to reflect renal function at TKI therapy stage. The eGFR was calculated using the Chronic Kidney Disease Epidemiology Collaboration formula (16). A drop of more than 15% in eGFR after treatment was considered as a significant decline in renal function.

All the statistical analyses were conducted using the SPSS software, version 24.0 (SPSS Inc., Chicago, IL, USA). The Wilcoxon signed-rank test was used in two sets of related samples. As for three sets of related samples, the Friedman test was first used to analyze whether there was a difference in the data and the Nemenyi test was performed in pairwise comparison (17) Two binary logistic regression models were established to analyze the proteinuria aggravation and the renal function decline. All predictors were evaluated by univariate analysis, then those with significant results were included for multivariable analysis. Log-rank analysis was used to analyse the association between renal impairment and survival of patients after TKI treatment. All tests were two-tailed and P<0.05 was considered statistically significant.

The data of 141 patients treated with TKI for mRCC were used for this study. The average age of the included patients was 50.10 years (standard deviation, SD: 13.56) and 107 (76%) patients were male. The KPS scores of 105 (74%) patients were ≥80. Thirty-six (26%) patients had hypertension and 20 patients were on long-term hypertension medications. The IMDC risk was classified as favorable for 23 patients (16%), intermediate for 70 (50%), and poor for 48 (34%). Eighty patients had more than one metastatic lesion. The lymph node (54%) was the most frequent metastatic site followed by the lungs (45%), bones (36%), liver (7%), colon (4%) and pancreas (3%). Throughout the treatment period, more than half of the patients received sunitinib (52%) and axitinib (53%), a quarter was treated with pazopanib and few (8%) were treated with sorafenib. The average duration of TKI treatment was 22.98 months (SD: 17.60). PD-1 inhibitor was administered in 66 patients (47%) after a long-term TKI treatment. The detailed clinicopathological information and baseline renal function of the patients are listed in Table 1. 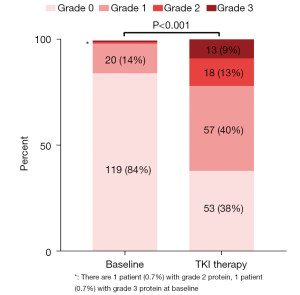 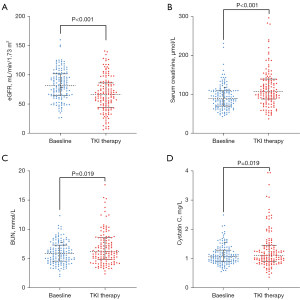 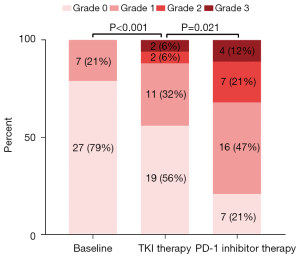 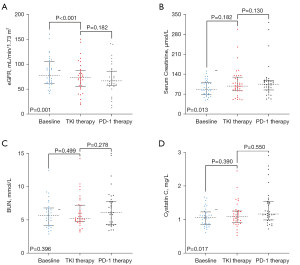 Survival and side effect

Figure 5 Log-rank analysis of the association between renal impairment and patients’ survival in 141 patients after tyrosine-kinase inhibitor (TKI) treatment. Either increase of proteinuria and decline of estimated glomerular filtration rate (eGFR) were both independent prognostic markers of overall survival.

The widespread use of TKI significantly increased the survival time of late-stage renal cancer patients (18). However, the long-term treatment-related side effects are not uncommon and, in some cases, may result in patient death (19). Vascular endothelial growth factor inhibitor-related nephrotoxicity has been reported in several kinds of cancer (20,21). However, in renal cancer patients, higher grade nephrotoxicity seems to be more common as the renal reserve is reduced due to previous nephrectomy. Although most studies reported an increase in the incidence of proteinuria, whether eGFR decline after TKI therapy is still contradictory. In recent years, the use of PD-1 inhibitor has further extended the survival time of those patients, however, few studies have focused on assessing the renal function after PD-1 inhibitor administration. The current study reported a change in proteinuria and eGFR in a group of 141 mRCC patients with long-term use of TKI and in those receiving subsequent PD-1 inhibitor. These results may provide evidence for decision marking by physicians in clinical practice.

In this current study, the TKI agents were found to have significant nephrotoxicity in 141 patients, as not only the proteinuria but also the eGFR were observed to deteriorate. Specifically, 52.48% of patients experienced an increase in proteinuria level and 22.70% were up to ≥2+ protein level. More importantly, the eGFR also showed a significant decrease from 81.56 mL/min at baseline to 66.75 mL/min after TKI treatment, and 51.06% of patients experienced an eGFR decreased by >15%. However, in a study of 65 patients treated with sunitinib, proteinuria was found to aggravate while the eGFR remained stable (22). The main reason for the inconsistency could be the relatively short follow-up time in that study. Other reports with longer follow-up time all also supported that eGFR indeed declined after long-term TKI therapy in mRCC patients. For instance, sunitinib was shown to be associated with an all-grade creatinine increase in 70% of mRCC patients (23). The median relative change in the eGFR from baseline to the nadir during sunitinib therapy was 21% in an Asian mRCC cohort (24). It is worthwhile to notice that severe renal failure may happen after TKI treatment, which can ultimately lead to patient death (25). Thus, regular proteinuria and eGFR monitoring are compulsory during TKI treatment.

Our study also explored predictors for proteinuria deterioration and eGFR decline. TKI used for greater than one year was defined as an independent predictor for both proteinuria deterioration and significant eGFR decline. This result is consistent with previous literature. Rini et al. reported a group of 108 mRCC patients treated with axitinib and found that proteinuria and serum creatinine both deteriorated (19). It is interesting to notice that hypertension was an independent predictor for eGFR decline >15%. Theoretically, proteinuria is a risk factor for cardiovascular events and clearly plays a pathogenic role in renal function loss (29). However, the relationship between proteinuria and progression of renal impairment has not been proved in previous reports. The main reason is that TKI treatment is often stopped after the appearance of proteinuria in clinical trials. However, in real-world data, the long-term persistent proteinuria may finally lead to significant eGFR decline (30).

There are some limitations of this present study worth mentioning. First, the 141 patients with different TKI agents and pathological types of tumors had certain heterogeneity, as different pathological types of tumors showed different TKI agents sensitivity. Second, some independent predictors identified in other studies such as diabetes and blood pressure (28) were not included in our analysis because of the lack of data, and thus their significance could not be assessed. Third, as a retrospective study, the management of proteinuria was not homogeneous. On the other hand, this study represents real-world data and the findings may be more practically and clinically oriented. Forth, urine albumin creatinine ratio, which is considered as a more reliable parameter to assess proteinuria, is unavailable in the current study due to its retrospective design. In further studies, we will routinely test urine albumin creatinine ratio to evaluate proteinuria.

Targeted therapy can lead to an increase in proteinuria level and a decrease in eGFR in patients with mRCC. The administration of PD-1 inhibitor may lead to an exacerbation in proteinuria, although the decrease in eGFR did not reach a statistical difference. Our results suggest that active renal function monitoring should be performed especially in patients who have been scheduled for PD-1 inhibitor or underwent TKI therapy for more than one year.

Reporting Checklist: The authors have completed the STROBE reporting checklist. Available at https://tau.amegroups.com/article/view/10.21037/tau-21-1015/rc

Conflicts of Interest: All authors have completed the ICMJE uniform disclosure form (available at https://tau.amegroups.com/article/view/10.21037/tau-21-1015/coif). The authors have no conflicts of interest to declare.

Ethical Statement: The authors are accountable for all aspects of the work in ensuring that questions related to the accuracy or integrity of any part of the work are appropriately investigated and resolved. The study was conducted in accordance with the Declaration of Helsinki (as revised in 2013). The study was approved by the Sun Yat-sen University Cancer Center (No. sZR2020-091) and individual consent for this retrospective analysis was waived.