Effects of L-carnitine combined with pancreatic kininogenase on thioredoxin 2, thioredoxin reductase 1, and sperm quality in patients with oligoasthenospermia

In recent years, related studies have found that a high concentration of reactive oxygen species (ROS) produced by inflammatory cells, germ cells, and abnormal sperm cells during growth and metabolism often causes damage to cellular DNA, lipid, and protein, and reduces sperm concentration and vitality, which is related to the occurrence of oligoasthenospermia (4). Continuously high levels of ROS can cause oxidative stress on cells and mitochondrial function disorders (5). L-carnitine (LC) is the only carrier for the transport of long-chain fatty acids into the mitochondrial inner membrane for β-oxidation, promoting oxidation reaction and providing energy for cells (6). LC also regulates testicular supporting cells, removing oxygen free radicals in seminal plasma, reducing sperm aggregation, and reducing spermatogenic cell apoptosis (6,7). At present, many hospitals regard LC as the preferred drug for the treatment of male infertility syndrome (8). The human body has a high tolerance to LC, and most patients can achieve stable absorption of the drug by direct oral administration. Pancreatic kininogenase is a proteolytic enzyme with its highest content in the pancreas. In human genitalia, pancreatic kininogenase can improve the quality of life of sperm, balance the content of components in the epididymis, and eliminate bacteria, all of which facilitate normal erectile function and regulate male sexual function (9).

This study aimed to observe and analyze the effects of LC, pancreatic kininogenase, and their combined application on thioredoxin 2 (Trx 2), thioredoxin reductase 1 (TrxR 1), and sperm quality in oligoasthenospermia patients through a clinical randomized controlled study. Evaluating the efficacy and safety of the combined application of LC and pancreatic kininogenase in the treatment of oligoasthenospermia patients will establish a clinical reference for drug therapy in male patients with oligoasthenospermia. We present the following article in accordance with the STROBE reporting checklist (available at https://dx.doi.org/10.21037/tau-21-680).

A total of 300 male infertility patients with oligoasthenospermia who were admitted to the andrology clinic of our hospital from December 2019 to December 2020 were included in this study. Inclusion criteria: (I) the couple lived together for more than 1 year, had a normal sex life without contraception, and female fertility test results were normal; (II) patients stopped all spermatogenic drug treatments for ≥12 weeks before the start of the study; and (III) following the fifth edition of the WHO standard, the male was diagnosed as oligozoospermia (sperm concentration <15×106/mL) or asthenospermia (forward motility <32%) when examined more than twice. Exclusion criteria: (I) patients with significant systemic disease, endocrine disease, reproductive tract infection, and varicocele, and (II) patients with a history of cryptorchidism, orchitis, mumps in late adolescence, anti-sperm antibodies, or other known etiologies of male infertility. All procedures performed in this study involving human participants were in accordance with the Declaration of Helsinki (as revised in 2013). The study was approved by Ma’anshan Maternal and Child Health Hospital (No. 2019084). Each participant was informed in detail about the content of the study and their rights, and participated voluntarily. All enrolled patients signed an informed consent form.

Patients were randomly divided into an LC group and combined treatment group, each composed of 150 patients. Patients in the LC group ranged from 22–34 years, with an average age of 27.85±5.18 years, while those in the combined treatment group ranged from 20–35 years old, with an average age of 28.49±5.46 years. A further 50 males with normal semen were selected as a control group, in which men with reproductive tract infections, sexually transmitted diseases, blocked vas deferens, tumors, trauma surgery, and diabetes were excluded.

According to the relevant criteria [8], cure was defined as pregnancy occurring normally during treatment or within 6 months after the treatment, and semen parameters were completely restored to normal; markedly effective was defined as sperm density ≥15×106/mL, forward motile sperm ≥32%, total sperm motility ≥40%, but pregnancy did not occur; effective was defined when at least one of sperm density, motility, or motility rates improved >30% compared to before treatment; and non-effective when there were no changes in semen examination parameters or even deterioration. The total effective rate = (cure + markedly effective + effective) cases/total cases × 100%.

Sperm in both groups was extracted with RIPA lysate, and the protein concentration was determined. A 5× loading buffer was then added, and the mixture boiled for 10 min to denature the sperm. According to the molecular weight of the target protein, the separation glue and the concentrate glue were configured, and the sample was loaded to start electrophoresis at 80 V. After 30 minutes, the sample was concentrated into the separation gel, and the voltage was changed to 120 V for 90 minutes. The PVDF membrane activated by methanol was used for transfer for 2 hours, then sealed with 5% skim milk for 2 hours, after which it was cut according to the size of the target protein band and incubated in rabbit anti-human Trx 2 (1:300) and TrxR 1 (1:300) antibodies at 4 °C overnight. The second day, the membrane was removed, washed with TBST for three times, and the secondary antibody (1:6,000) was used for incubation at room temperature for 2 hours. This was again washed with TBST three times. Solution A and solution B in the ECL detection kit were mixed in a 1:1 ratio and dropped into the PVDF membrane, and observed by gel imager.

Changes of parameters and indexes in routine semen examination

All patients completed the study. There were no significant differences in sperm density, motility rate, forward motile sperm rate, and DNA fragmentation rate in oligoasthenospermia patients before treatment (P>0.05). However, after 1 month of treatment, the sperm density, motility rate, and forward motile sperm rate were all higher than those before treatment (P<0.05), while the DNA fragmentation rate was lower than that before treatment. At the same time, the parameters of semen in the combination group were higher than those in the LC group (P<0.05). After 3 months of treatment, semen parameters improved significantly, as shown in Table 1 and Figure 1. The morphology of the sperm is shown in Figure 2. 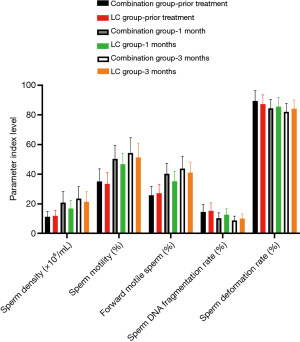 Figure 1 Comparison of semen parameters before and after treatment. LC, L-carnitine. 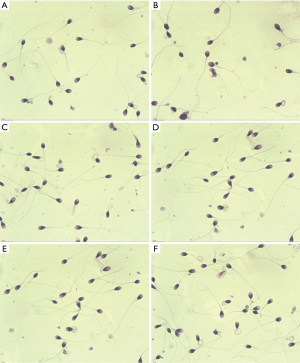 Expression of Trx2 and TrxR1 in sperm

Figure 3 Expression of TrxR 1 in sperm of subjects at different times was detected by Western-blotting. LC, L-carnitine; TrxR 1, thioredoxin reductase 1.

Male oligoasthenospermia is one of the main causes of male infertility. In recent years, due to environmental deterioration and lifestyle changes, the incidence of this disease has increased, which has a great impact on male physical and mental health and family harmony (10). How to effectively treat oligoasthenospermia has become a hot spot in clinical research. At present, drug therapy is the main treatment, and as there are many clinically related medications available, the choice of drug regimen is important. According to the treatment method, it can be divided into Chinese medicine treatment and western medicine treatment. Traditional Chinese medicine relies on its overall view and syndrome differentiation system, and treats people according to syndrome and cause. It has certain advantages in treating oligoasthenospermia and has significant curative effect, but the effect is not ideal for severe oligoasthenospermia caused by genetic factors. Western medicine treatment of oligoasthenospermia mainly for the etiology of treatment, clinical use is more widely L-carnitine, vitamin E, and anti-estrogen drugs (Androgens, gonadotropins, anti-estrogen drugs). The clinical efficacy of these drugs alone is often not significant. In the case of multi-drug combination therapy, the clinical use of hormone drugs is limited due to the inexact efficacy and many adverse reactions. At present, there are many studies focusing on the treatment of integrated Chinese and western medicine. This study focused on western medicine.

LC in the human body mainly derives from dietary intake and biosynthesis in the brain, liver, and kidney. LC is mainly distributed in blood and tissues, among which the epididymis has the highest concentration, although it is not synthesized here (11). Studies have shown that when sperm move from the head to the tail of the epididymis, LC can reduce lipid content on the sperm membrane, and increase the ratio of saturated fatty acids, unsaturated fatty acids, cholesterol, and congealed fat, causing changes in membrane composition and structure and maintaining fluidity of the sperm membrane (7). Other reports have shown that LC has an antioxidant effect, can inhibit the production of reactive oxygen species, avoid sperm oxidative damage, and effectively maintain the normal physiological function of sperm (12,13). LC is one of the preferred drugs for the treatment of male infertility, and has a certain curative effect on oligozoospermia, asthenospermia, and teratozoospermia.

Pancreatic kallikrein, also known as pancreatic kallikrein and kallikrein, is an important component of the kinin system. As a proteolytic enzyme, it is commonly found in the pancreas, submandibular glands, and saliva, among which the content is highest in the pancreas. The use of pancreatic kininogenase can increase protein content in the epididymis, clear blood vessels, and improve the quality of sperm (14), and studies have also confirmed that it regulates genital function. After pancreatic peptidogenase enters the genitals, its pharmaceutical effect appears immediately and penetrates every part of the genitals, restoring their vitality, improving sexual function and having an optimizing effect on the penis (15). Pancreatic peptidase has made an important contribution to the treatment of male diseases (14,16). It is mainly used for the treatment of varicocele (17) either alone or in combination with other drugs, and pancreatic propeptidates can be used in the treatment of male sexual dysfunction caused by diabetes. In this study, LC and pancreatic peptidogenase were used to treat male patients with oligoasthenospermia. The results showed that the total effective rate of patients in the combined treatment group was significantly higher than that of the LC group. Sperm density, sperm motility, forward motility, DNA fragmentation degree, and the sperm malformation rate after combined treatment were all better than those in the LC group, suggesting that LC and pancreatic peptidogenase have a positive synergistic effect, which can improve semen quality and enhance the therapeutic effect through different mechanisms.

In conclusion, Trx 2 and Trxr 1 are abnormally expressed in oligoasthenospermia patients, which suggests they play an important role in its occurrence and development. and may be potential protein markers for the disease. However, the specific mechanism remains unknown, and requires further study. LC combined with pancreatic peptidogenase in the treatment of male oligoasthenospermia can effectively promote sperm maturation, enhance sperm motility, and improve semen quality, which has high application value.

Reporting Checklist: The authors have completed the STROBE reporting checklist. Available at https://dx.doi.org/10.21037/tau-21-680

Conflicts of Interest: All authors have completed the ICMJE uniform disclosure form (available at https://dx.doi.org/10.21037/tau-21-680). The authors have no conflicts of interest to declare.

Ethical Statement: The authors are accountable for all aspects of the work in ensuring that questions related to the accuracy or integrity of any part of the work are appropriately investigated and resolved. All procedures performed in this study involving human participants were in accordance with the Declaration of Helsinki (as revised in 2013). The study was approved by Ma’anshan Maternal and Child Health Hospital (No. 2019084). Each participant was informed in detail about the content of the study and their rights, and participated voluntarily. All enrolled patients signed an informed consent form.