Vesical calculi form in the bladder. In relation to the pathogenesis of vesical calculi, with the exception of cases of malnutrition, the disease is secondary to lower urinary tract obstruction, infection, foreign bodies in the bladder, and metabolic diseases (1). Clinically, it mainly manifests as pain and hematuria, and its severity depends on the location, size, and the presence or absence of complications (2).

The principle of clinical treatment is to remove the calculi and prevent them from recurring. Small calculi can be expelled spontaneously through the urethra; however, larger stones that cannot be expelled spontaneously should be treated with surgery (3). Surgical lithotripsy is the traditional suprapubic cystotomy and lithotripsy; however, due to the extensive damage it causes, it is not conducive to patient recovery (4). Extracorporeal lithotripsy is a new method that mainly includes extracorporeal shock wave lithotripsy, hydroelectric shock lithotripsy, ultrasonic lithotripsy, and lithotripter lithotripsy. Holmium laser lithotripsy is a new type of treatment for urinary calculi (5). With yttrium aluminum garnet as the activation medium, the pulsed solid laser device, doped with sensitized ion chromium, energy transfer ion thulium, and activated ion holmium, produces a new type of laser that can vaporize the water between the end of the fiber and the calculus. The energy is then transferred to the calculus to crush it into powder. The water absorbs a great deal of energy, reducing damage to surrounding tissue. Additionally, the holmium laser only penetrates the body tissue by 0.4 mm, and thus has a high level of safety (6). However, to date, very little research appears to have been conducted on the efficacy of holmium laser lithotripsy on vesical calculi. To confirm the efficacy of this technology, relevant randomized control trials (RCTs) were retrieved, and a meta-analysis was conducted to undertake a systematic analysis. We present the following article in accordance with the PRISMA reporting checklist (available at https://dx.doi.org/10.21037/tau-21-563).

Inclusion criteria: (I) the research subjects were patients who had been clinically diagnosed with vesical calculi; (II) the articles were RCTs in the English language; and (III) patients in the experimental group underwent holmium laser lithotripsy, and those in the control group underwent pneumatic lithotripsy (the baseline data of the 2 groups had to be comparable; (IV) the patients could be treated by conservative treatment; and (V) the evaluation indicators included patients’ satisfaction after surgery and the occurrence of adverse reactions.

Exclusion criteria: (I) a RCT had not been conducted; rather, the article was about a retrospective study, case report, or cohort study; (II) the research subjects were animals; (III) the article was unpublished, such as a degree thesis, or was in a language other than English; (IV) patients in the experimental group had undergone a cystectomy, or another conservative treatment; (V) the patients had other diseases; and/or (VI) the research data was incomplete.

The PubMed, Embase, Medline, Ovid, Springer, and Web of Sciences databases were searched since their establishment to December 31, 2020, with “Holmium laser lithotripsy,” “Pneumatic lithotripsy,” “Urology Surgery,” and “Vesical Calculi,” used as search terms.

After the articles were retrieved, NoreExpress 3.2 was used to identify duplicates, which were then removed. Next, the 2 researchers read the titles and abstracts to eliminate articles that obviously did not meet the inclusion criteria.

The following data were collated: (I) the title and the name of the first author (only 1), the publication time, and the research content; (II) the age of the patients, the sample size, and baseline comparability; (III) the research plan, intervention methods, and the anti-bias measures; and (IV) the outcome indexes and data.

The risk of bias was assessed using the Cochrane Handbook for Systematic Reviews of Interventions 5.0.2. STATA11.0 software was used to count the included literature. RevMan5.3 was used to perform the meta-analysis. Relative risk (RR) was used as the effect size for the binary variables in the count data, and the 95% confidence interval (CI) was calculated. The I2 test was used to evaluate the heterogeneity of the included literature. If I2 was >50%, a random-effects model (REM) was used; if I2 was <50%, a fixed-effects model (FEM) was used. The combined effect size test adopted a U-test and 95% CI. The U-test result was expressed as a P value; a P<0.05 was the threshold for significance.

Initially, a total of 432 references were identified, among which 112 studies were from PubMed, 58 were from Embase, 42 were from Medline, 51 were from Springer, 28 were from Ovid, and 141 were from Web of Sciences. Next, NoteExpress3.2 was used to exclude 222 duplicates. Subsequently, the 2 experts read the title and the abstract of each article to exclude those that obviously did not meet the inclusion criteria. After this step, 72 studies were left. After the 2 experts read the full text of each of the 72 articles, 10 studies remained, which were included in the meta-analysis. All articles described RCTs that had been published between 2000–2020. In total, the 12 studies comprised 1,642 research subjects (3-14) (see Figure 1 and Table 1). 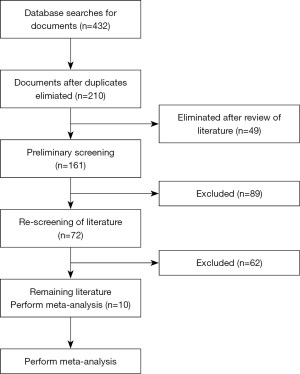 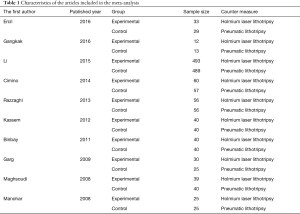 There were 3 studies analyzing the length of hospital stay. The heterogeneity test results (I2=0%, P=0.42) indicated no heterogeneity; thus, the FEM was used. The combined effect size was MD =−0.26; 95% CI, −0.54 to 0.02; Z=1.85; P=0.06, which suggested that the hospital stay of patients treated by holmium laser lithotripsy was shorter versus the control group (Figure 5).

As shown in Figure 13, hospital stay, calculus removal rate, postoperative urinary tract infection, mucosal damage, bladder perforation, residual calculi rate, hematuria, and abdominal pain were basically distributed within the CI, and article bias was low; however, the scattered points of surgery time were outside the CI, suggesting that the included articles had a certain publication bias. 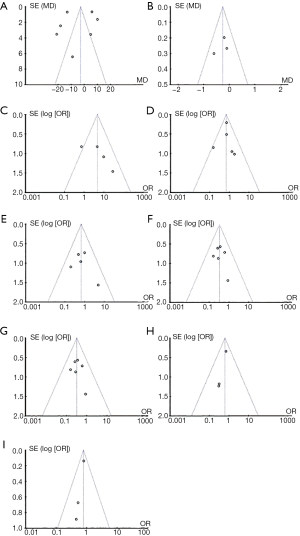 Vesical calculi can be divided into primary and secondary vesical calculi (15). The former refers to stones formed in the bladder that mostly arise due to malnutrition and occur more frequently in children (16). The latter refers to stones from upper urinary tract or secondary to lower urinary tract obstruction, infection, bladder foreign body, or neurogenic bladder . In developed countries, vesical calculi mainly occur in elderly men who often suffer from prostatic hyperplasia or urethral stricture (17). Conversely, in developing countries, the disease is more common in children and less common in women than men. If not treated in time, it will cause urinary tract infection and obstruction, resulting in poor drainage, and even leading to kidney failure in severe cases. Errors can occur in traditional lithotripsy treatments, and there are always residual stones that can cause a secondary blockage. Further, as the recovery effects are poor, it has limited clinical use (18). Developments in medical technology led to the introduction of the holmium laser lithotripsy treatment method, which has significantly improved the therapeutic effects and safety of patients, and reduced patients’ adverse reactions after the surgery (19-21).

A total of 10 studies were included. It was found that the experimental group had shorter the surgery time and hospital stay, and a higher calculus removal rate. Studies have shown that, holmium laser lithotripsy demonstrates good safety and has been extensively used (22).

Extracorporeal shock wave lithotripsy uses hydroelectric or electromagnetic shock wave generators to emit high-energy shock waves that penetrate the human body, and crush the stones. The stone fragments are naturally discharged. However, the shock waves also cause tissue damage, such as the destruction of glomeruli and tubules, and ureteral stenosis (23). Similarly, when pneumatic lithotripsy is used to treat middle and lower ureteral calculi, it is easy to flush stones back into the upper ureter or kidney, and as the method can only be used under rigid ureteroscopy, it cannot be used to treat upper ureteral calculi and kidney stones (24). Compared with the 2 methods mentioned above, holmium laser lithotripsy demonstrates better therapeutic effects. As the stones rarely move during the lithotripsy process and the backlash rate is very low, its efficiency is high (25). The cystoscopy, ureteroscopy, and percutaneous nephroscope can directly crush the stones without causing tissue damage. Additionally, the holmium laser fiber is flexible and can not only be inserted through a rigid ureteroscope, but also through a flexible ureteroscope for lithotripsy (26). Thus, it can effectively crush stones in any part of the body.

In this meta-analysis, a total of 10 references were included, comprising 1,642 patients with vesical calculi. The investigation confirmed that compared to pneumatic lithotripsy, holmium laser lithotripsy significantly reduces the incidence of postoperative adverse reactions, shortens surgery time, and lowers the calculus removal rate of patients, and thus demonstrates superior capabilities in treating vesical calculi. However, this study had some limitations that should be noted. First, some articles exhibited large publication biases. Second, the sample size was small, which may have reduced the power of the meta-analysis results. In the future, a high-quality study with an expanded sample size needs to be conducted to further verify the efficacy of holmium laser lithotripsy in the treatment of vesical calculi.

Reporting Checklist: The authors have completed the PRISMA reporting checklist. Available at https://dx.doi.org/10.21037/tau-21-563

Conflicts of Interest: All authors have completed the ICMJE uniform disclosure form (available at https://dx.doi.org/10.21037/tau-21-563). The authors have no conflicts of interest to declare.