Hydropenia may accelerates the progression of orthotopic bladder cancer induced by N-methyl-N-nitrosourea by increasing the expression levels of AQP1, AQP3, and AQP4

Bladder cancer (BCa) ranks as the 6th most commonly occurring malignancy globally, and is the 4th most frequently diagnosed malignancy among males in developed countries (1). In the majority of cases (70%), BCa does not invade the muscle of the bladder, and transurethral resection followed by intravesical instillation of chemotherapy is considered as the primary treatment (2). Although numerous studies have attempted to uncover the mechanisms of BCa tumorigenesis and progression, their results have been inconsistent.

Water was first reported to be transported across epithelia in erythrocytes by Agre et al. in the 1980s (3). In subsequent studies, water-transport channels, referred to as aquaporins (AQPs), were also discovered in renal epithelial cells (4,5). The AQP family comprises transmembrane proteins which control the passage of water or water together with other small, uncharged molecules (e.g., urea and glycerol) along hydrostatic and osmotic gradients. The expression of AQPs is ubiquitous in cells of humans, animals, and bacteria, and the essentiality of AQPs for cellular functions has been recognized (6). In mammals, there are 13 AQPs localized in particular tissues (7). Research has revealed AQPs to play roles in multiple pathological conditions as well as their promise as therapeutic targets (8). It has been strongly speculated that AQPs participate in oncogenesis, namely in the tumor angiogenic process and cell migration (9). For example, one study observed a relationship between AQP3 knockdown and an increase in the migratory and proliferative ability of gastric cancer cells (10).

Here, we aimed to explore the role of hydropenia in the tumorigenesis of BCa, as well as to assess the expression levels of AQP1, AQP3, and AQP4 in bladder tissues from hydropenic and N-methyl-N-nitrosourea (MNU)-treated rats.

We present the following article in accordance with the ARRIVE reporting checklist (available at http://dx.doi.org/10.21037/tau-21-273).

Construction of the BCa rat model

The rats were housed under a 12-hour light-dark cycle and given ad libitum access to food and water. The rats were anesthetized through the delivery of 3% isoflurane in a closed chamber. After transfer of the rats to a nose cone, the surgical area was prepared, and the urethra was placed into a 20-gauge angiocatheter. Then, 0.30 mL 1 M sodium citrate (pH 6.0) with MNU (1.5 mg/kg) was instilled, the catheter was removed, and the rats were kept sedated continuously for 45 minutes to avoid the occurrence of spontaneous micturition and to enable absorption. As previously described, MNU was instilled once a week for 4 weeks (11). The hydropenia and MNU + hydropenia group was given 2/3 of the amount of water given to the control group. At week 8, the rats were sacrificed, and the pathological alterations and the expression levels of AQPs were assessed.

The bladder tissues were collected from the rats and subjected to 24-hour immersion in a solution containing 4% paraformaldehyde (Dulbecco’s Phosphate Buffered Saline; Mediatech, Inc., Herndon, VA, USA) for fixation. Each specimen underwent rinsing in phosphate-buffered saline, followed by dehydration in a graded ethanol series and paraffinization. The specimens were then sectioned at a thickness of 5-µm, after which hematoxylin and eosin (HE) staining was performed. Finally, a light microscope was used to evaluate each tissue section.

Total RNA was isolated using TRIzol reagent (Invitrogen, USA), and then used for cDNA synthesis with the help of PrimeScript RT Master Mix kit (RR036A; Takara). Next, the cDNA was applied to PCRs detection with 2× SYBR Green PCR Mastermix (Solarbio, Beijing, China) in 7500 Real-Time PCR System (Applied Biosystems, USA). The reactions were as follows: 95 °C for 1 min, 39 cycles including 95 °C for 15 s and 60 °C for 1 min. The relative expressions of mRNA were calculated based on the 2−∆∆Ct method (12). Primers were shown in Table 1.

Following culture as indicated, protease inhibitor cocktail-containing RIPA lysis buffer was used to lyse the rat bladder tissues. Centrifugation of cell lysates was carried out at 3,500 rpm for 10 minutes at 4 °C. The resulting supernatant was used for protein extraction, and a BCA assay kit (Sigma-Aldrich) was employed for the determination of protein concentration. Sodium dodecyl sulfate–polyacrylamide gel electrophoresis was used to separate proteins (25 µg) before their transfer onto a polyvinylidene difluoride membrane. After blocking with 5% nonfat skim milk, the membrane was incubated overnight with primary antibodies against AQP1 (Chemicon, Temecula, CA, USA), AQP3 (Abcam, Cambridge, MA, USA), AQP4 (Abcam), and glyceraldehyde 3-phosphate dehydrogenase (GAPDH) (Sigma, St. Louis, MO, USA) at 4 °C. Next, following the addition of horseradish peroxidase-conjugated secondary antibody, the membrane was subjected to incubation once more. After washing, the protein bands were visualized with an enhanced chemiluminescent detection system (Thermo Scientific, Carlsbad, CA, USA).

During of the experiment, most of the rats showed slightly poor spirit and decreased appetite. The weights of rats in MNU, hydropenia and MNU + hydropenia groups were decreased as compared with the control group, but the difference was not statistically significant (P value >0.05). The relevant characteristics were listed in Table 2.

Table 2 Characteristics of rats in each group
Full table

The tumorigenic rate was 100%, with all MNU-treated rats developing tumors. Of the tumors, 5 were large (diameter, 0.5–1.0 cm), 10 were medium (diameter, 0.2–0.5 cm), and 5 were small (diameter <0.2 cm) in size. The tumors were nodular and cauliflower shaped, with multiple satellite focus, and were accompanied by bleeding, ulcers, stones, and residual urine. The tumor volume in the MNU + hydropenia group was significantly greater than that in the MNU group. The results of HE staining showed that the bladder mucosa of the rats was incomplete, with a large amount of necrotic tissue and obvious leukocytic infiltration. Noticeably, hydropenia exacerbated the pathological changes induced by MNU administration (Figure 1). 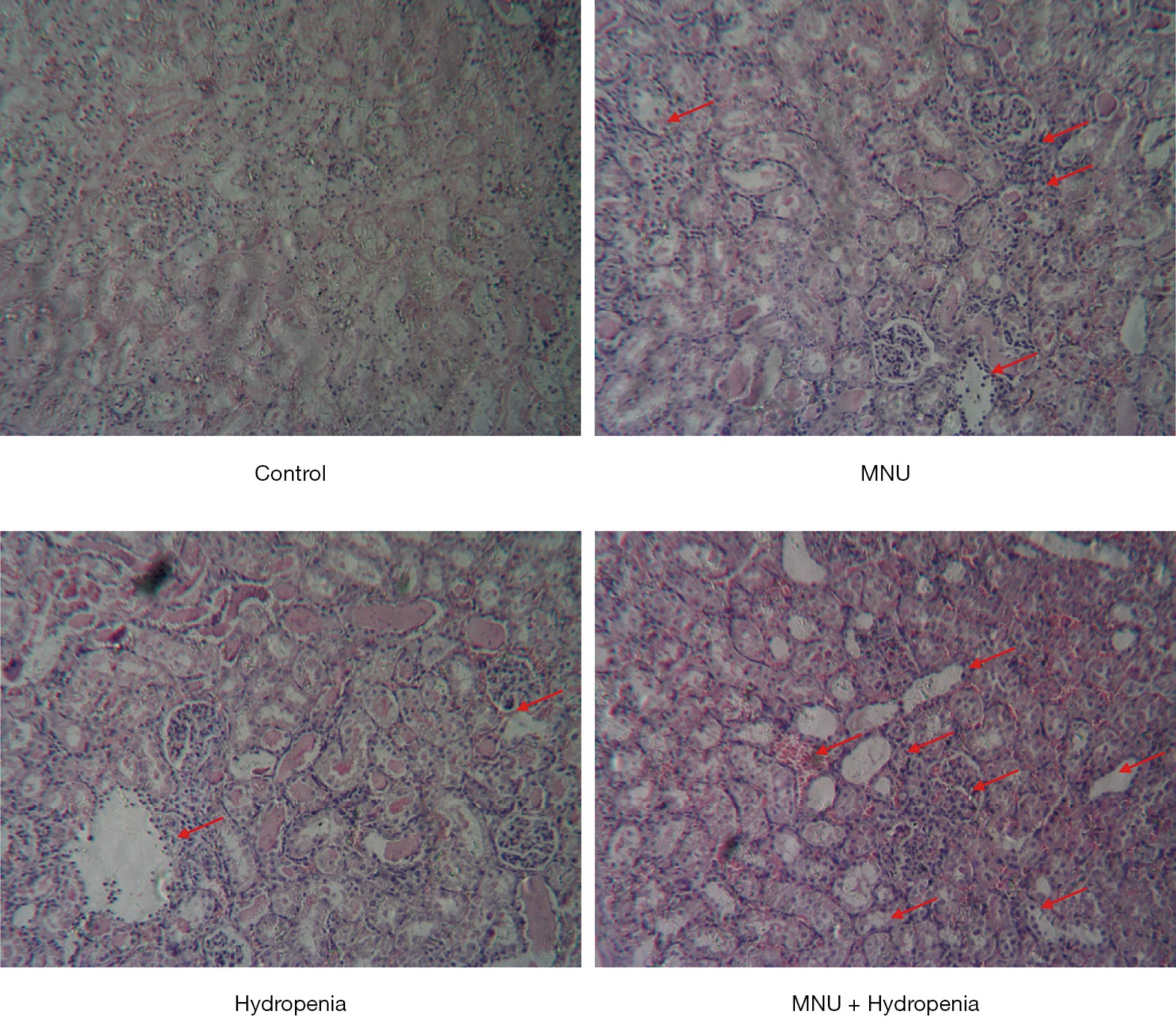 More and more research has demonstrated the importance of AQPs to cancer progression. For example, Deb et al. (13) found AQP1 to be closely associated with tumor angiogenesis, indicating it to potentially be a predictive indicator of tumor development and prognosis. Liu and colleagues (14) found the expression levels of AQP1 in normal bladder tissues and bladder uroepithelium cell carcinoma specimens to be 2.175±0.693 and 3.689±0.701, respectively, with a high expression of AQP1 being closely linked to a higher tumor grade and stage, lymph node metastasis, and recurrent disease. Their findings demonstrated the potential significance of AQP1 to guide bladder carcinoma diagnosis and treatment. Furthermore, Zhang et al. (15) reported that selective inhibition of AQP1 enhanced the sensitivity of J82 BCa cells to mitomycin C. Moreover, AQP3, AQP4, AQP7, AQP9, and AQP11 transcripts were detected in both freshly isolated urothelial cells and cultured urothelial cells. At the protein level, an unequivocal expression of AQP3 was also observed, with immunohistochemistry revealing intense staining of cell membranes in both the basal and intermediate layers of normal bladder urothelial tissue (10). Rubenwolf et al. (16) detected the expression of AQP3 and AQP9 transcripts in low-grade RT4 and RT112 BCa cells; however, they were not detected in high-grade T24 cells. Meanwhile, although there was an absence of AQP4 messenger RNA in RT4 cells, its expression was observed in RT112 and T24 cells. All of these findings point toward AQPs potentially being players in BCa progression.

The current study explored the role of hydropenia in the progression of BCa and assessed the expression levels of AQP1, AQP3 and AQP4 in the bladder tissues of hydropenic and/or MNU-treated rats. We found the bladder mucosa of the rats to be incomplete, with a large amount of necrotic tissue and obvious leukocytic infiltration in the MNU group compared to the control group. Noticeably, hydropenia exacerbated the pathological changes induced by MNU administration. The tumor volume in the MNU + hydropenia group was significantly larger than that in the MNU group. It was revealed that hydropenia accelerated the pathological alterations and contributed to the progression of tumorigenesis.

Although it was considered that the urothelium was impermeable to water and solutes, but recent researched showed that urine constituents could be reabsorbed during urinary tract transit and storage (17). Our results that hydropenia induced the expression of AQP1, AQP3 and AQP4 in bladder tissues supported this conclusion. Through the upregulated expression of AQPs, hydropenia was thought to further induce the cell liquid permeation and reabsorption, even the transport of MNU as assumed. The changes of intravesical and intracellular concentration of MNU might accelerated the tumorigenesis.

In conclusion, this study has demonstrated that hydropenia exacerbates MNU-induced pathological alterations in rats with orthotopic BCa by increasing the expression levels of AQP1, AQP3, and AQP4, which may be a possible mechanism of the occurrence of BCa.

Reporting Checklist: The authors have completed the ARRIVE reporting checklist. Available at http://dx.doi.org/10.21037/tau-21-273

Conflicts of Interest: All authors have completed the ICMJE uniform disclosure form (available at http://dx.doi.org/10.21037/tau-21-273). The authors reported this study was supported by: (I) Fund of Shanghai Ruijin Hospital North (2016ZY07) and (II) Youth Talents Plan of Shanghai Ruijin Hospital North (2019RCPY-B12), of which funders had no role in this study. The authors have no other conflicts of interest to declare.

Ethical Statement: The authors are accountable for all aspects of the work in ensuring that questions related to the accuracy or integrity of any part of the work are appropriately investigated and resolved. All animal experiments were performed in accordance with the guidelines for animal care and approved by Animal Care and Use Committee of Shanghai Ruijin Hospital.