Renal cell carcinoma (RCC) represents 2–3% of malignant cancers with an increasing incidence worldwide, especially in western countries (1). Today immunotherapies represents the main option for first line treatment (2). However, targeted therapies (TT) [anti-vascular endothelial growth factor (VEGF) therapies] remain essential for the subsequent lines in the treatment sequence of mRCC patients. The efficacy and safety of these drugs were largely documented in pivotal trials. Different studies have suggested that age remains a risk factor and most of diagnoses are made between 60 and 70 years old (3).

Elderly patients represent a significant proportion of the RCC population as 331,582 prevalent cases older than 70 in 2018 (4). Regarding metastatic disease, 20–30% of all RCC are metastatic (mRCC) at diagnosis while 20% of patients with initially localized RCC will encounter metastatic recurrence during follow-up. Specific data regarding the management of TT in elderly patients are scarce (5). Whereas they represent a particular population with an increased incidence of comorbidities as chronic kidney disease (CKD) or liver dysfunction, as well as polymedication. These parameters may impact the efficacy and safety of TT in this population as well as limit the use of immunotherapies (6). A better understanding of the specificities regarding the efficacy and toxicity of TT in the elderly population could be helpful in order to improve the management of mRCC in this population. The aim of this retrospective study was to assess efficacy and safety of sunitinib and sorafenib used as first-line TT in patients >70 years old compared to younger patients.

All consecutive mRCC patients >18 years receiving first line TT treatment by sunitinib or sorafenib for mRCC from January 2006 to November 2017 were included in a unique center. All clinical and tumor baseline characteristics were retrospectively collected for each patient, including toxicity related to treatment. Sunitinib was orally administered for 4 consecutive weeks, followed by a 2-week break (dose of 50 mg/day), whereas sorafenib was orally administered continuously at 400 mg twice daily. Patients underwent physical examination associated with blood cell count and serum chemistry tests at baseline and on days 14 and 28 of the first treatment cycle and at least monthly during TT exposure. Results were analyzed according to normal institutional values. For patients treated by sunitinib, an electrocardiogram (ECG) was performed at baseline. All the toxicities were graded according to NCI-CTCAE, version 3.0. When grade 3 non-hematological toxicity occurred, treatment was interrupted until toxicity was resolved and the dose was reduced thereafter by one level at the physician’s discretion. Treatment was definitively stopped in case of grade 4 non-hematological toxicity. Toxicity was classified as ‘mild to moderate’ corresponding to grade 0 to 2 toxicity or ‘severe’ corresponding to grade 3 to 4 toxicity. Baseline comorbidities were collected and analyzed according to the Charlson score (8). The prognostic score of each patient was calculated from the 6 clinical and biological data composing the International Metastatic Renal Cell Carcinoma Database Consortium model (IMDC) (9). These data were Karnofsky performance status (KPS), time from diagnosis to first-line TT, haemoglobin concentration, neutrophil count, platelet count, and serum calcium concentration. Follow-up was based on a physical examination and CT-scan performed every 3 months. Response was evaluated using Response Evaluation Criteria in Solid Tumors (10). There were no missing data for any of the patients included in the study. The study was conducted in accordance with the Declaration of Helsinki (as revised in 2013). The study was approved by institutional ethics committee of CHU de Rouen (No.: E2021-22) and individual consent for this retrospective analysis was waived.

Patients were divided into two groups according to the age with a cut-off at 70 years old. This cut-off was previously used in analysis of elderly sunitinib-treated patients or sorafenib-treated patient with mRCC (11-13). Patients characteristics were compared between the age groups using Chi-2 test as appropriate. Overall survival (OS) was defined as time from treatment initiation to date of death because of any cause or censored at the last follow-up. Progression-free survival (PFS) was defined as time from treatment initiation to date of disease progression according to the RECIST criteria or clinically. Median PFS and OS for comparison of sunitinib or sorafenib-treated patients aged 70 or >70 years were estimated by Kaplan-Meier method and compared using log-rank test. The limit of significance was fixed at P value less than 0.05. Statistical analyses were carried out using Medcalc version 12.0 (Medcalc software bvba, Ostend, Belgium). 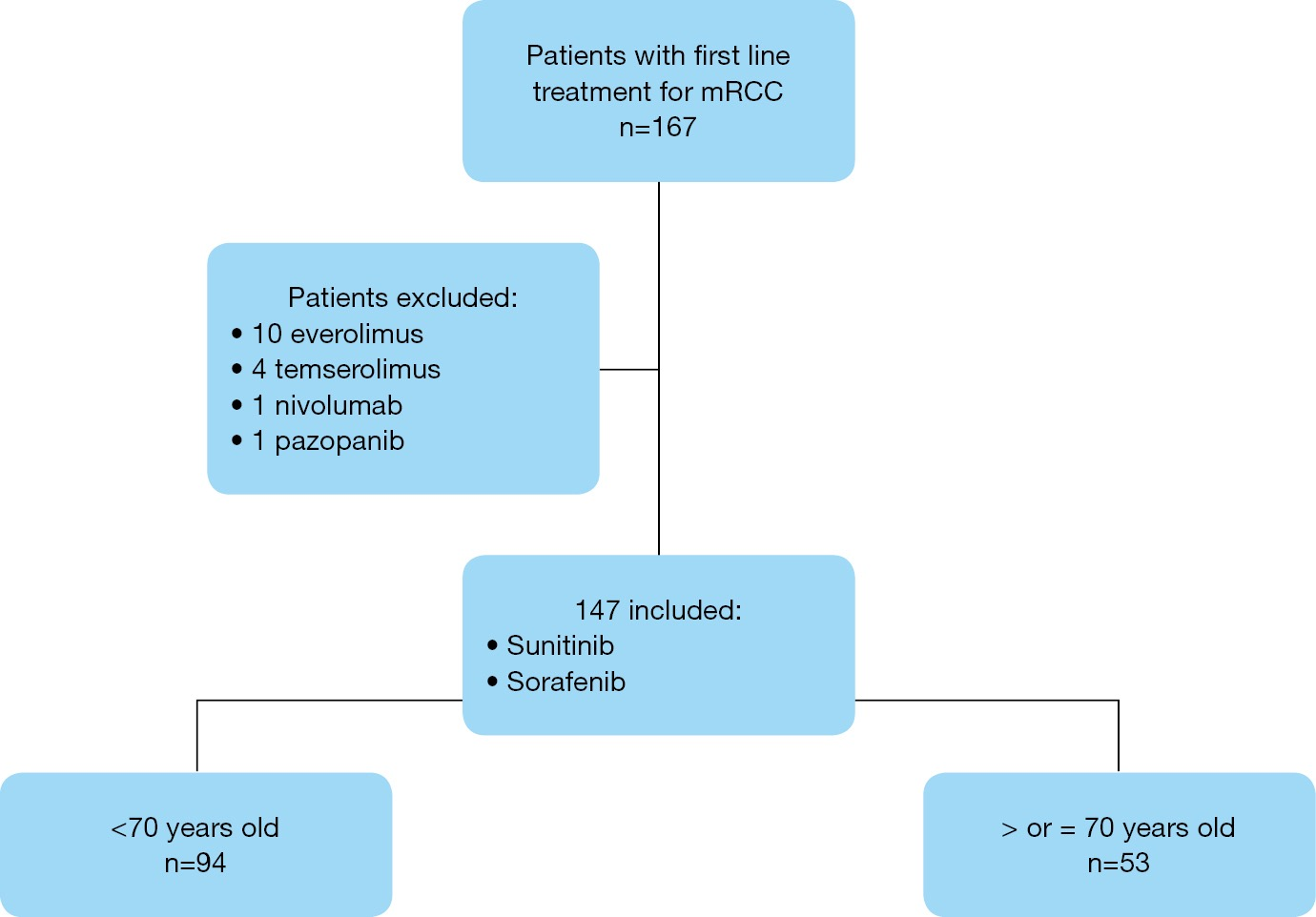 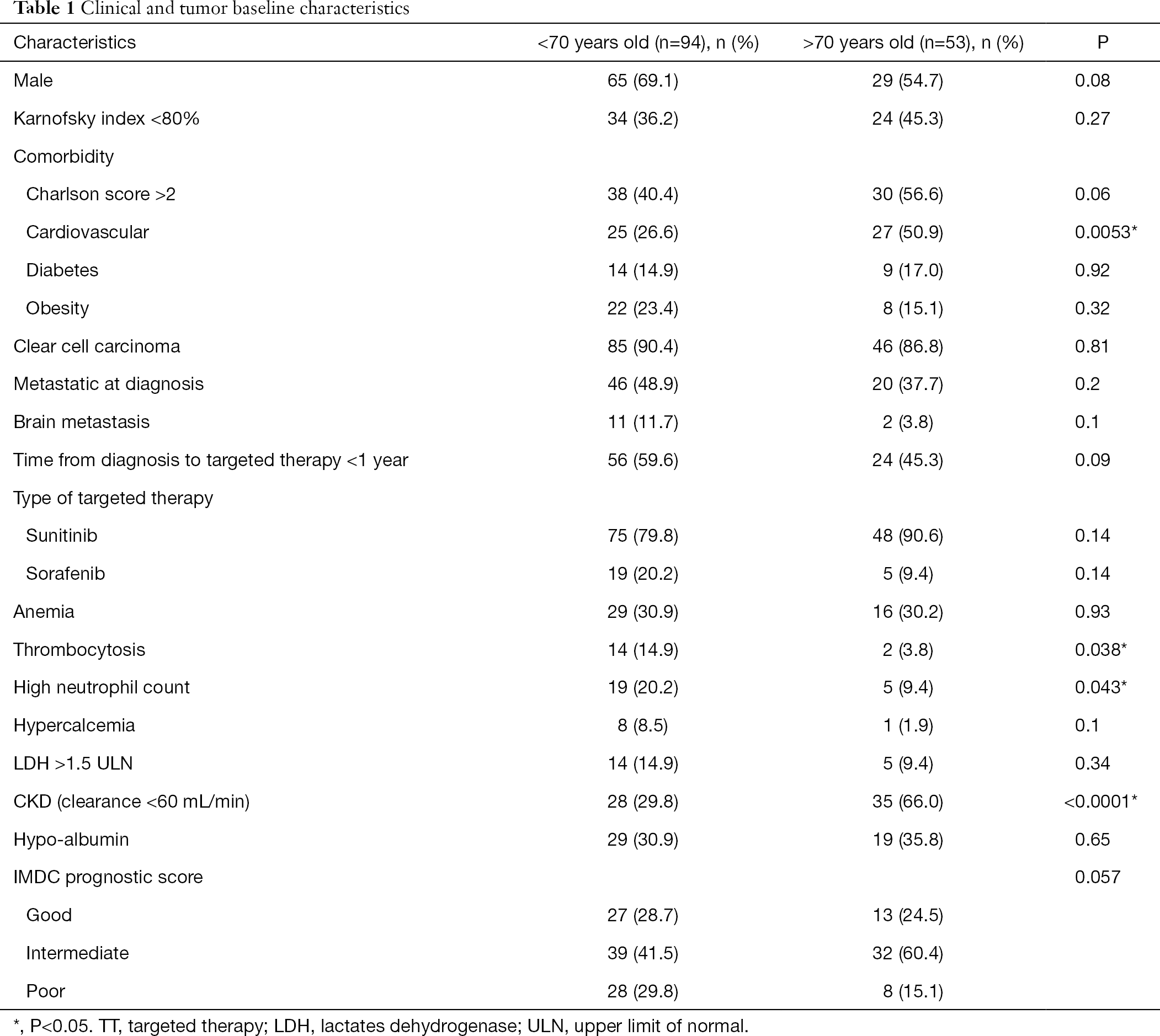 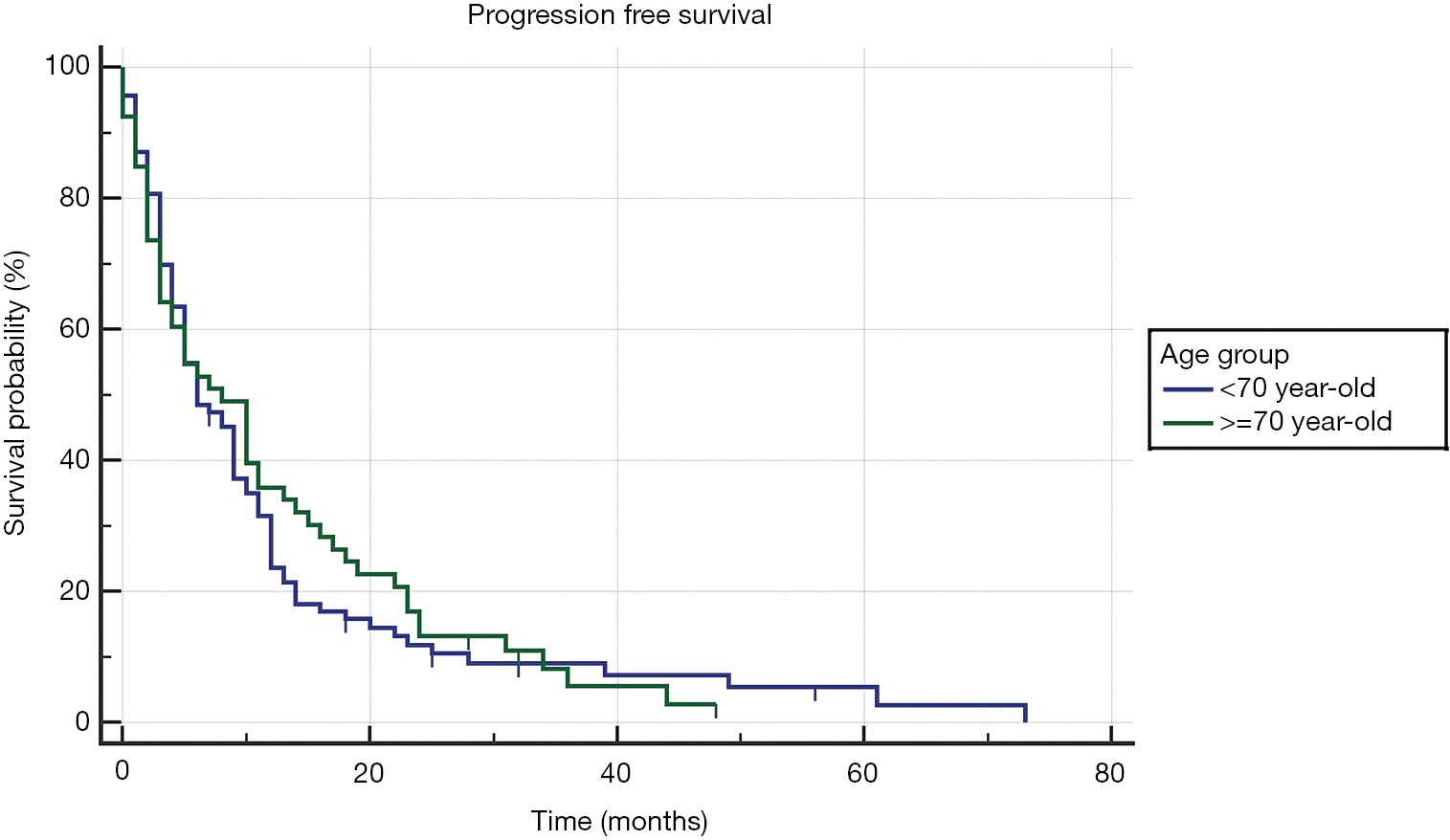 Figure 2 Relationship between progression probability and time according to the age. 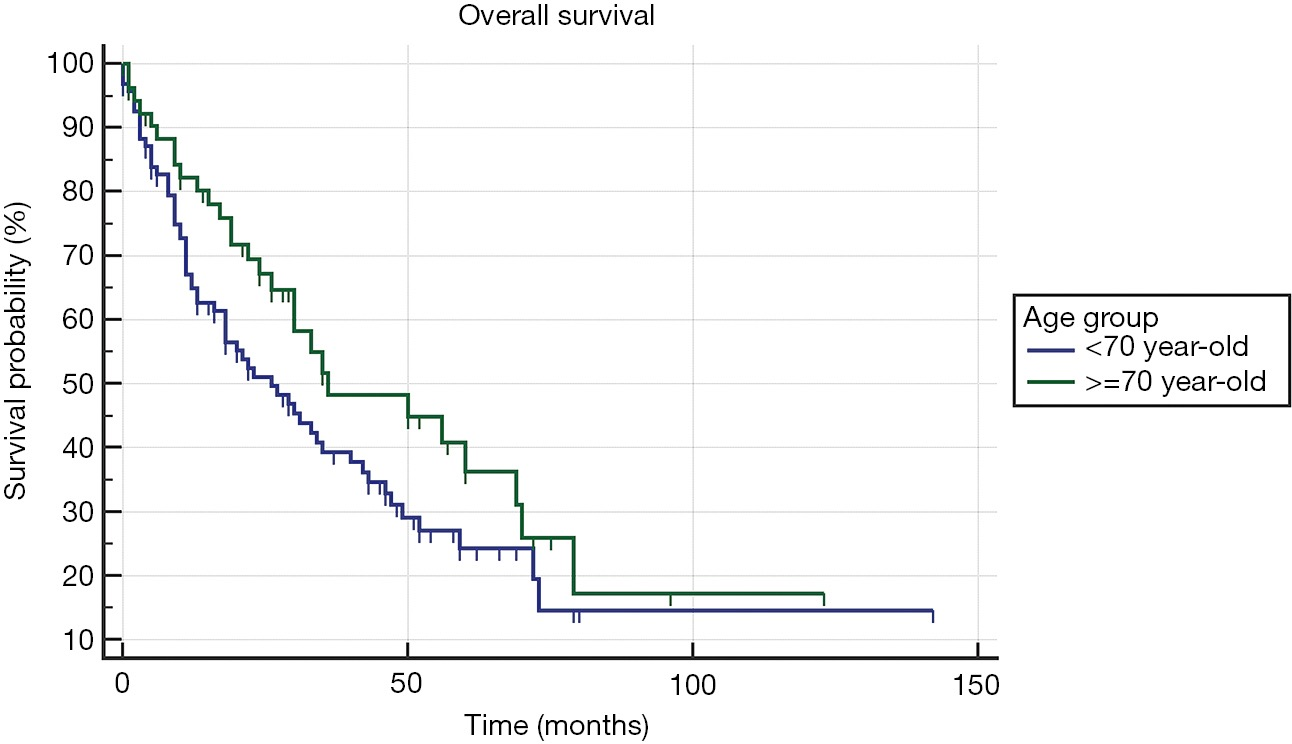 Figure 3 Relationship between survival probability and time according to the age.

A total of 80 patients (54.4%) encountered one or more severe treatment-induced toxicity event; 79.5% of the major toxicity events occurred during the first five months following treatment-initiation (Figure 4). The incidence of severe induced toxicity was found with a trend to be more frequent among elderly patients: 34 patients (64.2%) vs. 46 patients (48.9%) P=0.07. For 50 patients (34%) the first line TT was definitely stopped due to treatment-induced toxicity. A significant difference between the two groups was found for the rate of treatment discontinuation due to toxicity with respectively 22 patients (23.4%) in the younger group vs. 28 patients (52.8%) in the elderly group (P=0.0005). Finally, results were similar in the 2 groups regarding to the type of induced toxicities. Especially, no significant difference was found for dermatologic and digestive toxicity as well as fatigue and hypertension (Table 2).

Table 2 Detailed toxicities according to the age
Full table

As mentioned, literature data about the use of tyrosine kinase inhibitor (TKI) for the treatment of mRCC in elderly patients is scarce. study emphasized the fact that despite high cancer frequency in this population there is a lack of data as well as a fear of side effect and a minimization of potential benefit (5). Data come from clinical trials involving a selected population not representative of elderly population. In this study we report further informations about this topic. Especially we showed that the efficacy and the safety of sunitinib and sorafenib for patients older than 70 could be comparable to younger patients as we found no difference in terms of OS and PFS as well as toxicity.

An evolution in the management of toxicities could be underline, with better results especially in elderly population. These results were close to those previously reported on sunitinib or sorafenib treatment in this elderly population. In this context, Hutson et al. found no difference regarding the efficacy of sunitinib in terms of survival between age groups similar to ours (11) (Table 3). Similarly, Poprach et al. reported more recently comparable results in a retrospective cohort of 1,315 patients treated with sunitinib (14). In addition, using a different age cut-off did not suggested different results: using a cut off age at 65 years old, Gore et al. also described similar survival between the 2 groups with sunitinib (15). Regarding the molecule used, our cohort was mainly based on sunitinib 83.7%. Only 16.3% of the patients received sorafenib as first line treatment, this was due to a temporary authorization to use sorafenib in 2006 in this indication at our institution while waiting for sunitinib to be available from mid-2007. Sunitinib was then used as the standard treatment for first line mRCC. Literature data regarding the use of Sorafenib in elderly patients are even rarer and mainly issued from second line treatment studies. Eisen et al. reported similar outcomes for sorafenib as a second-line treatment between younger and older patients (>70 years) (12). Similar results were also found by Bukowski et al. and Procopio et al. (13,16) (Table 3). 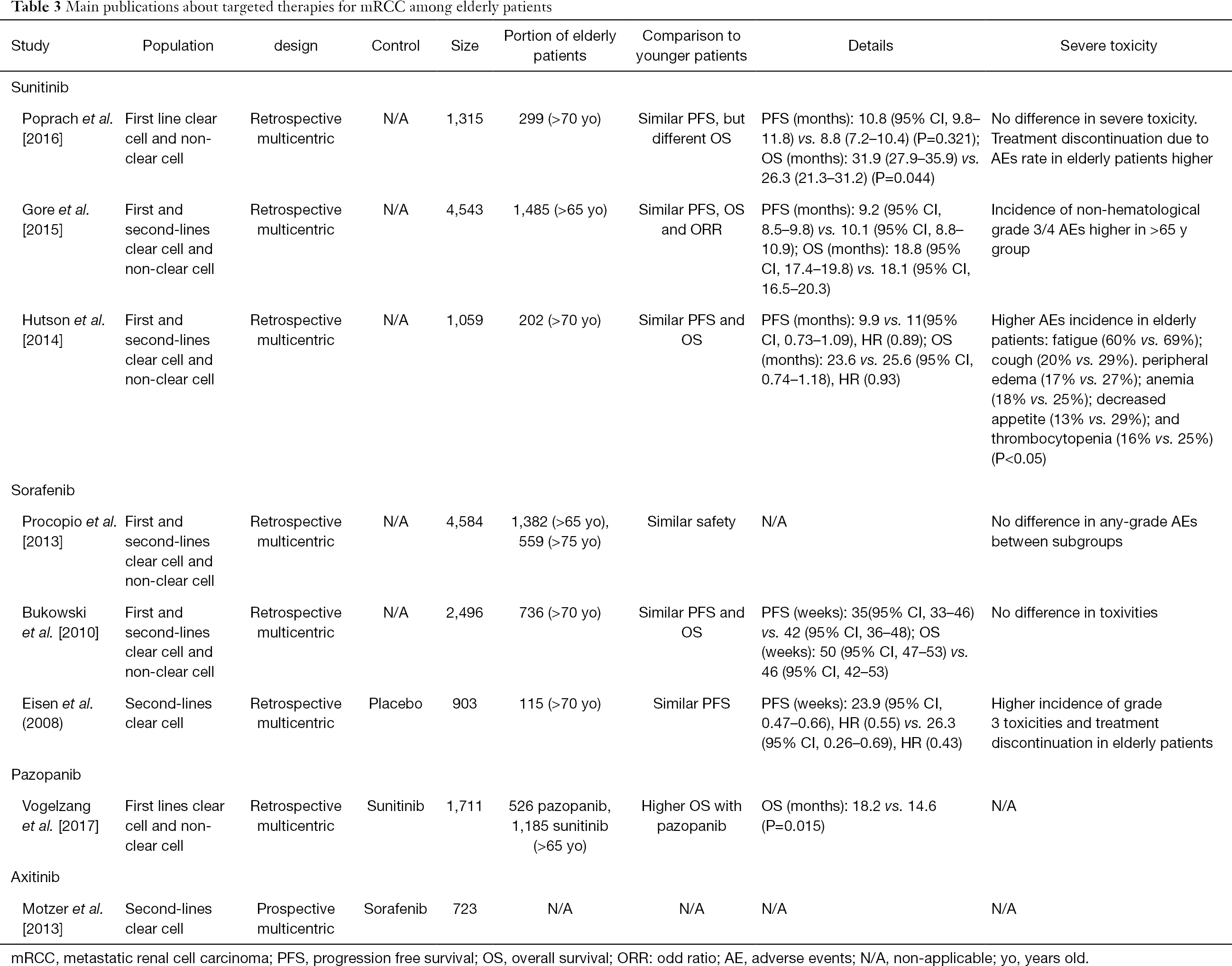 Our results showed no significant difference in terms of incidence of treatment-induced toxicity; 54.4% of our population encountered severe toxicity events with a majority of them occurring during the first five months following treatment initiation (Figure 3). A trend was noticed with a higher incidence of these events among elderly patient than younger patients, respectively 64.2% vs. 48.9% (P=0.07). This trend could be related to the higher rate of CKD in the older group. We previously reported the role of GFR less than 60 in mRCC as risk factor of TT-induced toxicities (17). Moreover, severe TT-induced toxicities were identified as an independent prognostic factor of TTF and OS. In addition, it is interesting to note that severe toxicity was significantly more likely to cause treatment discontinuation in the elderly group (52.8% vs. 24.4%, P=0.002). This suggest that even if the severe toxicity is not significantly more frequent in the elderly group, its occurrence significantly impacts more this population. This fact highlights the potential need to be cautious in the management of these drugs for this fragile population. The improvement made during the last years regarding the management of tolerability of anti-VEGF agents, inherited from the more than a decade experience of the use of these drugs are of real interest to optimize the tolerability of the treatment for the elderly patients. Hutson et al. reported comparable safety results between <70 and >70 years old groups (11). Nevertheless, they noticed some exceptions as a higher incidence of fatigue, cough, peripheral edema, anemia, decreased appetite, and thrombocytopenia in older patients (Table 3). Similarly, safety results of Poprach et al. and Gore et al. were not different between the age groups (14,15). This last one observed a higher incidence for non-hematological grade 3–4 adverse events (AEs) in >70 years old group (Table 3). Regarding sorafenib-related toxicity the results reported in the literature were rare but consistent. Although Eisen et al. observed higher grade 3 toxicity and treatment-discontinuation rates, no significant difference was described between younger and older patients (12). These results were in agreement with two retrospective studies of Procopio et al. and Bukowski et al. finding no difference regarding treatment-induced toxicity (13,16) (Table 3). In Table 3 we reported literature data obtained from studies assessing the outcomes of anti-VEGF agent in elderly patients (18,19).

Our results confirmed the recent review from Neuzillet et al. regarding the specificities of cancer management in elderly patients. This review was also highlighting the possibility to safely use anti-VEGF in the elderly subject at the same doses as in the young subject with increased vigilance for side effects (20).

The main limitation of our study was of course its retrospective design with a small population because of unicentric characteristic. It was a trend regarding the overall survival, however, the comparison of the OS between two groups with different ages is difficult since the baseline life expectancy is not comparable between the groups. Cancer specific survival would have been more relevant, however, due to the retrospective nature of the study, this information was not available to allow us to assess it.

Reporting Checklist: The authors have completed the STROBE reporting checklist. Available at http://dx.doi.org/10.21037/tau-20-1481

Conflicts of Interest: All authors have completed the ICMJE uniform disclosure form (available at http://dx.doi.org/10.21037/tau-20-1481). The authors have no conflicts of interest to declare.

Ethical Statement: The authors are accountable for all aspects of the work in ensuring that questions related to the accuracy or integrity of any part of the work are appropriately investigated and resolved. The study was conducted in accordance with the Declaration of Helsinki (as revised in 2013). The study was approved by institutional ethics committee of CHU de Rouen (No.: E2021-22) and individual consent for this retrospective analysis was waived.