Lower urinary tract symptoms (LUTS) represent a bothersome constellation of symptoms that are common in the urologic patient population. Aging has been implicated as an independent risk factor for development of LUTS in both men and women. Vascular diseases common to aging, such as atherosclerosis, may play a role in the development of chronic bladder ischemia (1). It has been demonstrated that LUTS increases with age, and these patients have decreased bladder blood flow compared to younger asymptomatic patients (2-4). A suggested mechanism has been proposed in which prolonged ischemia leads to detrusor overactivity (DO), followed eventually by detrusor underactivity (5-8). Additionally, new mechanisms for treatment of LUTS, based on the etiology of pelvic ischemia, have been emerging and are a current area of active research (9-14).

Molecular mechanisms of ischemic insult causing deficits in bladder function are incompletely elucidated. Animal experiments have demonstrated that chronic bladder ischemia leads to detrusor denervation, upregulation of proinflammatory cytokines such as HIF-1ɑ, increased collagen deposition, and generation of reactive oxygen species (ROS) (15-20). Blood flow to the bladder is supplied by the paired superior and inferior vesical arteries. Classic teaching dictates that loss of one source of blood supply to the bladder would be inconsequential owing to robust collateral circulation. However, there is a paucity of literature to support this. Rabbit studies of acute unilateral bladder ischemia have demonstrated short term changes in gene expression similar to that seen in BOO, detrusor hyperreactivity and loss of compliance (21-23).

Deciphering the distribution of perfusion within the bladder may be important in underactive bladder pathophysiology that occurs in the initial stages of chronic ischemia. The aim of this study is to provide visual evidence that adequate bladder perfusion is maintained by a segmental vascular supply. We present the following article in accordance with the ARRIVE reporting checklist (available at http://dx.doi.org/10.21037/tau-20-1467).

As previously described (24-28), bladders for this study were procured from local abattoirs immediately after slaughter. Experiments were performed and granted exempt status after review by the Virginia Commonwealth University institutional care and use committee because the animals were already deceased at time of tissue harvest. Briefly, the entire urinary tract was removed en bloc with intact vasculature to the aorta and vena cava. The vasculature was flushed with a heparinized Krebs Henseleit solution. The kidneys and any excess tissue were removed leaving the ureters, bladder, urethra and vasculature intact, which were then placed into a physiologic solution on ice for preservation during transport. In the lab, the superior vesical arteries were cannulated bilaterally via the aorta. The cannulas were then advanced through the internal iliac arteries and secured in place with 2-0 silk ties. Bilateral ureters were tied off with 2-0 silk ties.

After cannulation, bladders were placed in a humidity chamber to simulate physiologic conditions. An infusion catheter was inserted in the urethra to fill the bladder, which was filled to 250 mL at a rate of 50 mL/min, allowing for sufficient size for image collection (Figure 1A). This volume was selected based on our previously published experiments and those of others (14,24-28). During dye infusion, the cannulated arteries were perfused at a rate of 10 mL/min to approximate a high physiologic flow rate (25). The first artery was perfused with deionized water mixed with standard green food coloring. Green was used first to show sharpest contrast against the naturally pink tinted bladder (Figure 1B). Once 50 mL had been perfused, deionized water mixed with red food coloring was perfused through the contralateral artery to provide a distinct color difference from the already dyed green region (Figure 1C).

The bladder work was performed in a well-lit room with adequate lighting to minimize the noise in the resulting images. The photographs were taken using the standard Apple iPhone built-in camera. These were taken with JPEG compression (94% quality) and with auto exposure and auto white balance. The camera was placed level on an arm located 0.45 meters above the bladder work area. Images were taken at various stages of the bladder dye protocol: before any color perfusion, after the green perfusion, and after the red perfusion. After initial images were collected, several bladders were also divided along the midline, demonstrating vasculature differences in the two hemi-bladders via the visualized differences in green and red coloration. Bladders were then opened and an additional image was collected, showing the dye-visualized vascular perfusion of the mucosal surface of the bladder. Each image included the same white color reference object, which was used to correct the white balance during processing.

The images were first color corrected using the white object included in the original image for consistency. The background in the bladder image was then removed (Figure 2A) and the image was split into two halves following along the line between the dome and base of the bladder (Figure 2B). The two halves were exported as PNG files so as to not further compress the image, and to keep the transparency component of the image. These segmented images were inputted into a custom written program for analysis (Figure 2C). The mucosal images of the bladder were processed in a similar manner (Figure 3).

Figure 2 Bladder analysis steps. (A) Whole bladder, (B) separate images for each half, (C) images loaded into custom program for analysis.

The HSV color model is a method of describing color in a manner that is more related to how colors are perceived. Hue is the color segment of this model, and is calculated as a value between 0° and 360° with each degree corresponding to a color value, with 0°/360° representing pure red, 120° pure green and 240° pure blue. Saturation refers to the amount of gray in a color. It represents the radius from the center on the HSV wheel and has a value between 0–1, with 0 being completely gray. Value describes the brightness of a color and varies from 0–100%, with 0% being completely black. Only the hue is considered in the current analysis. The hue of each bladder half was normalized to 60° for comparison, which corresponds to yellow, and is directly between red and green, the colors used for perfusion in this experiment. 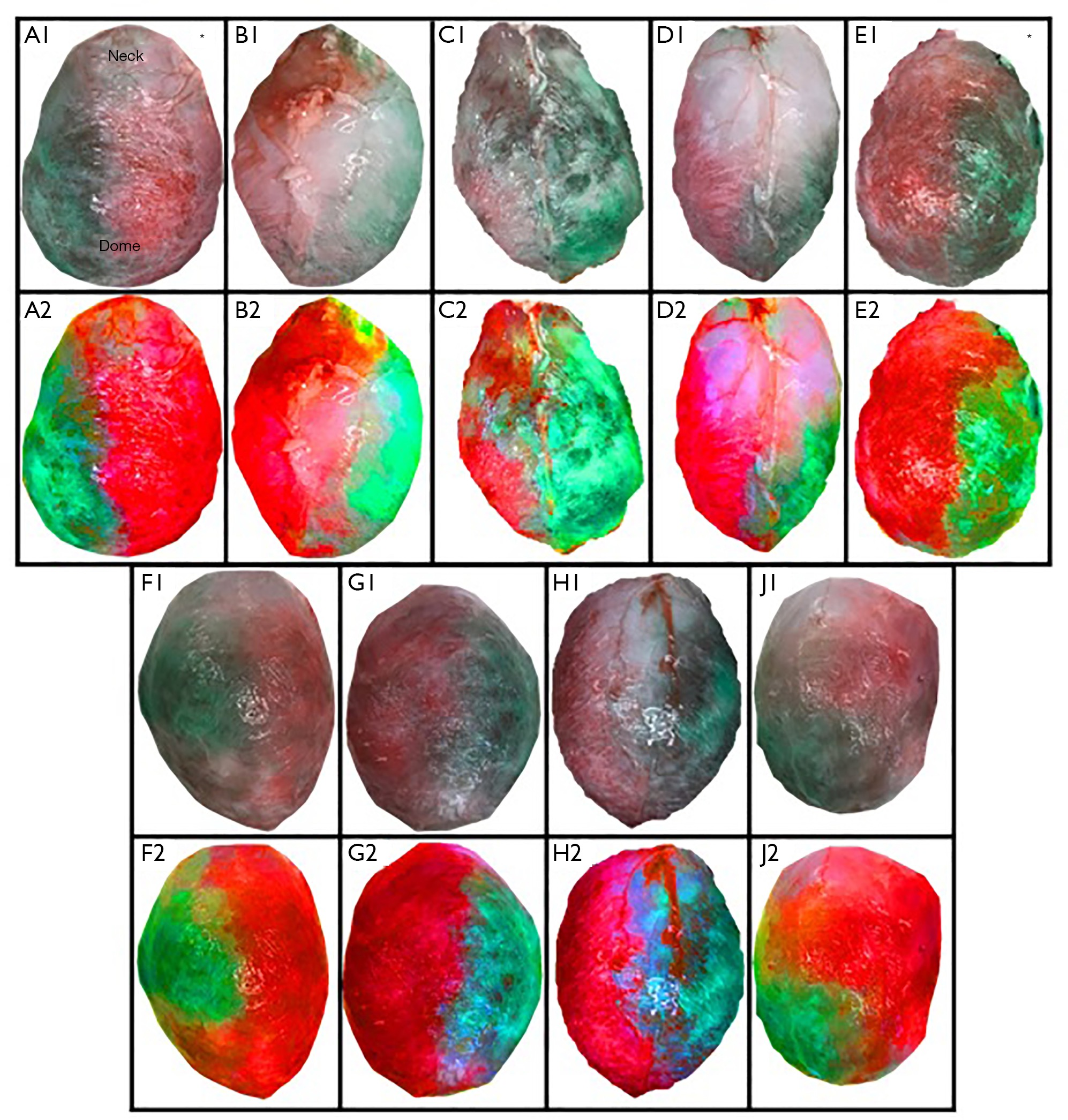 Figure 4 Images of all raw dyed bladders used for analysis (A1-J1), with corresponding bladders with exaggerated saturation to show the contrast shown below them (A2-J2) (*indicating female bladder).

Hue refers to an angle on the HSV color wheel, which can aide in the visualization of the average color. The average hue of each bladder half is represented as a line drawn on a color wheel relative to the color yellow (Figure 5). On the outer bladder wall, the green hue of the green halves was significantly different than the hue of the red halves. Similarly, the inner bladder walls display a significant difference in hues when comparing the red and green halves (Figure 5).

There is limited understanding of the vascular distribution that exists in the urinary bladder although urologists are widely taught that the bladder has excellent collateral circulation (29). Through our novel color mapping method with colored dye infusion into the paired superior vesical arteries, we demonstrate that there are areas of the bladder that are supplied chiefly by the ipsilateral artery. Each hemi-bladder demonstrated a statistically significantly different hue than the contralateral side suggesting reliance on a specific blood supply for perfusion. There is some degree of collateral circulation, as is noted in the hue analysis, that neither red nor green was a pure color.

Pelvic ischemia caused by atherosclerosis in aging is thought to play a role in the pathophysiology of LUTS, development of DO and subsequent progression to detrusor underactivity (5-8). Understanding the distribution of vascular flow is crucial to investigating the effect of ischemia on the urinary bladder and whether a hemi-ischemic event in the setting of transient or chronic ischemia is possible. The functional and molecular effect of acute ischemia has been investigated in a rabbit model (30). Rabbit detrusor smooth muscle displayed a significant decrease in contractile responses and compliance after bilateral ischemia (22,23).

Correspondingly, unilateral ischemia has been tested in rabbit models. Unilateral ligation of vesical arteries for 1 week resulted in 74% and 32% reduction in contractile response to bethanechol on the ipsilateral and contralateral sides, respectively (22). There was a corresponding 35% reduction in bladder capacity after 1 week suggesting functional consequences of unilateral ischemia (22). mRNA expression was altered in both the ischemic and non-ischemic sides of the bladder, with increased expression of c-fos, c-jun, bFGF, and hsp-70 mRNA transcripts observed on the ischemic side (21). These alterations were expressed in a pattern similar to the changes seen in rabbit models of partial bladder outlet obstruction and bladder overdistension, both conditions known to cause bladder ischemia (21). Taken, together, these data support our hypothesis that bladder blood flow has a geographic distribution and collateral circulation that may not be able to compensate for loss of part of the bladder’s blood supply with implications for both gene expression as well as bladder function.

There are limitations to the current study. It is not known whether dyes used in this study diffuse through bladder at the same rate as blood, and certainly, the color wheel normalization used in this study may not account for issues related to dye mixing. In this initial colorimetric study, physiologic buffer was not used due to the acute nature of the imaging. Future studies aimed at the evaluation of organ function in the setting of ischemia should use physiologic solutions. Ex vivo blood flow may not be the same as in the in vivo states, and the pig bladder, while similar to humans, may not have identical vascular supply. Furthermore, the pressure used to force the dye into the bladder vasculature may have been supraphysiologic, potentially causing greater crossover to be observed in this study than would normally occur in vivo. Finally, the study did not measure tissue function or biochemical/molecular measures of ischemia. However, this study aimed mainly to identify a simple visual method to map bladder perfusion on both the inner and outer surfaces. To our knowledge, this is the first study demonstrating color perfusion of bladder tissue in order to characterize bladder vascular distribution. Further research is needed to investigate the effects of acute ischemia on bladder function.

Perfusion of each hemi-bladder with contrasting dyes demonstrates a lack of collateral vesical blood flow suggesting that there are regions in the bladder at risk for ischemia with a loss of blood supply. Further research is warranted to understand bladder perfusion as well as the effect of acute ischemia on bladder function.

Reporting Checklist: The authors have completed the ARRIVE reporting checklist. Available at http://dx.doi.org/10.21037/tau-20-1467

Conflicts of Interest: All authors have completed the ICMJE uniform disclosure form (available at http://dx.doi.org/10.21037/tau-20-1467). The authors have no conflicts of interest to declare.

Ethical Statement: The authors are accountable for all aspects of the work in ensuring that questions related to the accuracy or integrity of any part of the work are appropriately investigated and resolved. Experiments were performed and granted exempt status after review by the Virginia Commonwealth University institutional care and use committee because the animals were already deceased at time of tissue harvest.