Three-dimensional (3D) reconstruction can be used to measure the PV (7,8) and the changes of bladder wall thickness (BWT) (9). Its advantages are accurate and intuitive. However, other 2D parameters related to BPH have not been measured in 3D planes as well as other characteristics of prostate, prostate urethral, and bladder. In addition, little attention has been paid to the 3D reconstruction of prostate zonal anatomy.

We measured conventional parameters in 2D plane, as well as other features of BPH using three-dimensional measurement in this study. The purpose of this research is to better understanding the lower urinary tract anatomy of male and to provide references for clinical diagnosis and treatment of BPH. We present the following article in accordance with the STROBE reporting checklist (available at http://dx.doi.org/10.21037/tau-21-142).

This retrospective study analyzed clinical database of patients who visited Tianjin first central hospital for lower urinary tract symptoms/BPH from October 2016 to November 2019. A detailed history of 296 patients who underwent T2 MRI was obtained in our study. Exclusion criteria included: history of surgery of lower urinary tract, prostatitis and other non-benign prostatic hyperplasia diseases, patients did not carry a urinary catheter. Patients whose peripheral zone and/or central gland were impossible to identify were also excluded from this study. Finally, 98 patients who carried a urinary catheter with urinary retention which was caused by benign prostatic hyperplasia were eligible for analysis. They were divided into 4 groups by age: 50–60, 60–70, 70–80 and 80–90 (n50-60=14, n60-70=30, n60-70=36, n70-80=18). The study was conducted in accordance with the Declaration of Helsinki (as revised in 2013) and approved by Institutional Review Board (IRB) of the Tianjin First Center Hospital (registration ID2018NO22KY). Individual consent for this retrospective analysis was waived.

Values were shown as mean ± standard deviation. Two independent-samples t-tests or Mann-Whitney U test were used to compare the parameters of PV <80 mL group and PV >80 mL group as well as 2-D measurements and 3D measurements. All parameters of proximal prostatic urethra and distal prostatic urethra were compared by the paired t-test or Wilcoxon Rank-Sum test. Comparisons between age groups were made by one-way ANOVA or Kruskall-Wallis test. All statistical methods were chosen according to whether the data conformed to normal distribution. All statistical analysis was analyzed by SPSS software 25.0 (IBM, Armonk, NY, USA). P<0.05 considered statistically significant. 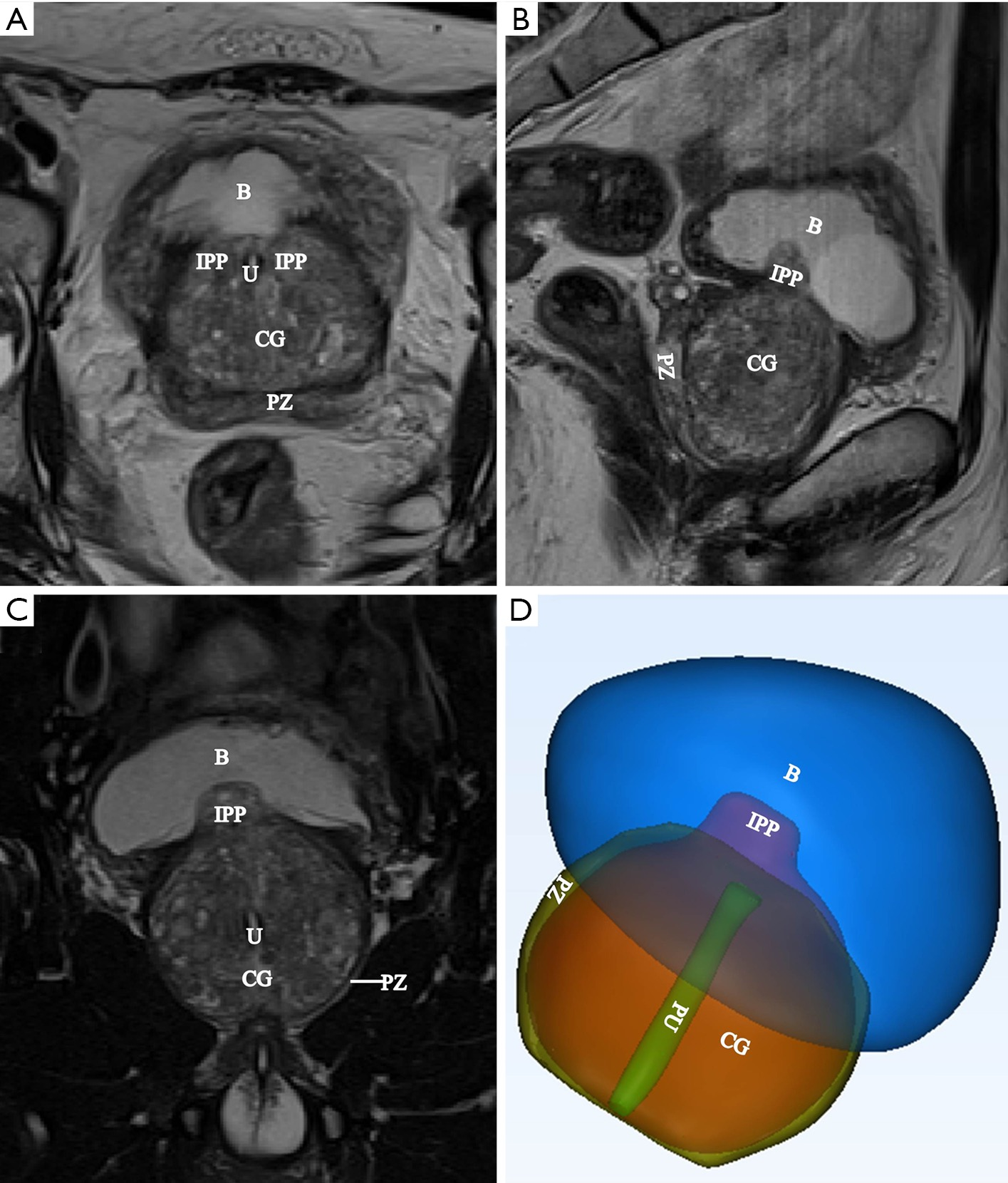 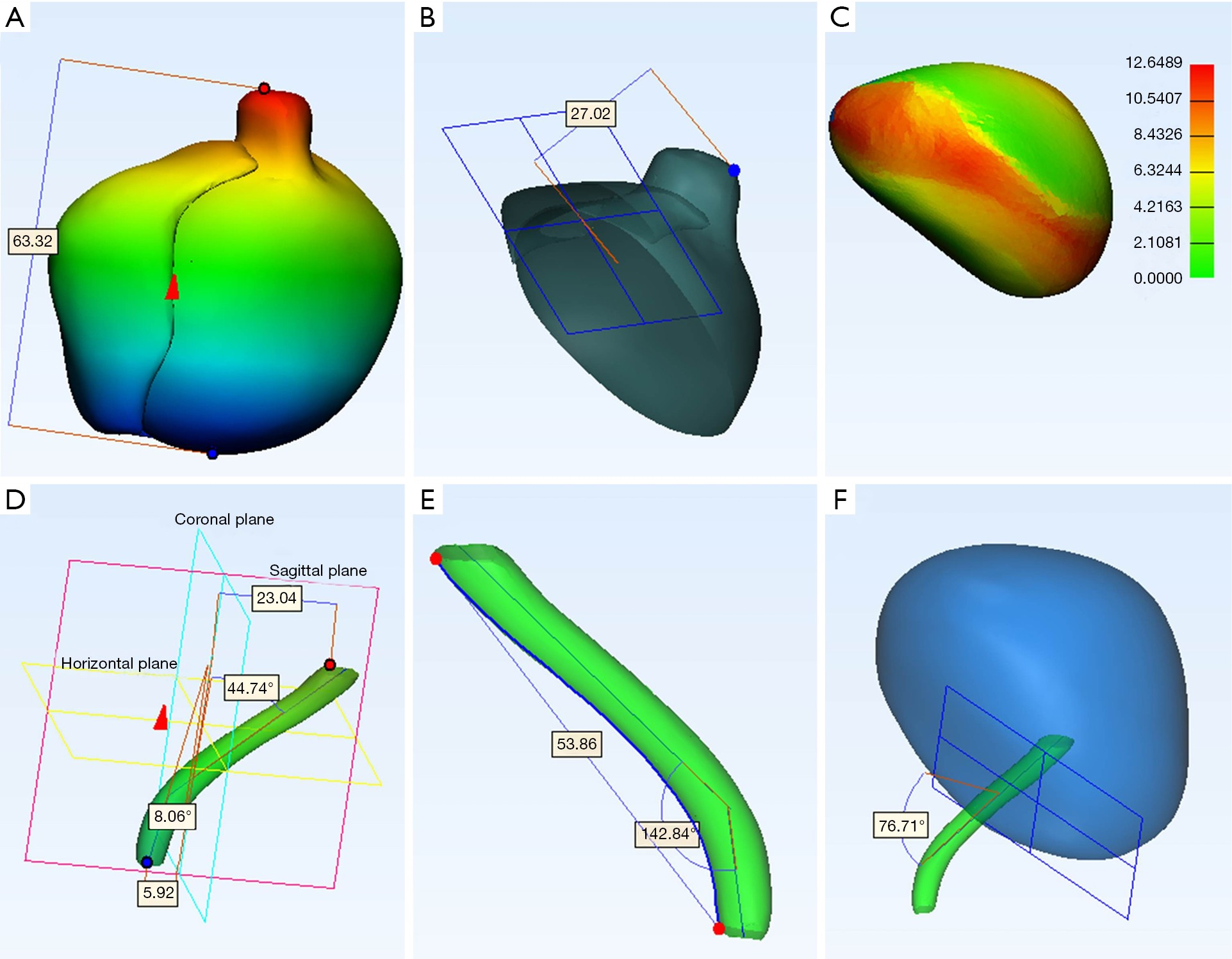 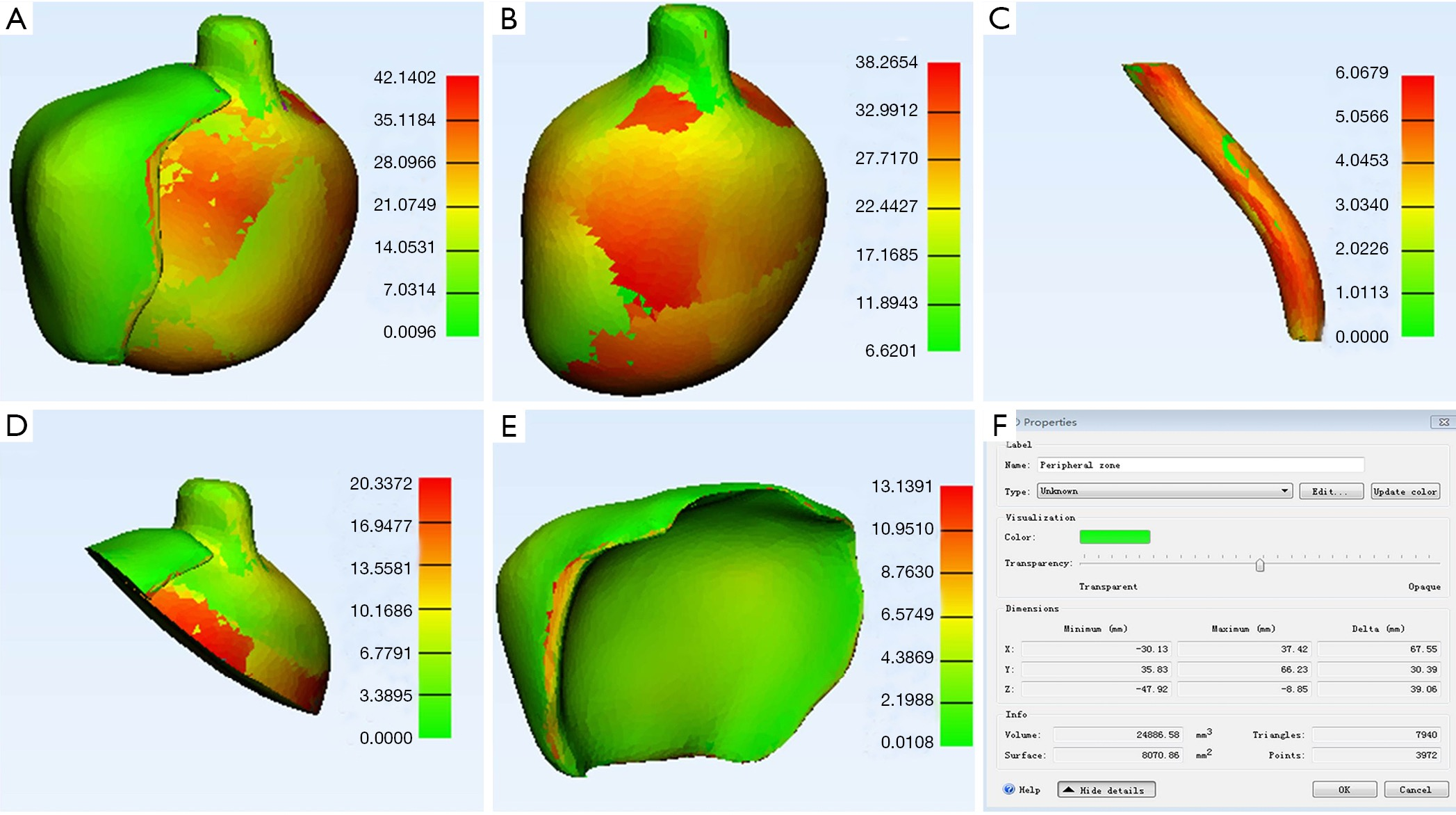 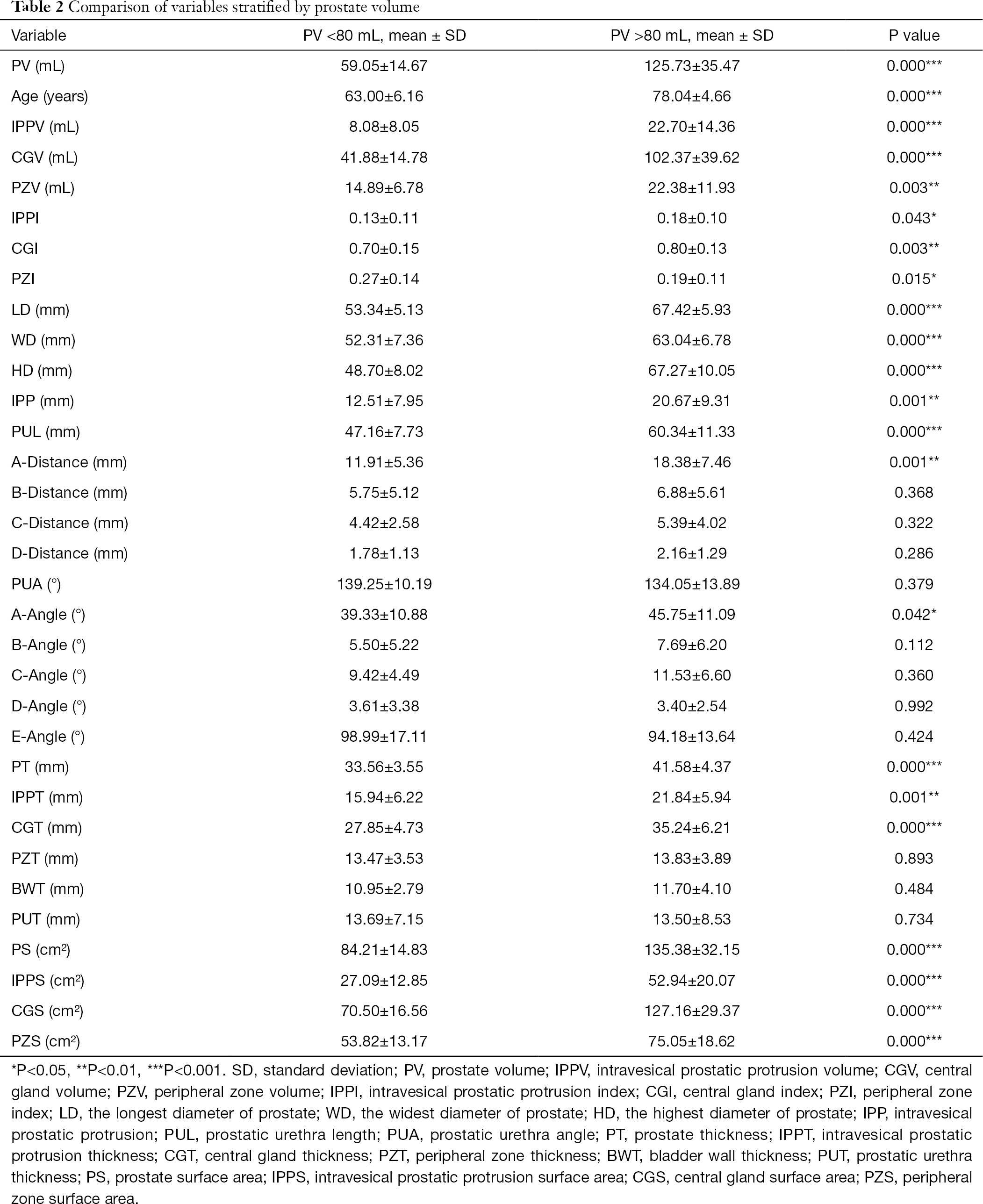 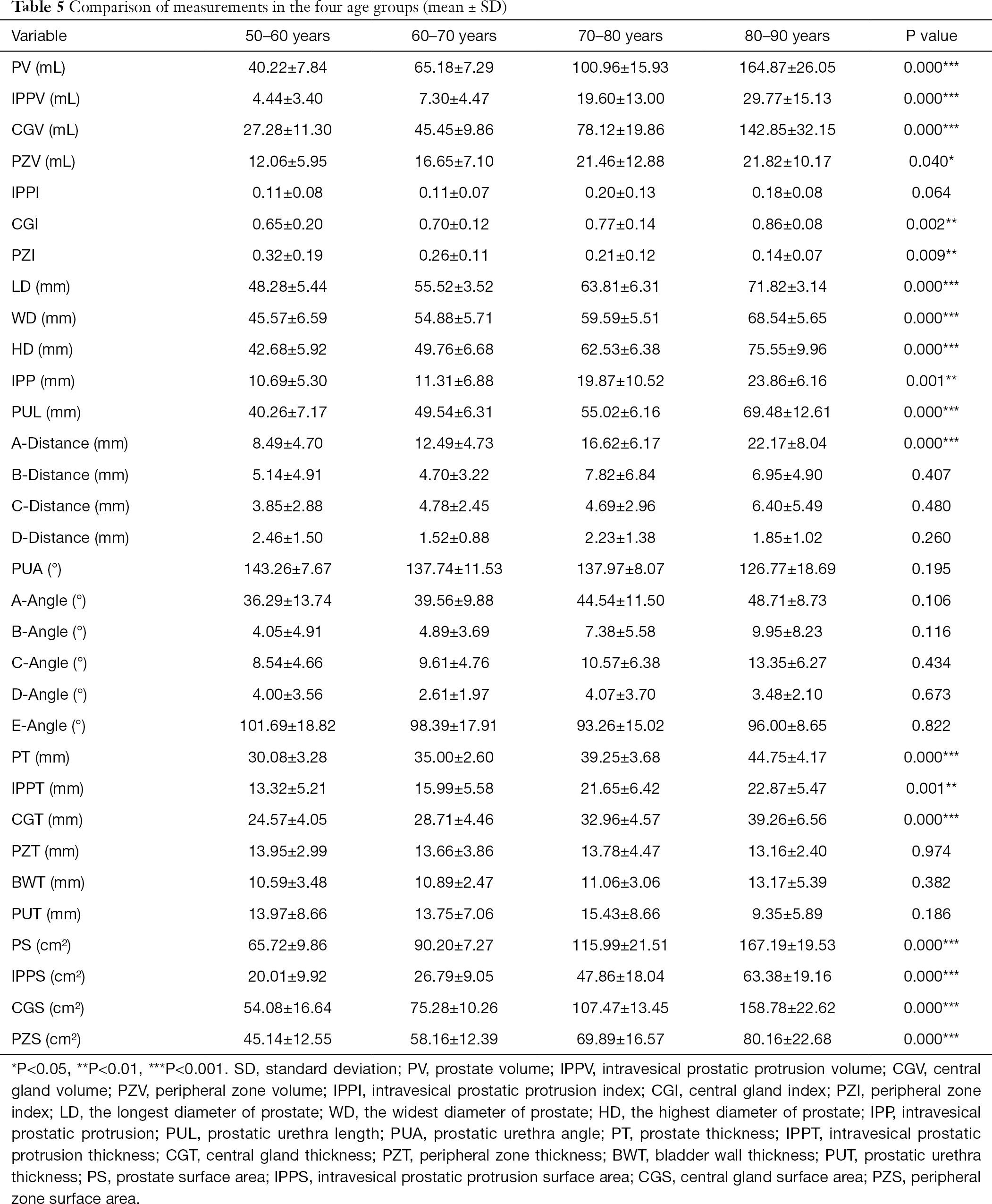 MRI was a robust and reliable method for measuring PV (10). MRI with 3D segmentation software could provide an effective solution for accurate measurements of PV (11). In this study, 3D measurement was used not only to measure various 2D parameters related to BPH but also other characteristics of BPH. This study showed that 3D measurement can be used as a mean to understand the characteristics and pathology progression in BPH.

This study found that 3D plane can provide us with much more accurate measurements than general 2D plane. There was statistical difference in the WD between the 2D measurement and 3D measurement. The WD had important implications in prostatectomy. Based on WD measurement, the anatomic structure of ejaculatory ducts can be determined, which had important implications for retention of ejaculatory function following transurethral resection of prostate (12). Measurement of diameter line in 2D planes is restricted by irregularities in prostate contour and the result is subjectively influenced by the operator. There may be a lack of anatomical features in the three-dimensional model reconstructed by using the horizontal plane alone. To compensate for this defect and achieve accurate reconstruction of the lower urinary tract anatomy, this study applies 3D model-based registration for creation of fusion 3D model on account of each horizontal, sagittal and coronal plane. Moreover, measurement of the diameter line was analyzed by 3-matic software. Therefore, 3D measurement guarantees more reliable and robust results.

Though formula of PV had been commonly explored, measurement errors were inevitable (13,14). Measurement of PV was successfully achieved in this study. Measurement of the PV can serve as a reference standard to use of alpha blockers (15), perform prostatectomy (16), and select prostate biopsy site (17). The standard critical value of PV =80 mL was chosen for the prostatectomy (18). The IPP was the important parameter to assess BPH (19). IPP, IPPT, IPPV, IPPI and IPPS of PV >80 mL group were significantly higher than those in PV <80 mL group in our study. IPP, IPPT and IPPS significantly increased with age. IPPV and PV also strikingly increased with age, while IPPI did not change with age. IPPI was defined as a ratio between IPPV and PV. This indicated that increment of volume was almost the same in the PV and IPPV.

Tian et al. and Kwon et al. had used transrectal ultrasound (TRUS) to measure the PZT. Tian et al. discovered that the mean value of PZT was 13.3±6.3 mm, which was not modulated by age (20). However, Kwon et al. found that the mean value of PZT was 11.10±2.50 mm, which was significantly decreased with age (21). Those results were different from the result of our present study. The mean value of PZT in this study was 13.75±3.77 mm. The differences may result from the inaccuracy of results measured by TRUS. In TRUS, PZT measurement was required to determine the longest line which was draw from the center of the transitional zone to the outer margin of the peripheral zone. Apart from that, peripheral zone was relatively difficult to be differentiated in TRUS. The profile of the peripheral zone was clearer in T2-weighted MRI. Accordingly, peripheral zone was reconstructed precisely. Moreover, PZT was analyzed by 3-matic software. The analysis tools employed to measure PZT was reliable, which guaranteed the quality of this data. PZT had no significant difference in the patients above the age of 50. Our result was consistent with Tian et al.

The shape of peripheral zone is irregular. It was too difficult to measure the PZV and to find a solution to the measurement of PZV. However, 3D measurement was a good way to solve this problem. Currently, a few researches about PZV were controversial. Matsugasumi et al. reported findings from a retrospective analysis that the PZV maintained steadily at about 20 mL in patients with BPH, and the indirect influence of the age on the variation in PZV was small (22). However, findings from a longitudinal study by Williams et al. found that the PZV in the 50–60 years age group was significantly higher than it in <45 years age group, which increased about 5 mL (23). These differences were probably due to variations in study methodology.

Similar to study by Williams et al., we found that with the increased in PV, PZV was increasing as well, but the magnitude of this change is relatively small. Comparing to 50–59 years age group and 60–69 years age group, the PZV for 60–69 years age group and 70–79 years age group increased few. In addition, this study found that PZI significantly decreased with age. This indicated that greater increases in the PV than in the PZV. Subjects in study by Matsugasumi et al. were Japanese and Americans. While in the Williams’s study and our research, the subjects were Americans and Chinese respectively. Therefore, the discrepancy might be caused by the different races.

This indicates that the rearward slope of the prostatic urethra is greater than the left or right offset during the process of BPH. To date, only one study has measured PUT. The PUT was measured as 6 [2–16] mm in a study by Guneyli et al. (29). However, the median (IQR) value of PUT was measured as 11.63 (6.91–17.41) mm in this study. The discrepancy might be due to patients had or had not a urinary catheter. Subjects in our study had a urinary catheter. The fine structure of prostatic urethra will be clearer and the reconstruction will be more accurate if patients had a urinary catheter. The PUT was analyzed by 3-matic software, which avoided the influence of subjective factors. No significant differences were found in PUT between any of the groups. This suggests BPH has little impacts on the PUT. No differences in BWT and E-Angle were also found between any of the groups. BWT was influenced by the volume of urine (30). Besides, patients who were unable to void may have some effect on BWT.

However, this study also has some limitations. First, while we were able to measure multiple features of BPH, our choice of regions of interest was based on anatomical contour, which was time-consuming. Future work is needed to explore methods of automated 3D segmentation. In addition, the BWT and E-Angle results may be affected by the fact that the patients had a urinary catheter.

To sum up, 3D measurement is more accurate than 2D measurement. PZV was increasing, but the magnitude of this change is relatively small and the rearward slope of the prostatic urethra is greater than the left or right offset during the process of BPH. The BPH has a minor impact on the PZT and PUT, and 3D measurement is a great tool for measuring features of BPH, which provides good supports for further clinical and scientific research.

Reporting Checklist: The authors have completed the STROBE reporting checklist. Available at http://dx.doi.org/10.21037/tau-21-142

Conflicts of Interest: All authors have completed the ICMJE uniform disclosure form (available at http://dx.doi.org/10.21037/tau-21-142). YX serves as an unpaid editorial board member of Translational Andrology and Urology. The other authors have no conflicts of interest to declare.

Ethical Statement: The authors are accountable for all aspects of the work in ensuring that questions related to the accuracy or integrity of any part of the work are appropriately investigated and resolved. The study was conducted in accordance with the Declaration of Helsinki (as revised in 2013). The study was approved by Institutional Review Board (IRB) of the Tianjin First Center Hospital (registration ID2018NO22KY) and individual consent for this retrospective analysis was waived.