Kidney transplantation is the optimal treatment for end-stage renal disease and is far superior to hemodialysis in terms of long-term survival rate, quality of life and treatment cost (1). In most cases, allografts undergo warm and cold ischemia and subsequent ischemia-reperfusion injury (IRI). Allografts with longer ischemic time (14 hours) were reported to be more likely to demonstrate delayed graft function, and the risk of graft loss increased by 1% for per hour increase in the duration of total ischemia in comparison with allografts with shorter ischemic time (<14 hours) (2). As a result of necrosis of renal tubular epithelial cells, renal IRI not only delays the recovery of graft function, but also promotes rejection. Because of specific immunity that results from antigen exposure caused by injury, renal IRI affects the long-term survival rate of renal allografts and recipients (3). Evidence indicating that allografts with early resistance to IRI have significantly enhanced function 5 years after transplantation in recipients and may prolong life is robust (4). Although good results have been achieved, the alleviation of IRI and the improvement in prognosis are still not ideal (5).

During IRI, in comparison with the collecting duct, the renal proximal tubule is more susceptible to tissue damage that is more likely to be severe. Phenotypic differences between the collecting duct and the proximal tubule might account for the difference in susceptibility. Aquaporin 2 (AQP2), one member of aquaporin (AQP) family, is considered to be expressed mostly in the collecting duct, and its regulating action is responsible for fine-tuning the final urine volume to meet the current demands of the body (6). Besides being involved in fluid transport, research has revealed the modulatory role of AQPs in interleukin (IL)-1β-related inflammation (including pyroptosis), in pathophysiological processes in tissue and organ inflammation, in oxidative stress and in IRI (7). AQP deletion is linked to worse prognosis of patients with renal IRI (8). Moreover, the regulating activities of AQPs can affect the survival of allografts (7). However, there is no evidence clarifying the effect of AQPs on pyroptosis in renal IRI.

Because of the differences between the collecting duct and the proximal tubule in response to IRI and their differential expressions of AQPs, we evaluated the potential effects of AQPs on renal IRI, with a particular focus on the AQP2 and the process of pyroptosis.

We present the following article in accordance with the ARRIVE reporting checklist (available at http://dx.doi.org/10.21037/tau-21-71).

The renal IRI model in mice

Adult C57BL/6 male mice (eight weeks old; Chengdu Dossy Experimental Animals, Co., Ltd., Chengdu, China) were raised under standard guidelines. The Animal Ethics Committee of West China Hospital, Sichuan University, Chengdu, China (No. 2019141A) approved this study. All experimental procedures were followed by the National Institutes of Health Guide for the Care and Use of Laboratory Animals. Fifteen mice were fed adaptively for 7 days and then randomly divided into two groups. To establish a renal IRI model, the bilateral renal pedicles were clamped simultaneously with a non-invasive artery clamp for 30 minutes (Figure S1, n=8); for the sham model, the operation lasted for 30 minutes without clamping (n=7). All mice were sacrificed after 24 hours, and their blood and renal tissues were collected.

Both HK-2 and 293T cells were obtained from the Institute of Urology, West China Hospital of Sichuan University, Chengdu, China. HK-2 cells were cultured according to the recommended methods of the American Type Culture Collection (9). Some cells were cultured in conditions of hypoxia for 24 hours and then in normal oxygen conditions for 12 hours to achieve H/R, as previously described (10).

A lentiviral expression vector (pLVX-AcGFP1-N1) was utilized to construct plasmids containing the target gene AQP2 (NCBI Reference Sequence: NM_000486.5). The lentivirus was packaged and concentrated through 293T cell transfection. The virus titre was measured under a fluorescence microscope (Figure S2). HK-2 cells were transfected to obtain cells that overexpressed AQP2 (AQP2hi cells) and control cells created through the use of non-related blank vectors (NR cells).

The collected renal tissues of the mice were formalin-fixed, paraffin-embedded and then sectioned for subsequent haematoxylin-eosin (HE) staining. The following procedures were performed as previously described.

The data were calculated as means ± standard deviations. All analyses were performed with SPSS version 22.0 (SPSS Inc., Chicago, IL, USA) and GraphPad Prism version 7.0 (GraphPad Software Inc., La Jolla, CA, USA). Among multiple groups, the one-way NOVA analysis, followed with a Tukey test was used to compare the differences of all column pairs. For difference between two groups, Student’s t-test was applied. P<0.05 was considered to be significant.

Renal IRI resulted in pyroptosis and downregulated the expression of aquaporins 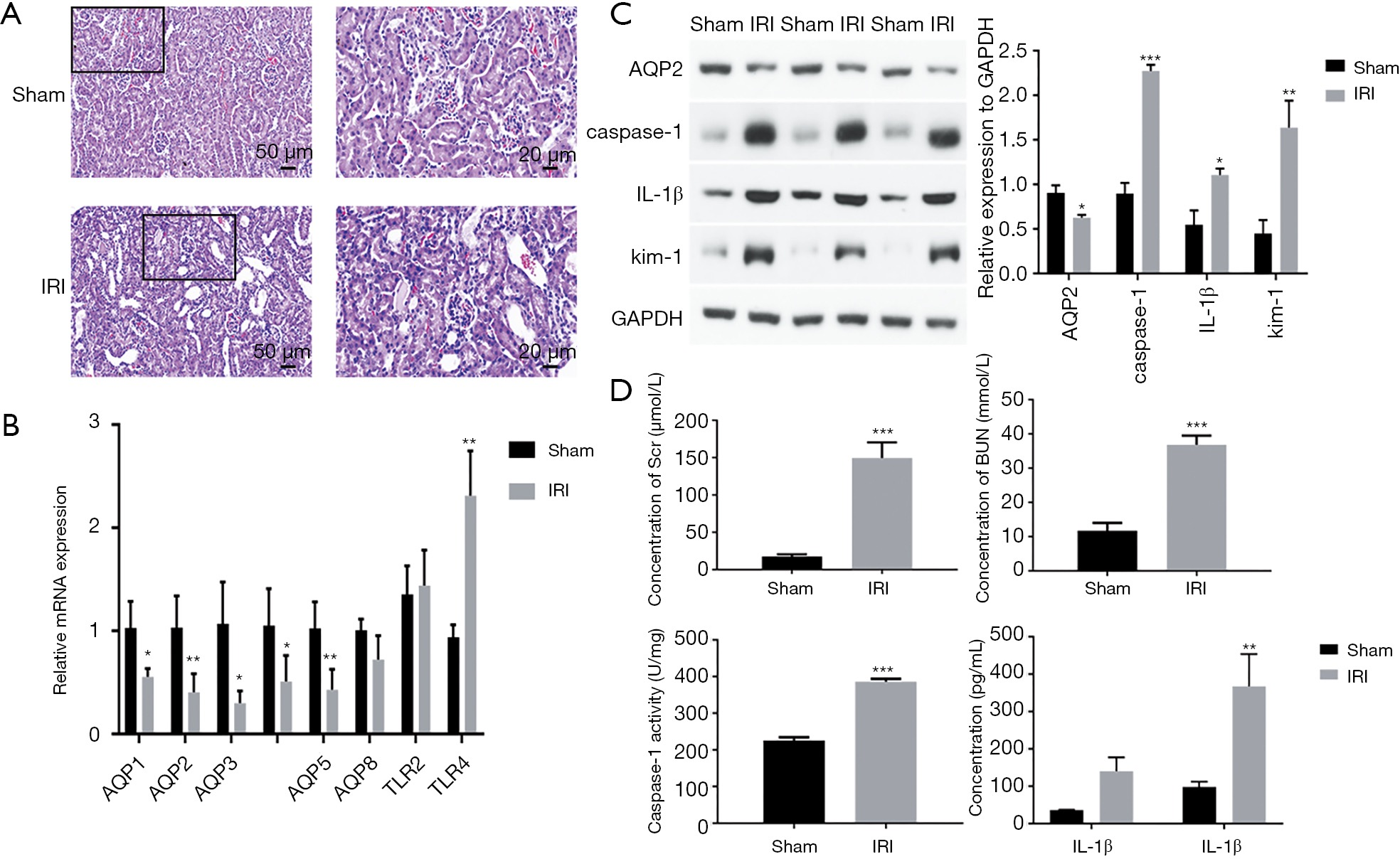 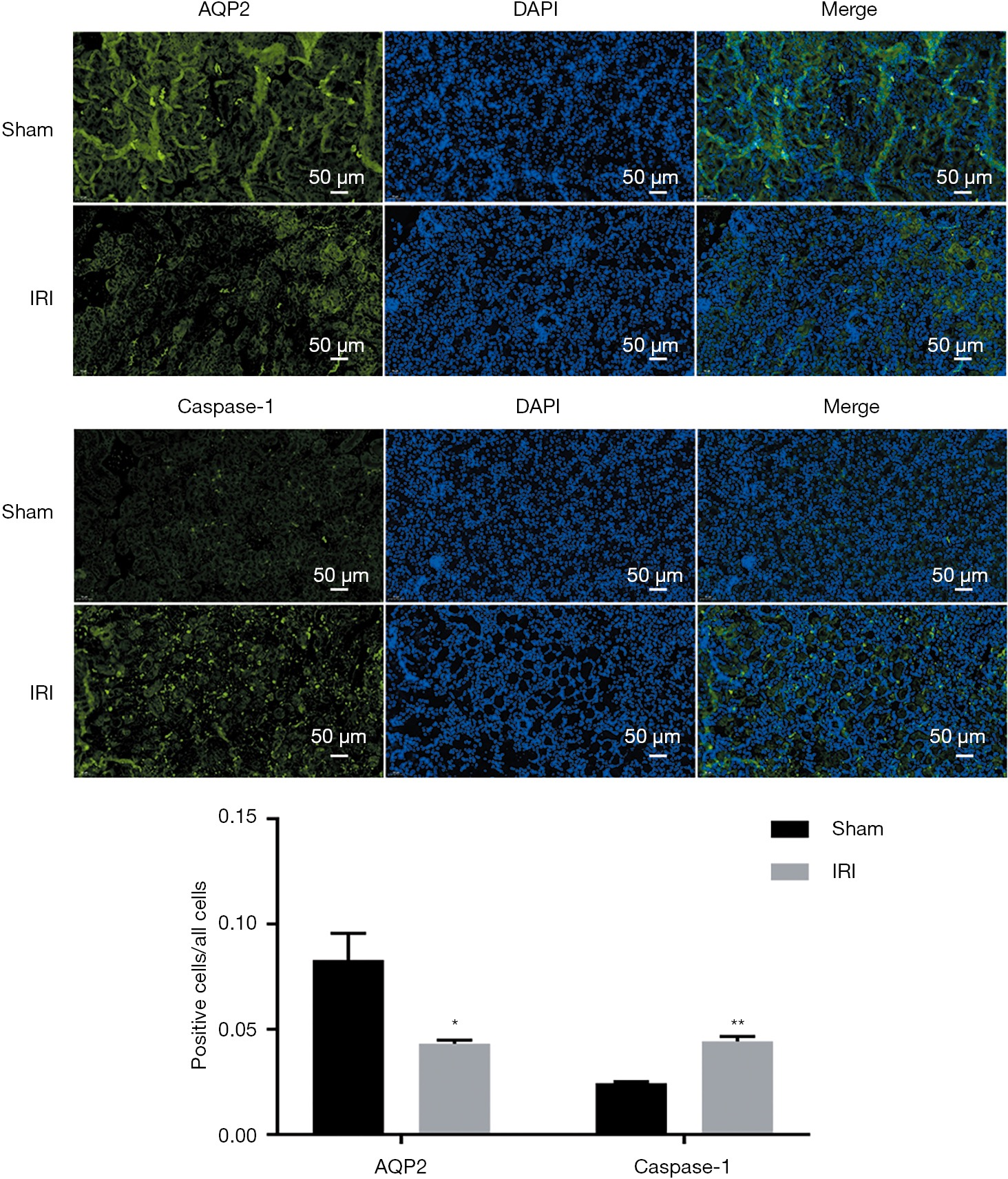 Figure 3 H/R resulted in pyroptosis and downregulation of AQP2 in HK-2 cells. (A) Western blot analysis. Tissues from mice that received H/R (the H/R group) expressed significantly less AQP2 but significantly more kim-1, IL-1β and caspase-1 than did those of the NC group. (B) Testing with the Cell Counting Kit-8. The OD values at the same time point were all significantly lower in the H/R group than in the NC group after 24-, 36-, 48-, and 60-hour culture. (C) qRT-PCR analysis. In the H/R group, mRNA expressed significantly less AQP2 and numerically less AQP1, APQ3 and AQP5 than did the NC group; expressions of AQP4 and AQP8 were comparable between the two groups. (D) Measurement of concentration of IL-1β and IL-18 in supernatant, and release rate of LDH and activity of caspase-1 in cells. Concentrations of IL-1β and IL-18 in the supernatant were significantly higher for the H/R group than for the NC group. The release rate of LDH and activity of caspase-1 was significantly higher in the H/R group than in the NC group. Compared with the sham group: *means 0.01≤P≤0.05; **means 0.001 ≤P≤0.01; ***means P<0.001. AQP, aquaporin; HK-2, human kidney 2; H/R, hypoxia-reoxygenation; IL, interleukin; IRI, ischemia-reperfusion injury; kim-1, kidney injury molecule 1; LDH, lactate dehydrogenase; mRNA, messenger RNA; NC, negative control; OD, optical density. 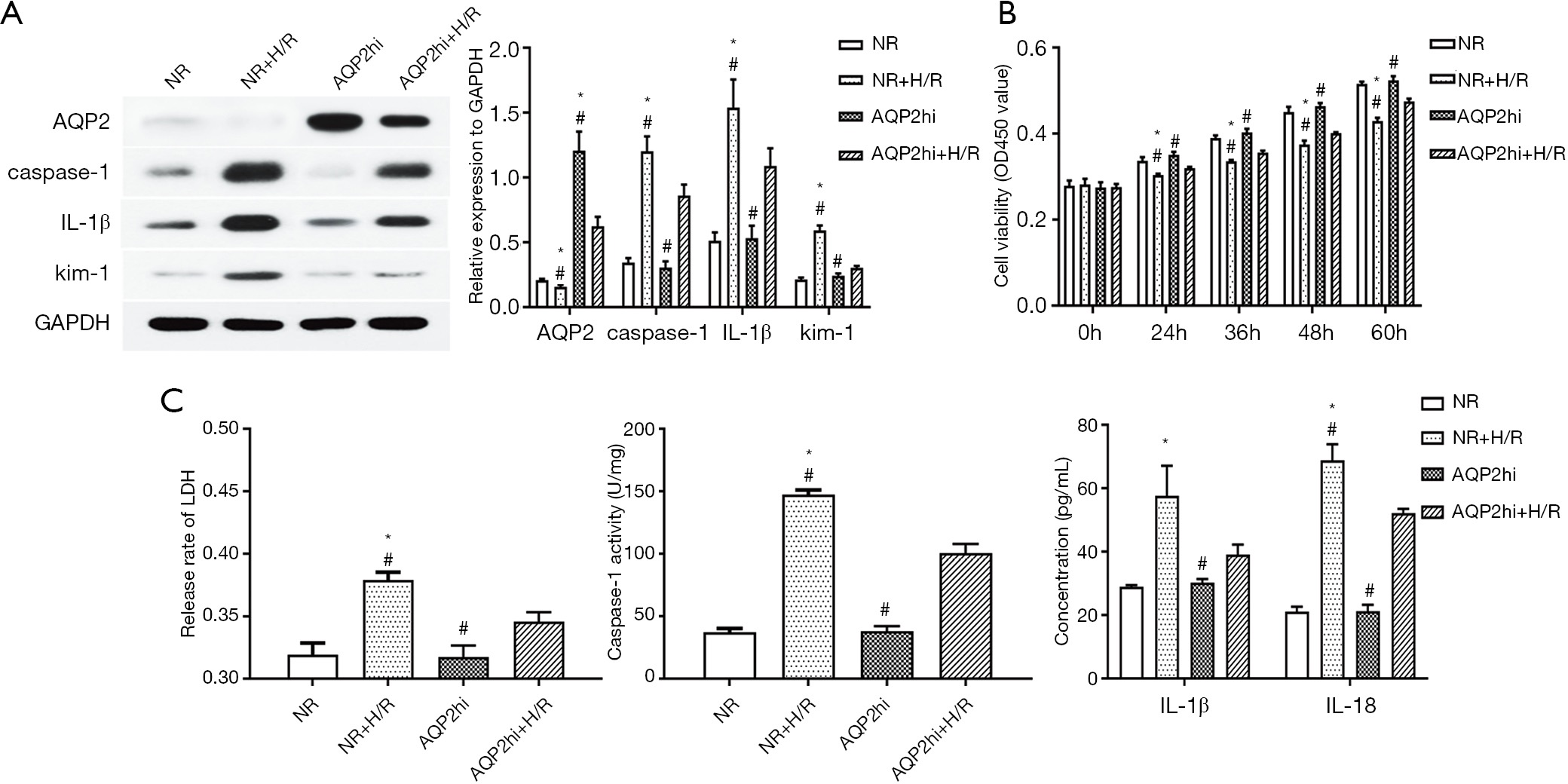 Previous study has reported that the urinary exosomal release of AQP1 and AQP2 during severe acute kidney injury in mice were significant decreased (11). The expression of renal AQP1 and AQP2 were also reported to be downregulated when urine volume was decreased in recipients of kidney transplants, and AQP2 downregulation was related to a decline in the glomerular filtration rate (12). In our study, we found the mRNA expression of AQP1-AQP5 were significantly decreased and the AQP8 was numerically decreased after IRI initiation in mice kidneys. Current research has confirmed that during IRI, amounts of radical oxygens were generated, accompanied by pro-inflammatory response, which increased renal cell apoptosis, autophagy and irreversible cell death (13). While, increasing expression of AQPs could reduce cell injury by reducing oxidative stress, promoting metabolism, and inhibiting the signals involving apoptosis and inflammation. We also confirmed that the IRI group in vivo had higher expression of Toll-like receptor 4, caspase-1, kim1, and IL-1β; higher caspase-1 activity; and higher concentrations of IL-1β and IL-18 in blood; while less AQP2 expression were observed. Similar results were also observed in HK-2 cells in vitro experiments, and the H/R group cells were found to have more pyroptosis by FAM-YVAD-FMK/Hoechst/PI staining. The overexpression of AQP2 partially reversed the above changes of HK-2 cells. These results revealed the potential modulatory role of AQP2 in pyroptosis in the proximal tubule, and overexpression of AQP2 might reduce injury from renal IRI and improve renal outcome.

Pyroptosis is a type of cell death with different mechanism, characteristics, and outcome from those of apoptosis or necrosis (14). According to reported studies, the process of tissue IRI accompanies the occurrence of pyroptosis and decrease of AQPs levels (11,15), and these were consistent with the results we observed in the mice kidneys of IRI model. Caspase-1 is capable of cleaving Gasdermin D, which is essential to promote pyroptosis, to the formation of large pores in the plasma membrane (16). Furthermore, caspase-1 promote IL-1β and IL-18 from inactive precursors to maturation through these formed pores or upon cell lysis, then leading to pyroptosis (14). Pyroptosis plays an important role in renal IRI (17). In this study, the upregulation of caspase-1, IL-1β, and IL-18 were observed in IRI group, suggesting that caspase-1-mediated pyroptosis may be involved in renal IRI. The suppression of pyroptosis potentially prevented the process of organ IRI. Chun et al. found that, in rats, hydrogen sulfide protected against lung injury after limb ischemia-reperfusion by alleviating inflammation and AQP1/AQP5 expression abnormalities (18). Besides, AQP3 deletion in murine kidneys resulted in worse IRI outcomes (8). However, to our knowledge, no other study has focused on the relationship between AQPs and pyroptosis in renal IRI. In this study, the expression of AQP2 in HK-2 cells in the H/R group was significantly down-regulated, accompanied by lower cell proliferation rate, more release of IL-1β and IL-18, and more pyroptosis. However, the overexpression of AQP2 in HK-2 cells exhibited milder pyroptosis and less cell injury than that of the control cells after H/R. The results of this study indicate that increased AQP2 expression in HK-2 cells may reduce pyroptosis during H/R.

The lower expression of AQP2 was observed in IRI groups, accompanied by an increase in pyroptosis, which was consistent with other studies (19,20). Besides, this study showed that the exogenous overexpression of AQP2 attenuated the HK-2 cell damage and pyroptosis caused by H/R, which may be related to the down-regulation of caspase-1 expression and activity. However, this study still had some limitations. On the one hand, we only studied the effects of overexpression of AQP2 on the proliferation and pyroptosis of HK-2 cells, the exact mechanism of AQP2 in modulating pyroptosis and the changes in renal physiological function after AQP2 overexpression remained unknown. On the other hand, it is thought that AQP2 expression is mainly expressed in the distal tubules and collecting ducts. However, some studies suggested that the expression of AQP2 could also be detected in HK-2 cells, suggesting that the weakly expressed AQP2 in renal proximal tubular cells may be a potential research target (21,22). Furthermore, the pathophysiological mechanism of kidney IRI is complex. Increasing the expression of AQP2 alone may not completely reverse the injury of renal tubular cells induced by ischemia-reperfusion, but a potential therapeutic target. Currently, it is reported that calcium and cAMP/PKA signaling activators can induce AQP2 activation. Prostaglandin E2 (PGE2) receptors EP2 and EP4, can selectively increase the transcription and membrane accumulation of AQP2 (23). Moreover, EP4 has been confirmed to be able to attenuates renal ischemia-reperfusion (I/R) injury by against I/R-induced oxidative stress, necrosis, apoptosis and autophagy (24,25). In further studies, more in vivo animal experiments will be carried out to explore the effect of overexpression of AQP2 on the kidneys of IRI and its potential mechanism. Due to the large physiological differences between humans and mice, the application of the results of this study to the clinic still needs more researches.

This study provided a novel insight into the modulatory role of AQP2 in pyroptosis of HK-2 cells. These results indicated that increasing AQP2 expression in proximal tubular cells could potentially reduce pyroptosis during renal IRI. Drugs targeting AQPs may have broad potential clinical applications (26). The development of reagents that increase AQP2 expression for the treatment of renal IRI is expected in the foreseeable future.

Reporting Checklist: The authors have completed the ARRIVE reporting checklist. Available at http://dx.doi.org/10.21037/tau-21-71

Conflicts of Interest: All authors have completed the ICMJE uniform disclosure form (available at http://dx.doi.org/10.21037/tau-21-71). The authors have no conflicts of interest to declare.

Ethical Statement: The authors are accountable for all aspects of the work in ensuring that questions related to the accuracy or integrity of any part of the work are appropriately investigated and resolved. The Animal Ethics Committee of West China Hospital, Sichuan University, Chengdu, China (No. 2019141A) approved this study. All experimental procedures were followed by the National Institutes of Health Guide for the Care and Use of Laboratory Animals.