It is common for diabetes mellitus (DM) patients to have erectile dysfunction (ED) (1) and ED decreases the quality of life in seriously (2). Since the prevalence of DM is increasing worldwide (3), ED cases in men who suffer from DM have increased sustainedly for decades (4,5). The etiology of diabetes mellitus erectile dysfunction (DM ED) is thought to be due to vascular damage caused by hyperglycemia which induces the function of peripheral or autonomic nerve system (1). The main medication currently used for DM ED is a phosphodiesterase 5 inhibitor (PDE5I) that can induce vascularization to the corpus cavernosum (6). However, it is known that patients with DM have poor responses to PDE5I (7). Since erectile function plays essential role in the psychological wellbeing and reproductive function, an effective approach to treat diabetes DM ED is in urgent need.

Extracorporeal shockwave therapy (ESWT) has been applied for treating various disorders, including musculoskeletal disorders and myocardial infarction with damaged tissues (8,9). Therapeutic ultrasound can induce VEGF expression, thereby stimulating angiogenesis (10). Since the first report of treatment of ED with Li-ESWT by Vardi et al. (11), numerous studies have reported effects of ESWT on DM ED (12-14). It has been suggested that ESWT can promote regeneration and tissue repair by stimulating angiogenesis and restoring blood flow to injured areas (15). ESWT can also upregulate the stromal cell derived factor-1 (SDF-1) expression, to recruit endothelial progenitor cells into damaged tissues (16,17).

Mesenchymal stem cells (MSCs) are hopeful cell sources for regenerative medicine with extraordinary self-renewal abilities. In addition, they can transform into different types of cells (18). MSC therapy can promote cellular growth and prevent apoptosis. Thus, it can be used for treating nerve injury, trauma, inflammatory diseases, and so on (19).

In this study, we made an ED streptozotocin (STZ)-induced DM rat model and then administered ESWT or SDF-1 eMSC treatment. We hypothesized that ESWT combined with SDF-1 eMSC therapy could enhance angiogenesis and regenerate nerve functions of corpus cavernosum and thereby accelerate the treatment for DM ED using a rat model. We evaluated the effect of such combination on DM ED and underlying mechanisms involved in such effect. We present the following article in accordance with the ARRIVE reporting checklist (available at http://dx.doi.org/10.21037/tau-21-79).

250–300 g weighing fifty 8-week-old male Sprague-Dawley rats were purchased from Orient Bio Co. (Seongnam, Korea). At a dose of 65 mg/kg body weight, streptozotocin (STZ, Sigma-Aldrich chemical company, USA) was injected intraperitoneal to induced DM (23). Normal group of rats were injected with an equal amount of the solution (0.1 mol/L citrate-phosphate buffer, pH 4.5) used to dissolve STZ. At 72 hrs after injection, blood samples were obtained from tail veins. DM was diagnosed by blood glucose level above 300 mg/dL. An Accu-Chek active blood glucose monitor (Hoffmann-La Roche Ltd., Basel, Switzerland) was used to determine blood glucose level. After 12 weeks, erectile function test was performed and normal erectile functioning rats were excluded. When seminal strain was not found in a week after putting adult female rat with a streptozotocin-induced DM rat together, this experimental rat was included for the next process. The rat was excluded when seminal stain appeared. Then rats were divided into five groups (n=10 per group): (I) Normal group (n=10, without STZ), (II) DM ED, (III) DM ED + ESWT group, (IV) DM ED + SDF-1 eMSC group, and (V) DM ED + ESWT + SDF-1 eMSC group. Experiments were performed under a project license (NO.: CUMC-2016-0310-01) granted by the Institutional Animal Care and Use Committee of the Catholic University of Korea, in compliance with institutional guidelines for the care and use of animals.

The SDF-1 sequence was obtained from GenBank (accession number: NM_000609.6). DNA sequencing was performed for confirming the frame of introduced sequence (Cosmo Genetech, Seoul, Korea). The seeding of modified cells was done in a 12-well plates, density of 1×105 cells per well. After 48 hours of cell culture, SDF-1 protein levels were measured using ELISA kits (R&D Systems, Minneapolis, MN, USA) from the harvested supernatants. The SDF-1 expression level was about 10 ng/mL.

Under anesthesia, each rat was placed in the supine position and shaved and the prepuce was degloved. Ultrasound gel was applied to the penis and a shockwave applicator (CENOWAVE; HNT MEDICAL Co., Ltd., Seoul, Korea) was placed at the penis. A total of 300 shocks were delivered at an energy level of 0.1 mJ/mm2 and a frequency of 120 shocks/min. This procedure was performed three times a week with one day break for four weeks, which is similar to the treatment course used for patients with ED in clinical practice (11).

All rats underwent erectile function test after receiving treatment for four weeks. Under general anesthesia, intracavernous pressure (ICP) and mean arterial pressure (MAP) was measured. Through a midline laparotomy, carotid artery and cavernous nerves were exposed. The corpus cavernosum was cannulated with a 25-gauge butterfly needle filled with heparin (250 U/mL). A pressure transducer (Grass model S48 K; Astro-Med Inc., West Warwick, RI, USA) was connected to cannula and ICP was recorded. Then MAP was measured with A BD Intramedic PE-50 tubing (BD, Franklin Lakes, NJ, USA) inserted into carotid artery. Both ICP and MAP were recorded continuously (20,25,26). After examining ED, rats were sacrificed by intraperitoneal injection of sodium pentobarbital (50 mg/kg) followed by bilateral thoracotomy. And the penis was harvested for western blot analysis and immunohistochemistry.

By using Image-J and Image-Pro Plus (Media Cybernetics, Silver Spring, MD, USA) the images of study’s results were quantified. The statistical analysis was performed using SPSS 22.0 software (IBM, Armonk, NY, USA). Data are presented as mean ± standard deviation (SD). Multigroup comparisons were made with ANOVA. Data expressed as proportions were assessed with a Chi-square test. Values of P<0.05 were considered statistically significant difference. 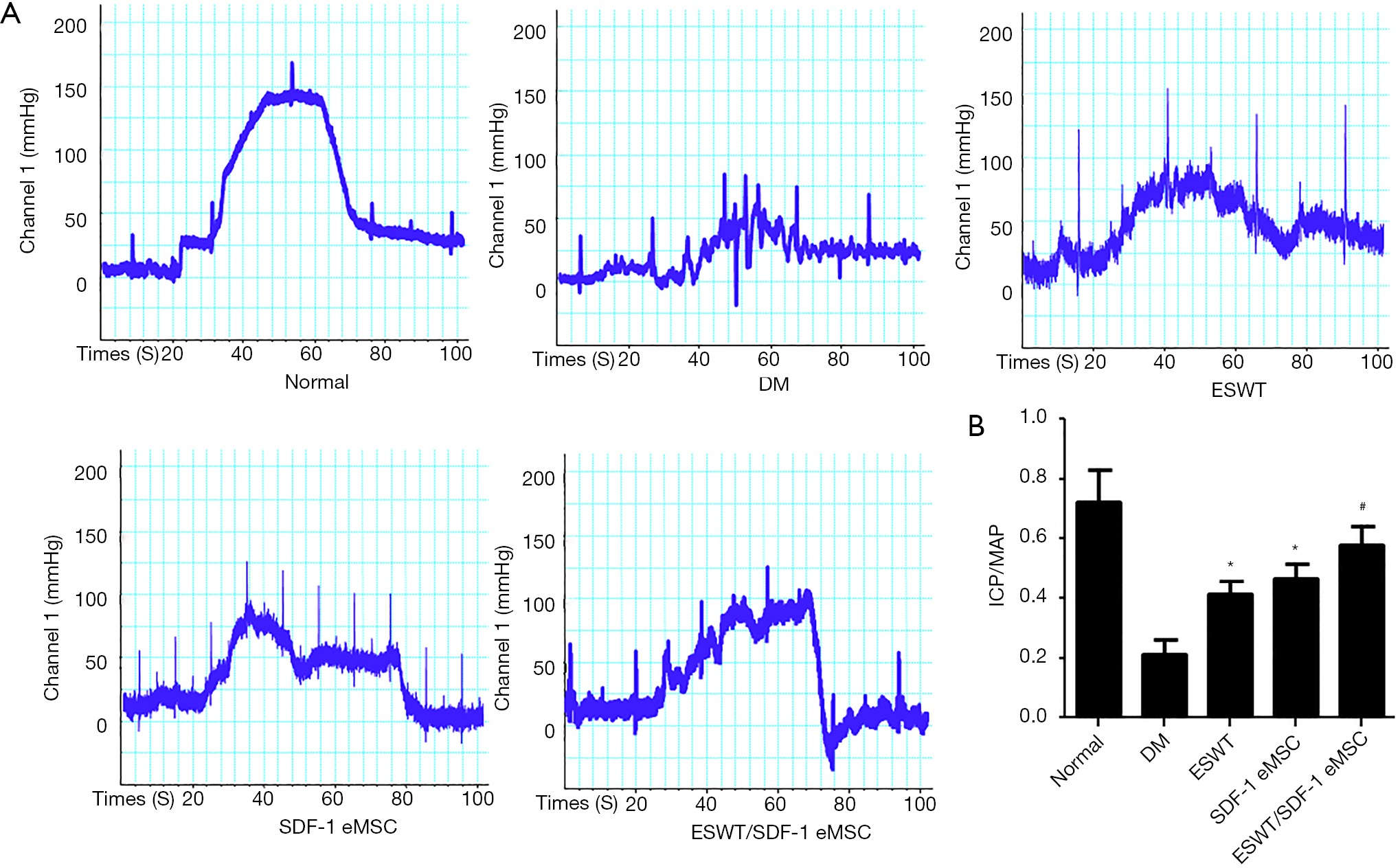 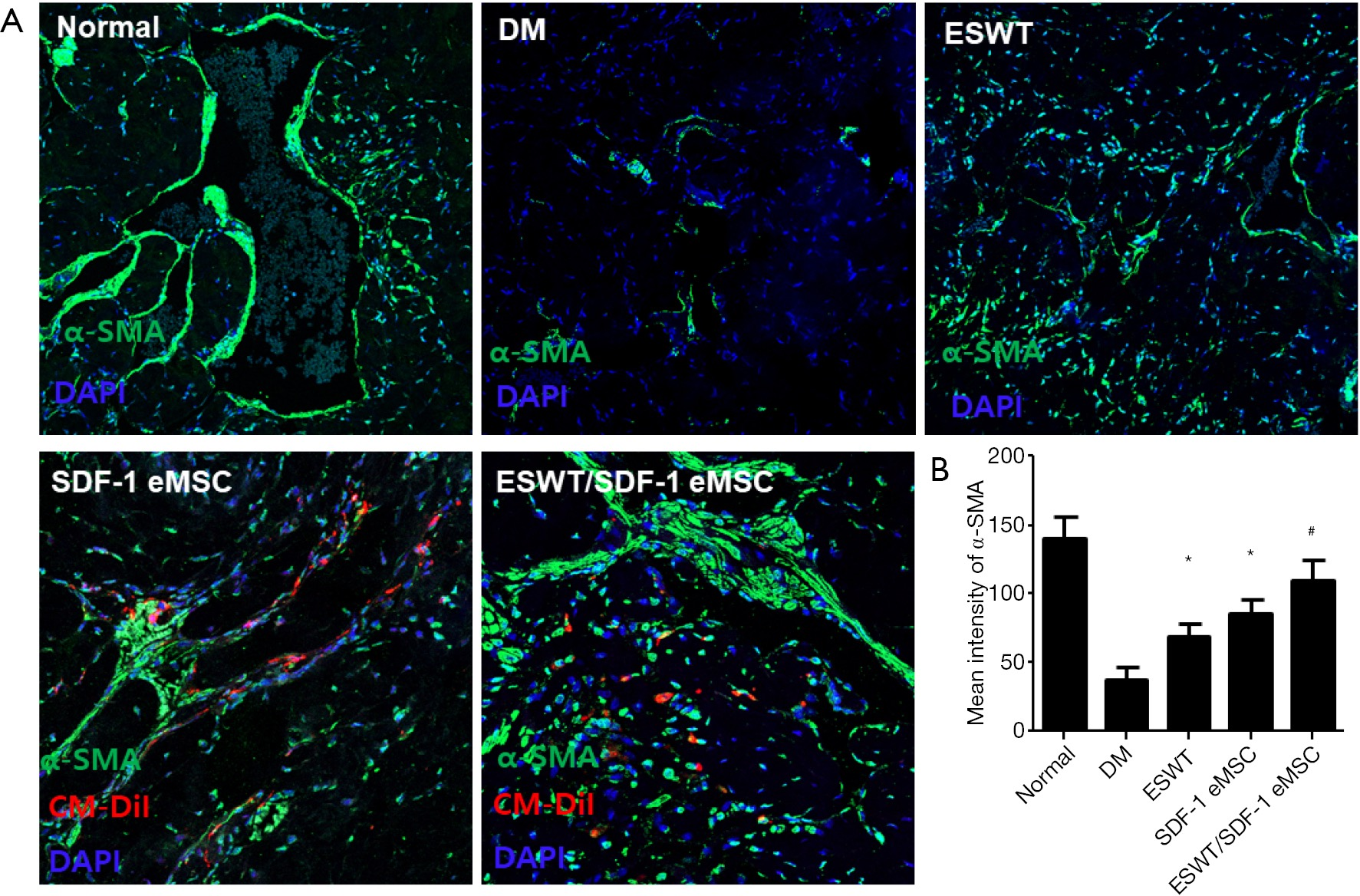 As shown in Figure 3A, CM-Dil and SDF-1 showed the highest concentrations in the group treated with ESWT + SDF-1 eMSCs (#P<0.01). As shown in Figure 3B, SDF-1 expression level in ESWT +SDF-1 eMSC group was higher than that in the group treated with SDF-1 eMSC alone. It was even higher than that in the normal group. This result reveals that ESWT can increase SDF-1 expression significantly, which can help vascularization of the corpus cavernosum by recruiting endothelial progenitor cells (21). 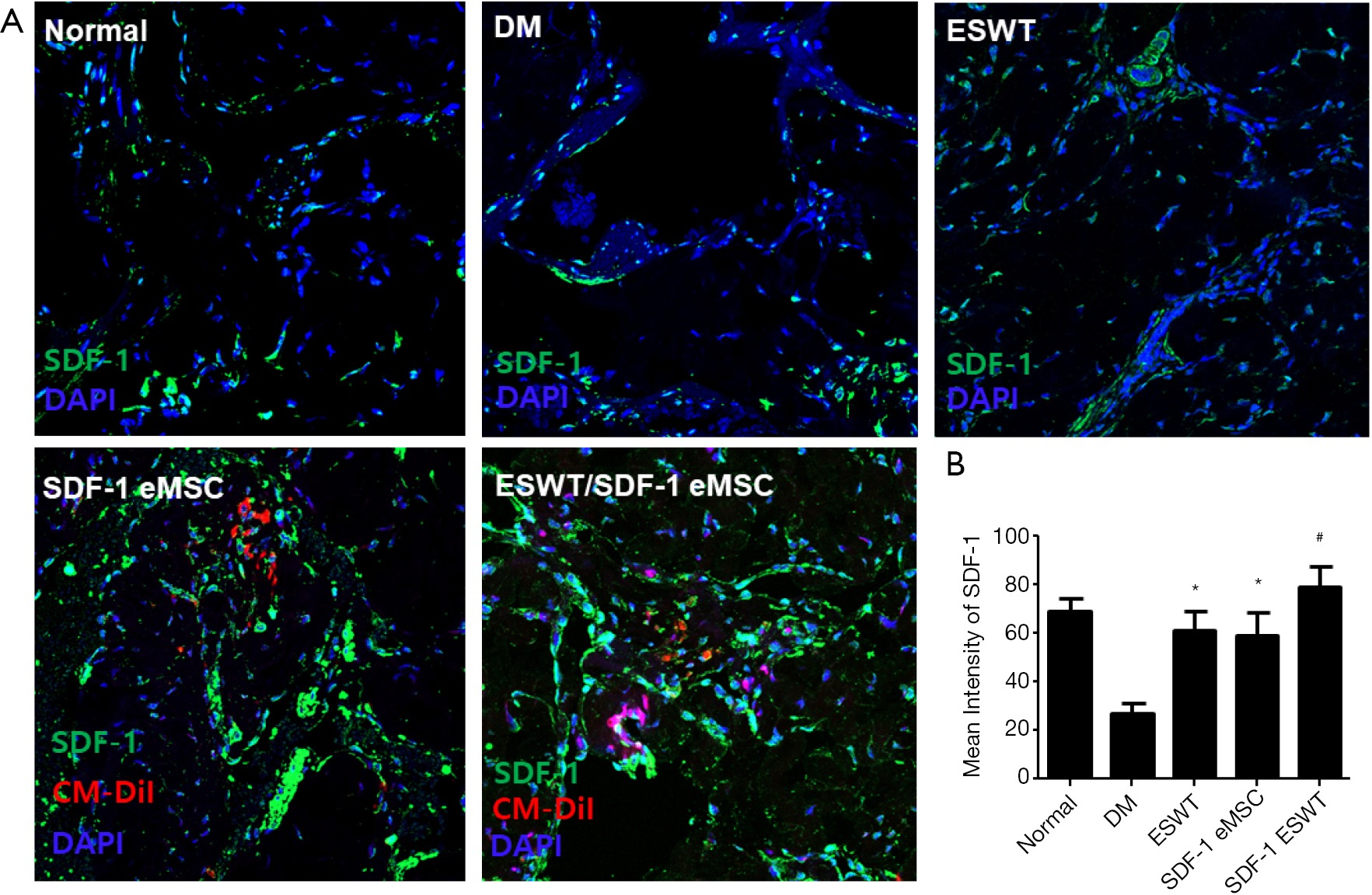 Representative images of nNOS staining in the copus cavernosum are shown in Figure 4. Figure 4A shows nNOS expression in each group. Figure 4B shows quantitative results in each group. nNOS concentration was elevated in treated groups. It was the highest in the ESWT + SDF-1 eMSC group. Which is essential for vasodilation of the corpus cavernosum. Figure 4C shows that NO and cGMP levels in the ESWT + SDF-1 eMSC group were higher than in other groups. They were most close to those of the normal group (#P<0.01). Liu et al. have suggested that NO can mediate vasodilation in smooth muscle of vessels through the NO/cGMP pathway (27). 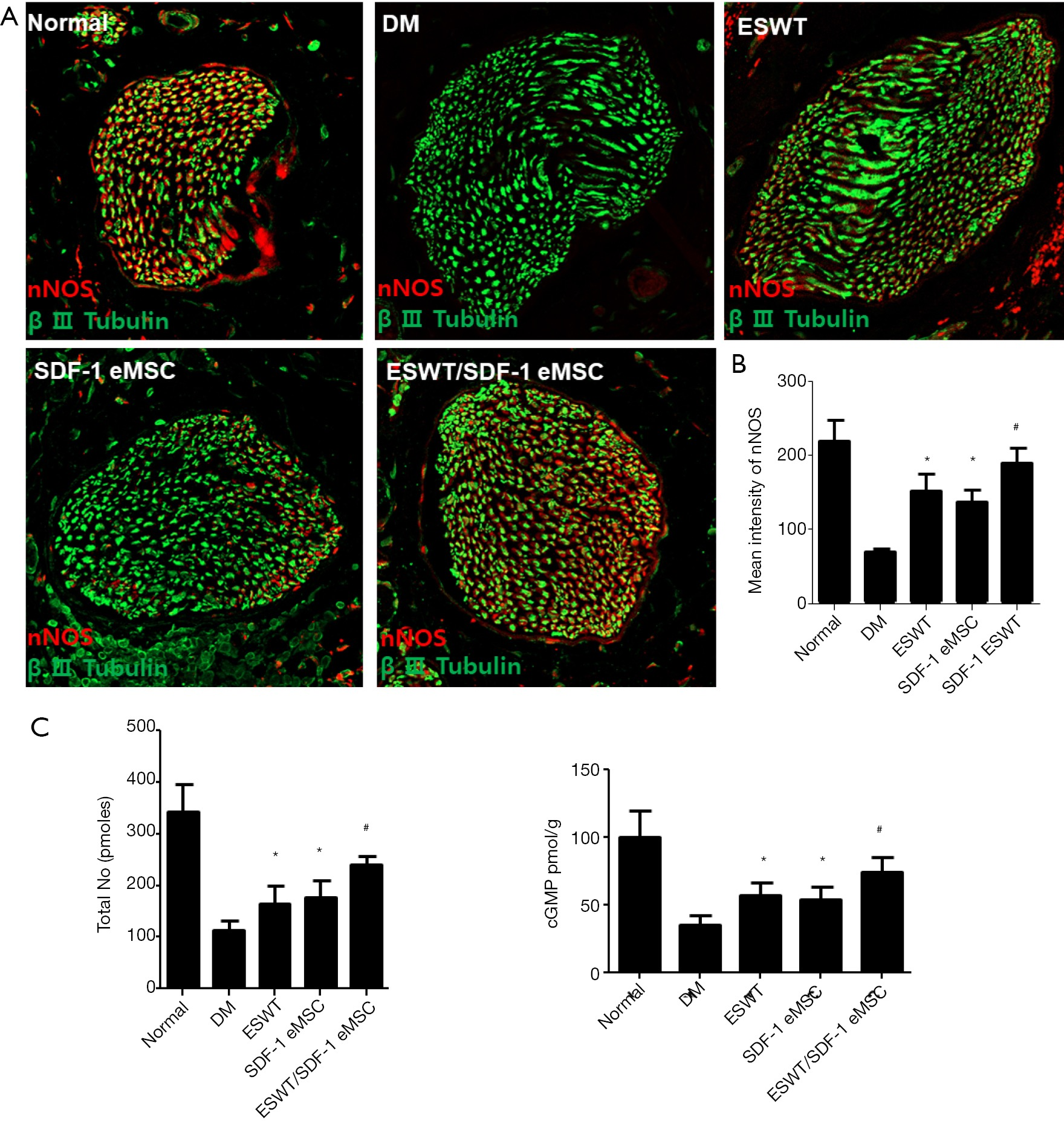 5-ethynyl-2-deoxyuridine (EdU) can be used for labeling and tracking of mesenchymal stromal cells (28). All rats had intraperitoneal injections of 50 mg/kg EdU before therapies. After four weeks, immunofluorescence staining was done to examine penile progenitor cells in the corpus cavernosum. As shown in Figure 5A, EdU positive cells were more prominent in the EWST + SDF-1 eMSC treated group and the ESWT group than those in the DM ED group and SDF-1 eMSC group. This means that ESWT can induce penile progenitor cells and enhance SDF-1 eMSCs in the corpus cavernosum. Quantitative results are shown in Figure 5B. There were more EdU positive cells in the ESWT group (*P<0.05) and the ESWT + SDF-1 eMSC group (#P<0.01) than in other groups. 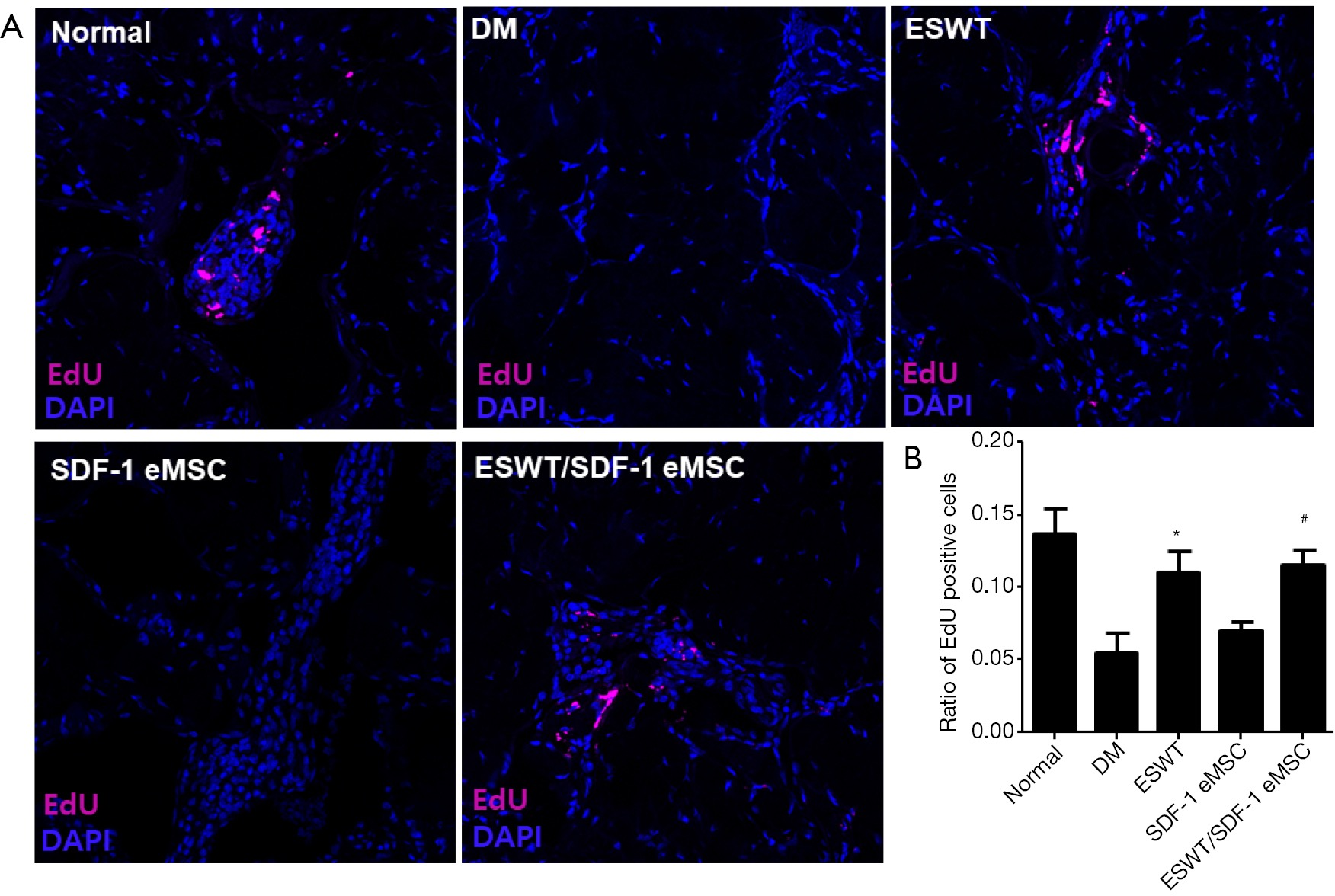 The mechanism of DM ED is considered to be due to chronic hyperglycemia that causes blood vessel spasm and vascular injury such as veno-occlusive disorder in the corpus cavernosum (23,24,29). Leading to insufficient blood supply and oxidative stress response (30). Oxidative stress response reduces endothelial nitric oxide synthase (eNOS) and nNOS in the corpus cavernosum by damaging neurocytes and endothelial cells, thus decreasing the concentration of NO known to cause DM ED (31).

ESWT and MSC have been used as treatment options for ED therapy (12,32-34). Several studies have proven that ESWT can promote angiogenesis and tissue proliferation. Lin et al. have found that a low intensity-ESWT can activate penile progenitor cells in situ by increasing angiogenesis and proliferation (35). Jeon et al. have shown that a combination of ESWT with a KH-204 herbal formulation can increase activation of antioxidant activity and penile progenitor cells in diabetic ED rats (17). One study has shown that ESWT can enhance the homing of MSCs into tissues of DM ED rats (13).

As adult multipotent stem cells, MSCs are easy to obtain from almost every tissue of the body (37). They have ability to differentiate into various types of cells such as muscle cells, neuron cells, and endothelial cells (38-40) essential for treating ED. A previous study has proven that MSC treatment can improve ED recovery by promoting cellular growth and prevent apoptosis of injured tissues (22,41,42). Furthermore, during tissue repair and cell proliferation, SDF-1 levels are likely to be high (43) and it has been proven that SDF-1 can accelerate angiogenesis by recruiting endothelial progenitor cells into injured tissues (21) and restore neuron cells by driving injected stem cells to injured nerves (20). A previous study has reported that BM-MSC expressing SDF-1 can express more SDF-1 than ordinary BM-MSC (22). Thus, in this study, we expected greater benefits by implanting SDF-1 expressing MSCs and used it for bilateral corpus cavernosum injections.

Oxidative stress due to vascular damage by hyperglycemia can cause neurocyte damage and reduce eNOS levels in the corpus cavernosum. Decreased NO level can induce ED (31). In the present study, NO and cGMP levels in the ESWT + SDF-1 eMSC group were higher than in other groups, which mediates vasodilation in smooth muscles of vessels to improve ED.

STZ-induced DM ED rats are classed as type 1 DM rats. However, only 10% of DM cases are type 1 DM while 90% of cases are type 2 DM in a clinical setting (45), which can be a limitation of this study.

In conclusion, for DM ED treatment, ESWT combined with SDF-1 eMSC treatment is more effective than using a single therapy. Such combination could be a potential and effective synergistic treatment for DM ED. Considering that EWST + SDF-1 eMSC therapy is a localized treatment, we believe that this therapy can help drugs penetrate into the corpus cavernosum and enhance absorption of drugs. Clinical trials are needed to determine whether additional oral medications or IV injections could enhance treatment efficacy in the future.

Funding: This research was supported by Basic Science Research Program through the National Research Foundation of Korea (NRF) funded by the Ministry of Education (2020R1I1A1A01074732). Also supported by Research Fund of Seoul St. Mary’s Hospital, The Catholic University of Korea (grant number: ZC20DESI0798).

Reporting Checklist: The authors have completed the ARRIVE reporting checklist. Available at http://dx.doi.org/10.21037/tau-21-79

Conflicts of Interest: All authors have completed the ICMJE uniform disclosure form (available at http://dx.doi.org/10.21037/tau-21-79). The authors have no conflicts of interest to declare.

Ethical Statement: The authors are accountable for all aspects of the work in ensuring that questions related to the accuracy or integrity of any part of the work are appropriately investigated and resolved. The study was conducted in accordance with the Declaration of Helsinki (as revised in 2013). Experiments were performed under a project license (NO.: CUMC-2016-0310-01) granted by the Institutional Animal Care and Use Committee of the Catholic University of Korea, in compliance with institutional guidelines for the care and use of animals.