The incidence of renal stones increased rapidly worldwide and its prevalence was about 1–19% across the world during the past twenty years (1,2). The cost of renal stones was about $3.79 billion in 2007 in the USA, and it would increase to $4.57 billion in 2030 (3). The recurrence of renal stones occurred in about half of patients five years after lithotripsy (2). Shock wave lithotripsy (SWL), percutaneous nephrolithotomy (PCNL) and retrograde intrarenal surgery (RIRS) are commonly used for removing renal stones. RIRS using flexible ureteroscope was recommended as the first choice for patients with renal stones <2 cm (4,5). RIRS was safe that a minority of patients had complications, including postoperative fever (8.5%), ureteral perforation (3.5%) and urinary tract infection (2.4%) (6).

We retrospectively reviewed renal stone patients who underwent RIRS using flexible ureteroscope in West China Hospital, Sichuan University from July 2017 to June 2019. Renal stones were diagnosed by ultrasound of the urinary system or abdominal computed tomography. All these patients had unilateral stones. Patients who received SPECT before and after surgery were included in the study. The study was conducted in accordance with the Declaration of Helsinki (as revised in 2013). The study was approved by the West China Hospital of Sichuan University Medical Research Ethics Committee approved the study (2020508) and individual consent for this retrospective analysis was waived.

All the surgeries were performed by one experienced surgeon. A 4.7 Fr double J ureteral catheter was placed two weeks before surgeries. With the patient in the lithotomic position, a 14/16 Fr ureteral access sheath was inserted into the ureter through a guidewire. Normal saline was irrigated at 160 cmH2O and 0.1 L/min by pressure pumps. Stones were fragmented using a 200 µm laser fiber with holmium laser. Pulse energy and frequency for fragmenting stones were 1.5 J and 20 Hz. Fragments >2 mm were extracted using a nitinol basket. The remaining fragments was dusted when laser was set as 0.8 J and 30 Hz. A 4.7 Fr double J ureteral catheter was again applied at the end of the surgery, and were removed 2–3 weeks later.

Mean and standard deviation were calculated for quantitative factors when they were symmetrically distributed, they were presented as mean and standard deviation, and analyzed using analysis of variance (ANOVA). Otherwise, they were shown as median and interquartile range, and compared by Kruskal-Wallis test. Categorical factors were presented as quantity and percentage, and analyzed using Chi-square test or Fisher’s Exact test. We used logistic regression analysis and least absolute shrinkage and selection operator (LASSO) regression analysis to find factors associated with the improvement and deterioration of renal function, and two models for predicting the change of renal function after RIRS were also built. Nomograms of models were drawn. The sensitivity, specificity and predictive accuracy of the models were calculated. All the statistical analyses were conducted using R (version 3.6.3). P value <0.05 was considered as significantly different.

Characteristics of patients and stones

A total of 120 patients were included in the study. About 21 (17.5%), 79 (65.8%) and 20 (16.7%) patients had improved, stable and deteriorated renal function of operative site postoperatively, respectively. The mean age was 47.4±11.7 years, and about two-thirds of patients were males. Half of the patients had received surgeries for removing renal stones, including SWL, RIRS, PCNL and open nephrolithotomy, with no significant difference between three groups (P=0.559). Based on GFR of the operative site, 40.0% patients had mild renal impairment, followed by moderate renal impairment (28.3%), normal renal function (21.7%) and severe renal impairment (10.0%), and GFR grade was statistically different between three groups (P=0.046). About half of the patients had ureteral stone or ureterostenosis. The median renal stone volume was 1.80 cm3 (Table 1). 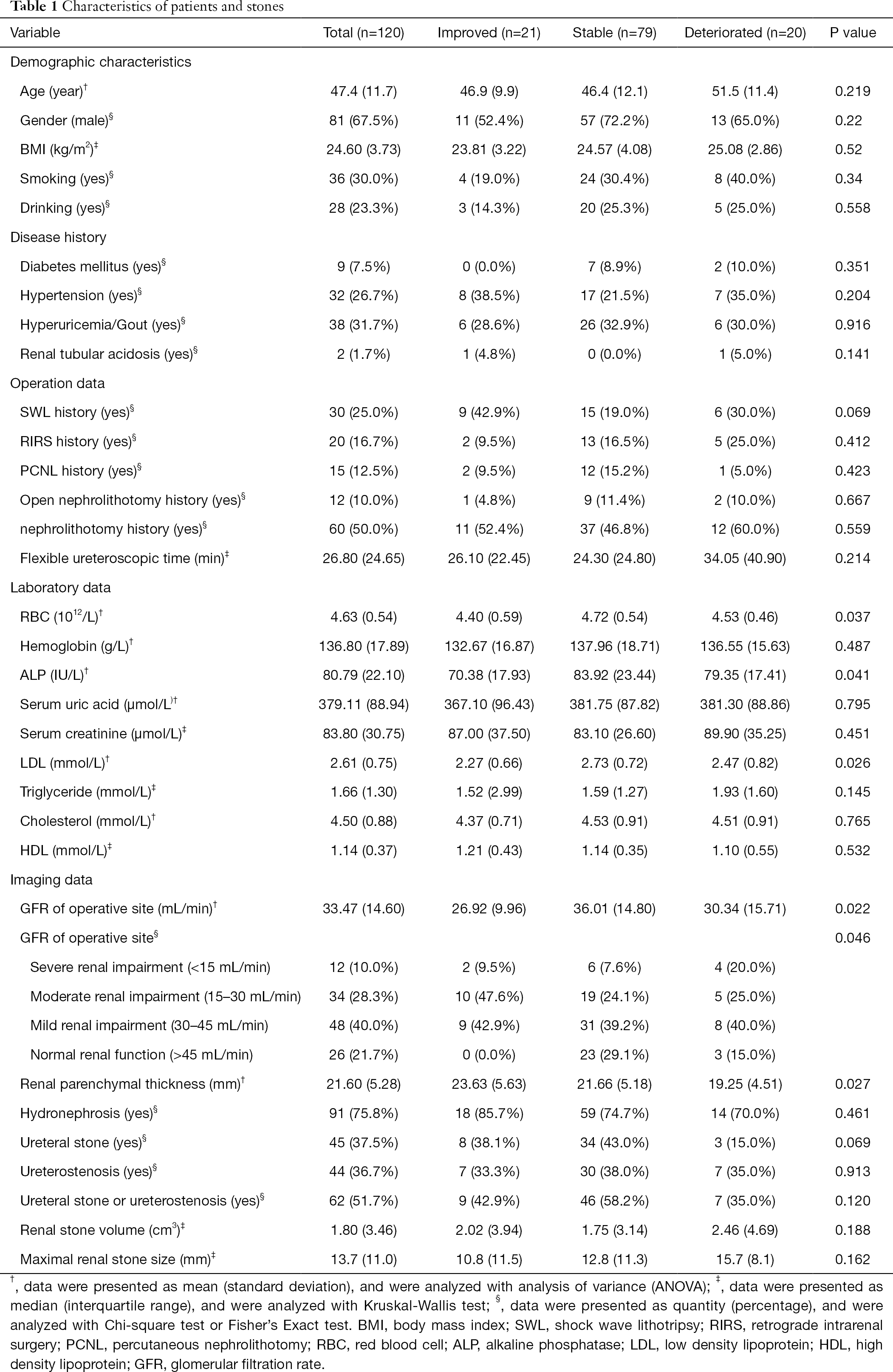 Predictors for the improved renal function after RIRS and predictive model 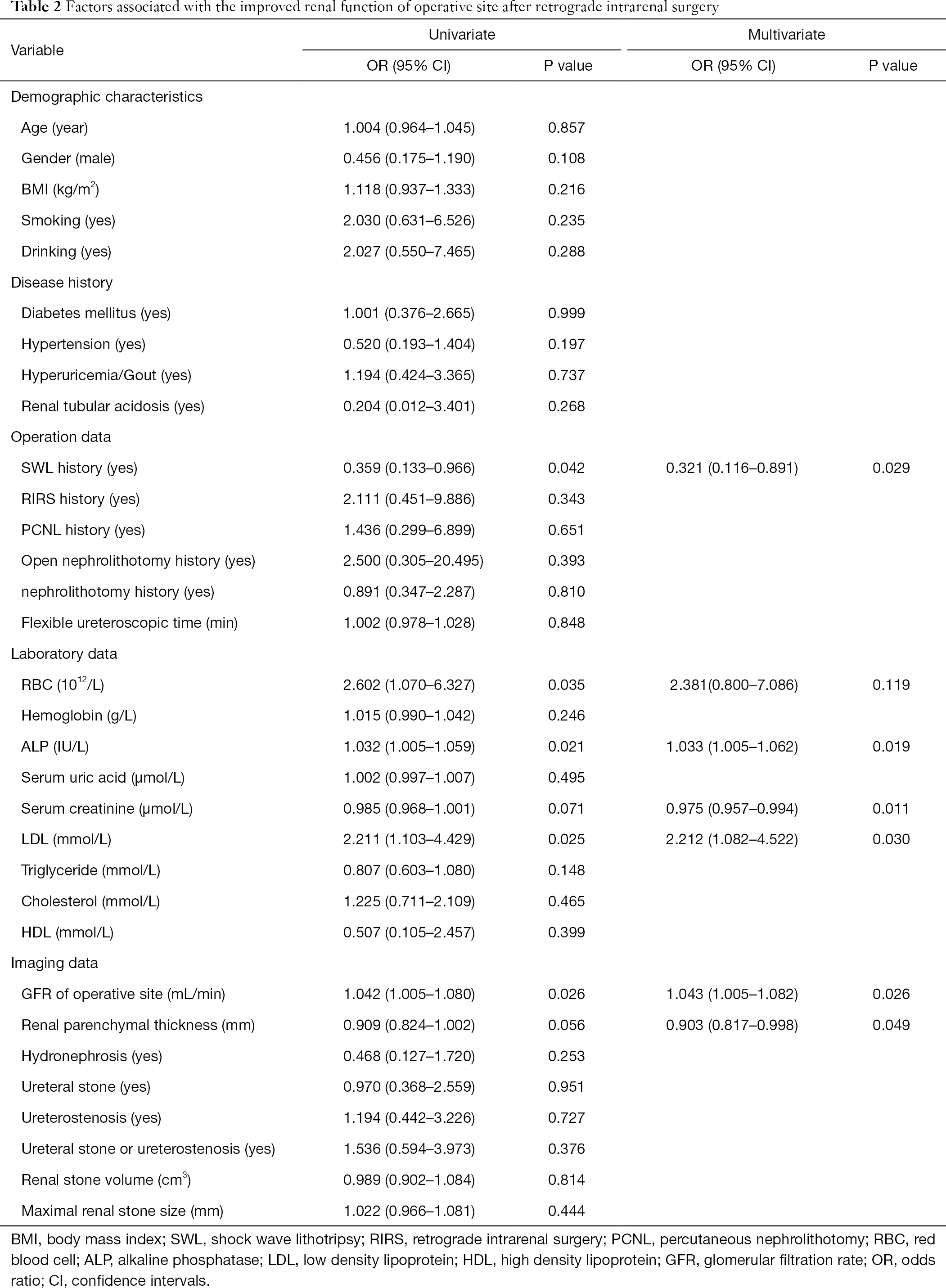 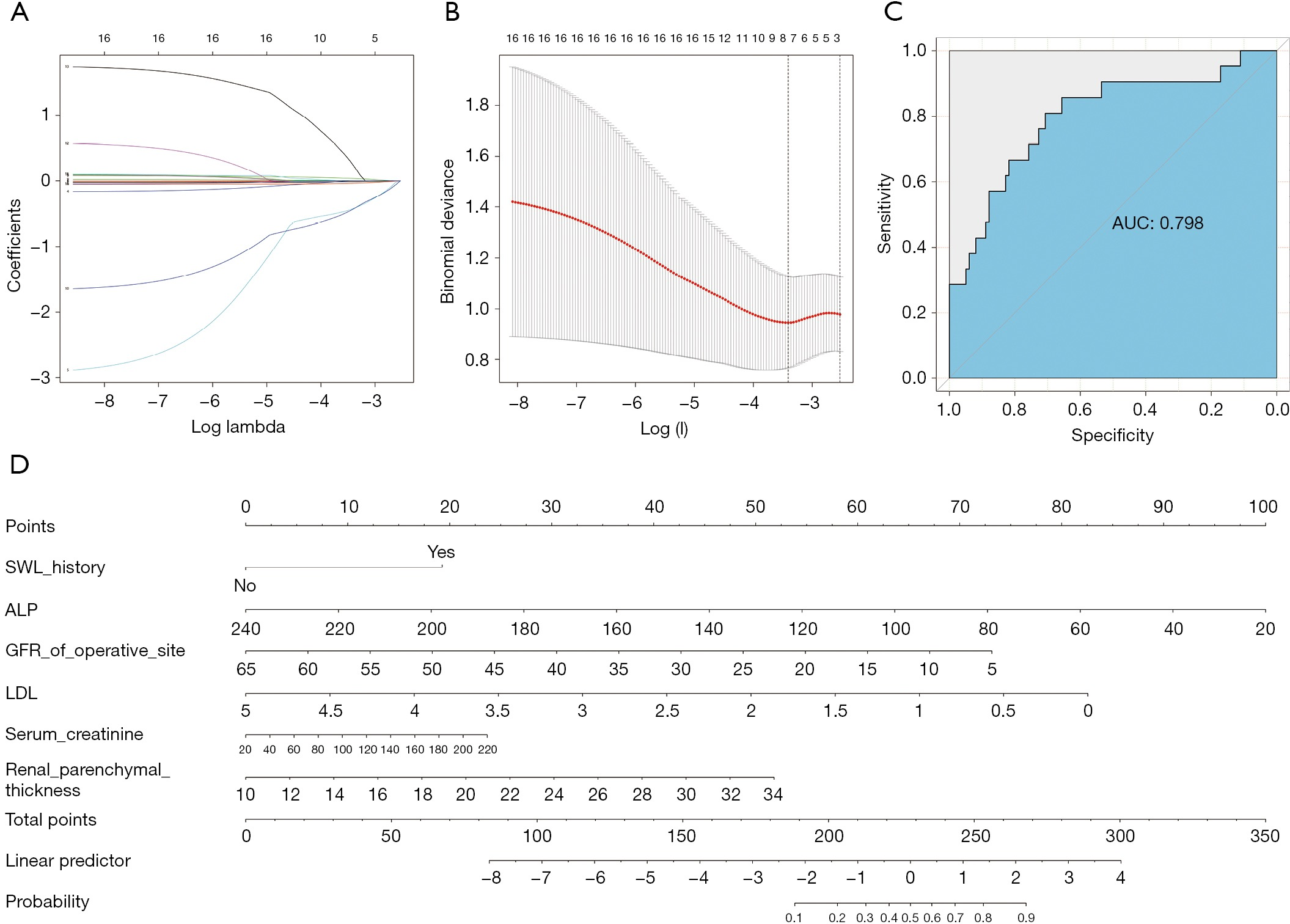 Due to the limitation of sample size, we only selected six factors both occurred in logistic and LASSO regression analyses to build a model for predicting the improvement of renal function, including SWL history, ALP, GFR of the operative site, LDL, renal parenchymal thickness and serum creatinine. The area under the curve (AUC) of receiver operating characteristic (ROC) was 0.798 (Figure 2C). We also performed an internal four-fold cross-validation for 1000 times, and the mean AUC of ROC was 0.730 (95% CI, 0.728–0.732). To decrease misprediction rate to supervise patients’ follow-up, the cut-off value of probability of improved renal function was set as 0.256, and the sensitivity and specificity were 0.667 and 0.828 respectively, with the predictive accuracy of 0.800. To visualize the predictive model, a nomogram was drawn (Figure 2D). Hodges-Lehmmann test showed that there was no mismatch between predictive model and retrospective cohort (χ2=8.473, P=0.389).

Predictors for the deteriorated renal function after RIRS and predictive model 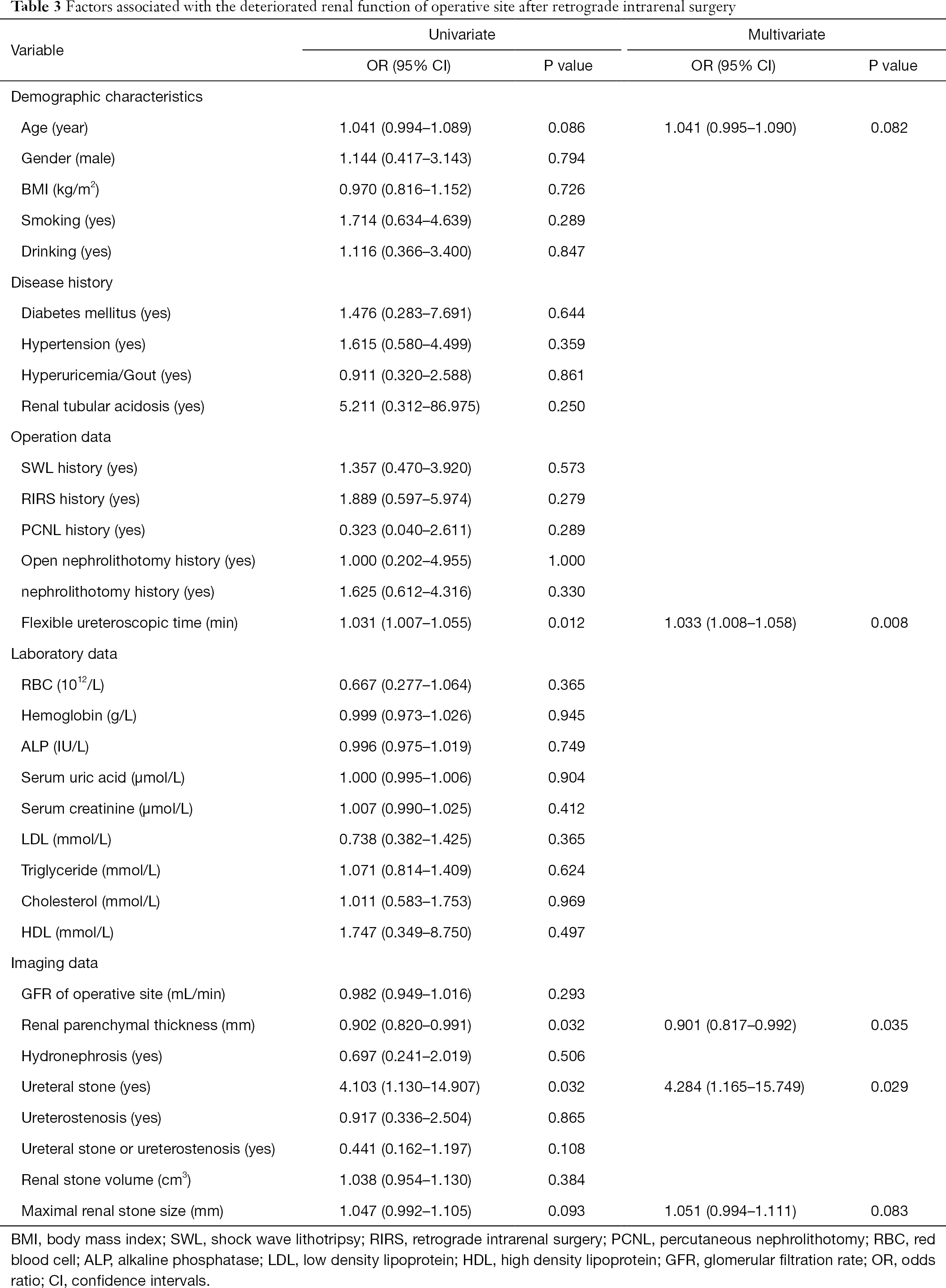 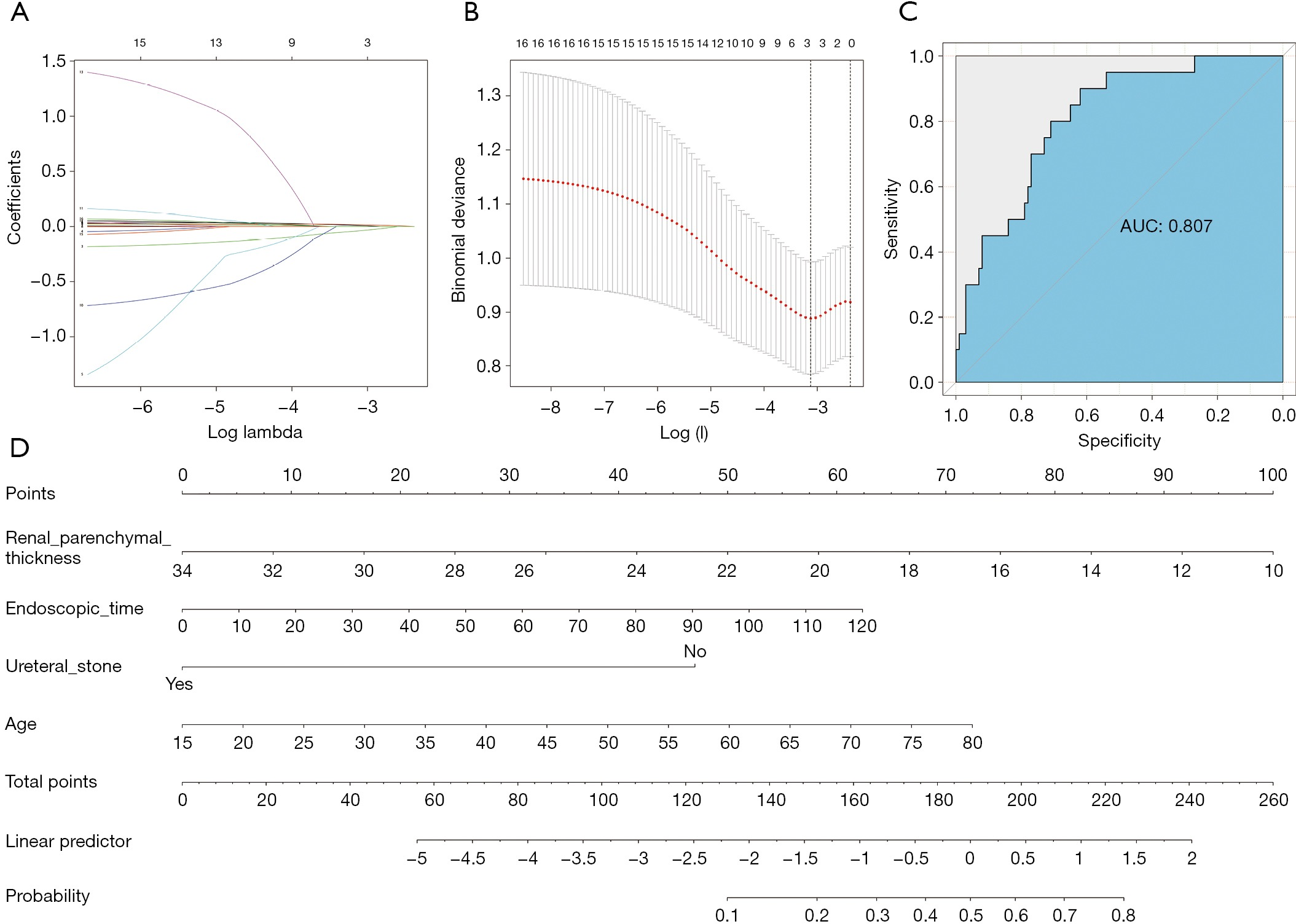 A predictive model for deteriorated renal function was developed based on four factors both occurred in logistic and LASSO regression analyses, including age, renal parenchymal thickness, endoscopic time and ureteral stone. The AUC of ROC was 0.807 (Figure 3C). After 1,000 times cross validation, it was 0.745 (95% CI, 0.743–0.748). When the cut-off value of probability of deteriorated renal function was 0.162, the sensitivity (0.800) and specificity (0.710) were high. The predictive accuracy was 0.725. The predictive nomogram was also demonstrated (Figure 3D). Hodges-Lehmmann test indicated that indicated that the predictive accuracy of the nomogram model was good (χ2=3.977, P=0.859).

Compared with previous studies, we built models with high predictive accuracy for predicting the improvement and deterioration of renal function after RIRS. Using these models, urologists could screene out patients whose renal function are more likely to decrease postoperatively and gave some suggestions on how to prevent the recurrent renal stones, like sufficient drinking water (>2,500 mL/day), less salt and protein intake, more fruits intake rich in citrate and more exercise. Frequent urinary ultrasonography was also important during the follow-up to supervise renal stones and hydronephrosis as it was easy to perform without any radiation. Additionally, urologists could communicate with these patients about the renal function deterioration after surgery to reduce potential medical disputes and improve physician-patient relationships.

The study had several advantages and features. First, SPECT was used to precisely measure the renal function of operative site. Second, renal stone volume was accurately measured using IntelliSpace Discovery platform (Philips), which was firstly applied for studying renal stones. Third, we developed models for predicting the change of renal function after RIRS, which may support clinical decision-making.

the renal function of most renal stone patients did not decrease after RIRS. For patients with potential deterioration of renal function postoperatively, urologists could shorten flexible ureteroscopic time to prevent the occurrence of this outcome.

Reporting Checklist: The authors have completed the STROBE reporting checklist. Available at http://dx.doi.org/10.21037/tau-20-1521

Conflicts of Interest: All authors have completed the ICMJE uniform disclosure form (available at http://dx.doi.org/10.21037/tau-20-1521). The authors have no conflicts of interest to declare.

Ethical Statement: The authors are accountable for all aspects of the work in ensuring that questions related to the accuracy or integrity of any part of the work are appropriately investigated and resolved. The study was conducted in accordance with the Declaration of Helsinki (as revised in 2013). The study was approved by the West China Hospital of Sichuan University Medical Research Ethics Committee approved the study (2020508) and individual consent for this retrospective analysis was waived.