The underlying mechanism promoting tumor progression has been elusive. Almost all tumors harbor a defective negative feedback loop of signaling by transforming growth factor-β (TGF-β). TGF-β signaling consists of Smad and non-Smad pathways (1). In advanced cancer cells, the non-Smad pathways predominate and progress leading to deregulated signaling cascades (2). This deregulation creates a unique TGF-β mediated tumor microenvironment that sets off a vicious cycle and promotes many of the hallmarks of tumor progression, including sustained angiogenesis, immune system evasion, proliferation, loss of the apoptotic response, epithelial-to-mesenchymal transition (EMT) and metastasis. These combined effects lead to uncontrolled tumor growth and spread, for which we coin the term “TGF-β mediated vicious cycle in tumor progression”. Recent evidence demonstrated that TGF-β mediates aggressive cancer including auto-induction of TGF-β1 and increased expression of DNA methyltransferases (DNMTs) (2,3). This latter observation suggests that the expression of these methylated genes may be an important event in TGF-β mediated tumor progression.

TGF-β is a potent pleiotropic cytokine that regulates mammalian development, differentiation, and homeostasis in essentially all cell types and tissues. Its signaling is mediated through Smad and non-Smad pathways to regulate transcription, translation, microRNA biogenesis, protein synthesis and post-translational modifications (1,18,19). TGF-β binds to the type II TGF-β receptor (TβRII) which recruits and transphosphorylates the type I TGF-β receptor (TβRI) (20). The activated TβRI then phosphorylates Smad2 and Smad3 at the c-terminus. Activated Smad2/3 forms heterooligomers with Smad4 and migrates to the nucleus to regulate transcription. The Smad complexes interact with a myriad of transcriptional co-regulators and other factors to mediate target gene expression or repression (21,22). Smad2/3 also interacts with and regulates microRNA processing. TGF-β also signals through a number of non-Samd pathways, including m-TOR, RhoA, Ras, MAPK, PI3K/AKT, PP2A/p70s6K, and JNK (1,23,24). Finally, a direct action of the activated TβRI can interact with eEF1A1 to block protein synthesis (19). Dysregulation of both Smad and non-Smad pathways is implicated in aberrant TGF-β signaling and its pro-tumorigenic events in advanced cancer (3).

TGF-β is a key regulator for DNA methylation through an increase in DNMTs expression, especially in cancer (3,12). There exists a differential effect of TGF-β mediated DNMT activities between benign and malignant cells. In benign cells, TGF-β inhibits DNMT expression (25,26). In cancer cells, TGF-β stimulates DNMT expression (3,12). It should be noted that, in light of the importance of both TGF-β signaling and DNA methylation in tumor progression, the majority of the methylated genes in cancer are relevant to TGF-β signaling (12). This is consistent with our observation that over-expression of TGF-β and/or DNMTs is associated with aggressiveness and poor prognosis in prostate cancer (3,27).

In this review, we will focus our discussion in prostate cancer as an example, because the pattern of DNA methylation is organ specific. We surveyed the recent literature to identify the existing methylated genes in prostate cancer and attempt to determine which ones are mediated by TGF-β signaling. We have identified over 80 genes in which promoters are methylated in prostate cancer. This is a significant increase from 2006, when only 30 genes had been identified (28). Interestingly, the non-Smad pathways of known relevance to TGF-β are more often associated with de novo gene methylation (3,29). In contrast, the Smad-mediated pathways often lead to promoter de-methylation of genes (see below). In Table 1, we summarize the known TGF-β relevant genes in which the promoter becomes methylated in prostate cancer. We also identified those which have been known to be induced by TGF-β. Since, in advanced cancer cells, TGF-β induces the activation of Erk, JNK, AKT, and NF-κB (1,3), the above methylated gene have been documented in the literature to be related with one of the above transcription factors, thus are considered as TGF-β relevant. 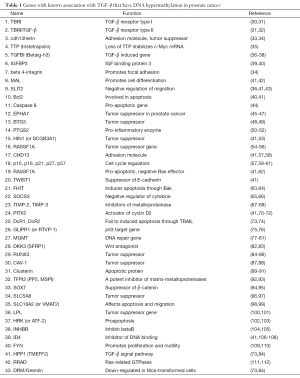 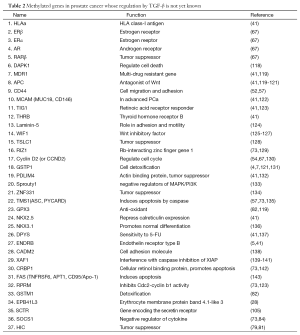 A characteristic of DNA methylation in cancer is its heterogeneity. Despite of this variation, some trends can be discerned. We rationalize that genes that are wildly methylated are likely involved during early stages of tumor development, such as GSTP-1 (4), which may be used for the early detection of prostate cancer. Many investigators have used specific methylation pattern for prediction of cancer progression. However, during progression of prostate cancer, the tumor becomes increasingly heterogeneous, it will be difficult to pinpoint which genes are methylated that can be used as a prognostic marker and such efforts have been met with mixed results (144). It is reasonable to assume that as tumors progress, there will be more genes that undergo promoter methylation and demethylation. Therefore, the development of a rapid analysis of DNA methylation profile make it possible to follow the methylation patterns which may be used as an indication of disease progression.

Based on the present review, it is apparent that TGF-β signaling and DNA methylation are two important events in prostate cancer development and progression. In tumor progression, the deregulated TGF-β signaling mediates an increase in the number of genes undergoing DNA hypermethylation. These genes are generally associated with prevention of apoptosis, promotion of proliferation, facilitation of cell migration and evasion of the immune surveillance, resulting in tumor progression. In the era of personalized medicine, it becomes more important that we clearly define which genes are affected by TGF-β signaling and which genes are promoter hypermethylated during prostate cancer progression. Recent reports point out that some dietary and lifestyle interventions in cancer patients are mainly mediated through a reduction in DNA methylation (125,145,146), while others may lead to both gains and losses (147). It is possible that these dietary and lifestyle factors may be mediated at least partly through a normalization of the vicious cycle of TGF-β signaling in cancer microenvironment (148).

Conflicts of Interest: M. McClelland and D. Mercola are cofounders Proveri Inc., which is engaged in translational development of aspects of the subject matter. The other authors have no conflicts of interest to declare.