Prostate cancer (PCa) is a common malignancy in men. In developed countries, PCa ranks first among all male malignancies for incidence, and its mortality rate is also high (1-3). In China, the incidence of PCa has markedly increased with rising economic levels, lifestyle changes, aging, and improvements in medical standards (4,5). In early PCa, the symptoms are atypical, and they only gradually become obvious at the middle or advanced stages. Thus, exploration of the mechanism of PCa development could be of great significance in elevating the detective and therapeutic efficacy for the disease (6-8).

Circular RNA (circRNA) is a newly discovered non-coding RNA with a special closed structure. It is abundantly distributed in the cytoplasm of eukaryotes, and is mainly produced by the variable shear processing of precursor messenger RNAs (mRNAs) (9,10). In recent years, circRNAs have been discovered to have vital regulatory functions. Serving as competing endogenous RNAs (ceRNA), circRNAs sponge target microRNAs (miRNAs) to suppress their inhibitory effect on target genes (11-13). MiRNAs are non-coding RNAs of 19-25 nucleotides in length. They can regulate the expression levels of target gene mRNA before and after transcription, and have extremely important biological functions. Some evidence suggests that circRNA homeodomain-interacting protein kinase 3 (circHIPK3) downregulates miR-124/miR-29b expression and is associated with the status of gastric cancer (14). Circ_0044516 downregulates the expression of miR-29a-3p in PCa, and plays an important role in the survival and metastasis of PCa cells (15). Thus, through their regulation of miRNAs, circRNAs play an important role in a variety of cancers.

Additionally, circRNAs exert biological functions by binding to RNA-binding proteins or interacting with other RNAs (13,16). Notably, circRNAs are conserved in different species, and exert tissue specificity. Compared to linear RNAs, circRNAs are more stable due to their resistance to ribonuclease (RNase) (17-19). Circ_0061140 has been reported to have multiple functions in the regulation of cell phenotypes (20).

Following a gene chip profiling analysis of differentially expressed circRNAs in PCa, circ_0061140 was selected as the focus of the present study. Its expression levels in collected PCa samples were determined, and its regulatory effects on the development of PCa were examined.

We present the following article in accordance with the ARRIVE Guidelines reporting checklist (available at http://dx.doi.org/10.21037/tau-20-1477).

A total of 43 paired PCa tissues and adjacent normal tissues were surgically resected from patients undergoing radical prostatectomy for PCa in the Urology Department of the Sir Run Run Shaw Hospital, Zhejiang University School of Medicine (Zhejiang, China). Patients with recurrent or metastatic PCa were excluded. The clinical data of the patients were recorded.

After being cultured to 50−70% confluence in 6-well plates, cells were transfected with plasmids constructed by GenePharma (Shanghai, China), using Lipofectamine 2000 (Invitrogen, Carlsbad, CA, USA), and collected for use 48 hours later.

Cells were inoculated in a 96-well plate with 2×103 cells per well, and a Cell Counting Kit-8 (CCK-8) assay (Dojindo Laboratories, Kumamoto, Japan) was carried out to measure cell proliferation. At appointed times, the absorbance value of each sample was recorded at 490 nm, and viability curves was plotted.

Cells were inoculated in a 6-well plate with 200 cells per well and cultured for 2 weeks. The culture medium was replaced once in the first week and twice in the second week. Upon completion of the culture, the visible colonies were washed in phosphate-buffered saline (PBS), fixed in methanol for 20 minutes, and dyed with 0.1% crystal violet for 20 minutes. Finally, images were captured, and the number of colonies was calculated.

HEK293T cells were inoculated in a 24-well plate and then co-transfected with miR-1193 mimic/NC mimic and circ_0061140-WT/circ_0061140-MUT using Lipofectamine 2000. After 48 hours, the cells were lysed to determining the relative level of luciferase activity.

This study was approved by the Key Laboratory for Analytical Science of Food Safety and Biology, Ministry of Education, Fuzhou University. Ten male nude mice (8 weeks old) were randomly assigned to 1 of 2 groups (n=5 per group). The mice were subcutaneously administered with 22RV1 cells transfected with sh-NC or sh-circ_0061140 via the armpit. Another 10 mice were administered with DU-145 cells transfected with sh-NC or sh-circ_0061140 using the same method. Five weeks later, the mice were sacrificed and the PCa tissues were collected. Tumor volume = (width2 × length)/2.

GraphPad Prism 5 V5.01 (La Jolla, CA, USA) was used for the data analyses. Data were expressed as mean ± standard deviation. Differences between 2 groups were analyzed using the t-test, and the chi-square test was employed to analyze the relationships between the level of circ_0061140 and clinical data of PCa. Pearson’s correlation test was undertaken to evaluate the relationship between 2 genes in PCa tissues. A statistically significant difference was indicated by P<0.05.

The study was conducted in accordance with the Declaration of Helsinki (as revised in 2013). The experiments involving human were approved by the Medical Ethics Committee of the Sir Run Run Shaw Hospital, Zhejiang University Medical College (No.: 20200803-37) and informed consent was obtained from each participant. The experiments involving animal were approved by the Key Laboratory for Analytical Science of Food Safety and Biology, Ministry of Education, Fuzhou University, and were conducted in accordance with the “Guide to the Care and Use of Experimental Animals” (2016), and national or institutional guidelines on the care and use of animals. 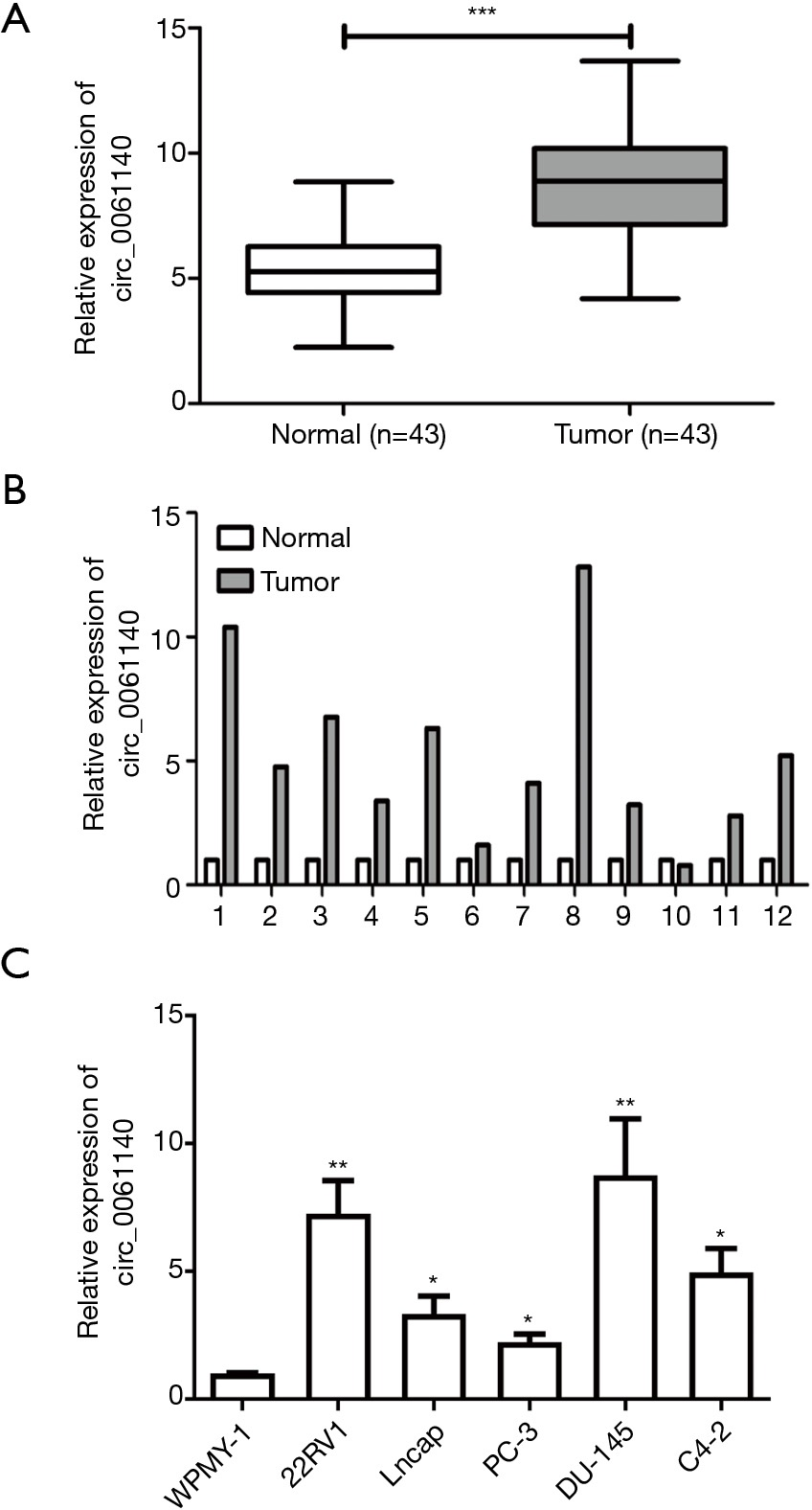 Based on the median level of circ_0061140, 43 patients with PCa were classified into 2 groups. An analysis of the clinical data of the PCa patients, showed that circ_0061140 expression was positively correlated to the Gleason score and tumor size (Table 1).

Knockdown of Circ_0061140 suppressed the proliferative potential of PCa 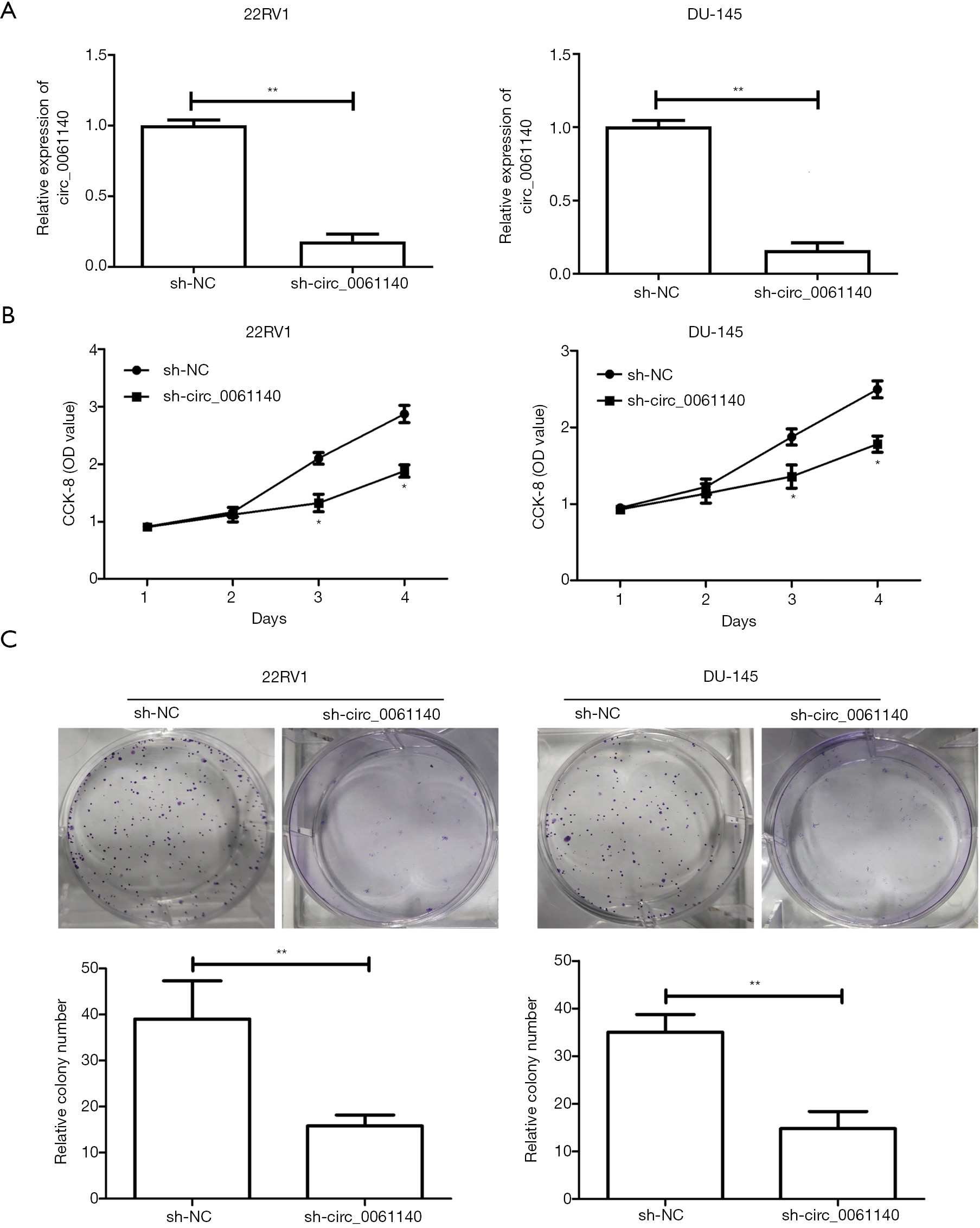 In vivo function of Circ_0061140 in the tumorigenesis of PCa 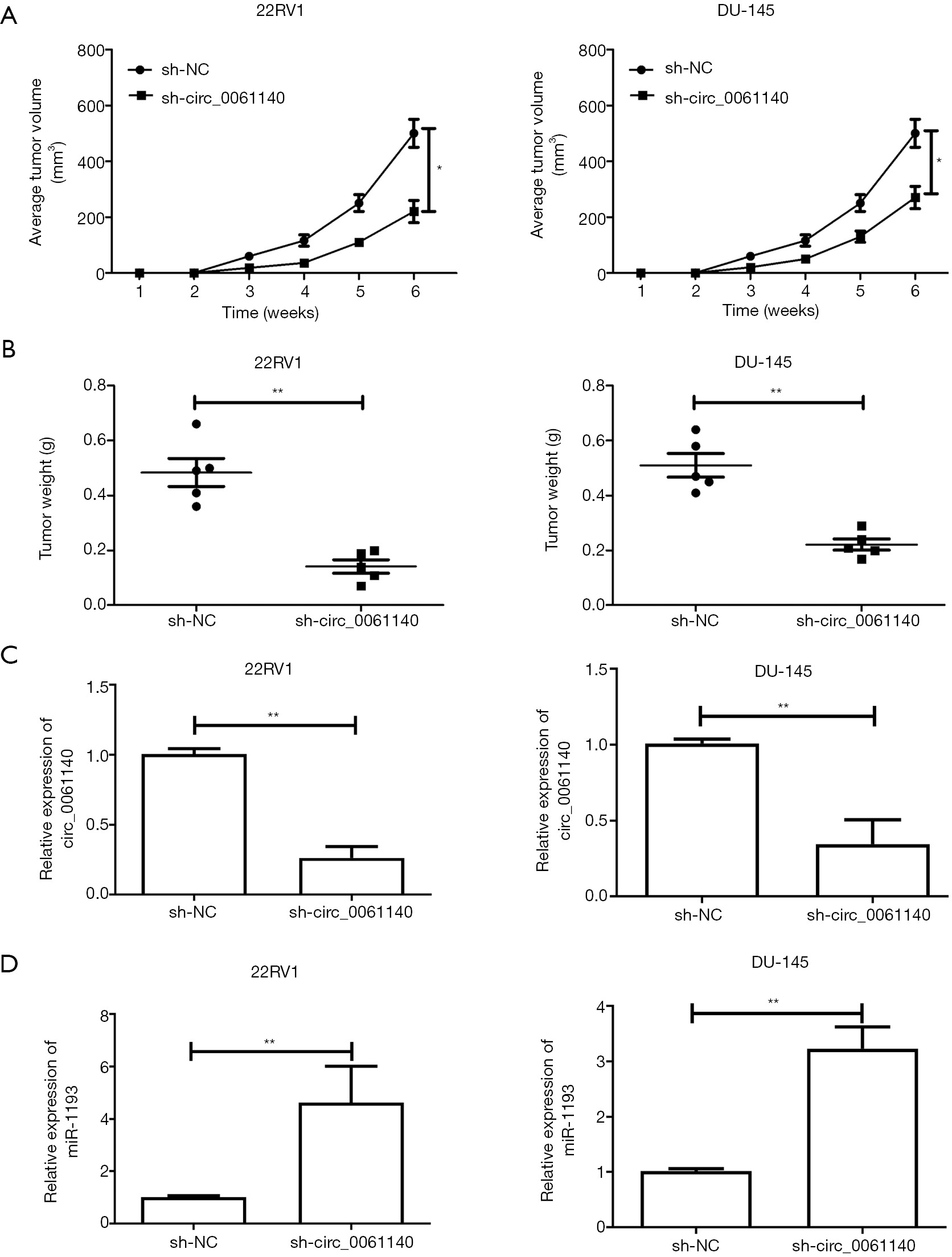 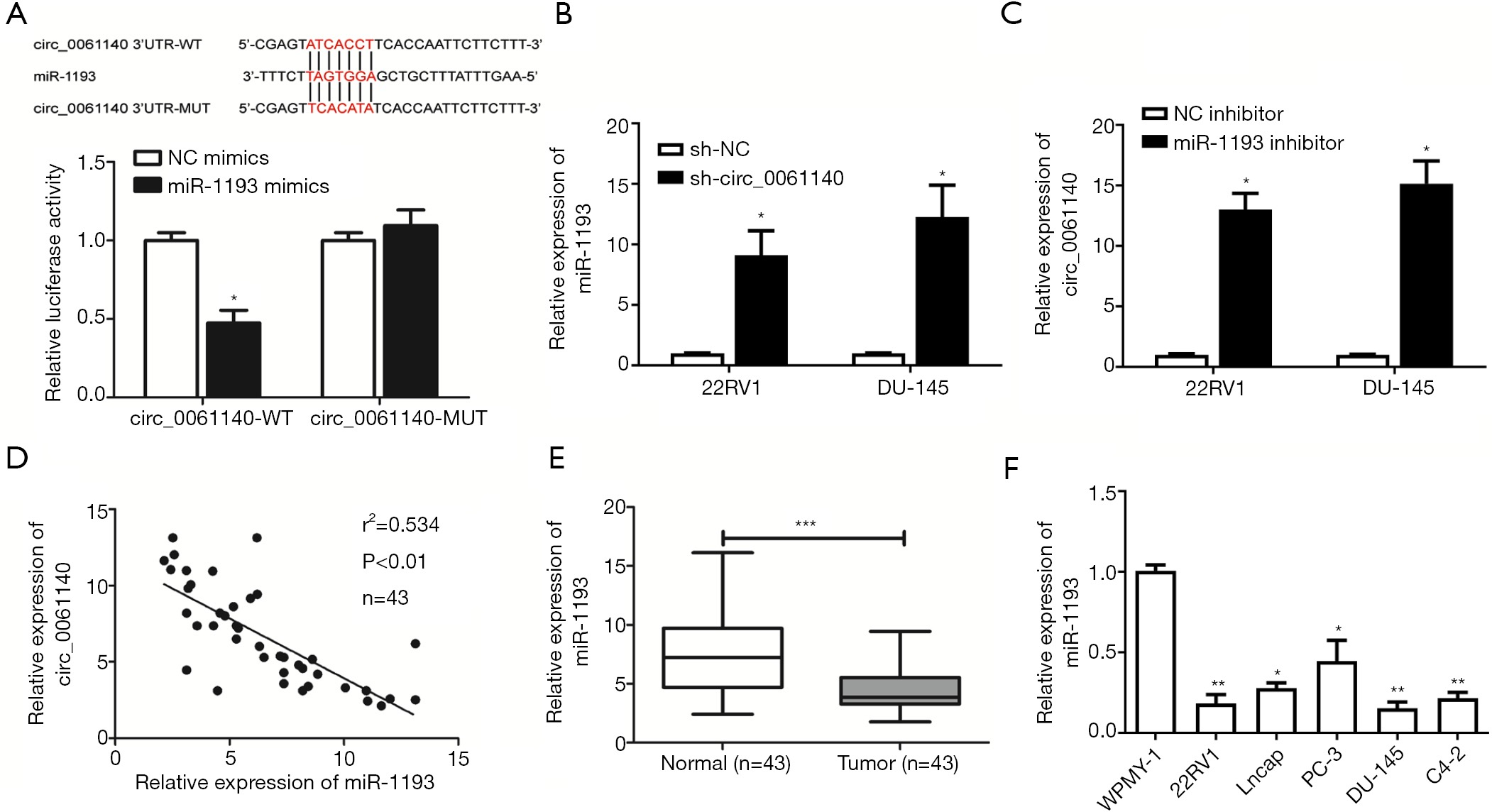 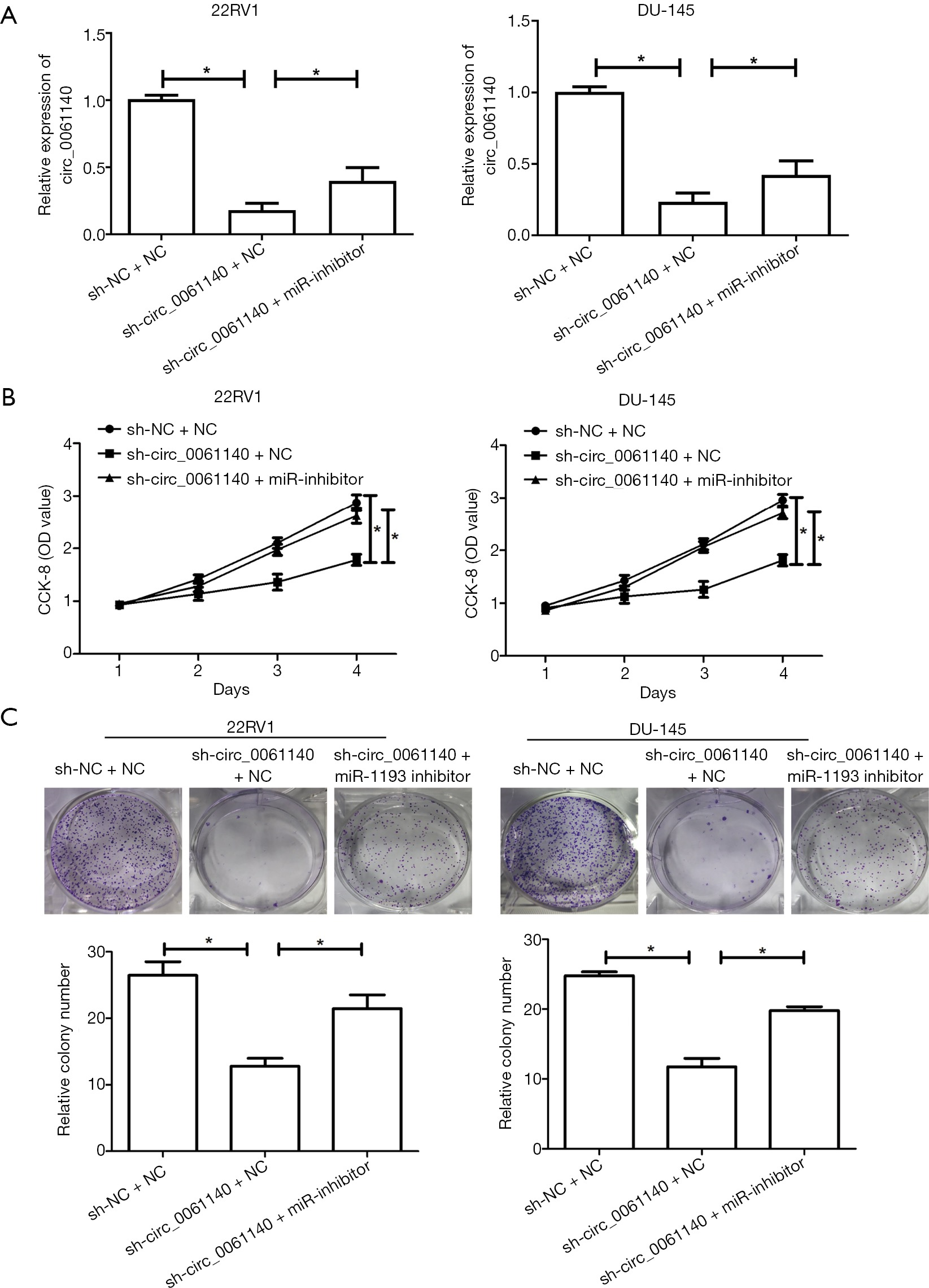 CircRNAs, which are stably expressed in eukaryotes, display tissue specificity and evolutionary conservation (9-11). CircRNAs were first discovered in the viroids of higher plants by Sanger et al. (21) in 1976, and were initially thought to be produced by erroneously variable shear, however, with the rapid development of sequencing and bioinformatics, the vital functions of circRNAs have since been identified (12,13,16,17).

Previous studies (20,22) have shown circ_0061140 to be involved in tumor progression. The present study showed that circ_0061140 is upregulated in PCa tissues, and that it might be an oncogene in the development of PCa. During PCa development, the surrounding micro-environment stimulates tumor cells, producing changes in cell polarity, which eventually enhances the potential of tumor cells. In the present study, the knockdown of circ_0061140 decreased the viability and colony number of PCa cells, which suggests that it inhibited their proliferative potential. Further, the in vivo results showed that knockdown of circ_0061140 markedly reduced the tumor weight and size of nude mice with PCa. Notably, circ_0061140 slowed down the development of PCa by inducing malignant progression.

Some studies have shown that circRNAs can regulate the selective splicing of miRNAs and regulate the expression of target genes by acting as miRNA sponges (13). Compared to linear RNAs, circRNAs are large in number, characterized by structural stability and tissue specificity, and contain more miRNA binding sites, thus, circRNAs make ideal sponges for miRNA molecules (23). In endometrial cancer, circ_0061140 acts as a molecular sponge for miR-149-5p and promotes STAT3 expression, which in promotes disease progression (24). Circ_0061140 is upregulated in ovarian cancer, and promotes the growth and metastasis of ovarian cancer cells by competitively binding to miR-370 (20). It is also significantly expressed in bladder cancer tissue, and can specifically bind to microRNA-1234 to enhance the proliferation and invasion abilities of bladder cancer cells (25).

However, the regulatory mechanism of circ_0061140 in the proliferation of PCa is still unclear. The present study may provide a basis for novel targeted therapies for PCa based on the circRNA-miRNA interaction. Through bioinformatics prediction and luciferase assay verification, we confirmed the binding relationship between circ_0061140 and miR-1193.

The abnormal expression of miR-1193, a recently discovered miRNA, has been reported in many types of solid malignancies, and it has been considered as a tumor suppressor (26-28). The findings of the present study showed that miR-1193 was expressed at a low level in PCa, and its expression was negatively regulated by circ_0061140. Notably, miR-1193 was confirmed to be involved in the development of PCa, and to be regulated by circ_0061140. Thus, intervention with circ_0061140 and miR-1193could play a potential role in the diagnosis and treatment of PCa.

Circ_0061140 is upregulated in PCa tissues and is closely linked to the Gleason score and tumor size of patients with PCa. Additionally, it stimulates PCa cell proliferation by negatively regulating miR-1193.

Funding: This study was funded by the Health Science and Technology Planning Project of Hangzhou (No. 20190682).

Reporting Checklist: The authors have completed the ARRIVE reporting checklist. Available at http://dx.doi.org/10.21037/tau-20-1477

Conflicts of Interest: All authors have completed the ICMJE uniform disclosure form (available at http://dx.doi.org/10.21037/tau-20-1477). The authors have no conflicts of interest to declare.

Ethical Statement: The authors are accountable for all aspects of the work in ensuring that questions related to the accuracy or integrity of any part of the work are appropriately investigated and resolved. The study was conducted in accordance with the Declaration of Helsinki (as revised in 2013). The experiments involving human were approved by the Medical Ethics Committee of the Sir Run Run Shaw Hospital, Zhejiang University Medical College (No.: 20200803-37) and informed consent was obtained from each participant. The experiments involving animal were approved by the Key Laboratory for Analytical Science of Food Safety and Biology, Ministry of Education, Fuzhou University, and were conducted in accordance with the “Guide to the Care and Use of Experimental Animals” (2016), and national or institutional guidelines on the care and use of animals.