Penile cancer (PC) represents a public health problem, due to its high incidence, especially in countries such as Asia, Africa, and South America. Brazil has one of the highest incidence of PC in the world, with 2.9–6.8 per 100,000 inhabitants (1). The etiology of PC remains inconclusive in several aspects, but some risk factors have been associated with this malignant neoplasm. Among them, we highlight the lack of personal hygiene and infection by human papillomavirus (HPV), phimosis with chronic inflammation, smoking (2-4), and some epigenetic alterations, including histone methylation modification (5).

The main prognostic factors in PC are histological grade advanced, stage of the tumor (pT3, pT4), vascular and perineural invasion, and lymph node metastasis, reported in 20% to 65% of cases (6). The association of molecular markers with lymph node metastasis (7), recurrence, and perineural invasion (8,9) has been described in the PC. However, none of these markers that predict worse prognosis are used in clinical practice.

MicroRNAs are regulatory, noncoding RNAs about 8–25 nt. These biomolecules are widely studied due to their potential in mRNA silencing, in addition to having several biological functions (10). The expression profile of the microRNAs is dependent on the initiation and progression of human diseases, especially for various kinds of cancer, suggesting that miRNAs potentially represent prognostic markers (11).

MiR-145 is still involved in the regulation of important cell processes, such as p53-mediated cell-cycle arrest (10). Its deregulation was found in osteosarcoma (12), ovarian cancer (13), breast cancer (14), colorectal cancer (15). Reduced expression of miR-145 in colorectal cancer tissues is associated with lymph node metastasis and advanced clinical stage (15). Downregulation of miR-145 has been associated with higher HPV load and, consequently, overexpression of the E6 oncoprotein (16). MiR-145 is still involved in regulating critical cell processes, such as p53-mediated cell cycle arrest (17).

In PC miR-145 has already been addressed in two studies, but no significant relationship was found with factors with a worse prognosis and HPV. Here, we analyzed miR-145 in PC in penile tumors infected by HPV and to correlate it with the clinicopathological characteristics of the tumor and the protein expression of p53, mirR-145 may be potential biomarker to PC. To our knowledge, this is the first work that addresses the expression or miR-145 has reduced expression associated with cases of histological associated HPV, absence of p53 expression in positive HPV cases and perineural invasion.

We present the following article in accordance with the MDAR reporting checklist (available at http://dx.doi.org/10.21037/tau-20-1378).

Formalin-fixed paraffin-embedded samples from 52 patients with PC were obtained from the Aldenora Bello Cancer Hospital and the University Hospital of the Federal University of Maranhão in São Luís, Maranhão, Brazil, where the human development index is a low 0.768 (IBGE, 2010), and the incidence of PC is the highest recorded in the world (1). Tumor samples were obtained at the time of surgery, without neoadjuvant treatment, from January 2013 to June 2016.

The Scientific Commission approved the study-COMIC-HUUFMA with the opinion no. 2457/2014-60 and by the Research Ethics Committee of the University Hospital/CEP-HUUFMA with approval number: 1.093.435. To meet the regulations for research with human subjects, established by Resolution no. 466/12 of the National Health Council, all duly guided participants, provided a signed Free and Informed Consent Form. The study was conducted in accordance with the Declaration of Helsinki (as revised in 2013). All individuals or their legal guardians were educated about the study and signed an informed consent form.

This series is part of a previous study (7). For the classification of tumors the 8th edition American Joint Committee on Cancer, was used (18). The majority of tumors had histological subtype warty or basaloid (38.5%), histological grade 2 (63.5%) and primary tumor pT2 and pT3 (73.1%) prevailed (Table 1).

FFPE samples were used, a pathologist selected two H&E stained slides containing paired samples from each case. One slide presented neoplastic tissue, and the other presented adjacent tissue, 2 cm distant from the primary tumor and comprising at least 70% of malignant cells. The adjacent tissue did not contain neoplastic tissue, fibrosis, adipose tissue, or any other contaminant. RNA and DNA were extracted from histological slides containing 10 micrometers of each tissue.

The identification of the subtypes HPV of the samples HPV-positive, was performed the sequencing reaction with the DYEnamic ET Terminator Cycle Sequencing Kit, according to the protocol suggested by the manufacturer (GE Healthcare, Little Chalfont, UK).

The χ2 test was used to determine the association among clinicopathological, protein expression, and HPV identification. Student’s t-test was used to compare microRNA expression levels with clinical-pathological parameters and protein expression. Survival analysis was performed using the Kaplan-Meier method to determine disease-free survival and overall survival compared with the level of microRNA expression and clinicopathological characteristics. The log-rank test was used to compare survival curves. All statistical analyses were performed using SPSS software (version 23.0, Chicago, IL, USA). For all analyses, P values ≤0.05 were considered statistically significant.

All the 52 patients were diagnosed with squamous cell penile carcinoma, and the average time between the emergence of symptoms until the search for treatment was 21.8 months, with mean follow-up was 17.3 months. They presented an average age of 61.8 years, consisting mainly of farmers (45%); most were married (73.8%), with little or no educational background (73.8%). Most of these patients underwent partial penectomy (73.1%), with lesions located on the gland (96.1%). 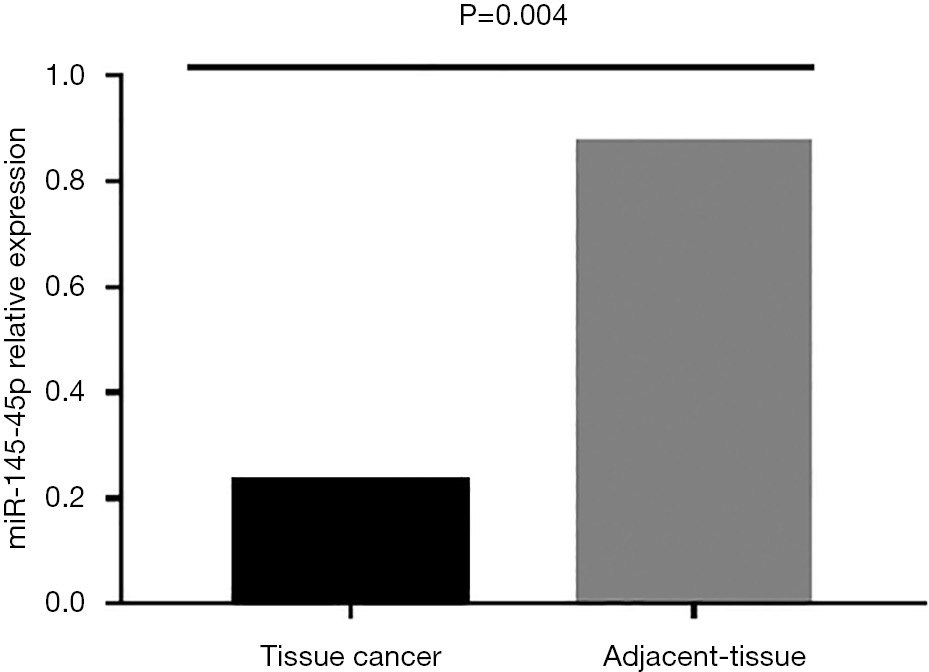 Figure 1 Expression difference of miR-145 between primary tumors and the region adjacent to the tumor.

The association of clinical-pathological features with miR-145 expression is summarized in Table 2. It was also observed that miR-145 expression was significantly reduced in patients with perineural invasion (P=0.033) and HPV-associated histological subtypes (P=0.024), pT3, and lymph node metastasis cases showed lower expression levels, although no statistical difference. 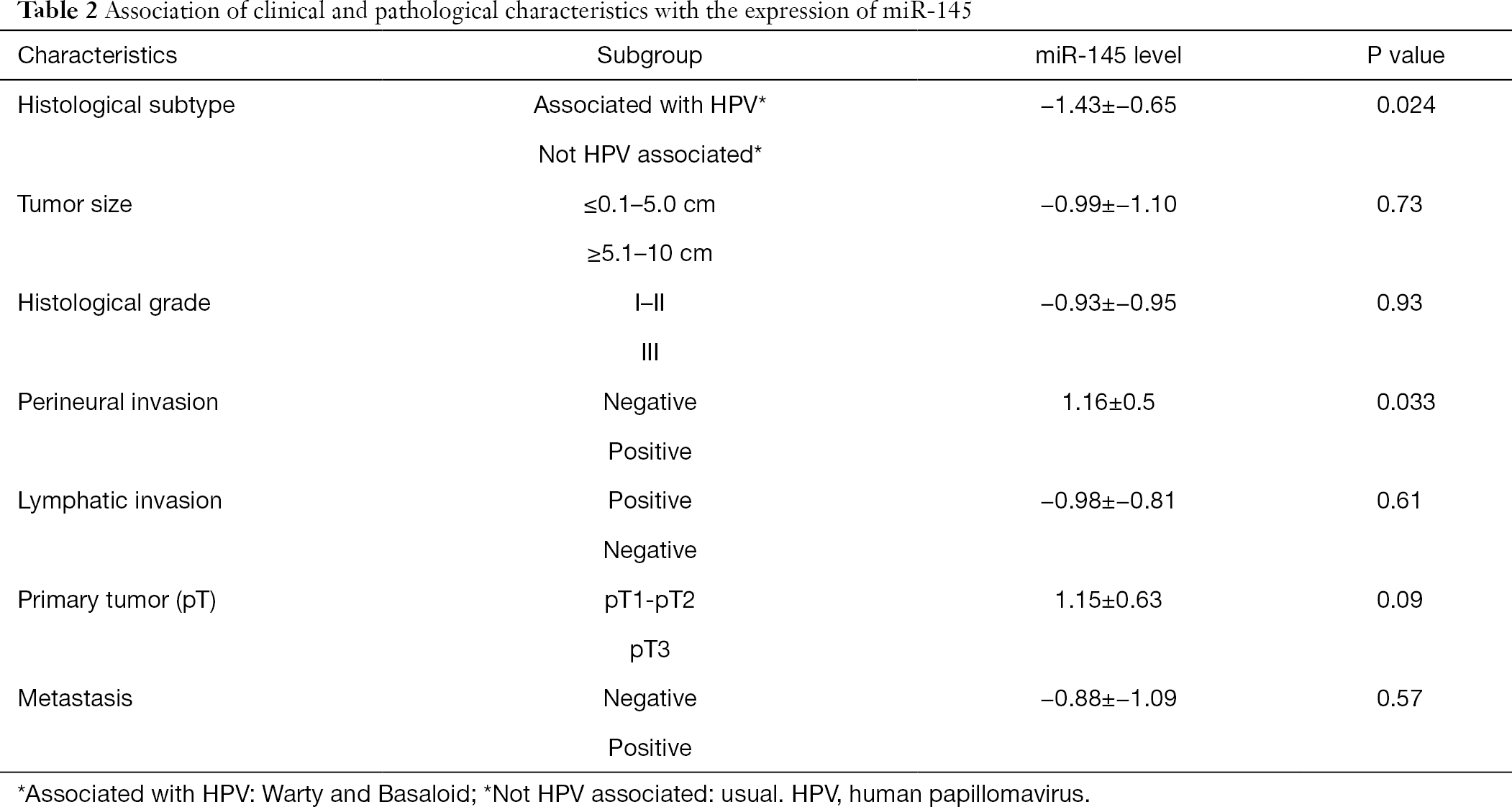 Five patients died from cancer during the treatment period, 43 stayed disease-free, and four abandoned treatment. Among the 52 patients, relapses episodes were observed in seven patients. Besides the surgical treatment, two patients were subjected to chemotherapy and seven to radiotherapy.

Considering all the groups of tumors in the sample, it was observed that the expression of miR-145 was significantly lower in p53- tumors (P=0.045; Table 3). The same was found in the p53-HPV+ tumor sample group (−1.268±−0.30; P=0.0044). There was no statistical difference between the expression of p53 and Ki67 with the clinicopathological characteristics and the presence of HPV (Table S1). 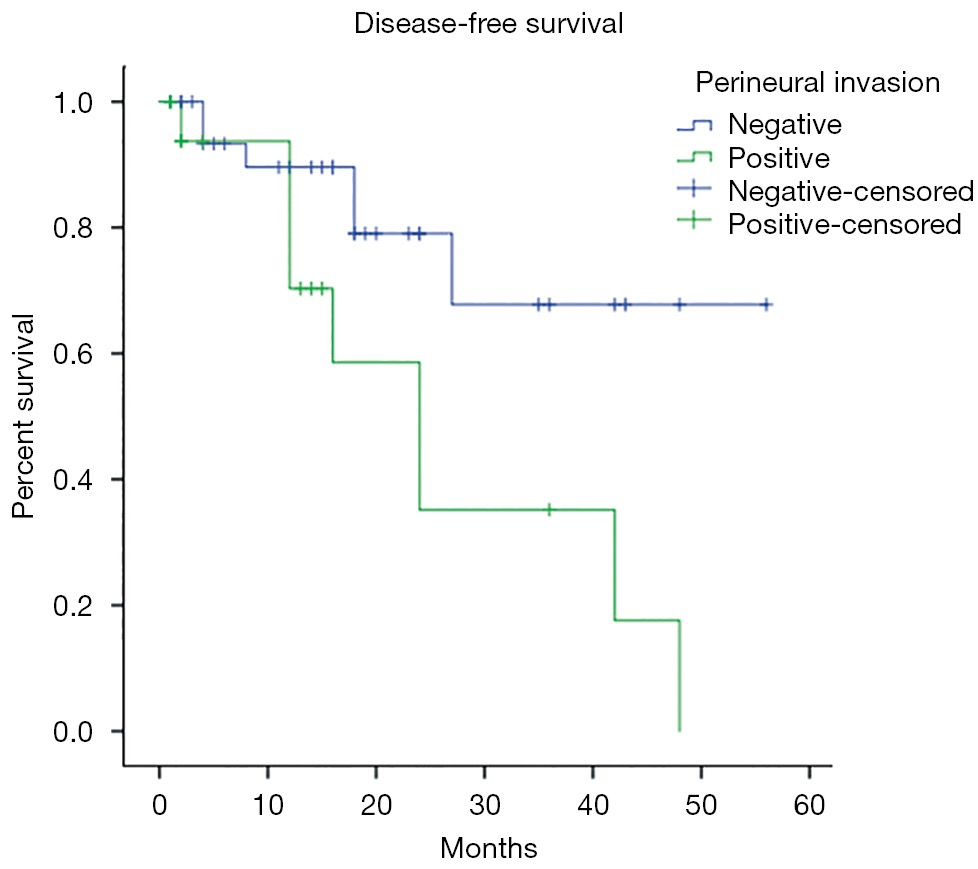 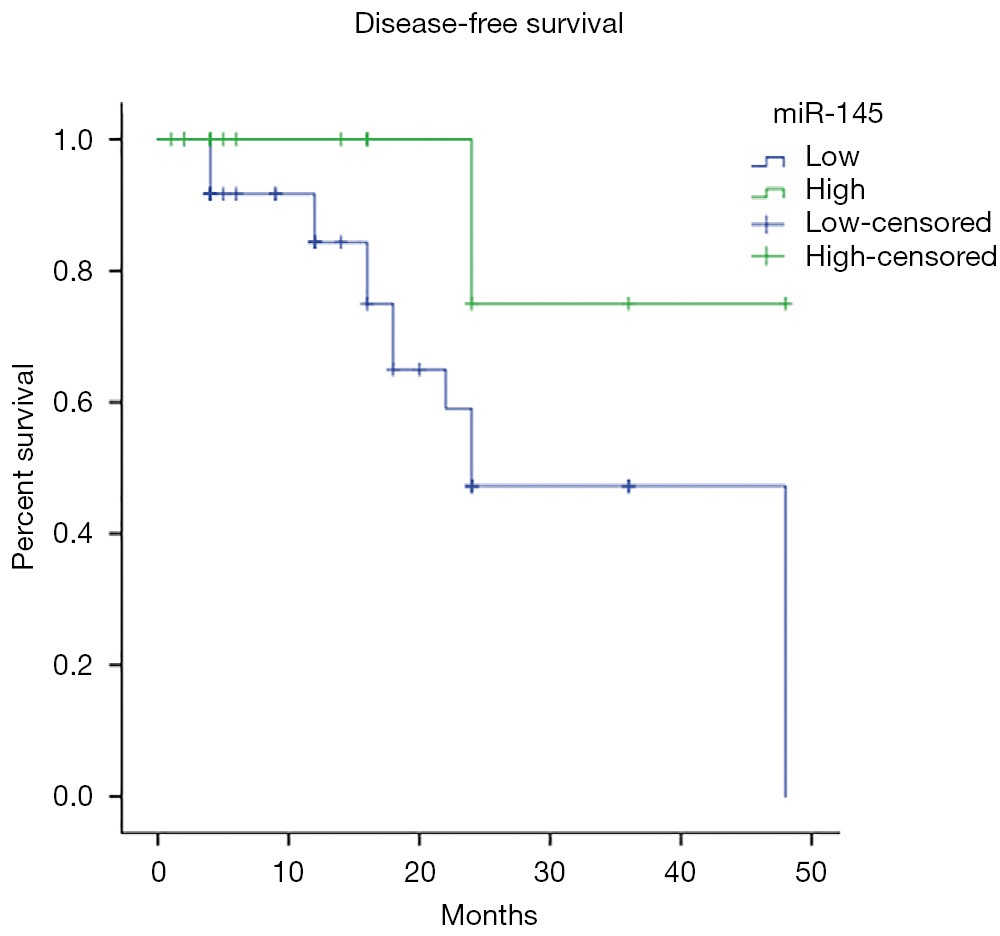 Mir-145 is a tumor suppressor (Tsmir) that is differentially expressed in some cancers, capable of regulating multiple oncogenes’ expression in several biological pathways (23). Previously, Barzon et al. (24) studied this microRNA and its correlation with some histological characteristics and HPV in PC but did not find any relevant results. These results were probably because comparisons were not made between neoplastic and non-neoplastic samples, and there was a much lower prevalence of positive HPV cases. Kuasne et al. (25) have detected, by microarray, changes in miRNA-145 expression in PC samples. The two studies described above were the only ones to provide clues about the potential role of miRNA-145 in penile carcinogenesis.

The data presented in this work demonstrate that miR-145 is a potential biomarker of perineural invasion (PNI). In previous studies, PNI has been recognized as a prognostic indicator of poor survival in patients with PC (27). The downregulation of miR-145 is associated with poor PFS (progression-free survival) in patients with lung cancer, colorectal cancer, esophageal cancer, breast cancer, and glioma (28). This can be explained by the fact that miR-145 targets multiple oncogenes that act in metastatic and epithelial-mesenchymal transition processes, such as Vimentin, Cadherin, Fibronectin, SMAD3, MMP11, Snail1, ZEB1/2, HIF-1α and Rock-1 (29). Interestingly, miR-145 has been observed in extracellular vesicles isolated from body fluids (30). In addition, it acts in several tumorigenic functions, including the regulation of cell proliferation, differentiation, apoptosis, invasion and metastasis (23). This distinct role of miR-145 can introduce this biomolecule as a potential candidate for the control of cancer metastasis by miRNA replacement therapy (30).

Therefore our data demonstrate that this microRNA could promote cancer cells to invade the nerve bundle and spread out. PNI represents a possible way of spreading tumor cells, being able to promote metastasis, representing, therefore, a histological characteristic of worse prognosis (31). Our study has also shown that cases with downregulation of miR-145 have shorter disease-free survival and a worse prognosis, such as perineural invasion. This implies that the study expression of miR-145 can be a useful tool in the prognostic evaluation of this subset of patients

Concerning the downregulation of miR-145 in cases of histological associated HPV and absence of p53 expression in positive HPV cases. In neoplasms associated with HPV infection, such as head/neck and cervical neoplasms, the negative regulation of miR-145 was related to viral virus infection and loss of p53 (32,33). This is probably because the wild-type p53 gene is a tumor suppressor that regulates the transcription of miR-145 positively. However, with the activation of HPV E6 (HPV-E6) oncoprotein, suppression of p53 expression occurs because the HPV E6 oncoprotein can degrade the p53 protein via ubiquitination, resulting in reduction (33). This may be a possible explanation for the low expression of miR-145 in PC observed in the present study.

MiR-145 acts regulating a series of oncogenes such as EGFR, C-MYC, KLF4, E2F3 e CDK6 (23). Among these, EGFR and C-MYC have been widely studied for PC. Studies have demonstrated that EGFR is often overexpressed its protein and gene dysregulation, has already been associated with advanced stage, lower overall survival and metastatic lymph node status (34). Downregulation of miR-145 may be one of the mechanisms for high expression of EGFR, especially in HPV positive tumors (35). Additionally, this microRNA can regulate pathways such as Wnt, TGF-beta, Calcium which are involved in cell growth, progression, survival, angiogenesis, and apoptosis (23).

One limitation in our study is the use of an adjacent sample as a control, but it is necessary to consider the difficulty in obtaining normal samples for the study of patients with PC. Furthermore, this methodology has been accepted in studies with this type of tumor as reported in the work of Macedo et al. (35) and Pinho et al. (7).

In summary, our results showed that miR-145 is less expressed in PC samples compared to the region adjacent to the tumor. Also, the reduction of this microRNA may be triggered by HPV, which decreases p53 protein expression. Our data also hint that miR-145 expression may be an indicator of PNI- positive. To our knowledge, this is the first study to address the relationship of miR-145 with HPV and p53 in PC and perineural invasion. Deregulation of miR-145 appears to be a factor for promoting tumorigenesis, being, therefore, a potential biomarker.

Funding: The study was supported by the Fundação de Amparo à Pesquisa e Desenvolvimento Científico do Maranhão (FAPEMA) under grant number 00696/14 and coordination the author GEBS and Nucleus of Oncology Research (NPO/ HUJBB).

Reporting Checklist: The authors have completed the MDAR reporting checklist. Available at http://dx.doi.org/10.21037/tau-20-1378

Conflicts of Interest: All authors have completed the ICMJE uniform disclosure form (available at http://dx.doi.org/10.21037/tau-20-1378). The authors have no conflicts of interest to declare.

Ethical Statement: The authors are accountable for all aspects of the work in ensuring that questions related to the accuracy or integrity of any part of the work are appropriately investigated and resolved. The study was conducted in accordance with the Declaration of Helsinki (as revised in 2013). The study was approved by the Scientific Commission-COMIC-HUUFMA with the opinion no. 2457/2014-60 and by the Research Ethics Committee of the University Hospital/CEP-HUUFMA with approval number: 1.093.435. All individuals or their legal guardians were educated about the study and signed an informed consent form.