Long non-coding RNA (lncRNA) is a new hot spot in the field of oncology research in recent years, and it is a type of ncRNA that does not have protein coding functions (7,8). A large number of studies have shown that the abnormal expression of lncRNA in a variety of tumors is closely related to the occurrence and development of tumors (9-11). LncRNA can participate in the regulatory process of tumor cell growth, proliferation, invasion, and metastasis through the effects of oncogenes or tumor suppressor genes. In recent years, a large number of lncRNAs related to BC have been reported (12). For example, UBC1 is highly expressed in BC tissues and is closely related to patients' lymphatic metastasis and poor prognosis (13,14). LncRNA BLACAT2 is significantly upregulated in BC and promotes related lymphangiogenesis and lymphatic metastasis (11). These suggested that lncRNA can be used as a therapeutic target for BC. Differentiation antagonistic non-protein coding RNA (DANCR) is highly expressed in ovarian cancer and promotes tumor growth and angiogenesis (12). More and more studies have shown that DANCR plays an important role in cancer progression. DANCR can also promote the metastasis and invasion of cervical cancer, pancreatic cancer, gastric cancer, and other cancer cells, which is related to poor prognosis of cancer (13-15). Zhan et al. found that DANCR promotes malignant phenotypes of bladder cancer cells by modulating the miR-149/MSI2 axis as a ceRNA (16). It suggests that DANCR may play an important role in bladder cancer. However, the mechanism of DANCR in lymphatic metastasis of BC needs further study.

The ceRNA hypothesis indicates that there is a regulatory network between lncRNA and microRNA (miRNA). miRNAs are a group of small non-coding molecules with a length of about 18–25 nucleotides. Studies have found that miRNAs are involved in different stages of tumorigenesis and metastasis (17,18). miR-335 is one of the miRNAs closely related to cancer progression, and may play a role in tumor suppression. Its expression is reduced in most human cancer cells (19-21). For example, miR-335 is significantly downregulated in gastric cancer and is considered to be a tumor suppressor for gastric cancer (22). However, the role of miR-335 in lymphatic metastasis of BC needs to be further explored.

Vascular endothelial growth factor (VEGF) is a specific heparin-binding growth factor for vascular endothelial cells that can induce the formation of new blood vessels (23). VEGF-C is a lymphangiogenic factor belonging to the VEGF family. Tumor cells can promote the formation of lymphatic vessels by expressing VEGF-C, leading to lymphatic metastasis of tumor cells (24-26). Studies have shown that VEGF-C is highly expressed in BC cells, while the expression level is low (or non-existent) in normal epithelial cells (27,28). Detecting the expression level of VEGF-C in tissue can help predict the risk of pelvic lymphatic metastasis. Therefore, we propose that the DANCR/miR-335/VEGF-C axis plays a key role in lymphatic metastasis of BC.

We present the following article in accordance with the MDAR reporting checklist (available at http://dx.doi.org/10.21037/tau-21-226).

The total protein was extracted with RIPA lysis and extraction buffer (Thermo Fisher, Waltham, MA, USA), and the protein concentration was detected by bicinchoninic acid kit (Abcam, Cambridge, MA, USA). 10%sodium dodecylsulfate–polyacrylamide gel electrophoresis (SDS-PAGE) was selected to separate the protein according to the molecular weight of the target protein. After electrophoresis, the protein was transferred to a polyvinylidene difluoride membrane. After blocking with 5% skim milk powder at room temperature for 90 min, the primary antibody was added at 4 °C overnight (1:1,000) (Abcam, Cambridge, MA, USA). The following day, the secondary antibody linked to horseradish peroxidase (1:1,000) (Abcam, Cambridge, MA, USA) was incubated at room temperature for 1 h, and finally placed in ECL chemiluminescence solution (Beyotime, Shanghai, China) for imaging.

A Transwell migration chamber (Sigma Aldrich, St.Louis, MO, USA) was used to measure cell migration ability. The upper chamber was incubated with serum-free medium for 24 h, and the lower chamber was incubated with RPMI 1640 medium containing 20% fetal bovine serum for 24 h. The cells were then fixed with 4% PFA for 10 min and stained with 0.1% crystal violet (Beyotime, Shanghai, China) for 30 min.

Cells were placed in a 6-well plate and cultured overnight in normal cell growth medium. A 200-µm sterile pipette was used to traverse the cell layer and incubate in another serum-free medium for 24 h prior to cell imaging.

BC cells were labeled with fluorescent dyes, and the excess dyes were rinsed off and add a small amount of serum-free medium. Endothelial cells were seeded onto a 96-well culture plate, and stained BC cells were added and cultured for 1 h. Wash away the unadhered cells, the adhesion rate of bladder cancer cells and endothelial cells was detected using a confocal laser microscope (Olympus, Tokyo, Japan).

The wild and mutant plasmids of DANCR or VEGF-C 3' untranslated region (UTR) containing miR-335-5p binding sites were constructed and integrated into a dual-luciferase vector, namely DANCR Wt/Mut or VEGF-C Wt/Mut. Subsequently, the plasmids were co-transfected with miR-335-5p mimics into 5,637 cells, and finally luciferase activity was detected with a dual-luciferase kit (Promega, Madison, WI, USA).

DANCR is highly expressed in BC cell lines 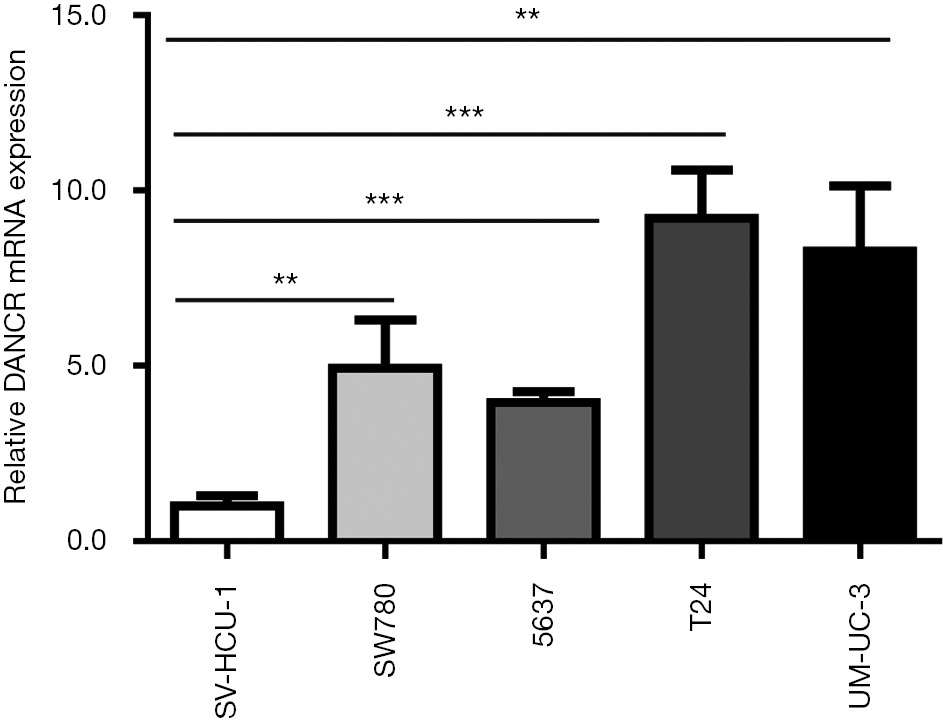 Knockdown of DANCR inhibits lymphatic metastasis in BC

To study the biological function of DANCR in BC lymphatic metastasis, we silenced the expression of DANCR by transfecting DANCR interfering small RNA (siRNA) in the BC T24 cell line. We found that the transfection of DANCR siRNA can effectively inhibit the expression of DANCR, and that si-DANCR-3 had the best interference efficiency (Figure 2A). We chose si-DANC-3 for subsequent experiments to silence the expression of DANCR. We then used RT-qPCR to detect the mRNA levels of miR-335 and VEGF-C, and si-NC was used as a control. After silencing DANCR (si-DANCR), the expression of miR-335 was upregulated and the expression of VEGF-C was downregulated (Figure 2B). It was further verified by Western blot that, compared with the control group, the VEGF-C protein in the si-DANCR group was downregulated (Figure 2C). CCK-8 detection showed that the cell viability of the siDANCR group was significantly inhibited (Figure 2D). The Wound healing and Transwell assays also showed that si-DANCR significantly inhibited the migration and invasion rate of BC cells (Figure 2E,F). In addition, endothelial cell adhesion experiments further confirmed that the endothelial cell adhesion rate in the si-DANCR group was reduced (Figure 2G). Therefore, these results indicate that DANCR has a certain regulatory effect on lymphatic metastasis in BC. 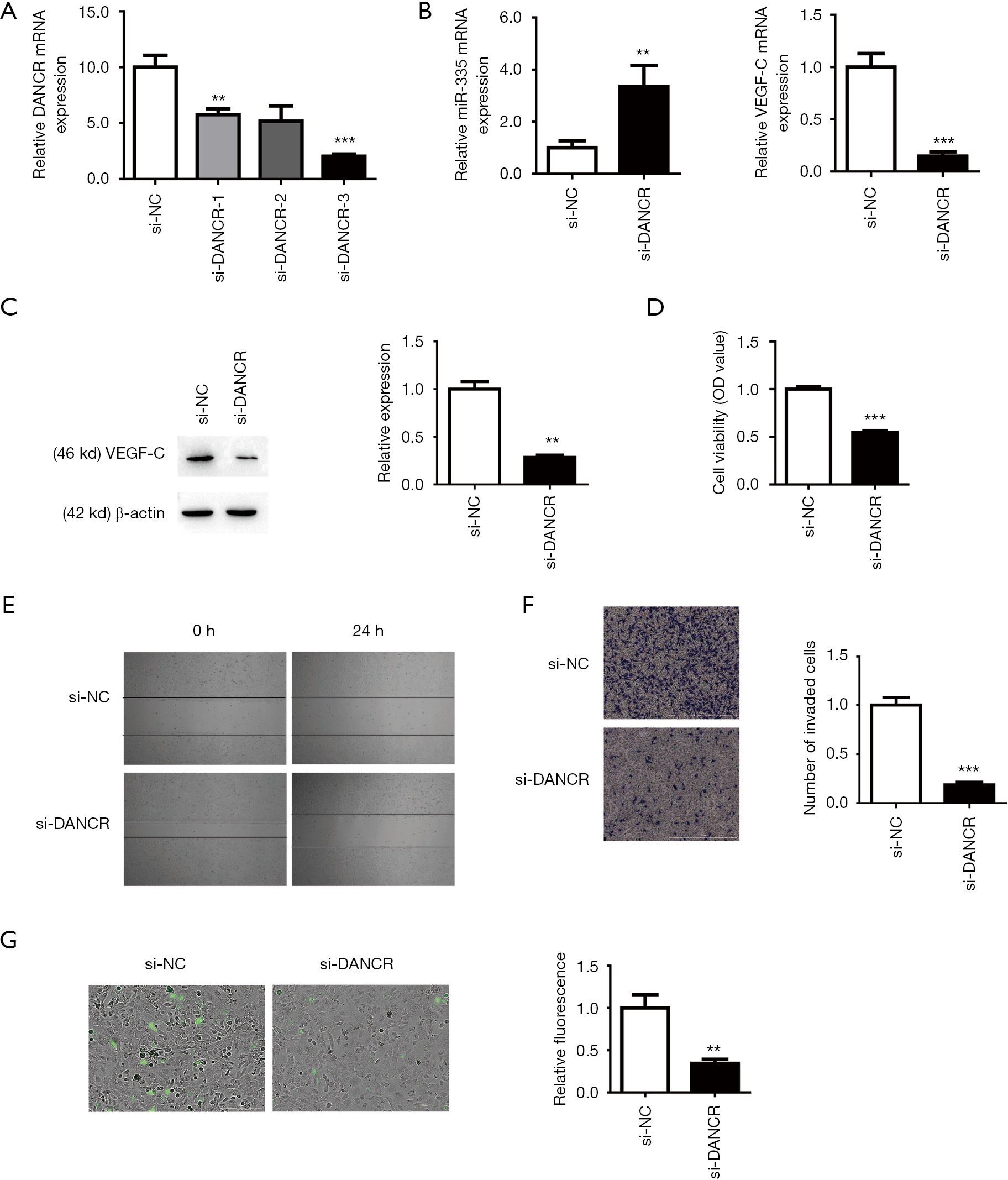 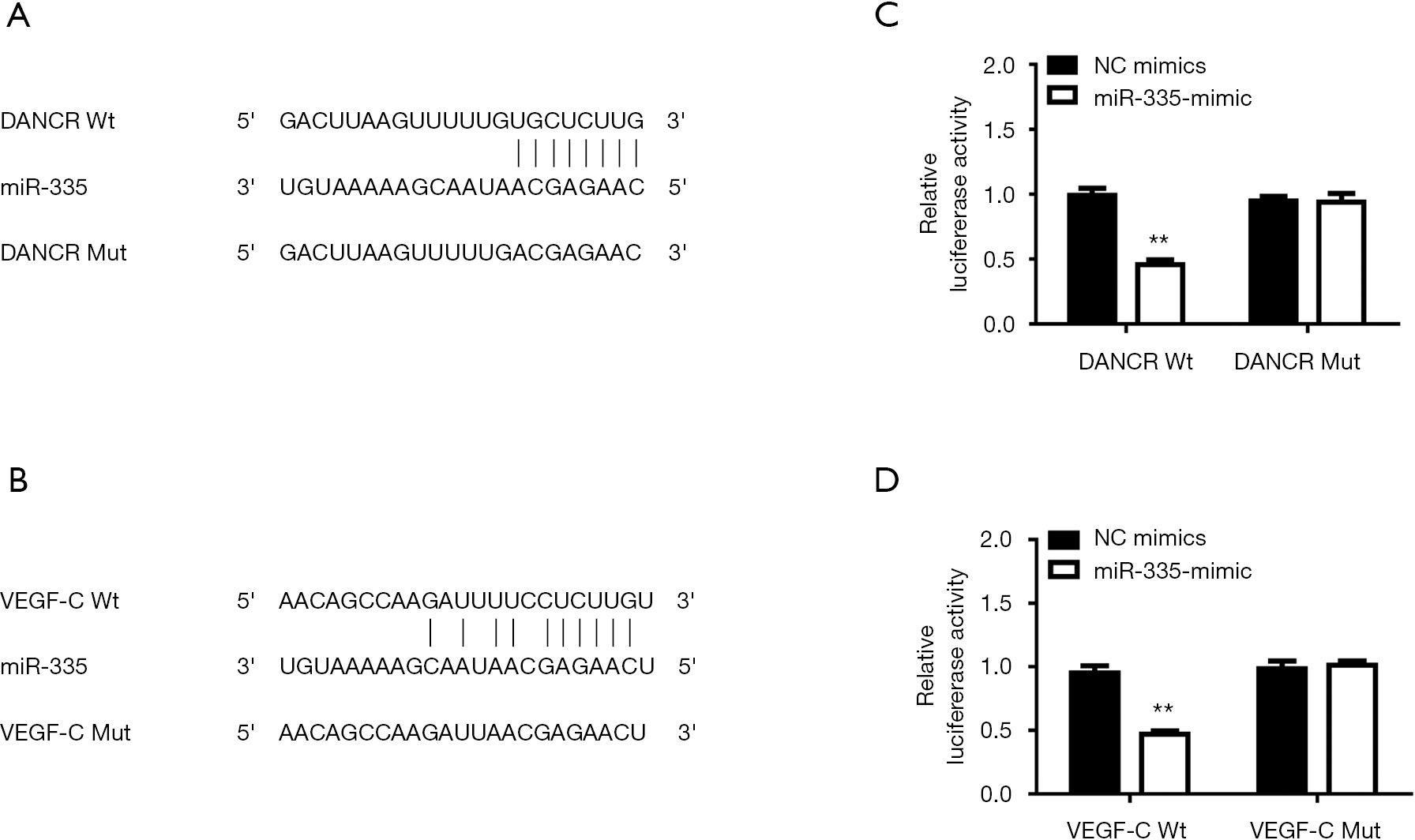 DANCR directly targets miR-335 to regulate lymphatic metastasis of BC 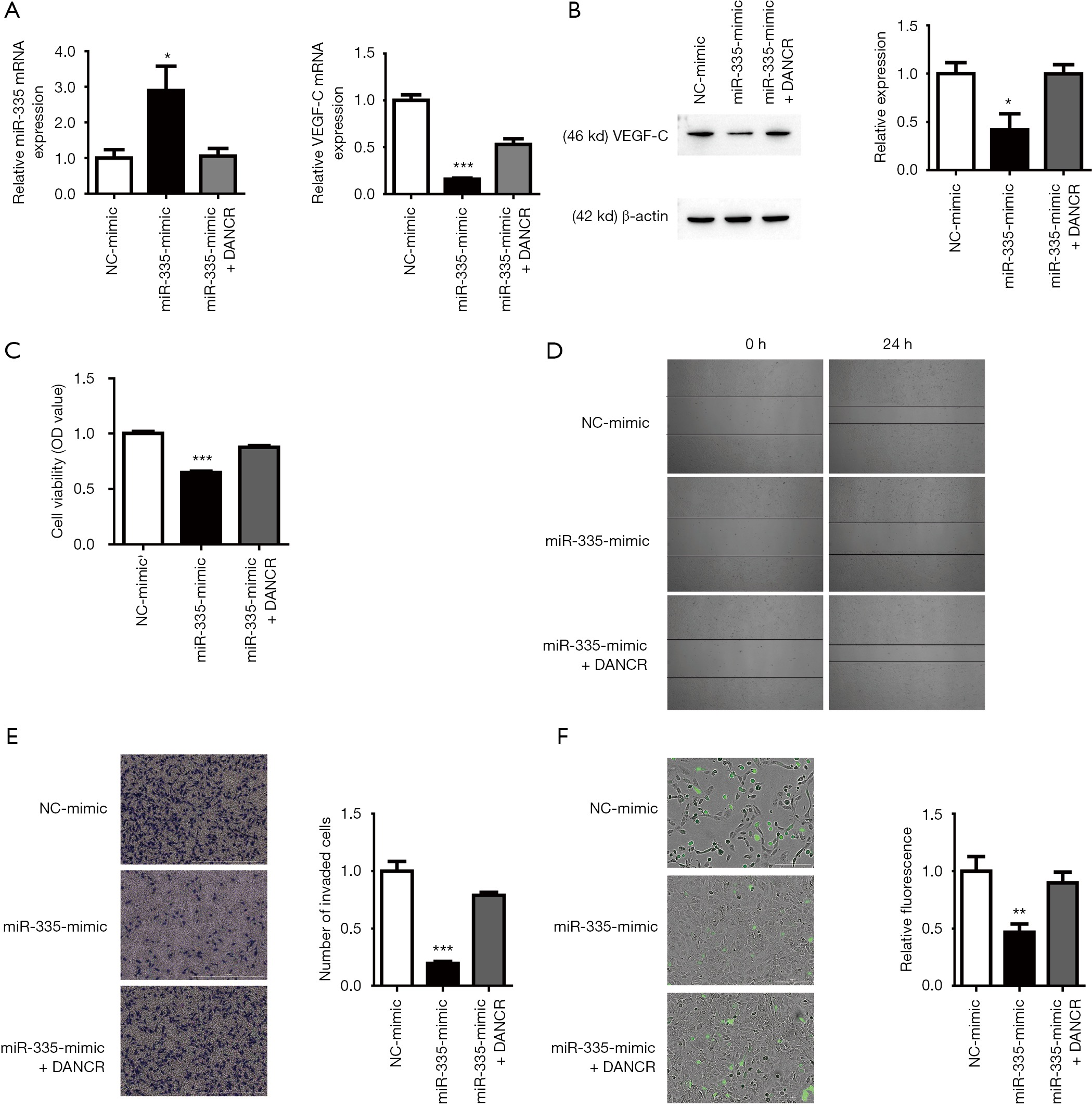 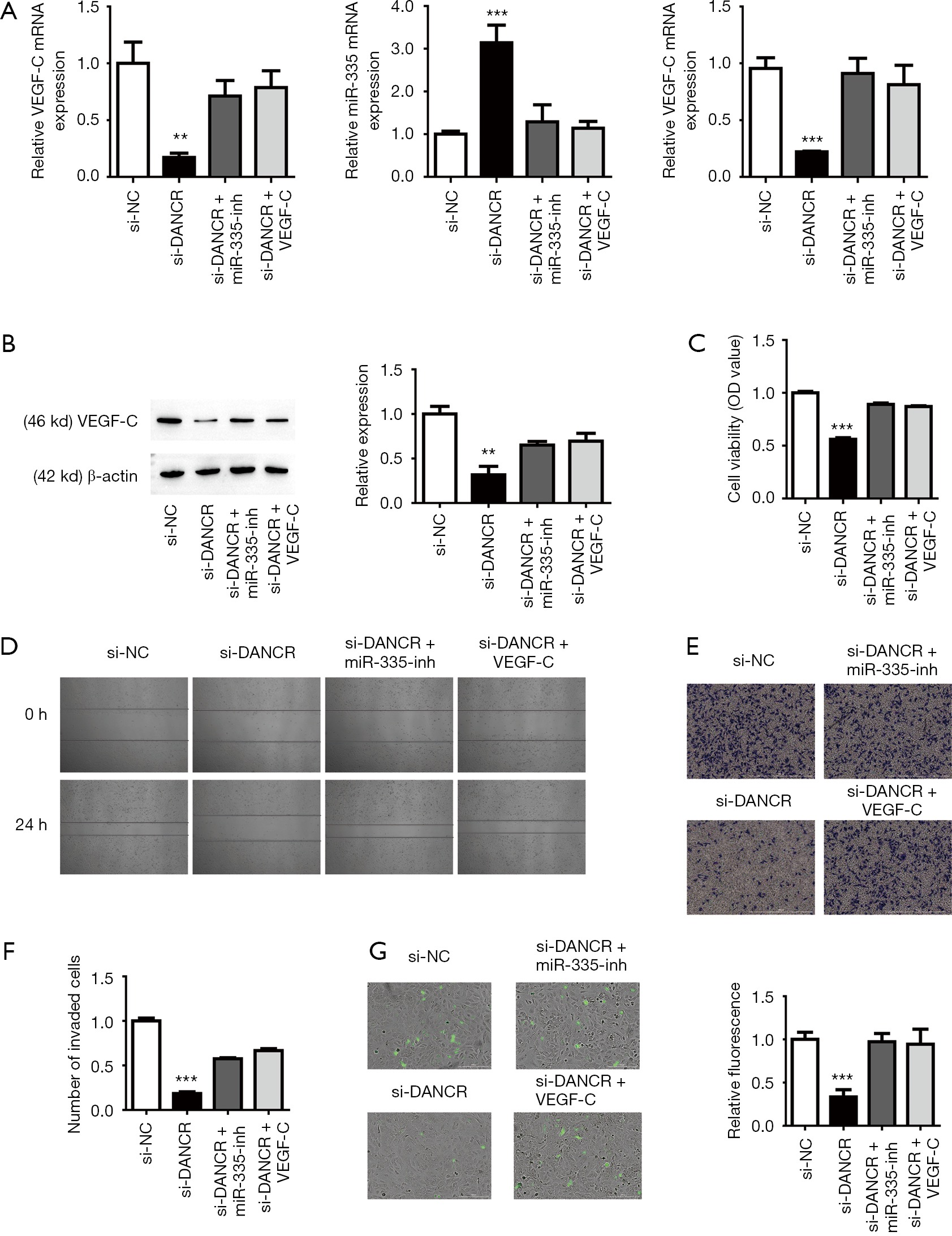 BC is one of the most common malignant tumors in the urinary system. It has the characteristics of painless gross hematuria, dysuria or urinary retention, which seriously threatens human life and health. The current treatments for BC include chemotherapy, surgery, and radiation therapy; however, patients still have recurrence or poor prognosis (29-31), mainly characterized by lymphatic metastasis. The lack of a comprehensive understanding of the occurrence and development of BC lymphatic metastasis is one of the important reasons for the decline in patient survival.

In recent years, it has been found that lncRNAs plays an important role in the regulation of gene expression in BC. For example, UCA1 and LNMAT1 may be used as therapeutic targets for patients with BC, and the abnormal expression of lncRNA is associated with its occurrence (32,33). These indicate that lncRNA can be used as an oncogene or as a tumor suppressor gene. As a newly discovered lncRNA, DANCR is abnormally expressed in a variety of human cancers. For example, Qu et al. reported that DANCR is upregulated in oral squamous cell carcinoma tissues and cells. Si-DANCR can reduce the proliferation, migration, and invasion of OSCC cells through miR-216a (34). Pan et al. also found that DANCR can be activated by SALL4 and promote the proliferation and invasion of gastric cancer cells (35). However, the specific downstream targeting molecule of DANCR in BC remains to be explored. Our research has found that DANCR is highly expressed in BC cell lines. The downregulation of DANCR has an inhibitory effect on the vitality, migration, and invasion of BC cells. In addition, Western blot and endothelial cell adhesion assay confirmed that DANCR affects lymphatic metastasis. These results indicate that DANCR plays an important role in the development of BC lymphatic metastasis.

Studies have shown that miRNAs may play an indispensable role in cancer cell proliferation, differentiation, invasion, and migration, and many miRNA expression disorders are related to lymphatic metastasis of various cancers (36-38). For example, Guo et al. found that miR-34a has a tumor suppressor effect in mouse liver cancer, not only inhibiting cell growth but also inhibiting metastasis, and can be used as a new therapeutic target for liver cancer (39). In addition, there is a regulatory relationship between lncRNA and miRNA; lncRNA can affect the downstream target genes of miRNA by regulating miRNA, thereby affecting the occurrence and development of various cancers (40,41). In the present study, we used dual-luciferase report experiments to verify the targeting relationship between miR-335 and DANCR, adding miR-335 mimic to inhibit the migration, invasion, and metastasis of BC cells; the overexpression of DANCR reversed this inhibition. Therefore, miR-335 may be a target of DANCR in BC, and DANCR promotes lymphatic metastasis of BC by inhibiting miR-335.

VEGF-C was the first lymphangiogenic factor discovered that affects tumor blood vessel formation and cancer progression. We found that the expression of VEGF-C was upregulated in BC cells. Luciferase experiments further verified the targeting relationship between miR-335 and VEGF-C. The si-DANCR group not only inhibited the vitality, migration, and invasion of BC cells but also inhibited metastasis, which was counteracted by inhibiting miR-335 or overexpressing VEGF-C. Therefore, we believe that the downregulation of DANCR inhibits the expression of VEGF-C through the upregulation of miR-335, and the molecular axis of DANCR/miR-335/VEGF-C can be used as a target to explore lymphatic metastasis of BC.

Reporting Checklist: The authors have completed the MDAR reporting checklist. Available at http://dx.doi.org/10.21037/tau-21-226

Conflicts of Interest: All authors have completed the ICMJE uniform disclosure form (available at http://dx.doi.org/10.21037/tau-21-226). The authors have no conflicts of interest to declare.