Penile squamous cell carcinoma is an uncommon neoplasia in developed countries, but has a high incidence in South America, Southeast Asia and Africa. In Brazil its incidence is 6.1/100 thousand inhabitants (1). This type of tumor is strongly associated with socioeconomic factors, genital hygiene, HPV infection and important developmental factors (2).

Penile lesions usually present as a vegetative lesion, and sometimes ulcerated. Histologically, penile squamous cell carcinoma is classified according to its histomorphological characteristics and its relation or not to HPV. Non-HPV-related variants include the usual variant, pseudohyperplastic, pseudoglandular, verrucous, papillary, adenosquamous, sarcomatoid, and mixed. HPV-related variants are basaloid, Warty, Warty-basaloid, clear cells tumor, and lymphoepithelioma-like. Histological grading is an important prognostic and predictive factor for metastasis to inguinal lymph nodes (2). The poorly differentiated pseudoangiosarcomatous variant of squamous cells carcinoma (SCC) exhibits proliferation of polygonal or flattened atypical keratinocytes that form interanastomosing channels that mimic vascular proliferation these pseudovessels have prominent neoplastic cells and red blood cells inside (3-6). These atypical cells are positive for cytokeratins and negative for vascular markers such as CD31 and CD34 (3,7,8). It is also positive for p16 in the presence of HPV (2). This report presents the first case of penile pseudoangiosarcomatous squamous cell carcinoma, describing its clinical, histological and immunohistochemical characteristics, as well as HPV status. 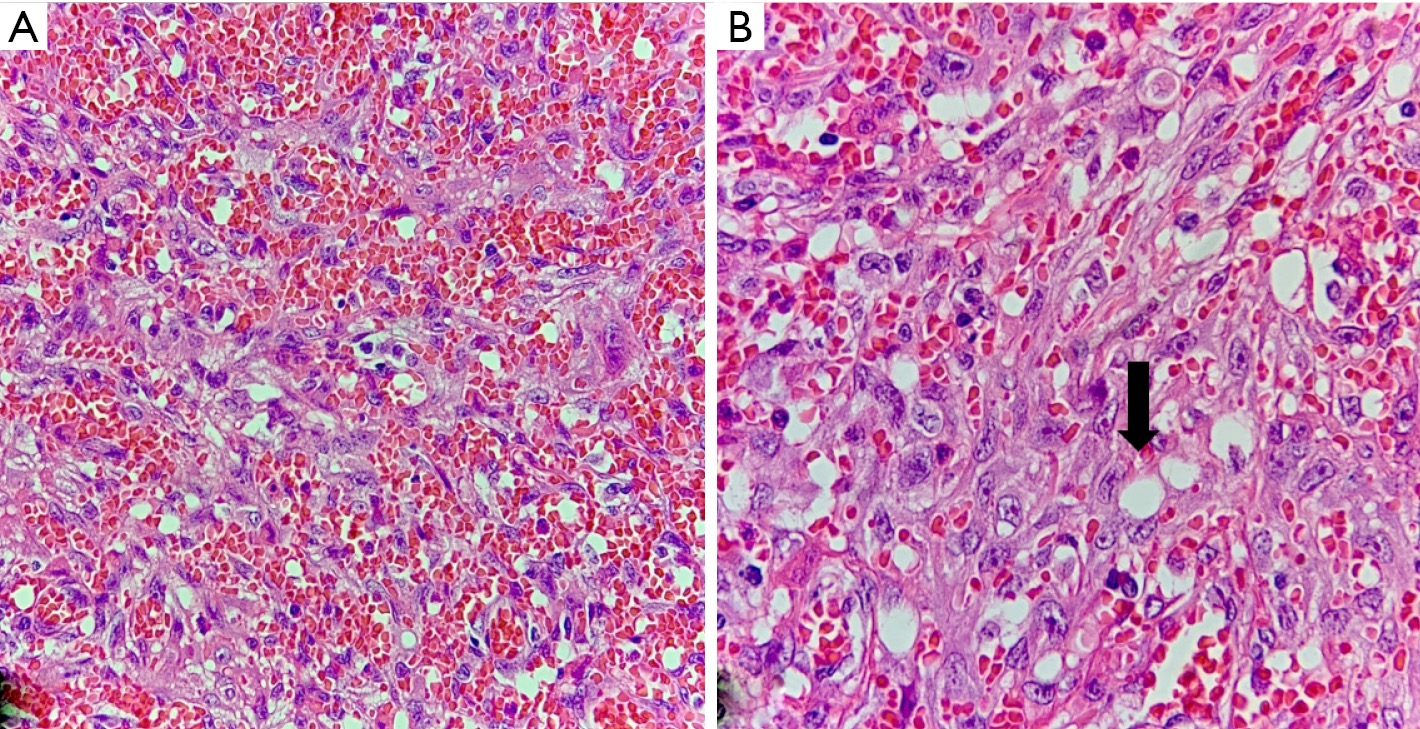 The case described above is a rare variant of SCC in the penis, which mimics an angiosarcoma, requiring careful histological evaluation and immunohistochemical study for correct diagnosis. The microscopic findings of this case are similar to those described in a study in which complex anastomosed labyrinthine channels lined with polygonal or flattened cells were observed, and the pseudo lumen containing occasional tumor cells and red blood cells (9). Cells covering these channels were positive for AE1/AE3 and negative for CD31 and CD 34. In this case report it was observed that the degree of morbidity and mortality of angiosarcomatous SCC is higher than in other variants of SCC, probably due to its anaplastic nature, demonstrating high rates of early recurrence and metastases. These findings were also observed in a report of two cases of pseudoangiosarcomatous squamous cell carcinoma that affected the vulva (9). According to a literature review in which 12 studies were included, with a total of 19 patients, eight of these had regional lymph node metastasis, and 10 died of lung metastasis (8). The case presented in this report showed invasion of the corpus spongiosum, corpus cavernosum, urethra and scrotum, with lymph node metastasis, demonstrating the aggressive behavior of this tumor and the need for early diagnosis and radical treatment.

Although this is the first case described of penile angiosarcomatous squamous cell carcinoma, which limits the comparison of prognosis with other cases, it could be observed that this was an aggressive case, with scrotal sac skin invasion and lymph node metastases.

The above report is an atypical presentation of an HPV-negative advanced penile squamous cell carcinoma with aggressive lymph node metastasis. Further studies to assess the association of this finding with a worse prognosis are needed.

Reporting Checklist: The authors have completed the CARE reporting checklist. Available at http://dx.doi.org/10.21037/tau-20-1234

Conflicts of Interest: All authors have completed the ICMJE uniform disclosure form (available at http://dx.doi.org/10.21037/tau-20-1234). The authors have no conflicts of interest to declare.