Urinary incontinence (UI) is a problem affecting adult women worldwide. Approximately 30.9% of women aged 20 or older in China have experienced UI, with stress urinary incontinence (SUI) being the most common type (1). The U.S. reported that the prevalence of UI among women aged 30–90 was 45% (2), while the prevalence of UI among women aged ≥18 years in four European countries was reported as 35%. These data suggest that the condition seriously affects women’s quality of life (3). SUI can cause psychological and social problems, such as depression, social loneliness, reduced self-confidence, family disharmony, and other related health problems, and it has become one of the most important chronic diseases affecting public health (4).

Although pregnancy and childbirth history are considered independent risk factors for UI, other risk factors include post-menopausal status, obesity, and pelvic surgery. Most studies on UI have been mainly based on postpartum women, but SUI also occurs in non-fertile young women.

A retrospective survey, via interviews, was conducted on 922 nulliparous women who received health examinations at the First Affiliated Hospital of Nanjing Medical University between July 2017 and December 2019. Questions regarding stress (“Do you leak urine with activities such as coughing, sneezing, or running?”) was used to determine participant eligibility. Also, symptoms of urge incontinence (“Does urine leak when you rush/hurry to the toilet?”) should be excluded. Only participants predominantly suffering from SUI were recruited. The women were divided into two groups: those with SUI (n=87) and those without (n=835). All patients provided standardized information (age, height, weight, etc.) and gave informed consent. Pelvic floor electrical physiological parameters were collected and analyzed.

All statistical analyses were performed using Stata version 17.0. Data were analyzed using descriptive statistics and multivariate logistic regression. Measurement data conforming to the normal distribution were expressed as the mean and standard deviation, and comparisons were made by t-test. Odds ratios (ORs) and 95% confidence intervals were calculated. All tests were two sided, with P<0.05 considered statistically significant. 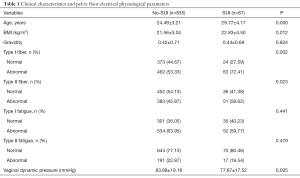 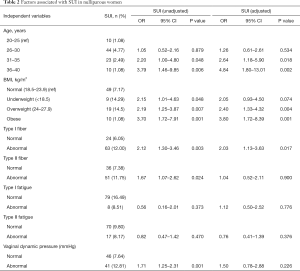 UI, which is one of the main diseases affecting humankind, occurs twice as often in women as in men and is more common as women get older (7). SUI is the most common subtype of UI. Common risk factors for UI are post-menopausal status, pregnancy, and childbirth history (8). Many studies have suggested that SUI is found almost exclusively in elderly women and women who have given birth, but epidemiological studies have reported that younger women and nulliparous women also experience UI episodes (9) and that the risk factors are therefore unknown.

The prevalence of UI subtypes has been reported as ranging between 6.2% and 42.2% in young women (10-14). However, previous studies only focused on young sportswomen with SUI (9,15). The results of the present study identified that the prevalence of SUI in 922 nulliparous women was 10.42%. In recent studies, age has been found to be a strong risk factor for SUI. The present study also found that the incidence of SUI increased with age, particularly above the age of 30 in nulliparous women [the same results were reported in Nygaard’s study (2)]. However, in the 26–30 age group, the risk of SUI was not significantly increased compared to that of the 20–25 age group (OR 1.05, P=0.879). Minassian et al. (16) found that SUI was most prevalent at around 40 years of age, whereas the present study suggests that the risk of SUI between 36 and 40 years of age is highest.

Obesity is a well-known risk factor for SUI and may be associated with increased intra-abdominal pressure. As shown in the present study, women with BMI ≥24 had a higher risk of SUI. However, underweight nulliparous women also had a higher risk of SUI: the odds ratios showed differences with women with normal BMI (OR 2.15, P=0.048). Therefore, for nulliparous women, maintaining a healthy weight is an effective way of preventing SUI. Most studies have also emphasized that weight loss is the first-line recommendation for all UI subtypes (17).

In recent years, the application of electrophysiological technology has become the focus of the diagnosis of female pelvic floor disease. Pelvic floor surface electromyography can detect abnormalities in the pelvic floor of women, thereby enabling early detection and prevention of pelvic floor disease. However, the current research on UI in non-fertile women is mainly based on epidemiological investigations, and there are few studies on pelvic floor electrical physiological parameters. The present study found that there were greater abnormalities in the type I and type II muscle fibers of women with SUI than in those with no SUI (P=0.002 and 0.023). Nulliparous women with SUI were also found to have lower vaginal dynamic pressure than those with no SUI, which was also found by Shishido et al. (18).

This study is a retrospective study and has some limitations. The relationships between occupation, exercise habits, eating habits, chronic diseases, urinary incontinence, and pelvic floor electrical physiological parameters were not addressed. Further, due to time limitations, quality of life was not analyzed. In future research, the research plan will be improved and the sample size expanded to obtain more pelvic floor data for nulliparous women, thereby providing better evidence-based medical recommendations for clinical practice.

The authors wish to express their sincere gratitude to all investigators who have actively participated in this study: Department of Obstetrics & Gynecology, The First Affiliated Hospital of Nanjing Medical University (study design, investigation, and data collection): Danhua Pu, Lin li, Yanfang Zhang.

Reporting Checklist: The authors have completed the STROBE reporting checklist. Available at http://dx.doi.org/10.21037/tau-20-1235

Conflicts of Interest: All authors have completed the ICMJE uniform disclosure form (available at http://dx.doi.org/10.21037/tau-20-1235). The authors have no conflicts of interest to declare.

Ethical Statement: The authors are accountable for all aspects of the work in ensuring that questions related to the accuracy or integrity of any part of the work are appropriately investigated and resolved. This study was conducted in accordance with the Declaration of Helsinki (as revised in 2013). This study was conducted with approval from the Ethics Committee of Women’s Rehabilitation Medical Center (2014-SR-146). Written informed consent was obtained from all participants.