Primary malignant teratoma of the kidney: a rare case report and literature review

Teratomas are neoplasms composed of one or more embryonic germ layers: the ectoderm, endoderm, and mesoderm. Teratomas are the most common germ cell tumors, which commonly arise in the gonads and often occur in infancy and childhood (1). Extragonadal teratomas are seldom seen and mainly occur in the anterior mediastinum, retroperitoneum, and sacrococcygeal regions. Renal teratoma is infrequent, and malignant mass is even rarer. Teratomas are divided into benign teratoma and malignant teratoma. Skin with dermal appendages, bronchial structures, neuroglial tissue and teeth are commonly seen in teratoma. Malignant teratoma is composed of embryonic tissue, mainly neural tissue or contains a malignant component of a type typically encountered in other organs and tissues, e.g., sarcomas and carcinomas. According to literature reviews, there is no more than 30 cases of renal teratomas and less than 10 renal malignant teratomas have been sporadically reported to date. Experience in the diagnosis and treatment of this rare malignancy is seriously limited. Therefore, we present a case of renal malignant teratoma in a 64-year-old female patient and review the related literature.

We present the following article in accordance with the CARE reporting checklist (available at http://dx.doi.org/10.21037/tau-21-97).

The patient was a 64-year-old female. She complained of right flank pain for 4 months; the pain was intermittent and spontaneous recurrent without obvious cause. She denied gross hematuria, palpable mass, and emaciation. She had no symptoms of carcinoid syndrome. Aside from hypertension, she had no other previous medical history. General physical examination revealed a slight percussion pain in the right renal region and there was no palpable mass in the abdominal region. The biochemical variables and the routine blood were normal. Computed tomography (CT) revealed a hypodense mass (50 mm in maximum diameter) with slow contrast enhancement and obscure boundary located in the lower pole of the right kidney. CT also displayed multiple retroperitoneal lymphadenectasis (Figure 1). An abnormal uptake of fluorodeoxyglucose (FDG) was observed in the low pole of the right kidney by positron emission tomography (PET). Consequently, malignant renal mass was diagnosed, with multiple para-aortic lymph node metastases. All procedures performed in studies involving human participants were in accordance with the ethical standards of the institutional and/or national research committee(s) and with the Helsinki Declaration (as revised in 2013). Written informed consent was obtained from the family members of the patient for publication of this report and any accompanying images. 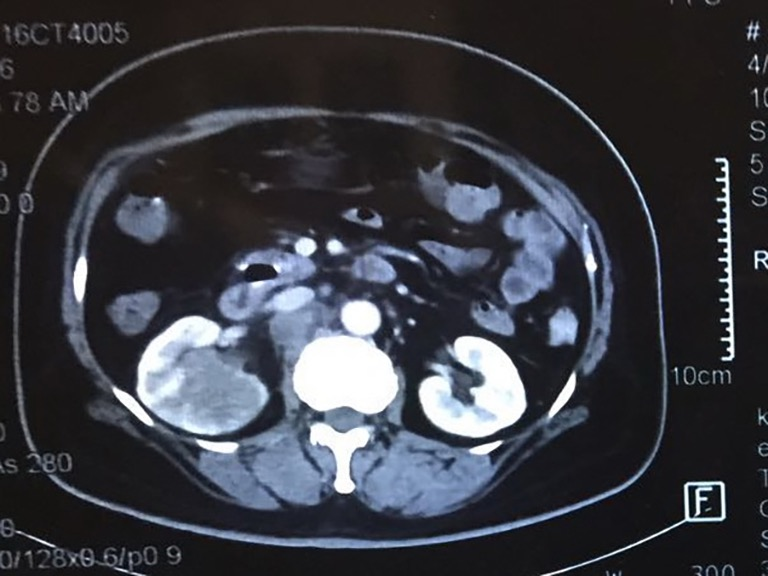 Figure 1 CT features of a location in the right kidney. CT scan shows a hypodense mass, 50 mm in diameter, with slow contrast enhancement located in the lower pole of the right kidney and lymphadenopathy in the retroperitoneum.

Macroscopically, the mass was located in the mid and lower poles of the right kidney, and measured approximately 50 mm × 50 mm × 30 mm (Figure 2). The cut surface showed an off-white color with moderate hardness. The renal mass with obscure boundary seemed to have an aggressive ability. 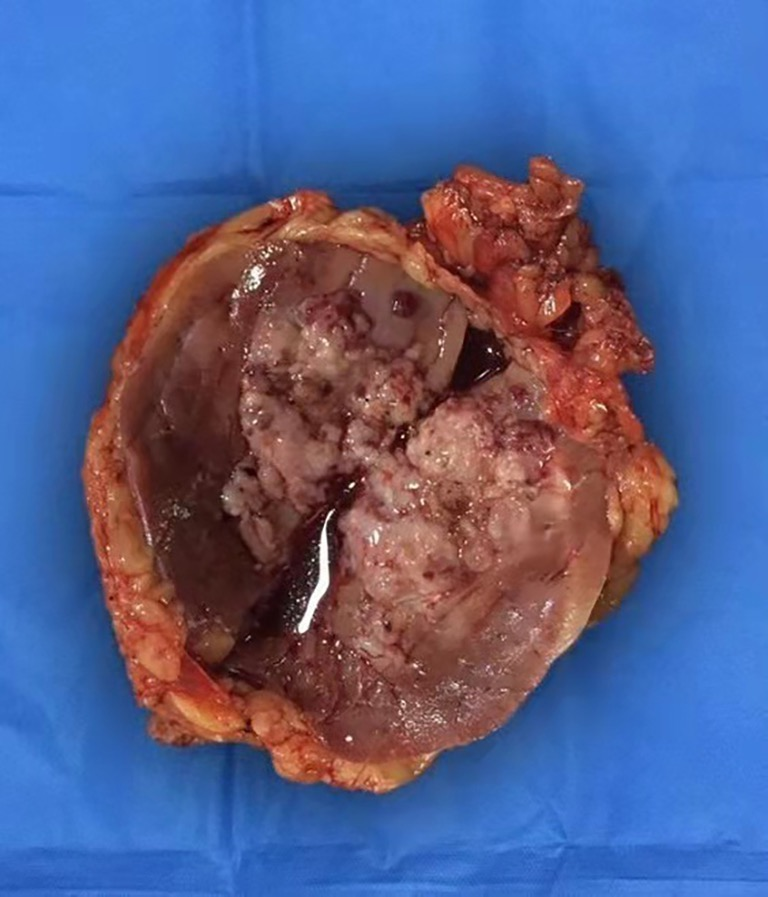 Postoperative recovery of the patient was uneventful and the patient was discharged 5 days after surgery. Due to the extreme rarity of renal malignant teratoma, there is no uniform consensus regarding adjuvant treatment. In this case, given the multiple lymph node metastases, post-operative adjuvant chemotherapy was administered with BEP (bleomycin, etoposide, and cisplatin) protocol, which was extrapolated from the guidelines for ovarian malignant germ cells tumors. The patient received three courses of chemotherapy with an interval of 2 weeks. No serious adverse event was observed and routine laboratory tests were normal. However, abdominal wall metastatic nodules and retroperitoneal lymph nodes were detected by abdominal CT at 3 months postoperatively. At the 6-month follow-up, pulmonary and liver metastases were revealed by CT and the patient refused any further treatment. Unfortunately, the patient died at 16 months postoperatively.

Teratomas are rare neoplasms that most commonly occur in the gonads (ovaries and testes). They are also typically found in the anterior mediastinum, retroperitoneum, and sacrococcygeal regions, as well as in the central nervous system, but have relatively rare (incidence 5%) in other systems, such as abdominal organs (2,3). The kidney is one of the least common sites of teratomas. This peculiar distribution is probably due to the arrest of primitive germ cells during their migration from the yolk sac to the genital ridge. The proximity of the genital ridge to the nephrogenic anlage may explain how germ cells could be displaced into the kidney (2).

Primary renal teratoma was first reported by McCurdy in 1934 (4) as an extremely rare tumor. At present, less than 30 cases can be found in a MEDLINE search, and there are very few reports regarding malignant teratomas of the kidney (5). The clinical characteristics, pathological features, and relevant information of most renal malignant teratomas are listed in Table 1. As shown in Table 1, only one case of an adult patient was reported, and our patient should be the oldest one. Some reports focused on the surgery and pathologic features, and few reports concerned the postoperative adjuvant treatment protocol. 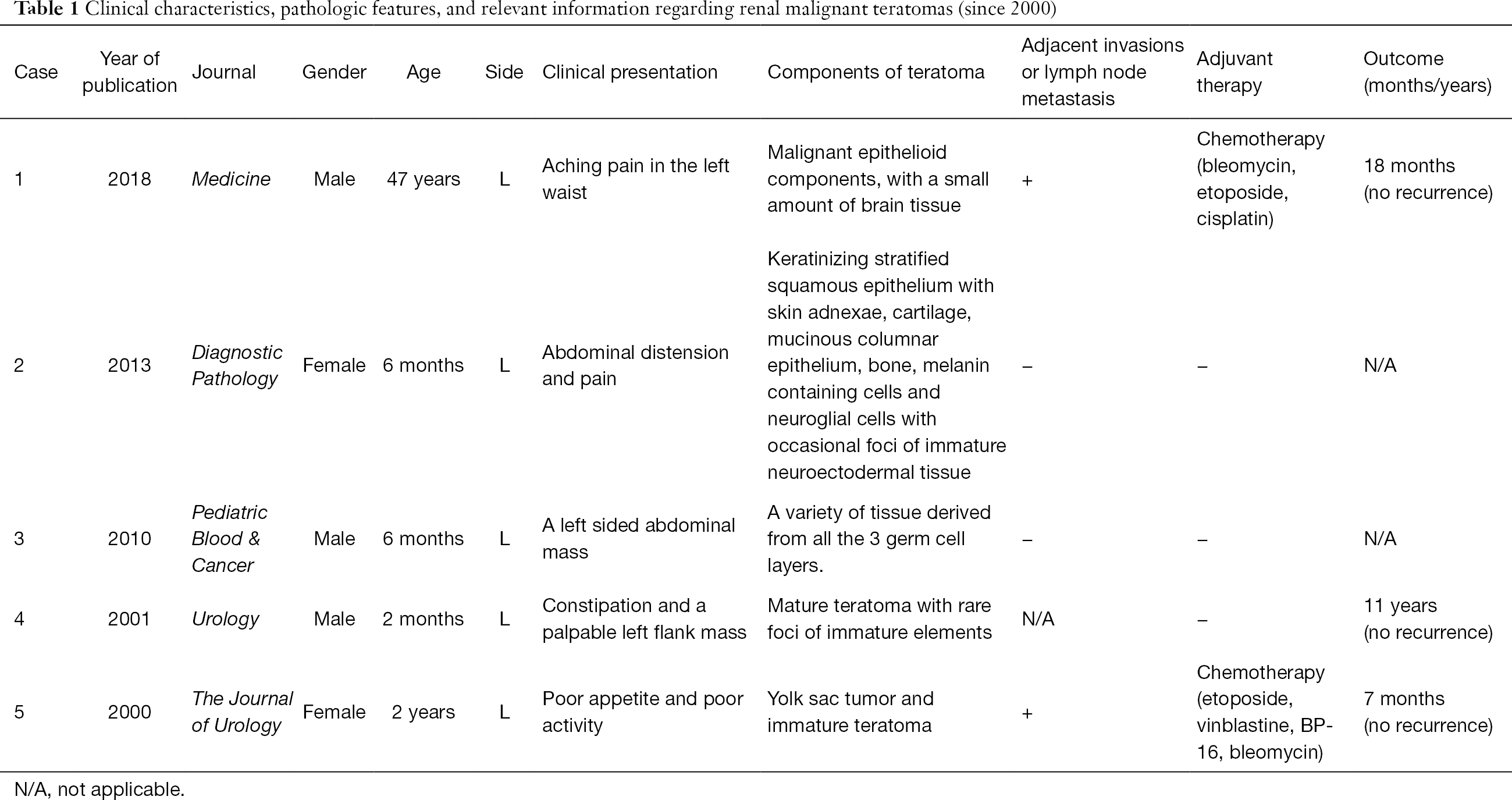 It is difficult to make a definitive diagnosis before surgery. There are neither specific symptoms and signs, nor special presentations in imaging and biochemical tests for the diagnosis of primary renal malignant teratoma. Clinical symptoms could include an abdominal mass, abdominal pain, abdominal discomfort, hematuria, anorexia, vomiting, and constipation (6). These symptoms and signs are not helpful for differential diagnosis from other renal cell carcinomas. On radiological evaluation, such as ultrasonography, CT, and magnetic resonance imaging (MRI), the features of primary renal malignant teratoma are also similar to other renal cell carcinomas. In the literature, heterogeneous masses, sometimes with cystic areas and coarse foci of calcifications or necrosis can be observed in imaging, however none of these has diagnostic significance. Hence, the diagnosis of primary renal malignant teratoma is mainly based on pathological tests combined with immunohistochemistry (IHC).

Pathologically, there are several characteristics of malignant renal teratomas. Beckwith (7) has reported two criteria for this tumor: (I) the primary tumor should be unequivocally of intrarenal origin; the entire lesion should be contained within the renal capsule and there should be no teratomas in remote sites that might have metastasized to the kidney; and (II) the tumor should exhibit unequivocal heterotopic organogenesis. When a teratoma contains a type of malignant component typically encountered in other organs and tissues, such as sarcomas or carcinomas, it is known as a teratoma with somatic type malignancies (8). In our case, the tumor had neuroglial tissue elements and carcinoma elements, and satisfied Beckwith’s criteria. Thus, the diagnosis of renal malignant teratoma is accurate. Malignant teratomas have a strong resemblance to small, blue, round cell tumors, which commonly include Wilm’s tumor, metanephric adenoma, lymphoma, peripheral neuroectodermal tumor, rhabdomyosarcoma, and rare metastatic small cell tumors from the lung (9,10). Therefore, the diagnosis and differential diagnosis of malignant teratoma is especially difficult when the tumor contains various heterogeneous elements, which is also the main reason for its misdiagnosis.

Due to the rare incidence of renal malignant teratoma, there remains a lack of treatment consensus and standardized protocol. Radical nephrectomy is considered the first choice for treatment, however the clinical benefit of adjuvant chemotherapy with BEP regimen is controversial. In fact, there was no improved survival benefit with respect to adjuvant chemotherapy in our case. Therefore, further investigations regarding treatment regimes are needed. Prognosis in this rare entity is uncertain till now. Among 3 cases with survival reported in table 1, adjacent invasions or lymph node metastases occurred in 2 patients who received adjuvant chemotherapy postoperatively. Though there was no recurrence or metastasis in these 2 patients, follow-up was only 18 and 7 months respectively. As for the other case whose survival time arrived up to 11 years, the tumor was mature teratoma with rare foci of immature elements and without lymph node metastasis. We should be aware that renal malignant teratoma is a rare malignancy with an aggressive ability and poor prognosis, and early detection and surgical intervention is critical.

Although primary renal malignant teratoma is extremely rare, this kind of tumor should be taken into consideration. Such rare and challenging cases should be referred to an experienced pathologist for confirmation of histopathological diagnosis. In addition, there is currently no therapeutic standard consensus for this disease and the prognosis remains unclear. Early detection and surgical intervention are critical, and more research regarding postoperative adjuvant therapy should be conducted.

Funding: This research was funded by the National Natural Science Foundation of China (Grant number 81972494) and the Practice Project on the Production, Study and Research for University Teachers in Shanghai (RC20200042)

Reporting Checklist: The authors have completed the CARE reporting checklist. Available at http://dx.doi.org/10.21037/tau-21-97

Conflicts of Interest: All authors have completed the ICMJE uniform disclosure form (available at http://dx.doi.org/10.21037/tau-21-97). The authors have no conflicts of interest to declare.

Ethical Statement: The authors are accountable for all aspects of the work in ensuring that questions related to the accuracy or integrity of any part of the work are appropriately investigated and resolved. All procedures performed in studies involving human participants were in accordance with the ethical standards of the institutional and/or national research committee(s) and with the Helsinki Declaration (as revised in 2013). Written informed consent was obtained from the family members of the patient for publication of this report and any accompanying images.