Expression of G3BP1 in benign and malignant human prostate tissues

Prostate cancer (PCa) is a leading type of cancer in men worldwide. According to the Global Burden of Disease Cancer, PCa is the highest incidence for men in 92 countries, and the leading cause of cancer deaths for men in 48 countries (1). In the United States, it is estimated that one in every nine men will be diagnosed with the disease during his lifetime (2).

Androgen receptor (AR) plays a central role in the initiation and progression of PCa. To date, androgen deprivation therapy (ADT) is the primary treatment for PCa to inhibits AR signaling. AR is the key driver of PCa progression and the main target for metastatic PCa treatment. Considering the reliance of PCa on AR, it is essential to identify AR-related genes involved in prostate tumor metastases.

RNA-binding proteins (RBPs) play an essential role in the regulation of gene expression (3). As a member of the RBP family, GTPase-activating protein SH3 domain-binding protein 1 (G3BP1) may be involved in tumorigenesis and development by interacting with its target mRNA (4). For example, some cancer related genes include c-MYC (5), CTNNB1 (6) and PMP22 (7) have been proved to be regulated by G3BP1. Early studies have shown that G3BP1 is overexpressed in many tumors (8-10). However, there are relatively few studies regarding G3BP1 in PCa.

In this study, we reported the first study of G3BP1 in PCa. G3BP1 was highly expressed in PCa, and its expression is associated with tumor malignancy. Furthermore, G3BP1 might be closely related to AR. We present the following article in accordance with the REMARK reporting checklist (available at http://dx.doi.org/10.21037/tau-20-1450).

UALCAN (http://ualcan.path.uab.edu/) is a comprehensive, user-friendly, and interactive web resource for analyzing cancer OMICS data (11). It built on PERL-CGI with high quality graphics using JavaScript and CSS. In this study, G3BP1 was submitted to UALCAN and its mRNA expression in PRAD was explored using TCGA PRAD samples (n=497). We further compared the expression across different tumor subgroups as defined by patient age, Gleason score and nodal metastasis status.

GEPIA2 (http://gepia2.cancer-pku.cn/) is an updated version of GEPIA for analyzing the RNA sequencing expression data of 9,736 tumors and 8,587 normal samples from the TCGA and the GTEx projects, using a standard processing pipeline (12). We used GEPIA2 to verify the correlation between G3BP1 and AR mRNA expression. Three expression datasets (PRAD tumor, PRAD normal, prostate in GTEx) were used, and correlation coefficient (r) and P value were calculated by Pearson’s correlation analysis (R=0.64, P value =0)

Patients were identified from a population of men with PCa treated at the Second Hospital of Tianjin Medical University between 2016 and 2019. The study was conducted in accordance with the Declaration of Helsinki (as revised in 2013). The study was approved by the Institutional Review Board of the Second Hospital of Tianjin Medical University (No. KY2019K036) and individual consent for this retrospective analysis was waived. These samples were used for immunohistochemistry (IHC) analysis. Clinical parameters including age, serum PSA, Gleason grade and metastasis states were collected. The clinical and pathological factors of all patients were shown in Table 1. 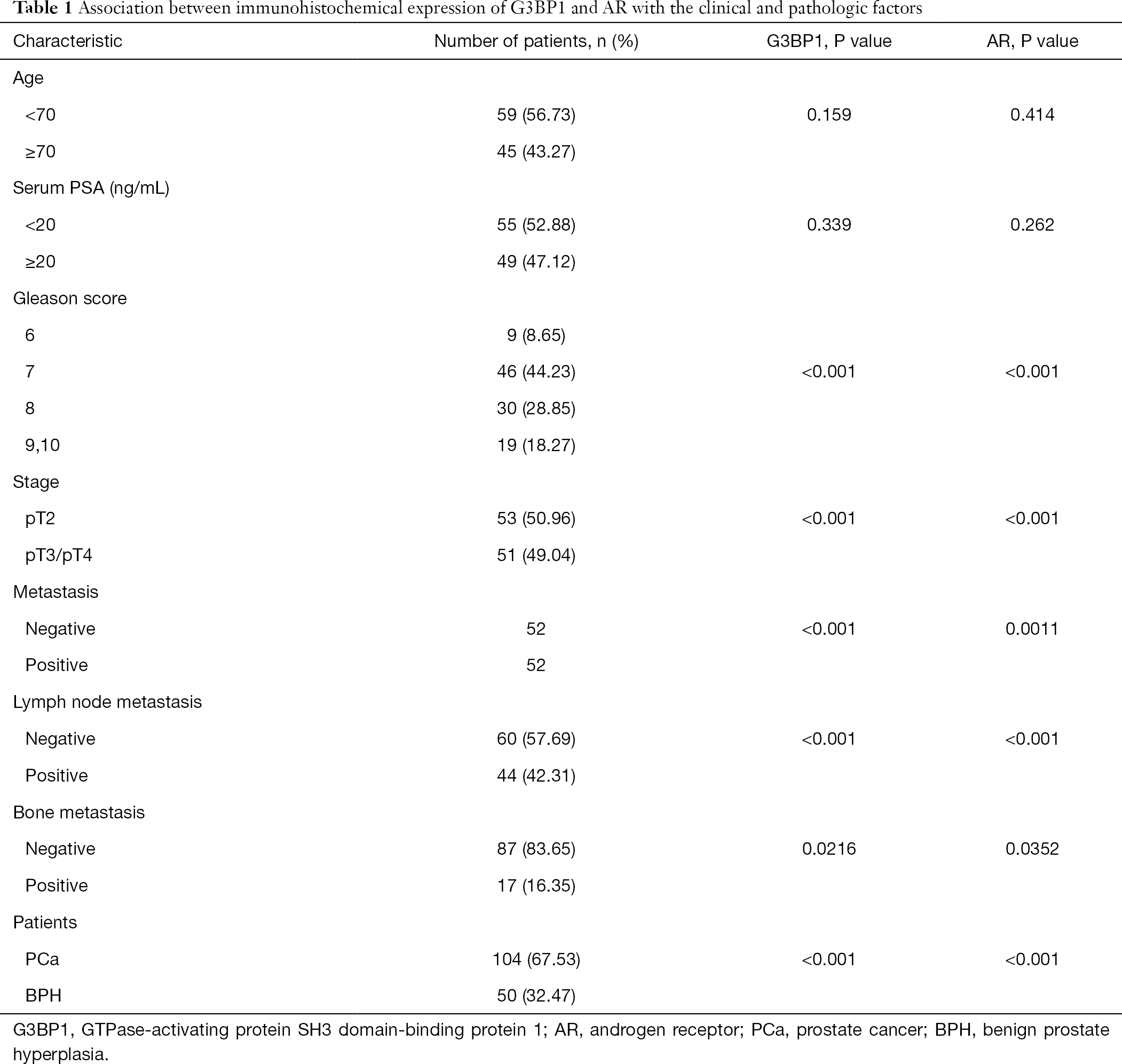 Because the data were not normally distributed, non-parametric statistical methods were used. For IHC, different groups were performed with Mann-Whitney test. Correlation between G3BP1 and AR was performed with Spearman’s rho correlation. For biochemical recurrence-free survival (BRFS), P values were calculated using the log-rank (Mantel-Cox) test. In all tests, P<0.05 was taken as the significance limit. All statistical tests were calculated using the SPSS version 21.0 (SPSS Inc.) and GraphPad Prism 8.0 (GraphPad).

As a first step in analyzing the expression pattern of G3BP1 in PCa, we analyzed G3BP1 in PRAD patients by UALCAN. UALCAN analysis further showed that the RNA expression level of G3BP1 up-regulated significantly in primary tumor compared with the normal as shown in Figure 1A (P<0.001). Besides, it was found that G3BP1 expression was associated with Gleason score (Figure 1B) and nodal metastasis (Figure 1C), while there was no association with age (Figure 1D). A more detailed analysis between different Gleason score groups is presented in Table S1. Thus, the expression level of G3BP1 may be closely related to the occurrence and development of PCa. 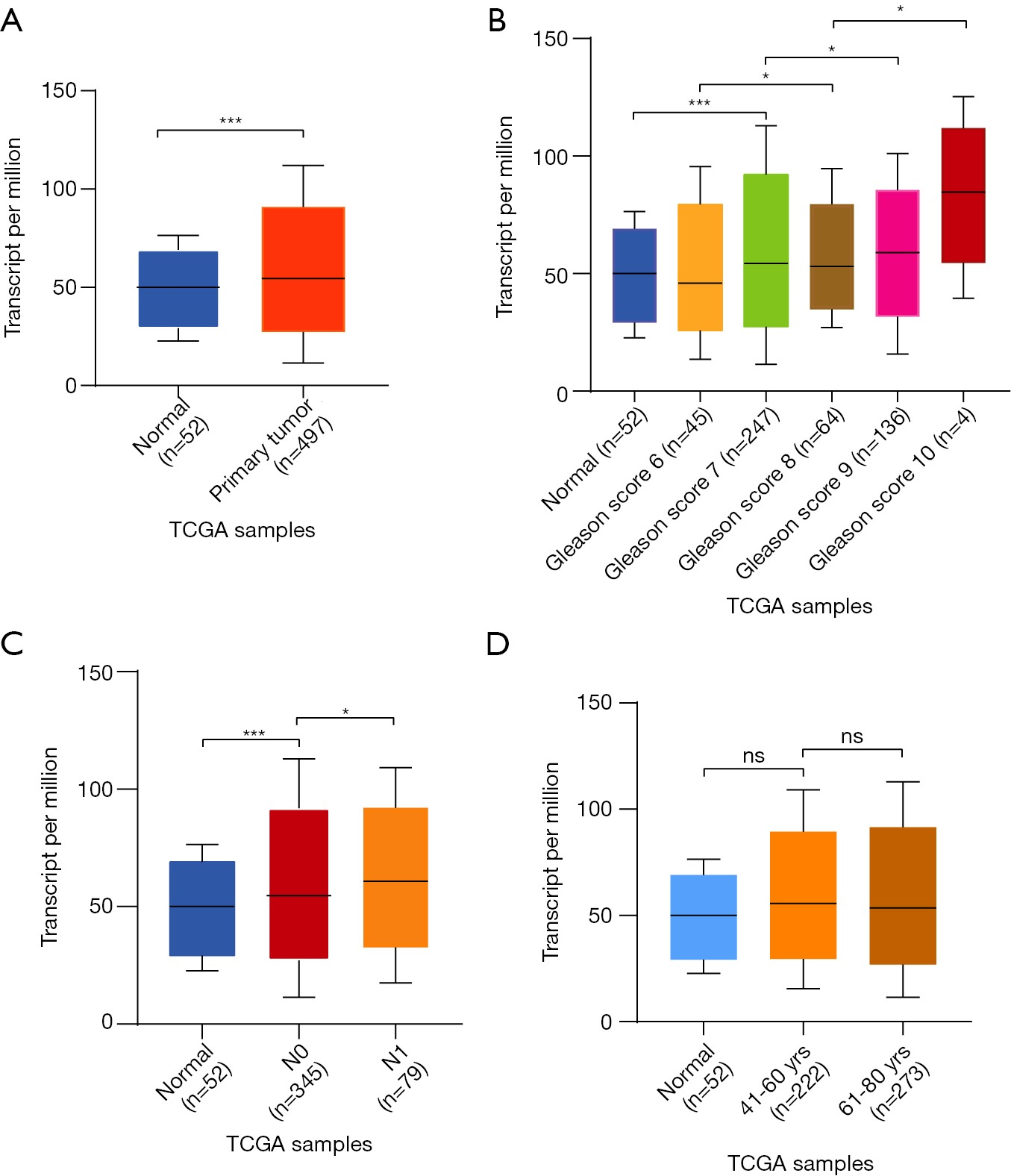 To further verify this result, we analyzed G3BP1 and AR expression by IHC staining in a panel of 104 PCa and 50 BPH samples. Similar to the results from RNA analyses, positive G3BP1 protein staining was strongly associated with PCa. Upregulation of G3BP1 expression was noticeable in PCa tissue compared with the BPH tissue (Figure 2A). Moreover, G3BP1 expression significantly correlated with both Gleason score (Figure 2B) and pT stage (Figure 2C), as well as AR (Figure 2D,E). 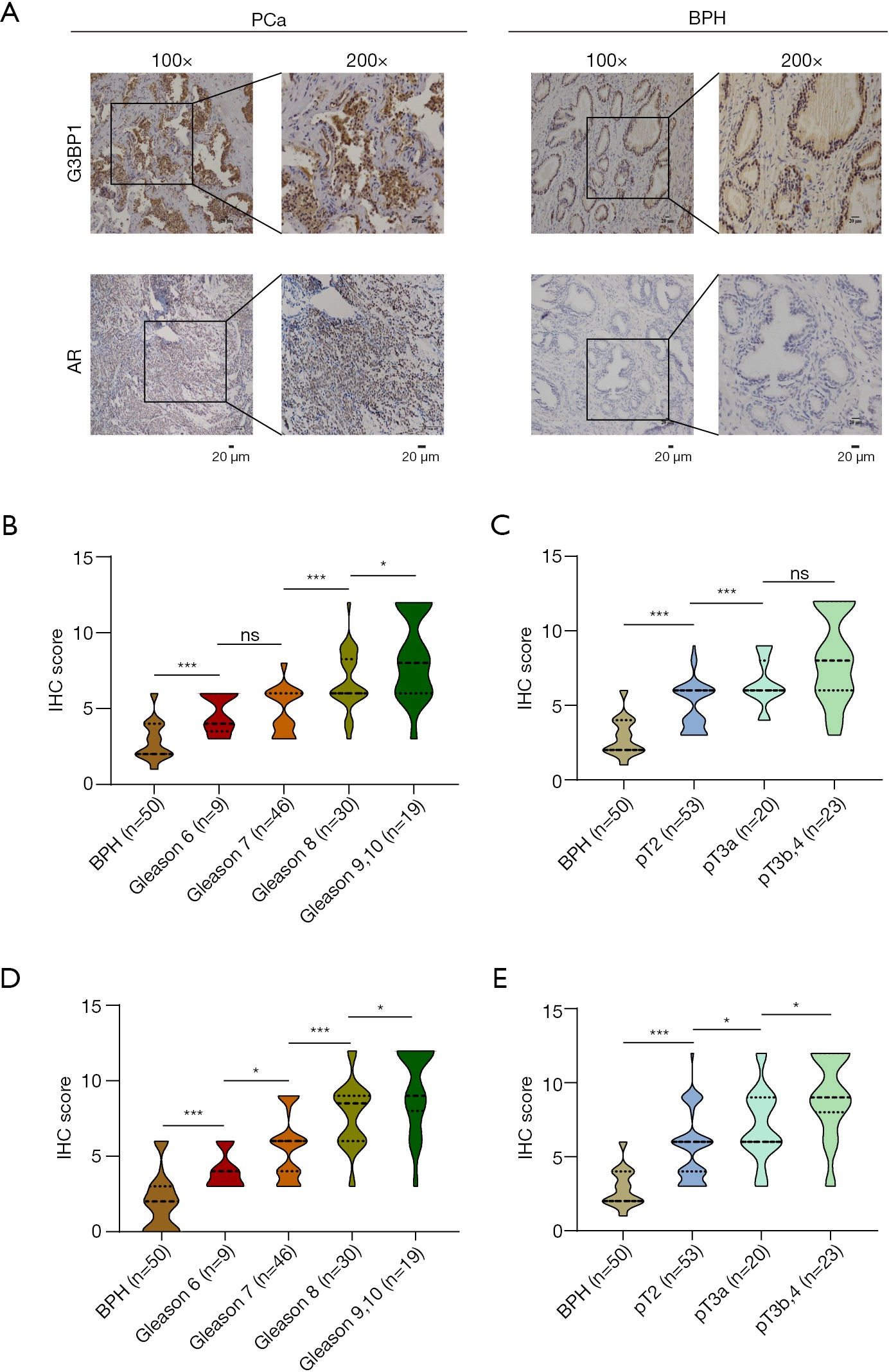 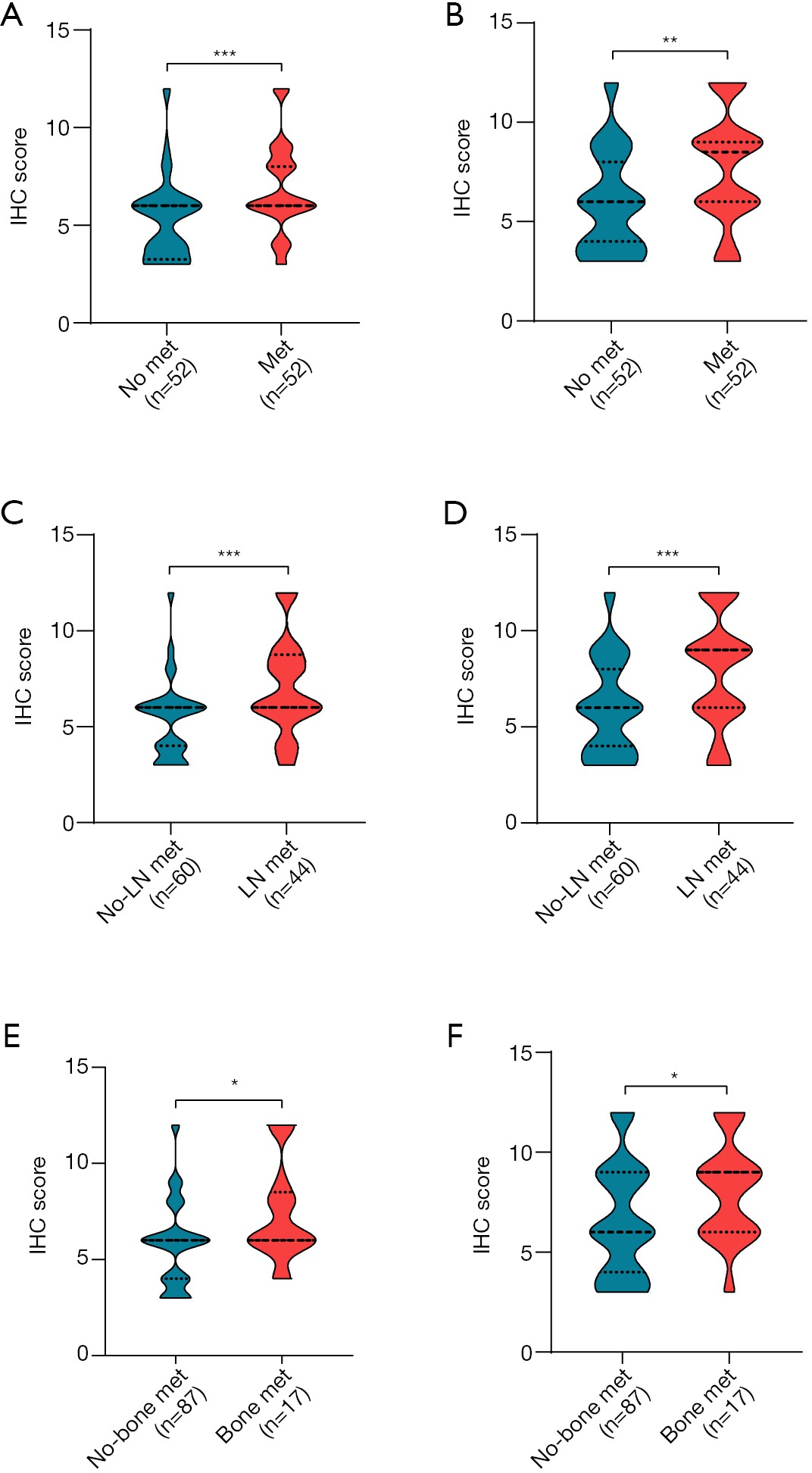 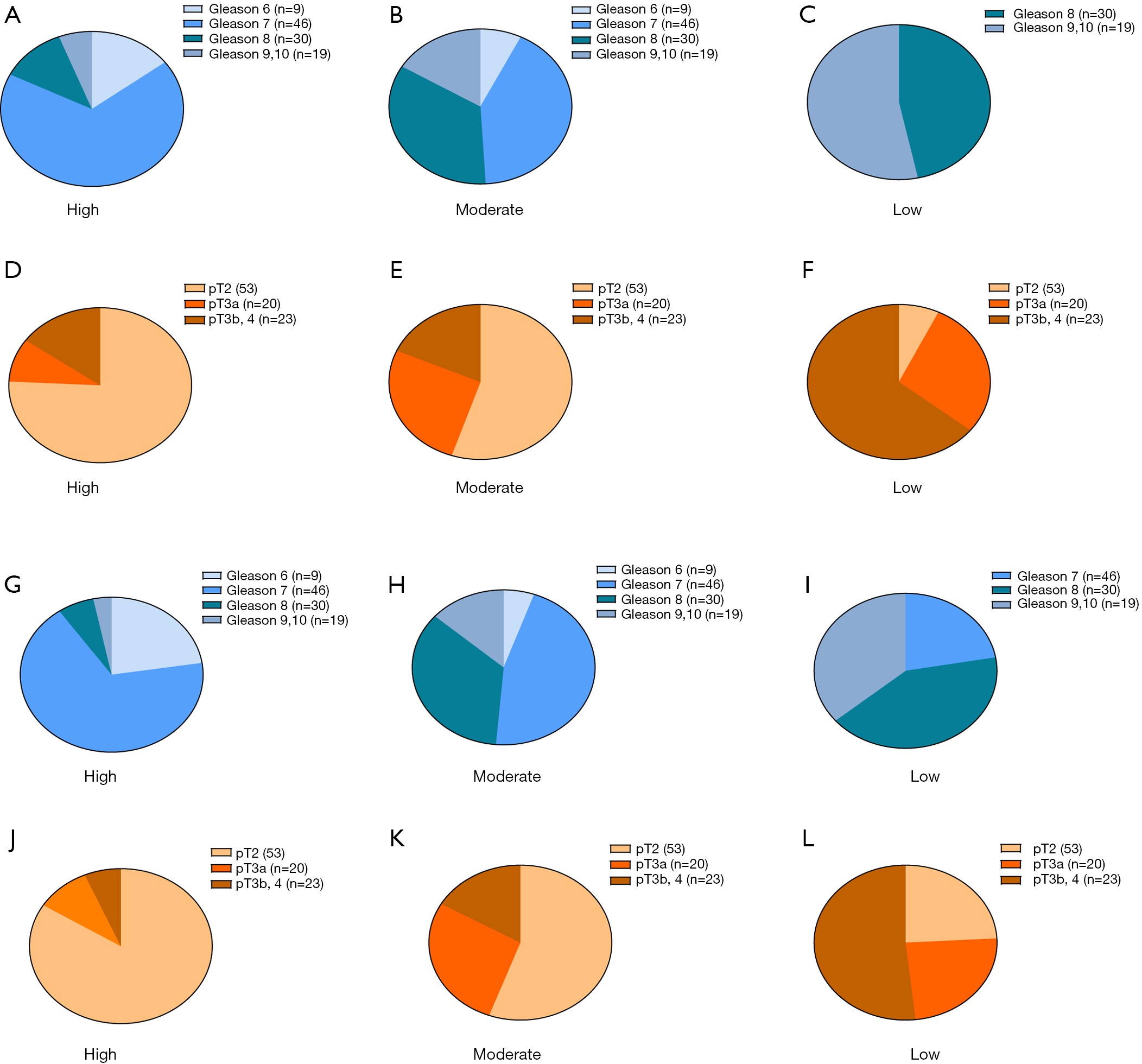 The relationship between G3BP1 and AR

We inferred that there is some correlation between G3BP1 and AR. The results of IHC confirmed our conjecture (Spearman correlation r=0.468, P<0.001, Figure 5A). Further analyses of PCa patients from the GEPIA2 database revealed a positive correlation between G3BP1and AR mRNA (Person-correlation r=0.64) (Figure 5B). Next, we constructed the G3BP1 knockdown stable cell lines in LNCaP cells. We found that the downregulation of G3BP1 affected AR expression levels (Figure 5C). Although further work is required, these data indicate that G3BP1 is indeed closely related to AR.

Figure 5 The correlation of G3BP1 and AR expression. The analysis by IHC staining (A) and GEPIA2 (B) showed G3BP1 was highly correlated with AR. P values were for Spearman correlation tests. (C) the expression of AR and G3BP1 in G3BP1-depleted LNCaP cells were detected by western blot. G3BP1, GTPase-activating protein SH3 domain-binding protein 1; AR, androgen receptor; IHC, immunohistochemistry.

We next examined the significance of G3BP1 expression on biochemical recurrence by following up 93 patients (Figure 6). Recurrence-free survival was measured from the time of surgery to disease recurrence or death. We classified patients into high and low expression based on the median value. Although, the difference between low and high expression groups did not reach statistical significance, there was a strong trend towards a difference (P=0.1055). We suspected that this might be related to the small sample size and the short follow-up period. 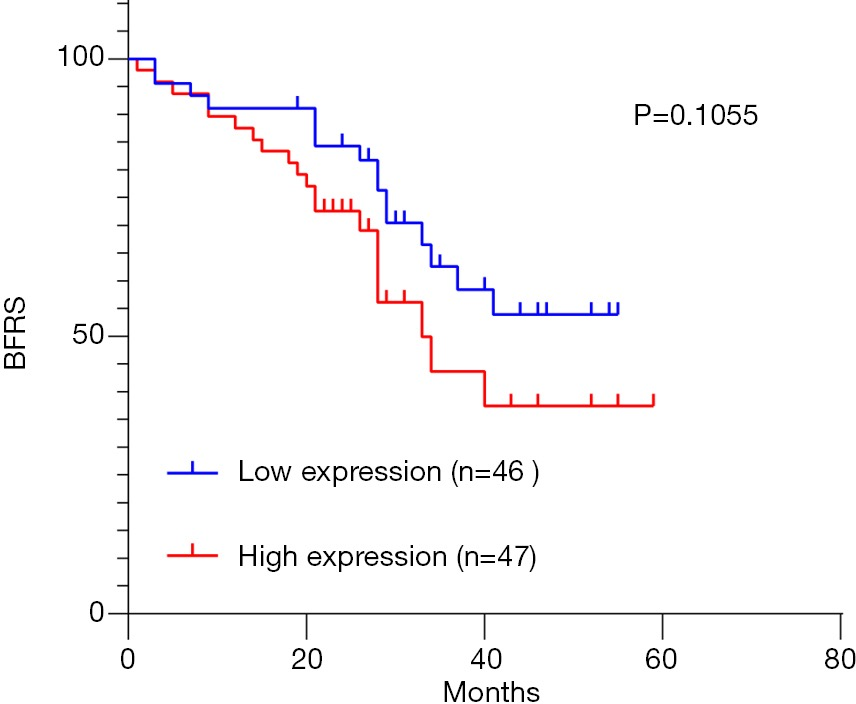 PCa has been the most common cancer among men in Western countries (13). Despite extensive studies, the fundamental mechanisms responsible for the development and progression of PCa have not yet been fully elucidated. Here we provide a new mechanistic link between G3BP1 and AR, which may be involved in the occurrence and development of PCa.

The primary objective of our study was to examine the expression of G3BP1 in PCa. In this work, we presented evidence that G3BP1 was frequently upregulated in PCa samples, in accordance with G3BP1 in other cancers. Statistical analysis revealed that high expression of G3BP1 was correlated with tumor malignancy. Indeed, our findings indicated that high G3BP1 expression might be predictive of biochemical recurrence. Meanwhile, metastatic PCa represents a small, but clinically significant, proportion of all PCa cases. The finding that G3BP1 was strongly associated with metastasis might provide a new target for metastatic PCa.

AR expression has been found in almost all primary and metastatic PCa, regardless of stage or grade (14). AR signaling remains active and supports the survival and growth of PCa cells. Understanding how AR-regulated genes promote tumor metastasis and targeting critical AR-regulated signaling pathways in lethal metastatic PCa may be a promising future for drug development. Given the change of AR expression following G3BP1 knockdown, we predict G3BP1 associates with AR and may serve as an upstream regulatory mechanism. Considering that G3BP1 belongs to RNA binding proteins and can influence mRNA stability (15,16), we suppose G3BP1 may regulate AR expression, but the concrete mechanism remains to be further studied.

One of the limitations of this study is that the median follow-up period of 27 months was relatively short in considering the long natural history of PCa. Moreover, as we have described, the sample size is relatively small. Future studies should increase the sample size and follow the patients during their entire lifespan to confirm our findings. On the other hand, the research evidence remains insufficient, and the proposed mechanisms are superficial, warranting deeper empirical studies.

In conclusion, we found that G3BP1 was frequently upregulated in PCa and closely related to AR expression and tumor metastasis. These results supply a potential target for the management of the PCa.

We would like to thank the researchers and study participants for their contributions. We are very thankful to Mr. Saravanan Subramanian for carefully reading and polishing the manuscript.

Reporting Checklist: The authors have completed the REMARK reporting checklist. Available at http://dx.doi.org/10.21037/tau-20-1450

Conflicts of Interest: All authors have completed the ICMJE uniform disclosure form (available at http://dx.doi.org/10.21037/tau-20-1450). The authors have no conflicts of interest to declare.

Ethical Statement: The authors are accountable for all aspects of the work in ensuring that questions related to the accuracy or integrity of any part of the work are appropriately investigated and resolved. The study was conducted in accordance with the Declaration of Helsinki (as revised in 2013). The study was approved by the Institutional Review Board of the Second Hospital of Tianjin Medical University (No. KY2019K036) and individual consent for this retrospective analysis was waived.