Positive association between preoperative lymphocyte-to-monocyte ratio and risk of the status of positive surgical margins by prostate cancer: results in 497 consecutive patients treated only by radical prostatectomy

Although patients with PCa can obtain a clinical cure or a good prognosis through RP, there are still some important factors that can lead to tumor recurrence and progression.

According to previous literature reports, the incidence rate of positive surgical margins (PSM) after RP is approximately 10–35%, and PSMs are considered to be one of the most significant indicators for cancer recurrence and poor prognosis in PCa patients (3-5). Compared with patients with negative surgical margins, PSMs may not only cause tumor recurrence after surgery but also cause mental stress to PCa patients (6). Recent studies have confirmed that tumor-related inflammation affects the malignancy of tumors, including tumor proliferation and survival, angiogenesis, metastasis, and treatment response (7). In some studies, some cancer-related inflammatory indexes including neutrophil-to-lymphocyte ratio (NLR), the platelet-to-lymphocyte ratio (PLR), lymphocyte-to-monocyte ratio (LMR), and prognostic nutritional index play an important role in predicting the prognosis of different tumors, these are serum-based and not pathology review based (8-12). However, few articles reported the association between tumor-related inflammation scores and PSMs status after RP. Therefore, we performed this study to explore whether these inflammation scores can be used as important predictors to predict PSMs status. We present the following article in accordance with the STROBE reporting checklist (available at http://dx.doi.org/10.21037/tau-20-1447).

This study reviewed all patients from June 2014 to September 2020, 497 patients of PCa who underwent RP in the second hospital of Tianjin Medical University were included. The retrospective data were collected following criteria: no neoadjuvant or adjuvant treatment, distant metastasis confirmed by surgery or imaging. Excluded criteria: Patients with genetic immunodeficiency, acquired immunodeficiency syndrome, immunosuppressive drugs, and other immune deficiency diseases; patients with hematological diseases; long-term immunotherapy; patients with other malignant tumors; incomplete record. The surgical techniques for RP with or without lymph node dissection differed among patients: open RP or laparoscopic RP. Both interventions were conducted by two experienced surgical teams. The protocol for processing RP specimens was similar across sites, the remaining specimen was sectioned transversely at intervals of 3–5 mm formalin-fixed and embedding all sections for analysis. PSMs was defined as the appearance of tumor cells on the surface of the surgical specimen and were categorized into five groups based on their locations: apex, proximal (bladder neck), peripheral, focal, and multifocal. Determine the occurrence and location of positive margins based on previous studies (13). A pathologist performed all histopathological diagnoses and prepared prostate specimens using the same method during the research. Focal positive margins are considered to be only a single positive location in the surgical specimen, and multifocal positive margins are defined as more than 1 positive location in the surgical specimen. The study was conducted in accordance with the Declaration of Helsinki (as revised in 2013). The study was approved by the Regional Ethical Review Board in Tianjin medical university second hospital and individual consent for this retrospective analysis was waived.

The entire statistical process was performed with SPSS 22.0 software. Measurement values for continuous variables are expressed as the median (range). Qualitative data were expressed as a percentage (%) and analyzed by the χ2 test. The receiver operating characteristic (ROC) curve was plotted by referring to the sensitivity vs. 1-specificity of the LMR level. The areas under the curve (AUCs) and cut-off values were also calculated. Sensitivity, specificity was used to estimate the value of LMR based on the cut-off value. Univariate and multivariate logistic regression analysis was used to screen out the independent risk factors for the incidence, location of PSMs. All analyses are bilateral analysis, P<0.05 has statistical significance. 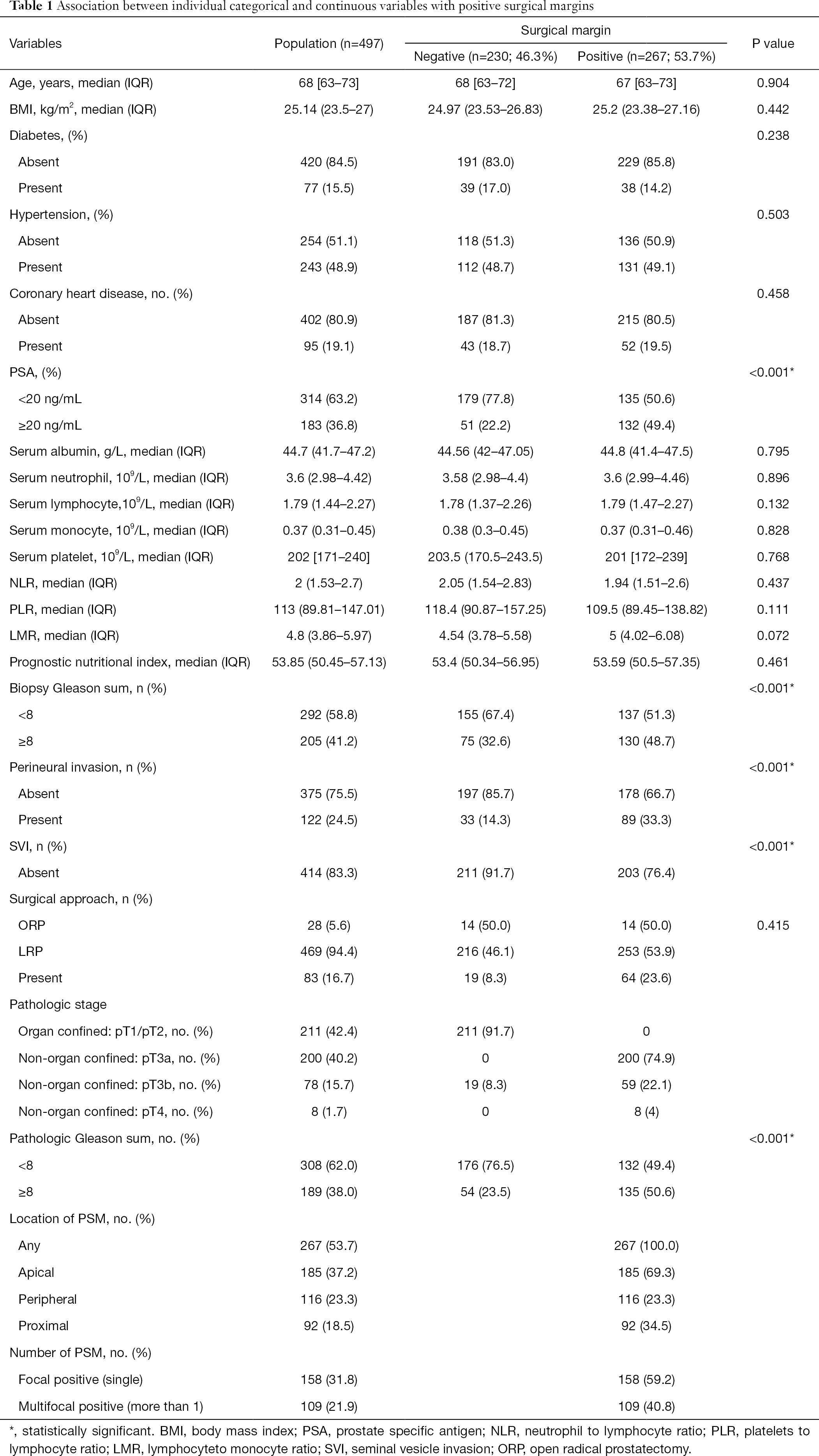 Tables 3-5 summarize clinical and pathologic features according to the location of PSMs including apex, peripheral, proximal. LMR, analyzed as a continuous variable, was shown to be an independent predictive factor for apical PSMs, with increasing BMI predicting the lower incidence of apex location (OR: 0.881; P=0.043). ROC curve indicated that a LMR of 7.01 had maximum Youden index value (Figure 1) (sensitivity =89.7%, Specificity =22%). The higher the preoperative LMR value, the lower the risk of the positive apex. Regarding peripheral PSM location, PSA (OR: 2.209; P=0.006) and perineural invasion (OR: 1.934; P=0.014) were determined to be significantly predictive factors, which predicts the incidence risk of peripheral location.

PSMs after RP is considered to be one of the important factors leading to postoperative tumor recurrence and local progression, and it is also a key factor in determining whether PCa patients should proceed with the second treatment (14). With the development of surgical techniques and instruments, the probability of PSMs after RP is decreasing. However, in high-risk PCa patients, the incidence rate of PSMs after RP remains relatively stable (15). There are two main causes for the incidence risk of PSMs, including tumor progression and the experience of the surgeon. With the development of the current surgical technique, the surgical technique of the surgeon is constantly improving. In addition to the surgical experience, the more important reason is the biological behavior of the tumor cell, which is an independent risk factor that affects the PSMs (14,16). Patel et al. performed a muti-institutional study and demonstrated that the apex of the prostate is the most common site for PSMs after robotic-assisted RP, and pathological staging and preoperative PSA are the most important independent risk factors for predicting positive margins (17). Yossepowitch et al. reported that the incidence of PSMs is strongly influenced by the surgeon’s experience irrespective of the surgical approach through evidence synthesis and they also thought PSMs are associated with a twofold increased hazard of biochemical relapse, but their association with more robust clinical endpoints is controversial (18). In our research results, we found that preoperative PSA, perineural invasion, and postoperative GS are related to the occurrence of PSMs (all P<0.001). Although there is currently no conclusion on the role of preoperative inflammatory factors in the occurrence of PSMs after RP, inflammatory indicators did have a greater impact on the prognosis of PCa. Peng et al. performed a meta-analysis in 2019 and reported that pretreatment LMR, NLR, PLR might be an effective biomarker for poor prognosis in patients with PCa (19). And Zhou et al. also suggested that LMR played a significant role in initial PCa diagnosis (20). These articles showed that LMR played an important role in the occurrence and development of PCa. In our research, we found that preoperative PSA, LMR, and postoperative perineural invasion, PGS can be used as independent factors to predict the incidence risk of PSMs after RP. And also, in terms of predicting the location of PSMs, LMR may have an inverse relationship with the apical PSMs (P=0.043). The lower the LMR before surgery, the higher the probability of apical PSMs. Shigeta et al. also showed that high monocyte count predicts poor clinical outcomes in PCa patients. This conclusion indicated that lower LMR may have a worse prognosis in PCa patients (21). At the same time, Lian et al. found that patients with apical PSMs had a higher risk of biochemical recurrence than patients with other PSMs in 2020 (22). These findings lead us to speculate that the impact of LMR on the prognosis of PCa patients may be caused by the incidence of apical PSMs after RP. However, we found that higher LMR may have a greater risk of PSMs. This is contrary to our hypothesis. The reason for this contradiction is still unclear. It may be related to the small number of the population included in this study. Besides, we also found that LMR may be used as an independent predictor of multifocal PSMs. Coelho et al. reported that the clinical stage was the only independent variable that was associated with PSM after RARP (23). They did not find a positive correlation between preoperative PSA and PSMs. Porcaro et al. collected 476 PCa patients after RP, and they also demonstrated that preoperative PSA could not be an independent factor to predict the incidence of PSMs (24). Pooli et al. published an article in 2019 and reported that age and PSA were significantly associated with PSMs rate (25). In summary, the relationship between PSA and PSM is still controversial. Jayachandran et al. discovered that obesity was associated with an increased risk of overall PSMs. They also suggested that most obese men had a higher risk of apical PSMs (26). Although Coelho et al. did not found that there was a relationship between BMI and the risk of any PSMs, they also believe that there was a statistical relationship between BMI and apical PSMs (23). Zilberman et al. thought although BMI was associated with advanced PCa, BMI did not show a correlation in the incidence rate and location of PSMs (27). In our research, we did not find an important association between BMI and incidence rate and the location of PSMs. Currently, the impact of BMI on PSMs after RP remains controversial.

There were a few limitations to our study. First, our research was a retrospective study, so some information or data may be biased. Besides, other inflammatory factors may also affect the results of the study, but we did not include these factors. Furthermore, from our research, the incidence of PSMs in our population was more than 50%, which may also be caused by the experience of the surgeon and technical limitations.

We would like to thank Tao Li and Shuai Xia for their work in the revision of this article and data extraction.

Reporting Checklist: The authors have completed the STROBE reporting checklist. Available at http://dx.doi.org/10.21037/tau-20-1447

Conflicts of Interest: All authors have completed the ICMJE uniform disclosure form (available at http://dx.doi.org/10.21037/tau-20-1447). The authors have no conflicts of interest to declare.

Ethical Statement: The authors are accountable for all aspects of the work in ensuring that questions related to the accuracy or integrity of any part of the work are appropriately investigated and resolved. The study was conducted in accordance with the Declaration of Helsinki (as revised in 2013). The study was approved by the Regional Ethical Review Board in Tianjin medical university second hospital and individual consent for this retrospective analysis was waived.